Follow
Home » Lifestyle » Fancy getting nude in a cinema full of strangers? Now you can – just BYO towel

No need to dress up in red carpet outfits for this cinema premiere. Just bring a towel.

For the first time in Australia, film festival audiences in Melbourne and Sydney are being invited to strip naked to watch special screenings of the Belgian cult hit Patrick, promoted as “a Shakespearian tragic-comedy set in nudist colony”.

“This is going to be a unique and memorable cinematic experience,” says Hudson Sowada, director of the 2021 Fantastic Film Festival Australia. “Patrick has been seen around the world, but never by a nude audience before.” 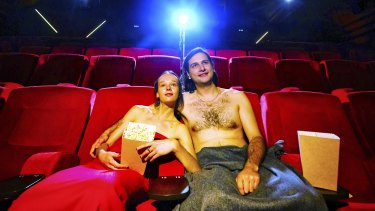 A naked Israeli audience for a performance of the 2018 French comedy Normandie nue (Nude Normandy) is the only precedent Sowada can find for this Australian first, where not only the audience will be starkers.

“I’ll introduce the film in Melbourne in my birthday suit,” Sowada explains. “Then I’ll be monitoring that everyone respects each other’s personal space.”

Does that make Sowada a nude bouncer?

“I wouldn’t use the term ‘bouncer’ specifically,” Sowada laughs. “But any anti-social behaviour will be zero tolerated.”

Naturally there are rules. Cinema-goers must come clothed to the cinema and bring a towel to sit on. Once in their seat, they’ll strip off (“at least to their undies”) and pack their clothes beside them. Photography is banned. And should any patron want to pop out for popcorn or a choc-top, they need to reclothe before venturing out to the candy bar.

Warning: several movies are called Patrick, including the 1978 Australian horror classic and a 2018 British rom-com about an adopted dog. If you fancy a night starkers with strangers, ensure you haven’t booked for versions featuring a comatose killer or a farting pug.

The Belgian Patrick, starring Kevin Janssens, is a murder mystery where everyone flaunts their floppy bits. More simpleton than stud, handyman Patrick finds himself the reluctant pot-bellied heir to a forest retreat being fought over by feral, feuding nudists with no obvious places to conceal a murder weapon. (Cluedo alert: Patrick’s missing hammer is crucial to the plot.) 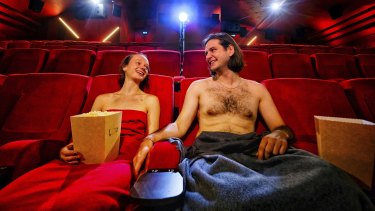 Attendees at the nude screenings of Patrick must strip down to “at least their undies” and bring a towel to sit on.Credit:Luis Enrique Ascui

Twice as many Sydneysiders have booked to be part of the naked audiences than Melburnians. Is the Victorian capital full of prudes?

“No,” Sowada insists. “It says more about Sydney’s desire to get their beach bods out.”

Both venues – Melbourne’s Lido and Sydney’s Ritz – are owned by the Tamir family which approves of “giving cinema goers a unique experience like this,” says Sowada, whose partner, actress Emily Milledge, also posed for our photo.

Kicking off last Friday in Melbourne with the Australian premiere of Prisoners of the Ghostland starring Nicholas Cage, the Fantastic Films Festival features another 20 premieres. But Patrick is attracting most attention. Though Sowada compares Patrick to Shakespeare’s Romeo and Juliet (“Capulets versus Montagues, duelling for control”), Australian audiences should prepare for The Castle – with much more male nudity.

It’s over 50 years since Alan Bates and Oliver Reed wrestled in the nude in Ken Russell’s 1969 version of D. H. Lawrence’s novel Women in Love. That was stylised, choreographed. Not so the climax of Patrick – described by British film critic Peter Bradshaw thus: “Two very large, unattractive men have a fight in a caravan with cataclysmic results, their tiny, shrivelled penises as vulnerable as baby birds.” Potential viewers are asked to grin and bare it.

Fantastic Film Festival, April 16-May 1, fantasticfilmfestival.com.au. Nude screenings of Patrick are at Lido Hawthorn on April 24 and the Ritz Randwick on April 25.

a, cinema, fancy, getting, in, Nude
You may also like: