Monty Don has shared an adorable video of his playful new puppy digging up holes in his garden – sending fans wild.

The 67-year-old BBC host is building up a following for Ned, one of three dogs he currently owns alongside golden retriever Nell and Yorkshire Terrier, Patti.

Since bringing Ned to his UK home, the presenter appears smitten with his latest addition, posting clips of the playful pup in the garden whilst growing garlic, and a sweet picture of the Retriever in a basket.

Ned appeared on BBC Gardener’s World last week alongside his owner, and earlier today he delighted fans by sharing a video of the naughty pup digging up holes in the back garden on Twitter. 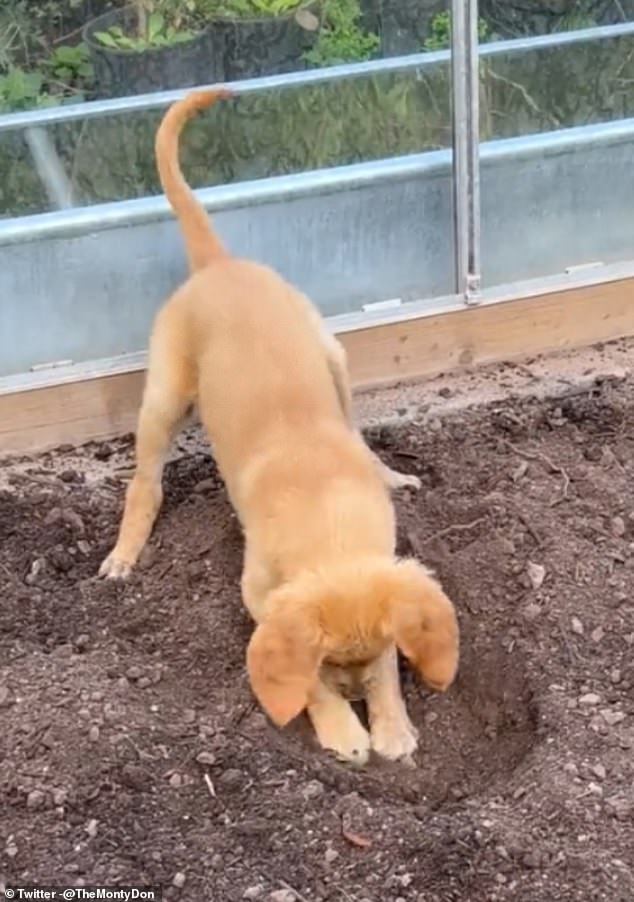 The most recent clip is captioned: ‘More high level horticulture from our resident master gardener’.

Meanwhile the clip shows Ned digging in the mud and zooming around in Monty’s garden – a hit with fans who exclaimed they could ‘watch him all day’.

One said: ‘loved seeing him on GW the other day.’

Another Twitter user said: ‘He can come and help in my garden anytime.’ 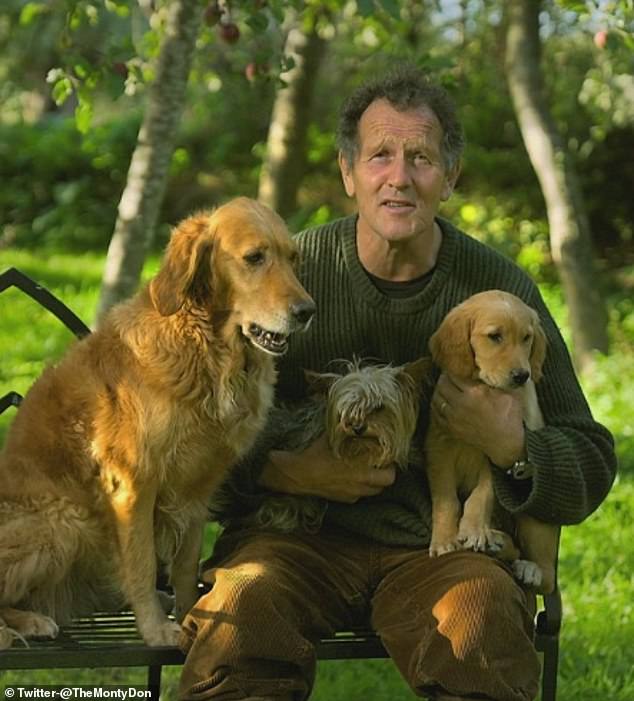 Monty Don is known for his love of dogs, he made front page news after losing his 12-year-old Golden Retriever Nigel, who appeared as his co-star on Gardener’s World. Above he is pictured with Ned (right) Golden Retriever Nell (left) and Yorkshire Terrier Patti(center)

Another commented that the dog would ‘need a bath later’ after frolicking in the mud.

Monty Don is known for his love of dogs, and even appeared on TV alongside one of his pets for years.

Tragedy struck in 2020 when Monty lost his co-host, Golden Retriever Nigel, who had his own following on social media.

The golden retriever became the surprise star of BBC Two’s Gardeners’ World, receiving his own fan mail, social media fan accounts and even lent his name to Don’s book Nigel: My Family And Other Dogs. 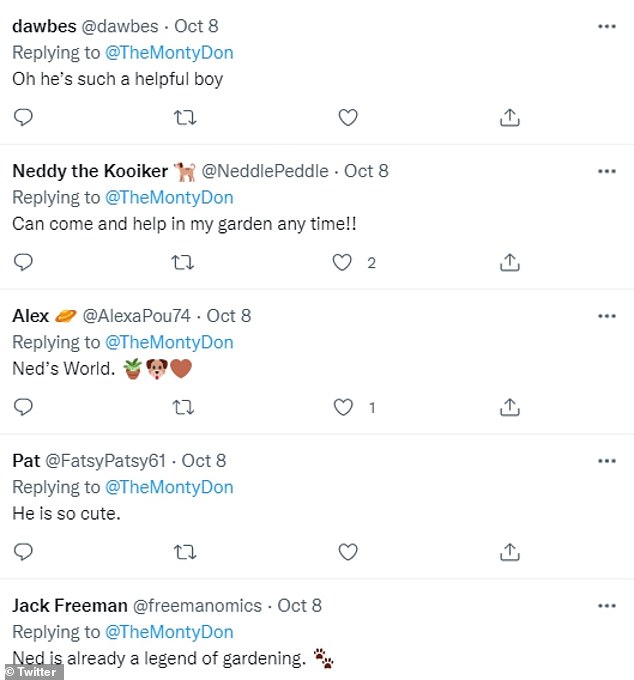 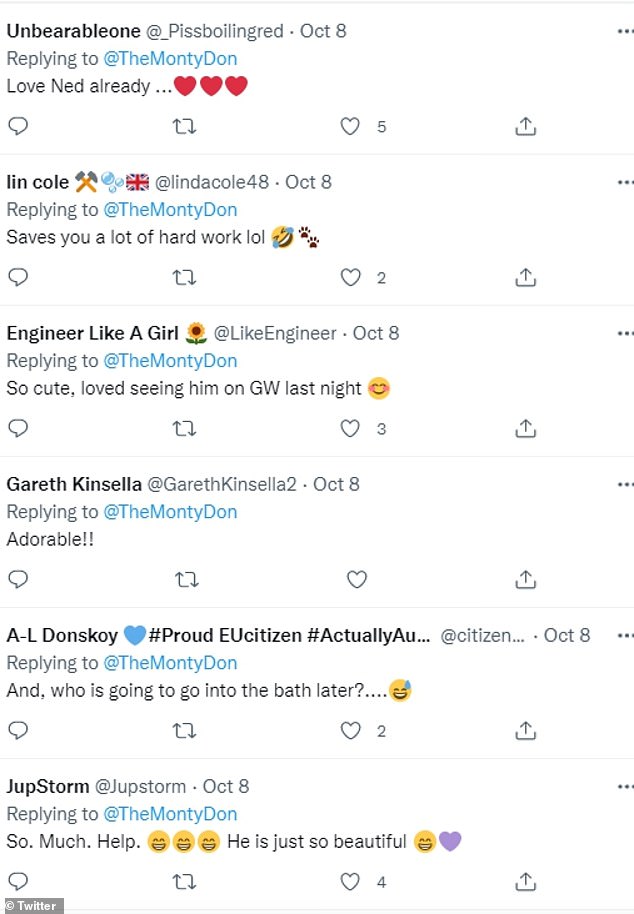 Ned’s World: Ned the Golden Retriever has already built up his own following online with fans saying how ‘beautiful he is’

Before his book was published, Don said: ‘I am just as much a fan of Nigel as any besotted viewer.’

Nigel was frequently seen following Don around the garden with his other Dog Nellie.

Monty, who spoke about his loss on TV and radio, received hundreds of thousands of condolence messages from all over the world.

The broadcaster has previously been open about the emotional ties he had with his canine friend, saying: ‘Once I went to Buckingham Palace and the armed guard asked, “Where’s Nigel?” 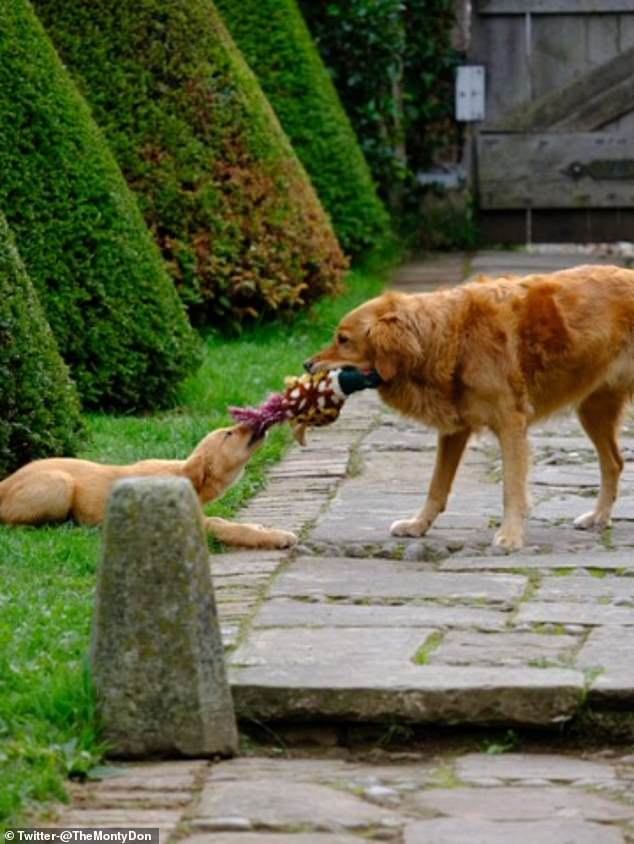 The BBC presenter posted a picture two days ago on Twitter, showing how Ned and Nell play tug of war together for hours

‘I got on a plane at a tiny airport in the Midwest of America and a guy there asked me, “Where’s your dawg?”

‘It seemed extraordinary but wherever I went in the world, everyone knew Nigel.

‘It’s no secret that for many years I’ve suffered from depression… a dog is a huge comfort. Dogs heal, there is plenty of evidence to show that.’

Fresh fears were raised, a few months after Nigel’s death at 12-years-old, when Nell – then a puppy – was impaled on a stick, thankfully surviving as the stick missed her arteries by millimeters.

Monty spoke to fans about the harrowing incident, saying: ‘Don’t throw sticks – the vet said it wasn’t the first injury like this he had seen.’ 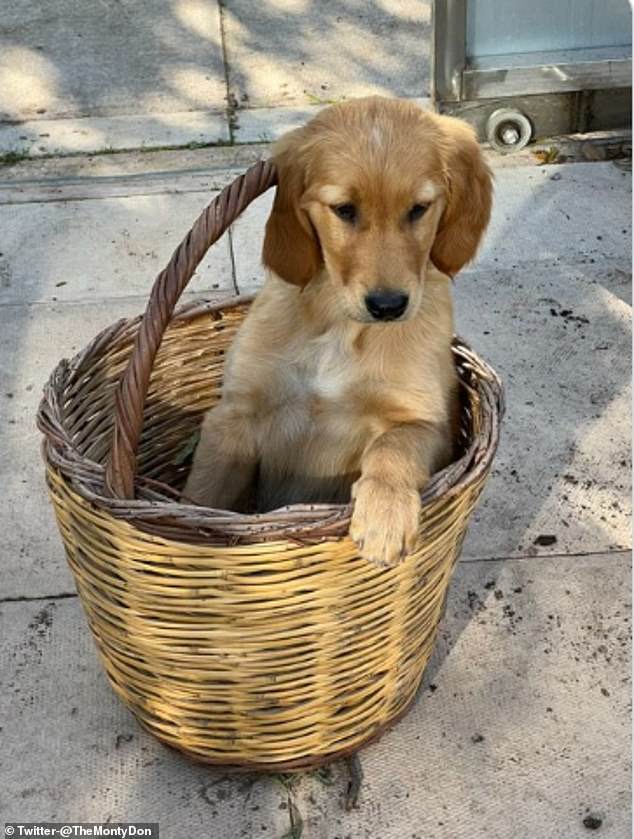 Monty posted this sweet snap yesterday, showing the little puppy sitting in a basket in the garden