Is this the end of the road for Kanye – and his $2 BN fortune? Fallout from rapper’s anti-Semitism scandal will wipe up to $1.2 BILLION from his net worth after Adidas, Gap, and Balenciaga severed ties – while fans boycott his music and trash his clothes

Following years of increasingly controversial scandals, Kanye West finally appears to be facing the consequences of his actions to a level like never before as Adidas officially cut ties on their $1.5 billion partnership with the rapper – ending a lengthy list of big name brands to have severed all links to the scandal-ridden rapper.

After shocking the world with a series of outbursts on social media in which he made anti-Semitic comments as well as derisive remarks against other celebrities, the 45-year-old musician – who first revealed his bipolar disorder diagnosis in 2018 – has also seen his lucrative business partnerships with the likes of Gap and Balenciaga ended over the past week.

The rapper – who was hospitalized for a psychiatric emergency in 2016 – has been no stranger to scandal throughout his career, which has been marred by infamous public feuds with the likes of singer Taylor Swift, rapper Drake and even his estranged wife Kim Kardashian and her family, whom he repeatedly attacked on social media.

Meanwhile, the musician has been consistently losing the support of fans over the years for his troubling comments – including claiming that ‘slavery is a choice’ and insisting that George Floyd died of a fentanyl overdose and was not murdered by Minneapolis cop Derek Chauvin.

West’s most recent race-related controversies kicked off October 3 when he and and conservative commentator Candace Owens donned tops that read White Lives Matter during a Paris Fashion Week showcase for his Yeezy line.

West then faced restrictions on his social media sites after he tweeted on October 8: ‘I’m a bit sleepy tonight but when I wake up I’m going death con 3 On JEWISH PEOPLE … The funny thing is I actually can’t be Anti Semitic because black people are actually Jew also … you guys have toyed with me and tried to black ball anyone whoever opposes your agenda.’ 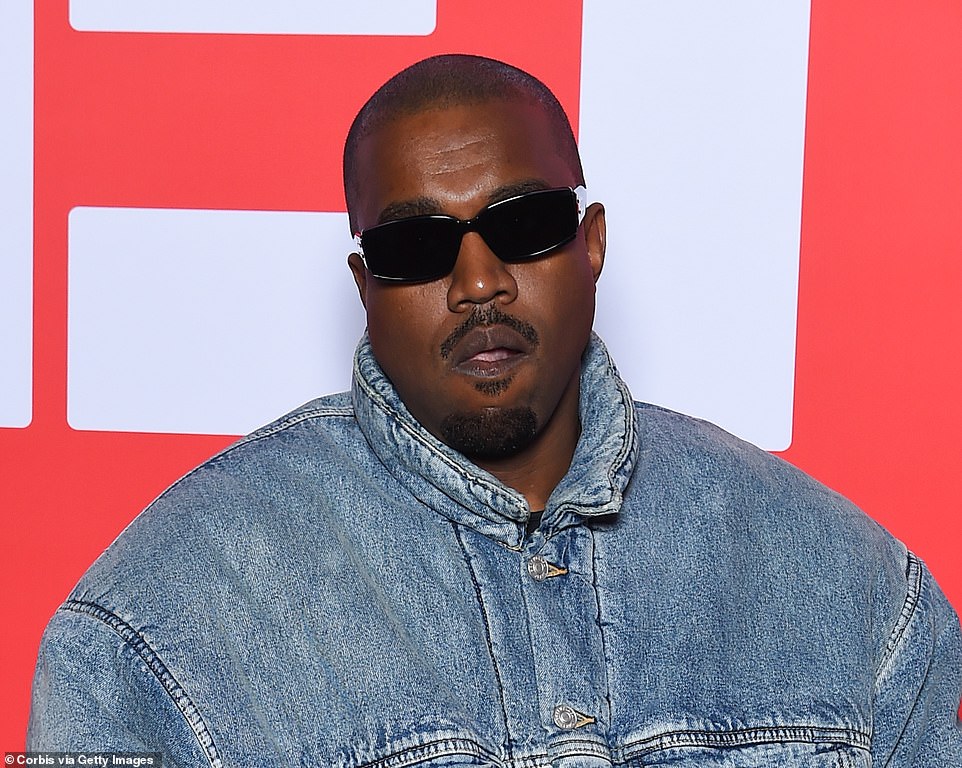 Ye has split from multiple corporate partnerships in recent weeks including Adidas, Balenciaga and GAP, which is set to have a knock on effect on his $ 2 billion fortune 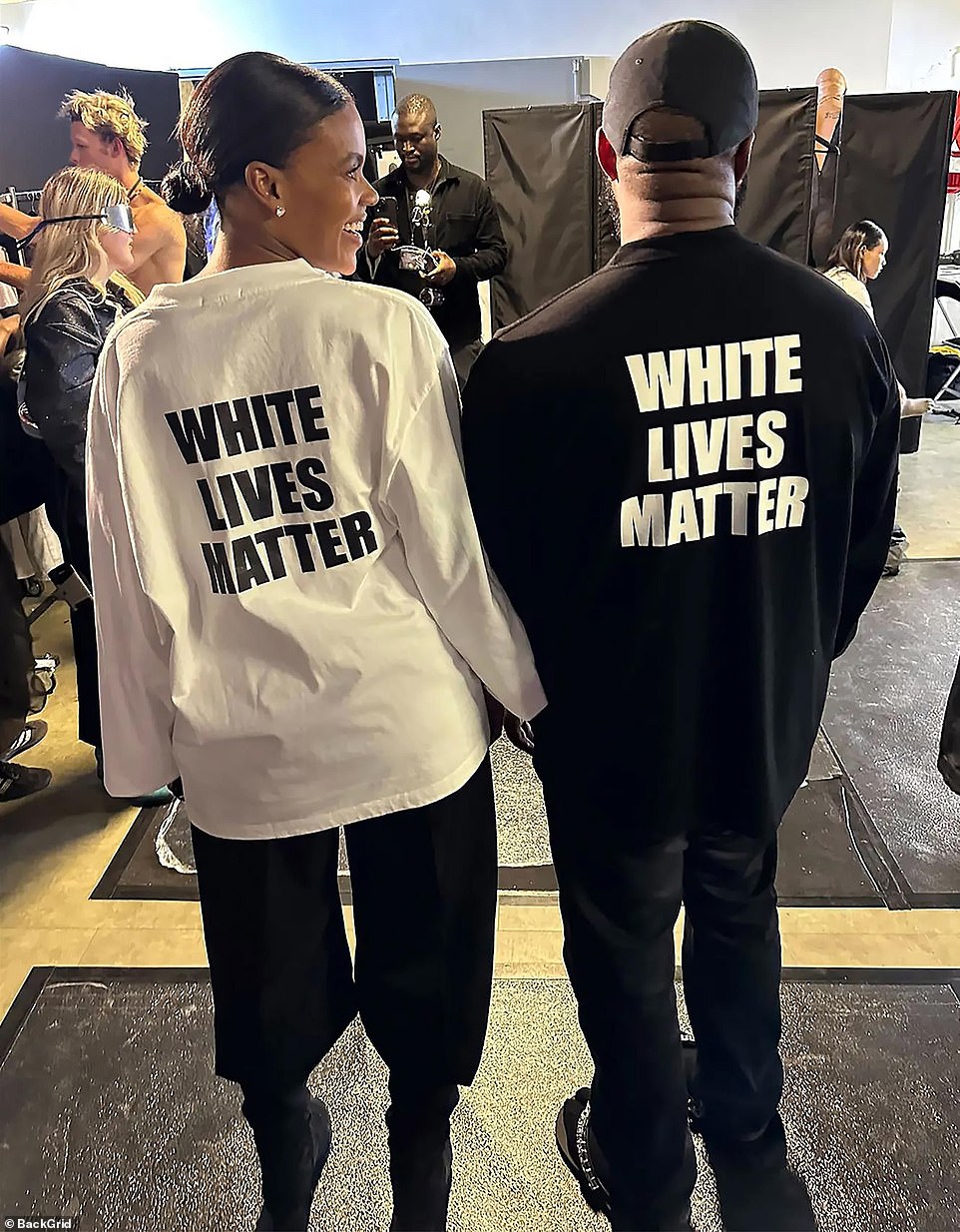 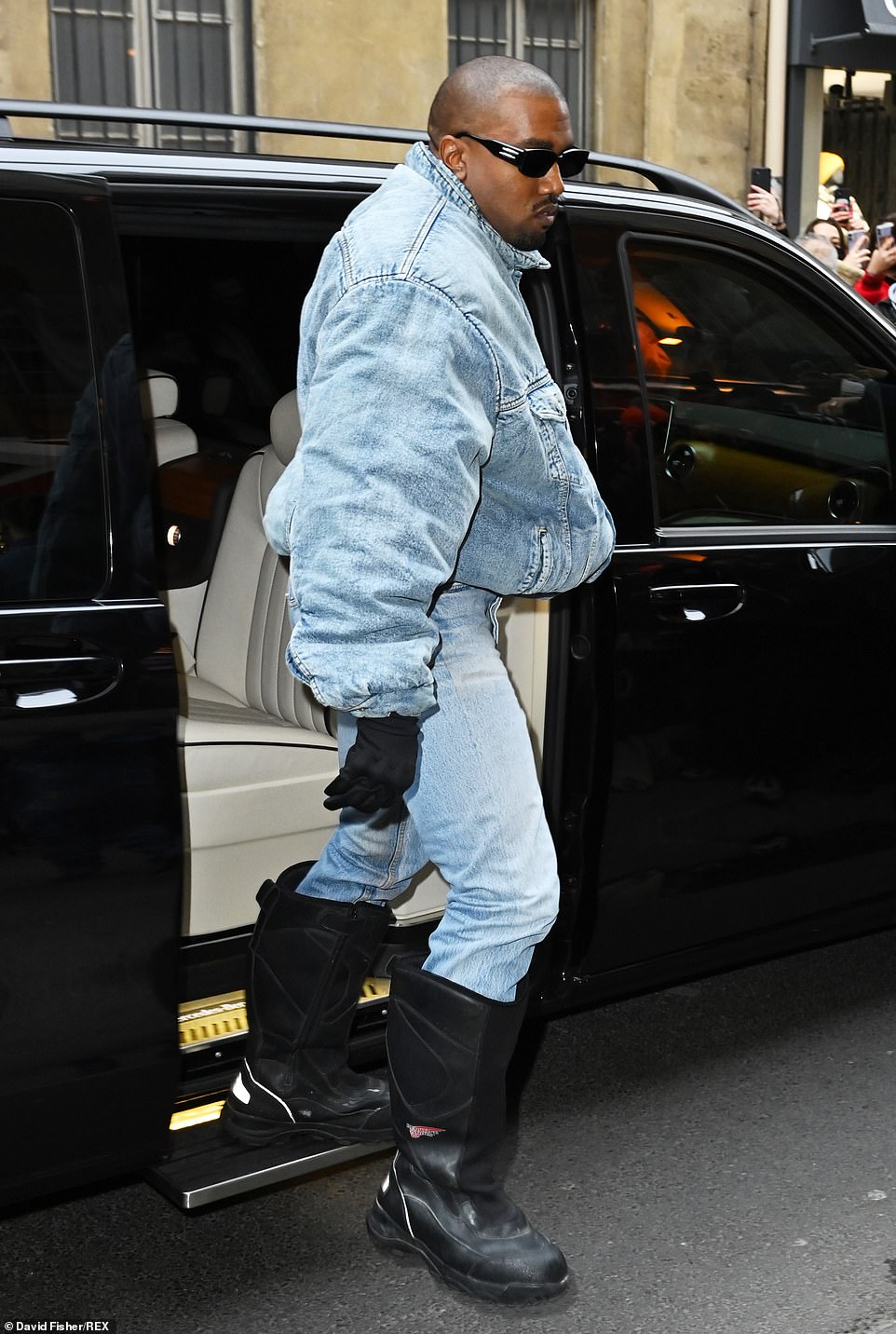 The rapper was asked by Piers Morgan Wednesday if he regretted the tweet and he said, ‘No – absolutely not, absolutely not … I fought fire with fire – I’m not here to get hosed down – that’s a different type of freedom fighter.’

West’s name made further headlines over the weekend after a group took to the 405 Freeway in Los Angeles saluting Adolf Hitler with banners that read, ‘Kanye is right about the Jews’ and ‘Honk if you know.’

Now the musician is facing backlash like never-before after being dropped by top talent agency CAA and Johnny Depp’s lawyer Camille Vasquez.

Elsewhere, fashion bible Vogue has decided not to work with him in the future as more and more influential figures and businesses chose to distance themselves from the fashion designer.

As fans now begin to boycott his music and throw away items from his business that they own, FEMAIL lays bare how the star’s anti-Semitism scandal might be the one controversy he is unable to bounce back from.

Adidas cuts ties on their $1.5 billion deal: West’s deal with Adidas was the crowning jewel of his fortune, earning him $191 million in royalties in 2020 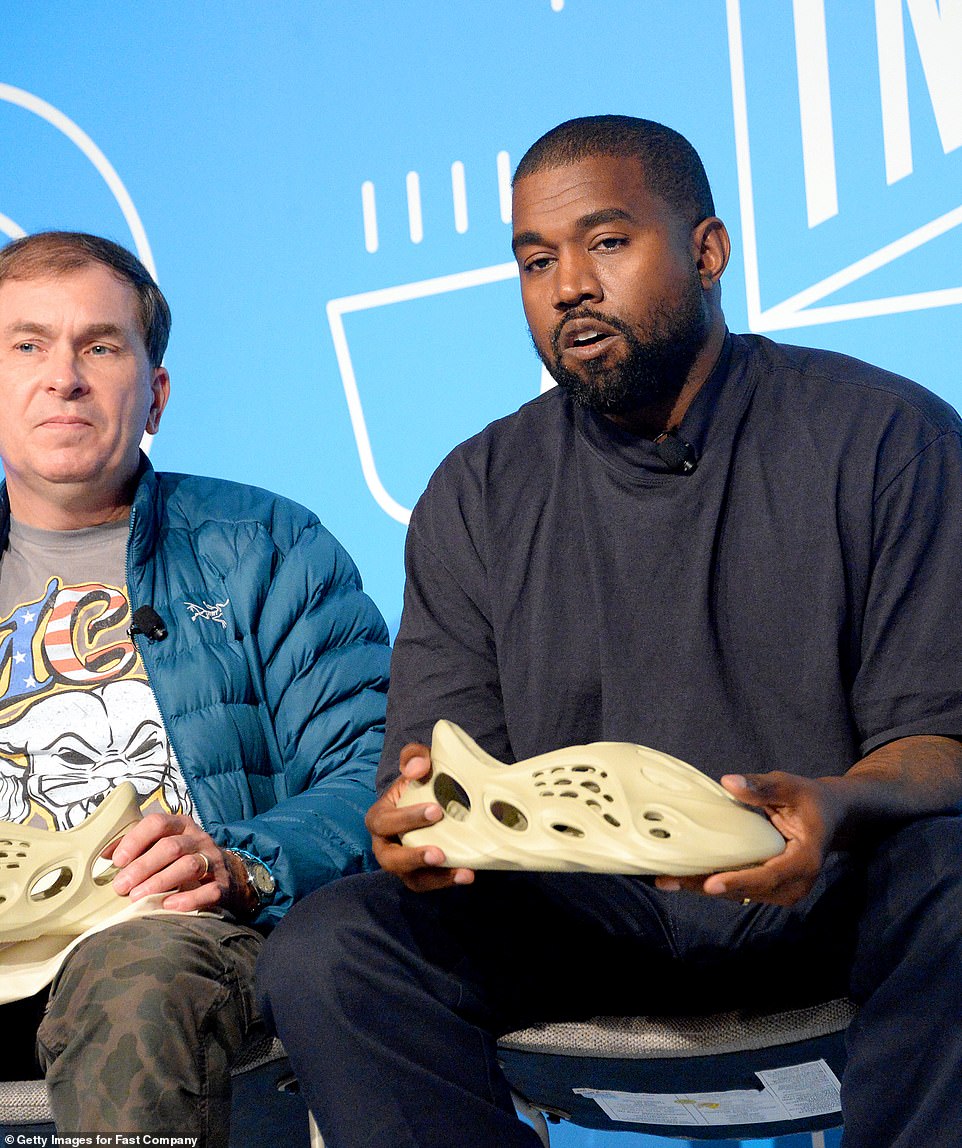 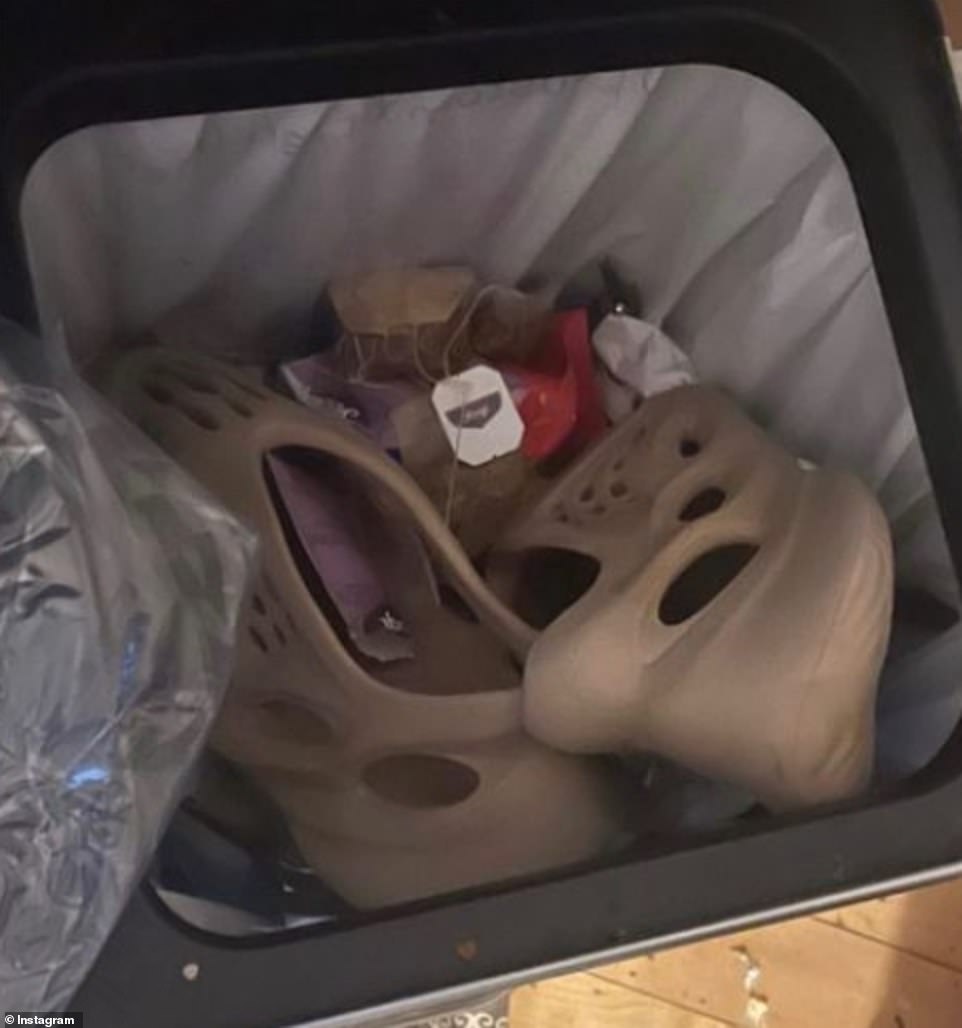 Adidas has made the move to terminate its partnership with Kanye West amid backlash over the rapper and designer’s controversial behavior.

The German sporting goods behemoth announced the move today in a statement released online, with the sportswear maker having put its partnership with Ye under review earlier this month ‘after repeated efforts to privately resolve the situation.’

‘Adidas does not tolerate antisemitism and any other sort of hate speech. Ye’s recent comments and actions have been unacceptable, hateful and dangerous, and they violate the company’s values of diversity and inclusion, mutual respect and fairness,’ the company’s statement read.

‘After a thorough review, the company has taken the decision to terminate the partnership with Ye immediately, end production of Yeezy branded products and stop all payments to Ye and his companies. adidas will stop the adidas Yeezy business with immediate effect.’

The company also claimed that cutting ties with the rapper is likely to have a ‘negative impact of up to €250 million on the company’s net income in 2022’.

Ending his $970 million Gap X Balenciaga deal: Rapper went on a public rant against the brands and demanded to end their contract, before both publicly cut ties 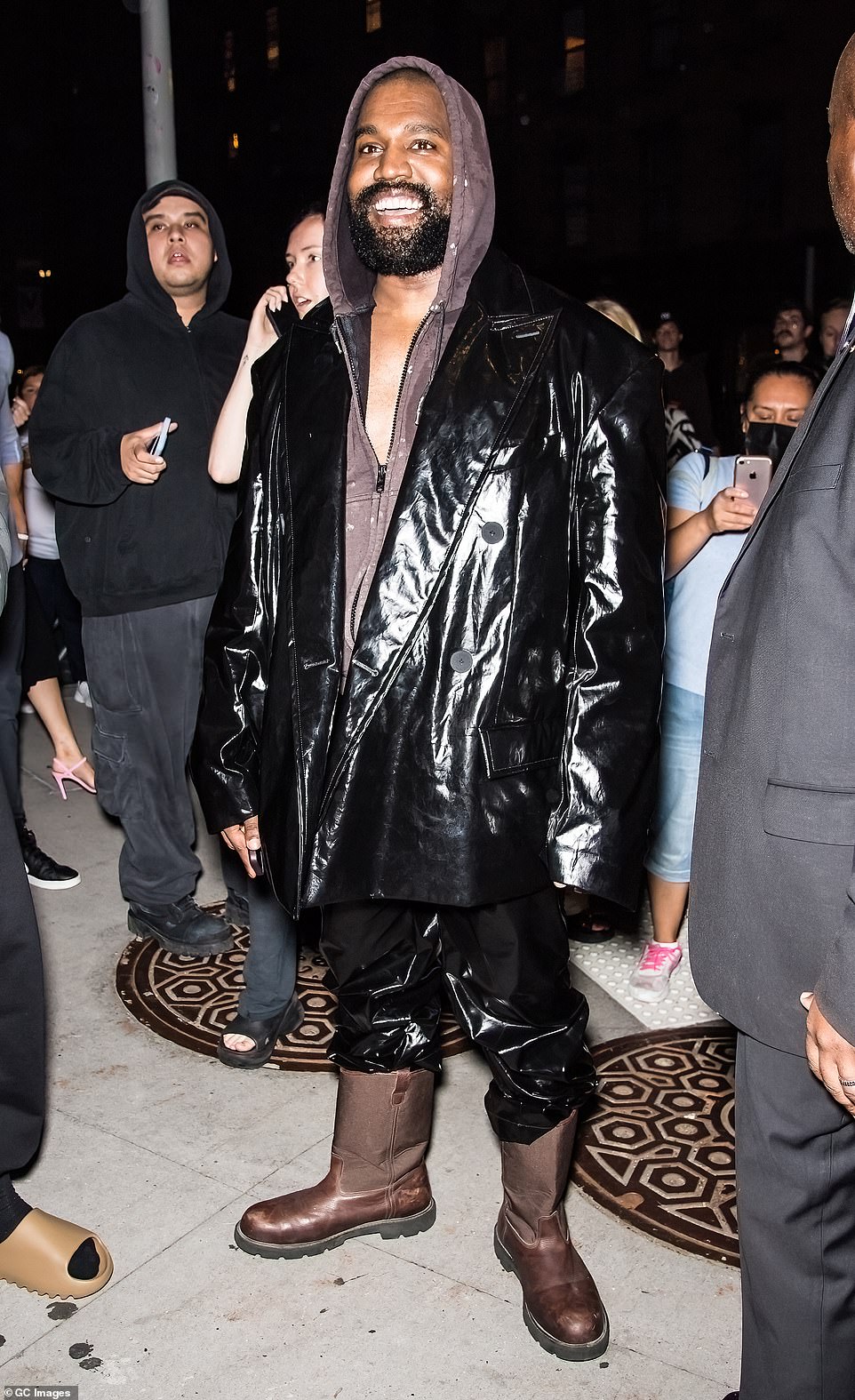 The confirmation of West’s Gap collection deal in June 2020 was a monumental moment for the rapper, who used to work in at one of its stores in Chicago as a teenager.

The collaboration was estimated at around $970million when the deal was announced, and it was expected to last for ten years.

Initial products sold out in 2021 and West later claimed that they sold $14 million worth of hoodies at $80 per item.

However, the rapper terminated his work with the retailer in September 2022 after they refused to place him on the Gap corporate board.

The artist’s lawyers sent a letter to the company to notify them of the termination, according to The Wall Street Journal.

The letter alleged that Gap breached their agreement by not releasing apparel as planned, or opening stores.

Gap were also part of a deal between Yeezy and Balenciaga, with estimates claiming they would bring in $1 billion in projected sales.

A rep for Balenciaga’s parent company Kering told Women’s Wear Daily Friday, the company ‘has no longer any relationship nor any plans for future projects related to this artist.’

How his $90 million music empire could go up in flames: West’s streams and sales set to take a hit as fans choose to boycott his music 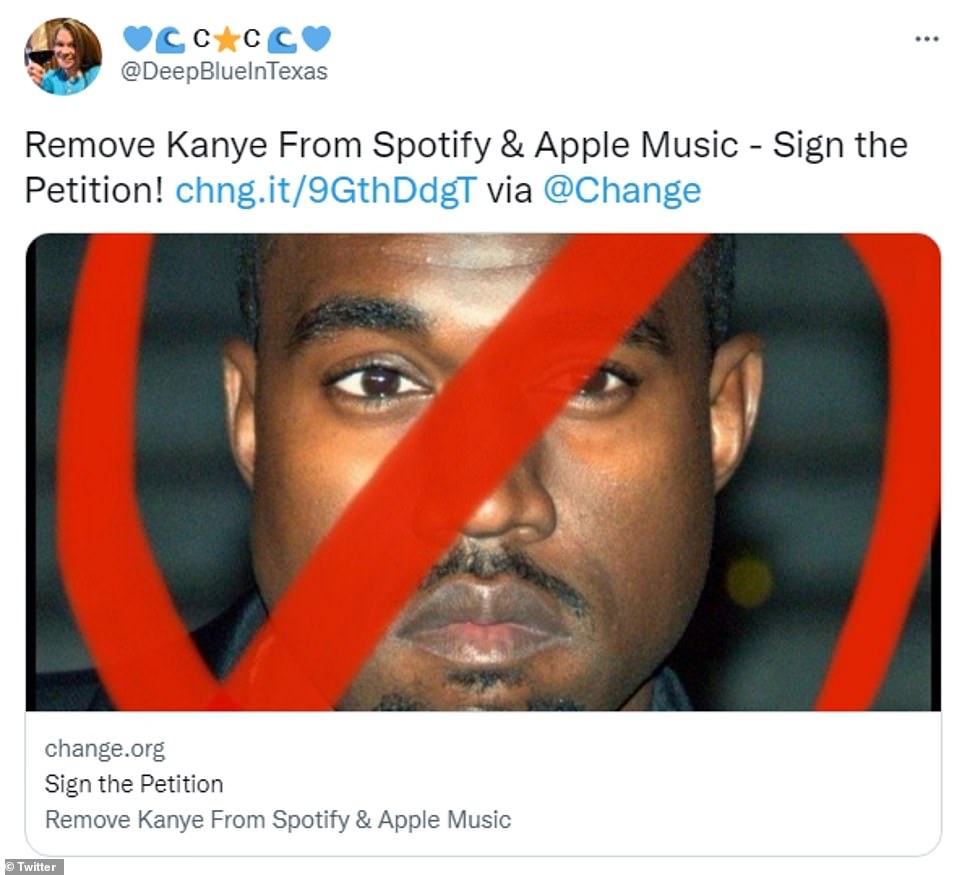 The award-winning artist has over 50million monthly listeners on Spotify, however the number is expected to drop as more and more music fans announce their plans to boycott his music and call for him to be removed from the platform 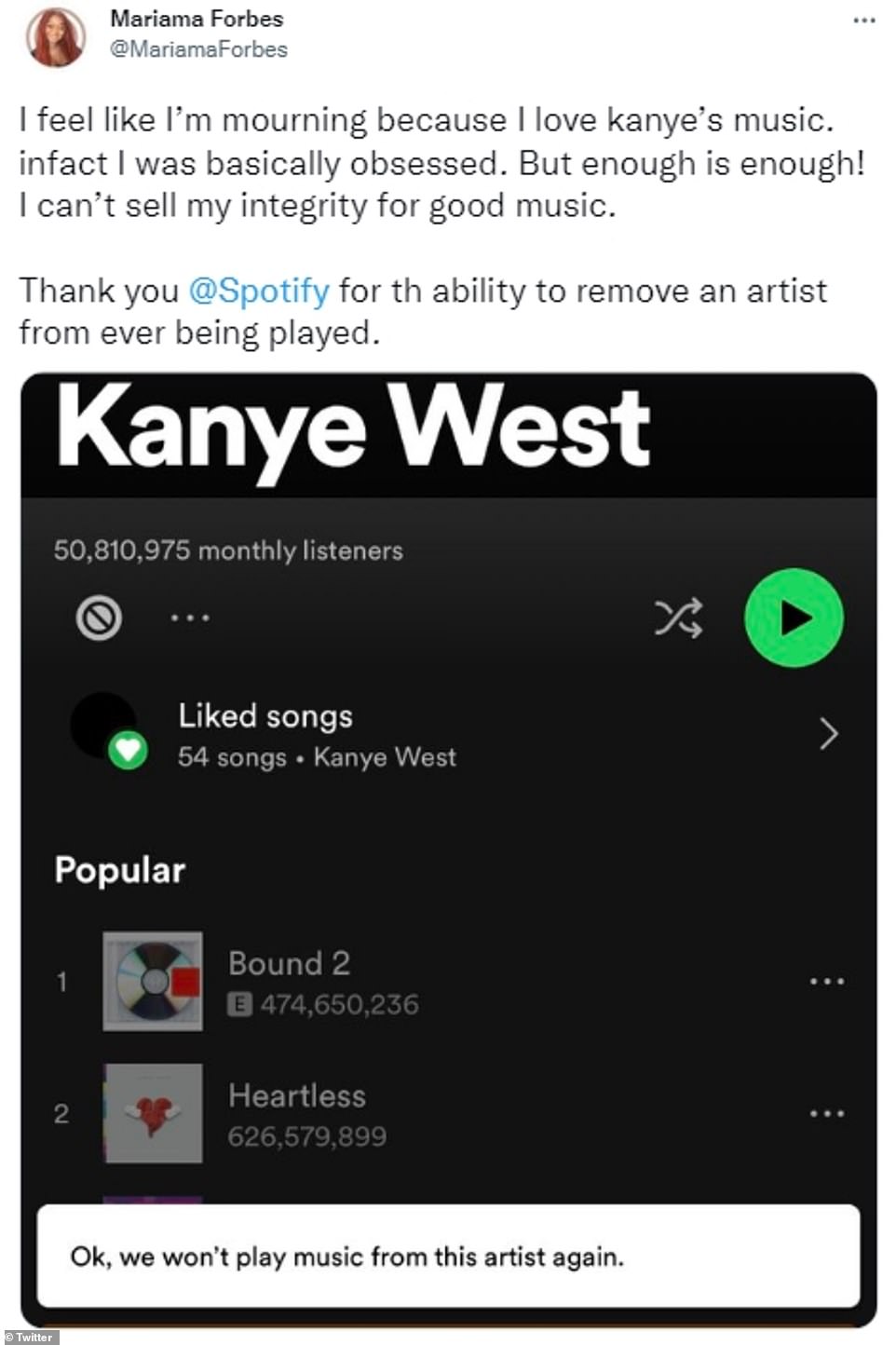 Taking to social media sites such as Twitter, TikTok and Instagram, many has been sharing images of themselves muting the star’s music on streaming services in response to his recent behavior

West has sold over 140 million albums worldwide, and documents seen by Forbes show that his own recorded music and publishing rights is worth at least $90million.

At present, the award-winning artist has over 50million monthly listeners on Spotify however the number is expected to drop as more and more music fans announce their plans to boycott his music.

Taking to social media sites such as Twitter, TikTok and Instagram, many has been sharing images of themselves muting the star’s music on streaming services in response to his recent behavior.

One furious fan tweeted: ‘Let me remove every Kanye song off my Spotify. F**k him’.

‘Welp time to remove Kanye’s music from my Spotify playlists,’ another commented.

One fan stated: ‘I feel like I’m mourning because I love kanye’s music. infact I was basically obsessed. But enough is enough! I can’t sell my integrity for good music.

‘Thank you @Spotify for the ability to remove an artist from ever being played.’

What is left of the rapper’s fortune? Questions still remain about Kanye’s personal brands and businesses, from Yeezy to his Donda Academy 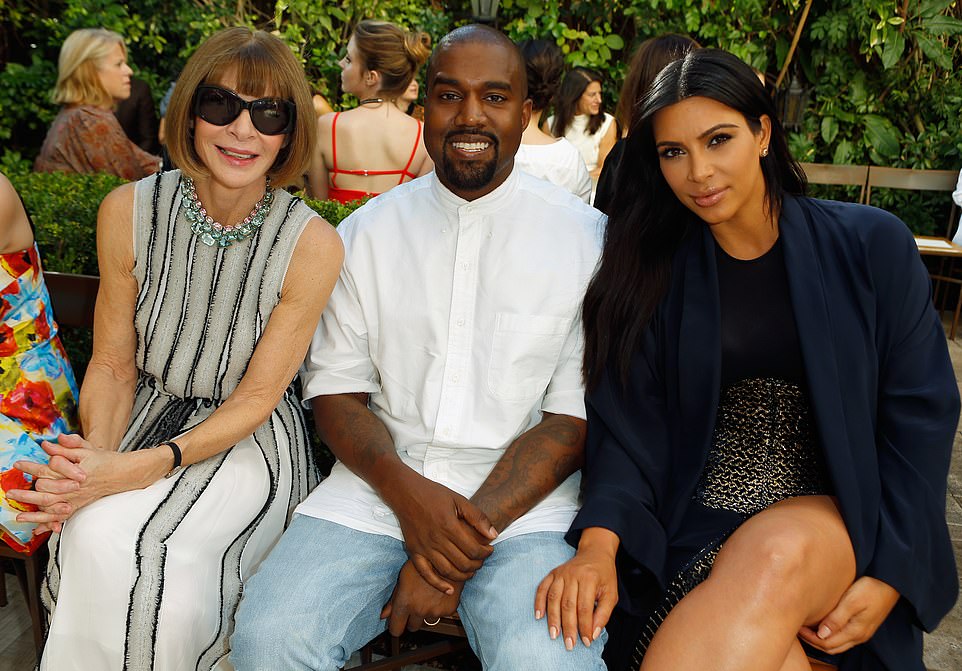 Fashion mainstay Vogue magazine have publicly distanced themselves from the rapper/fashion designer, after he has enjoyed years of friendship with Editor in Chief Anna Wintour (pictured in 2015 alongside his ex-wife Kim Kardashian) 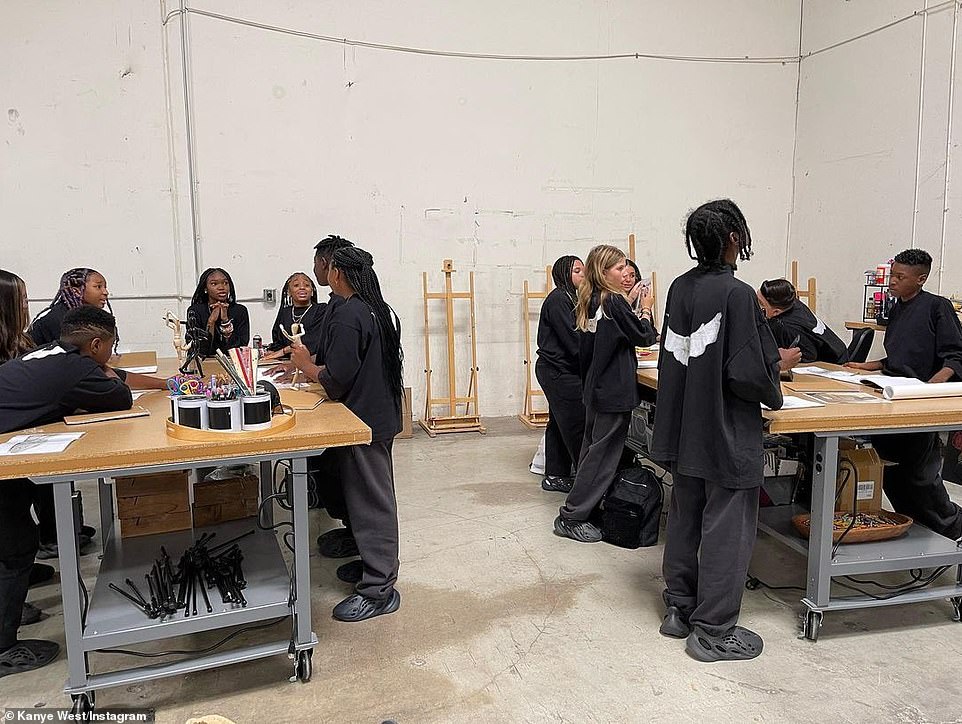 West has recently revealed plans on opening his own Donda school campuses, named after his late mother, where it will house schools, farms, dorms and house shopping, with products sold there from the Yeezy brand

The continued fallout is set to have a further effect on West’s fortune and remaining business ventures. On Monday, West was dropped by the talent agency CAA, which he initially signed with six years ago. The move means that it will be even harder for the rapper to try and procure new deals amid the ongoing backlash now he now longer has the CAA team attempting to negotiate collaborations on his behalf.

It also comes after Johnny Depp’s lawyer Camille Vasquez chose to no longer work with the star, while fashion mainstay Vogue magazine have publicly distanced themselves from the rapper/fashion designer.

A spokesperson for Vogue told Page Six Friday that the magazine and its editor-in-chief Anna Wintour have no plans on working with West in the future.

An insider said Wintour ‘has had enough’ of West’s behavior, and ‘has made it very clear inside Vogue that Kanye is no longer part of the inner circle.’

Meanwhile, a documentary about West made by the studio MRC will be shelved in the wake of the scandal, the AP reported, as execs Modi Wiczyk, Asif Satchu and Scott Tenley said in a Monday memo, ‘We cannot support any content that amplifies his platform.’

They added: ‘Kanye is a producer and sampler of music. Last week he sampled and remixed a classic tune that has charted for over 3000 years – the lie that Jews are evil and conspire to control the world for their own gain.

‘This song was performed acapella in the time of the Pharaohs, Babylon and Rome, went acoustic with The Spanish Inquisition and Russia’s Pale of Settlement, and Hitler took the song electric. Kanye has now helped mainstream it in the modern era.’

It is unknown what West’s next endeavor is, and unclear what brands will work with the rapper, although he did vocalize plans on going solo and opening his own stores, without a company ‘standing in between me and the audience.’

‘It’s time for me to go it alone. It’s fine. I made the companies money. The companies made me money. We created ideas that will change apparel forever. Like the round jacket, the foam runner, the slides that have changed the shoe industry. Now it’s time for Ye to make the new industry. No more companies standing in between me and the audience,’ he told Bloomberg.

As of October 7, West also claimed he had a five per cent stake in Kim Kardashian’s SKIMS range – which would be worth $160 million after the company was most recently valued at $3.2 billion.