In the years leading up to the recent huge bushfires, park rangers in East Gippsland hadn’t been able to locate a small, ground-dwelling frog known as a martins toadlet, which is critically-endangered.

After a long drought there were no pools on the grounds, no frogs calling and no sign of the martins toadlet, leaving a significant question mark over its future. 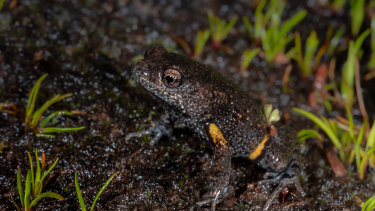 A martin’s toadlet is a critically-endangered species of frog that lives in eastern Victoria. Credit:Jeremy Tscharke

But recently, Parks Victoria ranger Jeremy Tscharke went out surveying in wild, wet weather, and heard the toadlet’s characteristic long, creaking ‘aaaaaar’ call: “The frogs were going off that night”.

It had likely bunkered down in the humus layer while the fires passed over, and when the La Nina weather pattern brought damp weather they re-emerged and looked for habitat.

But the toadlet is not the only creature in East Gippsland searching for safe harbour after the fires.

Parks Victoria has also noticed feral animals – like pigs and deer – are moving across the burnt landscape looking for places to live and feed, and coming into “refuge” areas that didn’t burn. 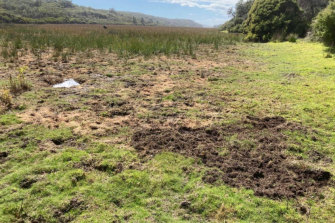 Feral pig damage to habitat at Ewing Morass Wildlife Reserve. Feral animals have been moving into the “refuge” areas of unburnt habitat after the bushfires. Credit:Jeremy Tscharke

This brings them into competition with native species, which often need particular environments and can’t cover the range that feral animals do.

The unassuming Ewing Morass wetland, east of Bairnsdale, is a haven for rare and endangered frogs, and its residents include the martins toadlet, green and golden bell frog, the leaf green tree frog, and the blue mountain tree frog. It has become an important refuge for species displaced by the 2019-20 fires.

But in recent weeks, feral pigs moved into the reserve and were damaging the water and surrounds by chewing up roots that keep vegetation and wetlands intact, and causing turbid water.

Feral pigs also eat small mammals, reptiles and frogs, and breed at a ferocious rate. They are able to produce young from three months of age, and may have 12 piglets in a litter.

Luckily, because rangers were regularly visiting the area, and spotted the pig spoor, they were able to act quickly, says Mr Tscharke, who is the ranger for the lakes and eastern alps. “Timely, regular visits are critical so you don’t assume everything is okay,” he said.

The Ewing Morass Wildlife Reserve is now being included in the pig baiting and trapping works as part of the Victorian government’s $50 million bushfire biodiversity response program.

During the past six months Mr Tscharke has been investigating the effect on amphibians of East Gippsland, particularly the ones that are only found in the fire footprint.

As expected, he found much lower numbers of individuals present at each site than before the fires, but says there are enough to repopulate the areas. 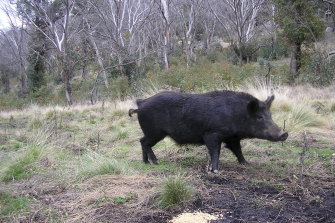 “Where I might have heard a chorus of frogs before, I’m only hearing dozens, or individual frogs,” he says. “But there were no sites where I didn’t hear what I was expecting.”

“Most of the species, if not all of them, have survived quite well. It’s a positive result.” 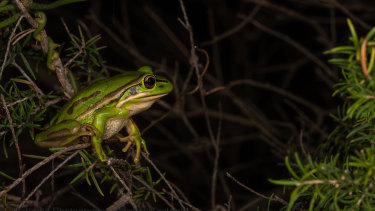 The Ewing Morass wetlands now also have a very healthy population of the endangered growling grass frog, which had not been seen in this location before.

Frogs are surveyed by listening for their call, searching with a torch and even playing calls electronically to see if any animals respond and call back.

Feral, move, on, species, unburnt
You may also like:

Can The Star help Packer’s Crown Resorts out of its regulatory woes?