Fewer than a third of Aboriginal and Torres Strait Islander Australians are fully vaccinated against COVID-19, well under the 52 per cent double-dose coverage of all over 16s across the nation. 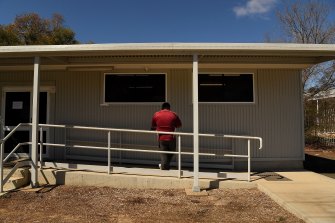 A man waits to enter the Ochre Medical Centre in Brewarrina in Western NSW.Credit:Kate Geraghty

More than 76 per cent of the eligible population aged 16 and over had had at least one dose, including 94 per cent of people over 70.

At the beginning of the national rollout, Indigenous people were classified as a priority group for access to vaccines because they are considered more vulnerable to COVID-19 due to a higher burden of illness and poorer socio-economic outcomes compared to the general population.

But nationally, just 165,866 Indigenous people have been fully vaccinated against COVID-19, with NSW accounting for 65,000 of them.

States such as Queensland and Western Australia continue to trail the rest of the country. Just over 11,000 Indigenous people in WA have been fully vaccinated, or slightly more than 10 per cent of the eligible population.

Among other vulnerable groups, vaccination rates are much higher.

fewer, in, Indige, one, than, three
You may also like: