Veteran Labor MP Joel Fitzgibbon will use an event to mark the 25th anniversary of John Howard’s first election win as leader to urge his party to learn from Australia’s second-longest-serving prime minister and broaden its electoral appeal.

The outspoken backbencher, who quit the frontbench last year following 18 months of disagreement over the opposition’s policy direction on energy, tax and climate change, will warn his colleagues against repeating past mistakes of underestimating their opponent. 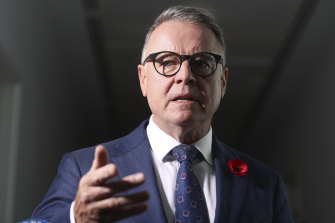 Labor MP Joel Fitzgibbon will say the lesson to learn from the Howard government is that to be a successful party of government in a two-party system, you must build a broad coalition of community support.Credit:Alex Ellinghausen

He will say Labor keeps losing elections because it has developed a form of “institutional elitism”, fuelled by an unhealthy belief in its “intellectual and moral superiority”.

“[Prime Minister] Scott Morrison is the latest to benefit from Labor’s failure to take its main opponent sufficiently seriously,” Mr Fitzgibbon says in a draft version of the speech.

“Labor massively under-estimated him when he took the Liberal Party leadership in 2018. I vividly recall too, hearing senior Labor people dismissively speaking of John Howard in 1996. Many cabinet ministers since have been similarly under-estimated.”

He will say by contrast, Mr Howard was never guilty of under-estimating Labor leaders such as Mark Latham, even if he was often wrong-footed for many months.

Mr Fitzgibbon, who entered Federal Parliament at the 1996 election by succeeding his father Eric in the NSW seat of Hunter, will join Mr Howard, former prime minister Tony Abbott and former deputy prime minister John Anderson at a University of NSW function marking the milestone on Tuesday.

He will say while Mr Howard’s “stubbornness” over an apology to the Stolen Generation still taints his political legacy, the former PM’s efforts to wedge Labor on refugee and national security policies still weigh on the opposition to this day.

Mr Fitzgibbon will say the lesson to learn from the Howard government is that to be a successful party of government in a two-party system, you must build a broad coalition of community support.

“Critical to achieving that broad support base is accommodating the diverse range of thoughts and attitudes held by the representatives of many very diverse electorates,” he will say.

“By contrast, Labor’s lack of sufficient regional representation in the parliamentary party is a barrier to policy and electoral success.”

Mr Fitzgibbon suffered a 14 per cent swing in his own seat in May last year, with his One Nation opponent’s 21 per cent of the vote pushing the result to preferences against the Nationals.

He has outraged his colleagues with his continued advocacy of fossil fuel industries and his calls for the party to support the Morrison government’s 2030 climate targets in a “political settlement” designed to end its electoral pain on the issue.

He will tell the event the issue driving traditional Labor voters from its arms remains its environment policies and its “overreach on climate”.

Mr Fitzgibbon will say since Labor’s “forestry policy debacle” in 2004 caused blue-collar unionists to “cheer” Mr Howard, the party has struggled to successfully balance the aspirations of its traditional support base and its more recently arrived progressive base.

“It is task made much harder by the 2010 deal [former prime minister] Julia Gillard did with the Greens to form a minority government,” he will say.

“Labor’s 2019 equivocation over the Adani coal mine further compounded the problem. Too many punters remember both the 2010 signing ceremony and the Bob Brown Stop Adani convoy too well.”

Fitzgibbon, free, Labor, offer, to
You may also like: