Restrictions on pandemic-fatigued Australians may start to be eased as early as mid-November under a national cabinet road map but it hinges on young men getting their jabs and laggard states struggling to get their residents vaccinated.

A surge in the number of people getting their first dose – 111,000 people received a vaccination on July 31 – plus high rates of people returning for their second dose of Pfizer or AstraZeneca is lifting confidence about reaching the first key target of the national cabinet plan. 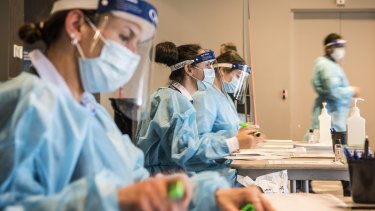 States, territories and the federal government have set a four-phase plan towards fully reopening the country. The second stage, which would see eased restrictions on vaccinated people, requires 70 per cent of people over the age of 16 to be fully vaccinated.

At the 80 per cent vaccination rate, caps on the number of returning vaccinated Australians would be abolished, caps on international visa holders and refugees would be increased while international travel bubbles would be extended.

To reach 70 per cent, the number of double-dosed Australians over the age of 16 will have to reach more than 14.4 million. As at July 30, there were more than 3.9 million people fully vaccinated.

The number of doubled-dosed people has been climbing at an average of almost 100,000 a day through the second half of July. At that pace, the 14.4 million target would be reached in the week starting November 22.

Deakin University epidemiologist Catherine Bennett believes Australia’s target of vaccinating 80 per cent of people over the age of 16 is achievable by the end of the year “at our current rate”. Professor Bennett also noted that vaccine take-up was accelerating and her estimate could be beaten. “That, I think, is very encouraging to people.”

Prime Minister Scott Morrison said he believed it was entirely possible the 70 per cent target could be reached by Christmas.

“If I were to walk out here in Canberra this morning wearing nothing but my board shorts, I would freeze. But if I go out there with a big coat on, I’ll be fine. That’s what getting to 70 per cent vaccination is.”

But the November timeline could be thrown out by tardiness among certain age groups and states.

There are more than 7.2 million Australians aged between 20 and 40. Among this group, which has faced restrictions on accessing a vaccine, just 10 per cent have received two doses.

Across the entire population, the number fully vaccinated is 19 per cent with the highest rates – more than 40 per cent – among people aged 70 and over. 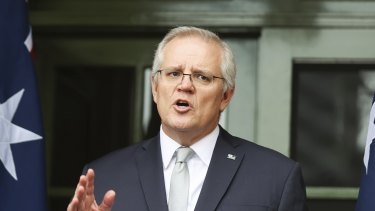 Prime Minister Scott Morrison says the 70 per cent vaccination target can be reached before Christmas.Credit:Alex Ellinghausen

Among under-40s, there is a widening gap between men and women. Despite initial concerns about their hesitancy, women have substantially higher rates of first dose and full vaccination rates than men.

Among the estimated 1.9 million people aged between 30 and 34, the single largest age group tracked by the federal government, 18.2 per cent have had a first dose while 10.7 per cent or 205,000 people are fully vaccinated. Women in this group are almost 50 per cent more likely to be fully vaccinated.

As part of the plan, the 70 per cent target has to be met in a state or territory to start easing its restrictions.

Professor Bennett said the Doherty Institute modelling that Canberra relied upon to set the 70 and 80 per cent targets was actually quite conservative. “We’re saying we have to get to 70 per cent before we can really do much at all, so I think that is conservative.”

She said that was a reality of the highly transmissible Delta variant ravaging Sydney where vaccinations were already working. Professor Bennett believes about 1000 cases may have already been prevented in Sydney, with hospitalisations and deaths dramatically reduced.

Dr Stephen Duckett, health program director at the Grattan Institute, believes the phased targets are too low to safely abandon lockdowns because they do not include under 16s – meaning the targets are closer to 55 and 62 per cent of the total population.

He said the phased plan was almost too vague to comment on – listing measures that “may” be used – and failed to rule out lockdowns, which were up to each state anyway. “It doesn’t give you any specificity whatsoever but it serves the political purpose of having a plan,” he said.

The Grattan Institute wants a ramped-up advertising campaign, financial incentives such as a weekly $10 million lottery, mandated vaccines in some industries, a text message campaign, and vaccinations in schools and workplaces once extra Pfizer doses arrive in October.

The institute has done its own modelling, released last week, that found 80 per cent of the whole population should be fully vaccinated before it is safe to give up on lockdowns and open borders.
Dr Duckett said that would be achievable by the end of the year if Pfizer was approved for children under 12, or by the end of March next year if not. “The reason we did the whole population is that everyone can transmit the virus.”

But in Western Australia, the full vaccination rate is a national low of 16.1 per cent.

The national average could be held back by a laggard state like WA or Queensland which has the lowest single dose rate in the country at 36.8 per cent.

NSW Health Minister Brad Hazzard said the thresholds had to apply “right across the country”.

“I did hear one premier basically saying, ‘Well, we’ll run our own race.’ It can’t be that way,” he told the ABC.

“Every state and every territory must get to those targets in order for that to be an effective outcome from the national cabinet, and to keep us all safe.”

The Therapeutic Goods Administration has approved the Pfizer vaccine for 12- to 15-year-olds. Advice from immunisation expert group ATAGI on which children should get it, and when, is expected this week. Some in the government expect the advisory group to follow the UK’s stance, which is that at this stage only children with serious underlying health conditions need to be vaccinated.

If ATAGI does recommend shots be given to children as young as 12, the size of the eligible population will increase.

Federal Parliament resumes this week but the latest, short lockdown in Queensland will affect the sitting. MPs and senators who have been in one of 11 Queensland local government areas – including Labor leader Anthony Albanese and shadow Treasurer Jim Chalmers – are required to isolate in their Canberra accommodation, take a COVID-19 test and only move between their homes and Parliament while wearing a face mask.

freedom, from, in, lockdowns, Nove
You may also like: