The future of two Central Coast commuter car parks funded through a controversial grants program appears up in the air, with no start dates and no money pledged by the NSW government.

Prime Minister Scott Morrison announced the funding for the car parks in March 2019, a fortnight before he called the election, with $30 million to build 600 spaces near Gosford train station and $5 million for 140 spots at Woy Woy. 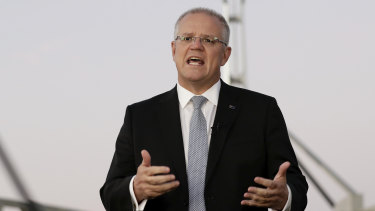 The federal government announced $30 million for a commuter car park at Gosford station in 2019 but the council has said it can’t afford to build it.Credit:Alex Ellinhgausen

The intention at the time was the state government or local council would match the Commonwealth’s funding.

But minutes from a July meeting this year between federal and state infrastructure officials show NSW was yet to commit any money towards the Woy Woy project while the Central Coast Council told the Commonwealth in March it couldn’t afford the Gosford one.

The projects were part of a $660 million commuter car park fund the Coalition used to promise 47 projects ahead of the 2019 federal election. A scathing Auditor-General’s report in June found more than three-quarters of the projects were in Coalition-held electorates.

Sites were nominated by ministers or Coalition MPs and although some asked for information from councils, it was unclear whether those councils knew funding had been sought or approved. The Auditor-General’s office revealed a government-compiled list of the most marginal seats formed the basis for the program.

In the more than two years since the election, three of the 47 projects have been built, construction has begun on another four and six have been cancelled. The federal government says that by the end of 2022, 33 of the projects will either be complete or under construction.

The record of the July meeting between Transport for NSW and the federal Infrastructure Department, obtained under Freedom of Information laws by Labor senator Deb O’Neill, showed design work for the Woy Woy project was still underway.

The total estimated cost, construction start date and planned completion were all marked TBD. Details about community consultation were deemed not applicable, while a section on potential media relating to the project states: “No planned state government events.”

It also showed that while the federal government had committed the $5 million announced in 2019, the state government had not pledged any money to the car park.

The Auditor-General’s report cited a federal department briefing from December 2020 that showed the cost per car space at Woy Woy was anticipated to be $211,429 – 434 per cent above the benchmark. This would put the price for 140 spaces at more than $29 million.

Transport for NSW told The Sydney Morning Herald and The Age on Monday it was helping the federal government identify “potential options” at Woy Woy.

“Timing for delivery is subject to community engagement, approval and release of funding,” a spokeswoman said.

Senator O’Neill said the lack of commitment from NSW more than two years after the announcement demonstrated the scheme’s flaws, with little or no engagement with councils or state governments before projects were chosen.

“It’s an election announcement fund, it’s not even really an infrastructure delivery fund. It’s so poorly designed that the only thing it really delivers to the community is a lie,” she said.

Separately, the Central Coast Council wrote to the federal Infrastructure Department in March this year to say it couldn’t afford to build the car park at Gosford.

In the letter, also released under Freedom of Information, the council’s administrator informed the department the council would have to limit future capital works to ensure its financial recovery.

“Council has consulted with Lucy Wicks (Local Member for Robertson) in relation to its financial position and its inability to proceed with the project,” acting chief executive Rik Hart wrote. “We understand … you will brief the minister (Paul Fletcher) and advise council if the federal government will directly discuss with the state government delivery and ownership of a car park.”

Transport for NSW confirmed the federal government had approached it in April to work on the Gosford project. It is now looking for potential sites and assessing their viability.

announ, car, Future, NSW, of, parks
You may also like: