Bone cancer sufferer and gambling whistleblower Troy Stolz is running as an independent against Labor leader Chris Minns in the NSW election, as the gaming industry maintains its opposition to cashless gaming cards.

Minns holds the seat of Kogarah in south-west Sydney by 0.1 per cent following a redistribution. 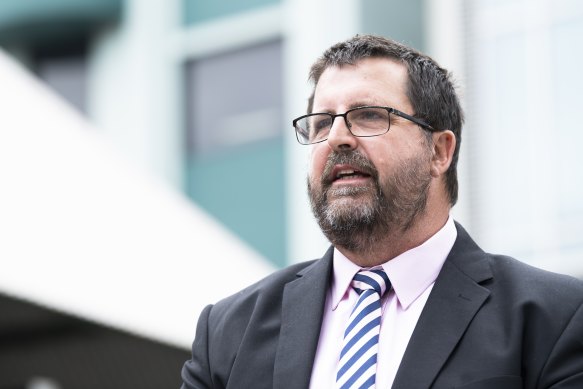 Troy Stolz announces his election run against Chris Minns in the seat of Kogarah in south-west Sydney.Credit:Rhett Wyman

Stolz, who worked as the head of anti-money laundering with ClubsNSW before exposing serious compliance gaps in the industry, is challenging Minns directly on his stance of a voluntary trial of cashless cards before committing to any statewide mandate.

ClubsNSW has responded to Stolz’ allegations by suing him, claiming a breach of confidentiality.

“I had chemo [therapy] yesterday and here I am today. If Chris Minns won’t do it, then it’s up to the independents to step up,” he told reporters on Thursday.

“There’s the appetite for change … I’m at least giving the people of Kogarah the chance to vote around pokie ([reforms], around money laundering and having a safe community.”

“I feel grief that a Labor leader will not stand up to protect those who are vulnerable and to protect the community,” he said.

Stolz’ announcement comes hours after ClubsNSW said mandating cashless gaming cards was not a workable solution, with debate about the technology intensifying ahead of the state election in March.

“We are not convinced that an untested mandatory cashless card is the way to go,” Peponis said on Thursday.

“The international experience demonstrates that forcing players to use cards drives recreational players to other forms of gambling, in particular to unregulated online casinos, and can exacerbate problem gambling.”

A 2022 report from the NSW Crime Commission found billions of dollars in dirty cash were among the $95 billion being funnelled through the machines each year, and recommended removing cash from the mix to improve the situation.

But Peponis said the commission’s recommendation was based on curbing money laundering, not reducing problem gambling.

He referred to ClubsNSW’s 2018 memorandum of understanding with the government to “explore modern payment technologies” as an example of the gaming body’s commitment to a digital wallet.

The state’s first cashless gaming trial commenced in Newcastle in October, with players able to connect their digital wallet via Bluetooth to 36 poker machines, setting spending or time limits.

NSW Premier Dominic Perrottet has committed to introducing cashless gaming if he wins the election.

“There is a problem; we need to fix it,” the premier told reporters on Tuesday.

“We’ll protect jobs on the way through and make sure we don’t have money laundering here in NSW.”