‘You’re a true inspiration!’ GMB surprises 12-year-old who cares for her sick mother with a message from Anthony Joshua

A 12-year-old carer who volunteers as an ambulance service cadet was surprised with a sweet message from Anthony Joshua on GMB.

Jayden Sorhaindo, from Hampton, South West London, was nominated for a Who Cares Wins award by her mother Tash, 42, who lives with Lupus, which is an auto-immune disease and heart failure, and whom the teen looks after.

As they appeared on GMB this morning with hosts Ed Balls and Susanna Reid, whom they met at the awards on November 22, Tash explained Jayden has been training as a cadet with the St John Ambulance service  since she was seven, and helps her with medication and day-to-day chores at home.

Jayden, who knows how to administer first aid and how to use a defibrillator, once got home to find her mother suffering from a brain injury and was able to save her life thanks to her training.

To reward her work, the GMB team got her and Tash’s idol Anthony Joshua to record a message for her, where he told her she deserved her awards, which she received from him and Susanna during a star studded ceremony attended by Vicky Pattinson last week.

Viewers were touched by Jayden’s story and applauded her dedication to her ambulance service training.

As she received her award at the Who Cares Win ceremony, Jayden, who wants to be a heart surgeon when she grows up, addressed her thank you speech to her mother, calling her ‘my inspiration and my aspiration.’

She also opened up about going to school everyday and not knowing whether her mother would still be alive or unwell when she comes back home.

Her emotional speech got Tash ‘chocked up,’ the mother-of-two admitted, as she revealed she didn’t know Jayden would speak about her in her speech.

Anthony Joshua, who handed Jayden her award on stage during the ceremony also recorded a short message for her and Tash, which was shown on today’s GMB. 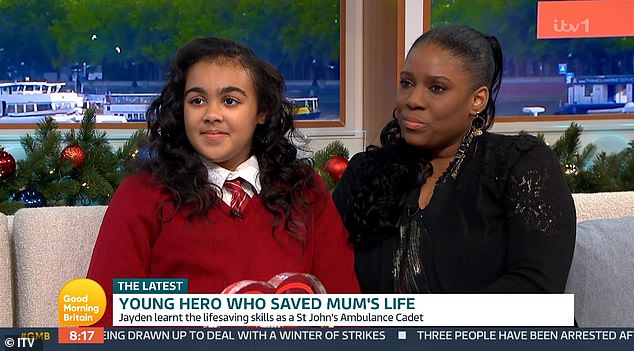 Jayden Sorhaindo, from Hampton, South West London, was nominated for the award by her mother Tash, 42, right, who lives with Lupus, which is an auto-immune disease and heart failure, and whom the teen looks after 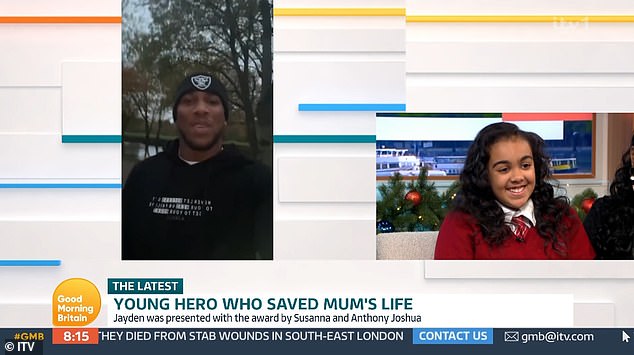 To reward her work, the GMB team got Jayden and Tash’s idol Anthony Joshua to record a message for her, where he told her she deserved her awards, which she received during a star studded ceremony last week 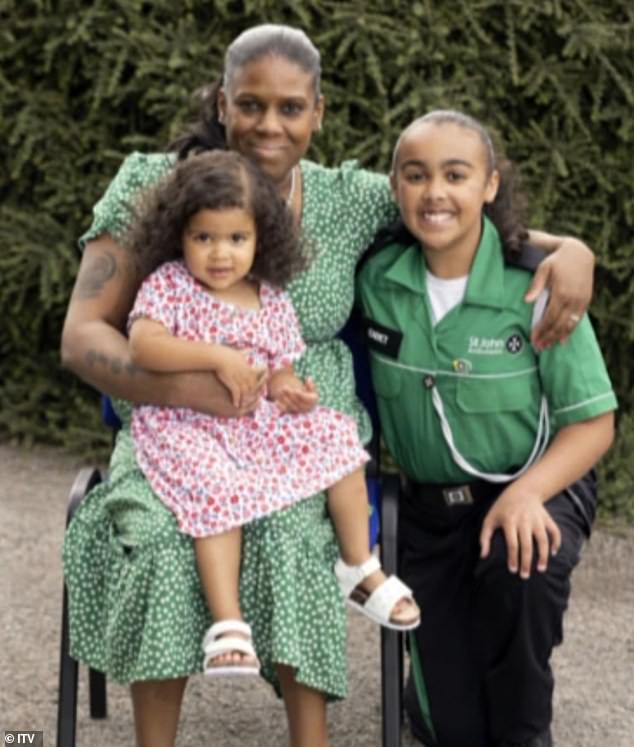 Jayden has been training as a cadet with the St John Ambulance service since she was seven, and helps her with medication and day-today chores at home

In it, the boxing star, who recently said he wouldn’t fight in 2023, said: ‘Jayden, what’s happening? I hope you’re well. It was an honour to meet you at the awards.

‘For sure, you are a true inspiration. Look what you’re doing for your family, family is the most important thing. And for that, I agree, you definitely deserve this award. Take care and look after yourself, say hello to your mum for me,’ he went on.

Jayden and Tash giggled with delight as they watched the video, with the mother-of-two saying it was ‘amazing.’ 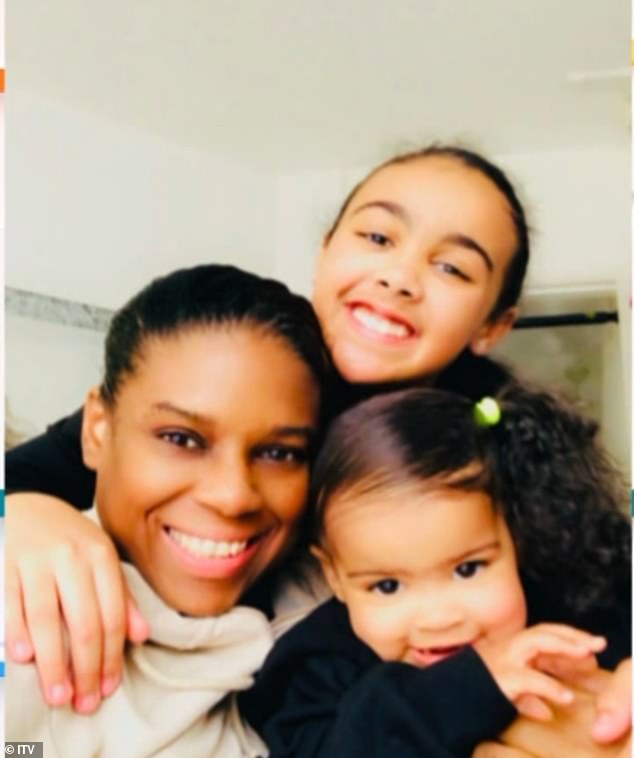 The 12-year-old has been a carer for five years, and helps her other with chores around the house, cooks for her and her sister, three, and helps her take her medication 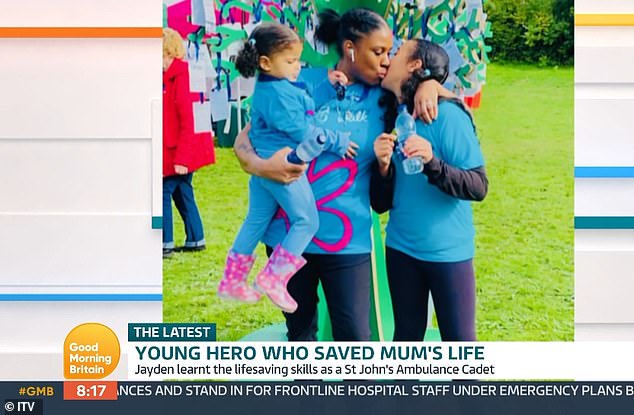 Tash nominated Jayden for the award. She revealed in June that Jayden saved her life thanks to her St John Ambulance training 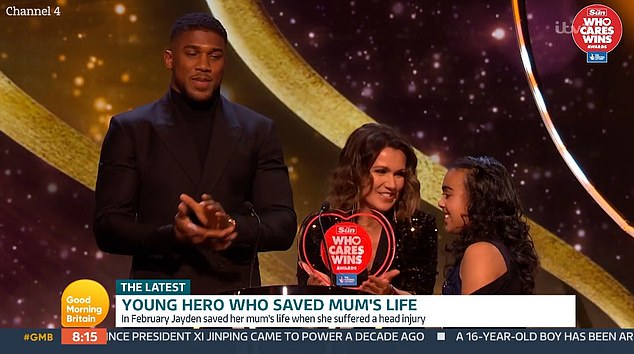 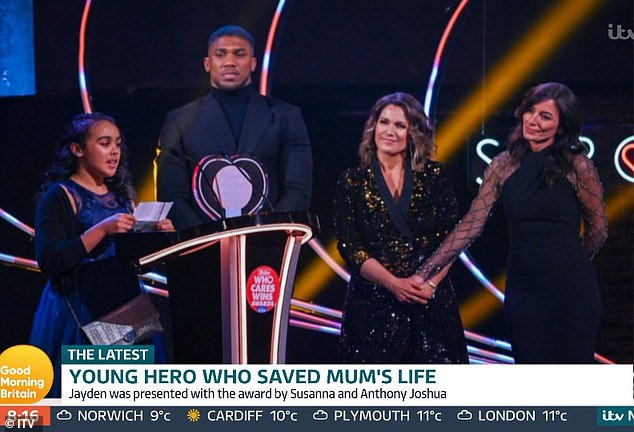 The 12-year-old addressed her heartfelt thank you speech to her mother Tash, calling her ‘my inspiration and my aspiration’

‘It’s such a big thing,’ Jayden said. ‘I’d never thought that someone who’s so big, so celebrity would be speaking to me.’

Tash explained that Jayden began to train with the St John Ambulance Service when she was seven.

‘She will help me with get my medication ready in the morning.  She also will make breakfast for myself and her younger sister, who is three.

‘She helps with chores around the house, and there are days where my speech can get quite bad, so she will speak for me and take calls.’ she added.

Jayden explained she has learned first aid, CPR and how to use a defibrillator through her training with the ambulance service, and that ‘every year you learn more and widen your knowledge of first aid,’ with the training.

‘If I could give this award to all the young carer I would, they all deserve so much,’ the 12-year-old award winner said on the show.

Tash nominated her daughter for the Who Cares Win award in June, and explained Jayden saved her life after she took a bad fall while in the bath and hurt her head.

Jayden came back from school to find her mother unconscious but remained calm and called emergency services right away, saving her mother’s life.

Tash was told anything could have happened if she had not been found, and said: ‘Jayden was taught real-life scenarios, what to do, how to respond, and I can’t put into words the gratitude I have towards St John.’

The young carer told The Sun at the time of her nomination: ‘I got into first aid because my mum’s unwell. I don’t want anyone to be unwell — I just want to help them.’

Watching the mother-daughter duo on GMB, viewers were touched by Jayden’s inspirational story.

‘The world needs more people like Jayden,’ one said.

‘Jayden Sorhaindo – what an amazing girl who looks after her mum,’ one wrote.