Despite a sometimes glitchy, socially distant telecast, the 78th annual Golden Globe awards managed to be political, controversial and also moving. Simone Ledward Boseman’s tears as she accepted the best actor award on behalf of her late husband, Chadwick Boseman, were heartbreaking.

But those tears were a welcome contribution to an already complicated telecast, coming as the Hollywood Foreign Press Association, which votes for the winners, was brutally lashed for its lack of diverse membership, and Cecil B. DeMille lifetime achievement award recipient Jane Fonda spoke of the need to step up to meet the changing times.

“We are a community of story-tellers, storytelling has always been essential,” Fonda said. “They can help us see each other, have empathy. For all our diversity, we are human first.” 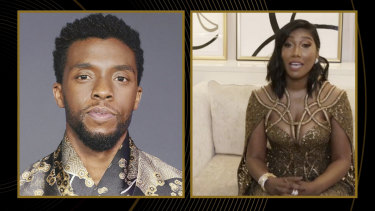 Among the nights most memorable moments: Chloe Zhao’s directing win for Nomadland and audience favourites Schitt’s Creek and The Crown dominating the television categories.

Zhao was one of three women nominated in the best motion picture director category this year. The others were Emerald Fennell (Promising Young Woman) and Regina King (One Night in Miami). The trio were the first female directors nominated since Ava DuVernay in 2014.

The Crown was one of the night’s big winners, along with its stars Josh O’Connor and Emma Corrin, who dazzled as Prince Charles and Princess Diana, and Gillian Anderson, who nearly stole the show with a stunning performance as former British prime minister Margaret Thatcher. 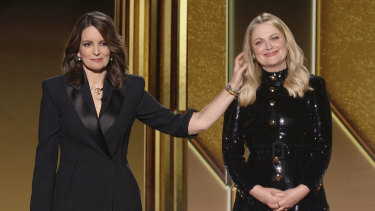 Because of COVID-19, the event was hosted from two locations – Tina Fey was at the Rainbow Room in the Rockefeller Centre in New York City, and Amy Poehler was in the ballroom of the Beverly Hilton Hotel in Los Angeles, where the awards are usually held.

The pair co-hosted using a split-screen. “The technology is so great that you’ll never be able to tell the difference,” Poehler said. The audio feed for the remainder of the telecast did not always agree. 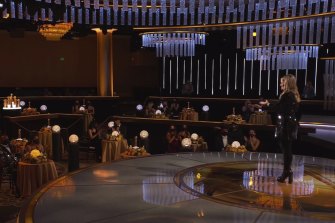 Amy Poehler hosting the 2021 Golden Globes from the ballroom at the Beverly Hilton in Los Angeles.

The multi-camera link between main stage, presenters, nominees and winners was not always perfect. Losing nominees were left in the frame during winner’s speeches and attempts to link multiple locations resulted often in exchanges of “Can you hear me?”

One of the contentious issues during the runup to the awards – the lack of diversity in the membership of the Hollywood Foreign Press Association, which votes for the Globes – became a recurring theme in speeches. 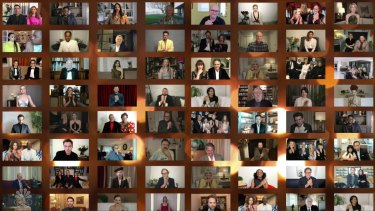 The night of a thousand crosses … the logistically complex link connecting the Golden Globes to its presenters and nominees.

Fey and Poehler made a number of jokes about the awards process itself, describing awards telecasts as “a lot of flashy garbage” which were “a scam invented by Big Red Carpet”. But the pair took a serious tone when they tackled the elephant in the room head on.

“Even with stupid things, inclusivity is important,” Fey said. “Maybe you guys didn’t get the memo because your workplace is the back booth of a French McDonalds. But you’ve got to change that, so here’s to changing it.”

During the telecast the organisation’s president Ali Sar, vice-president Helen Hoehne and former president Meher Tatna also spoke. “We recognise we have our own work to do,” Hoehne said. “We must also ensure everyone from all under-represented communities gets a seat at our table, and we are going to make that happen,” Tatna added.

While the night’s speeches were dominated by discussions around diversity, they were also largely apolitical. One notable exception was screenwriter Aaron Sorkin, who on the best motion picture screenplay award for The Trial of the Chicago 7. The film tells the story of the trial which followed a riot at the 1968 Chicago Democratic National Convention.

“I don’t always agree with what the characters I write do or say, but Abbie [Hoffman, played in the film by Sacha Baron Cohen] said, democracy is not something you believe in or where you hang your hat, but it’s something you do. It’s something you participate. You stop doing it, democracy crumbles,” Sorkin said. “I don’t need anymore evidence beyond what happened on January 6 to agree with this.”

Least surprising win on the night was Catherine O’Hara’s win for best actress in a musical or comedy television series and Schitt’s Creek for best musical or comedy television series. The two wins spared the HFPA from another potentially awkward moment had the controversially nominated program Emily in Paris, or its star, Lily Collins, won in either category. The Los Angeles Times reported last week that the HFPA was gifted a trip to the show’s set in Paris, France.

Another controversial moment was the American film Minari winning best foreign language motion picture. The film, the story of a Korean immigrant family in Arkansas, was pushed out of the main best picture category because it contained more than 50 per cent non-English dialogue.

This year’s Cecil B. DeMille award recipient was actor Jane Fonda. The honorary award is bestowed for outstanding contribution to the world of entertainment; past recipients include legendary director Cecil B. DeMille, Walt Disney, Bing Crosby, Judy Garland, Joan Crawford and director Alfred Hitchcock. The award has been bestowed 67 times previously, but Fonda is only the 16th female recipient.

In her speech, Fonda, who famously made her 1979 Oscar acceptance speech in both sign language and spoken English, addressed the issues of diversity, inclusion and political division. “You know, I have seen a lot of diversity in my long life and at times I have been challenged to understand some of the people I’ve met, but inevitably if my heart is open and I look beneath the surface, I feel kinship,” Fonda said.

The Carol Burnett award, bestowed for outstanding contribution to television, was given to legendary producer Norman Lear, whose credits include the iconic sitcoms All in the Family, Good Times, Maude and The Jeffersons. Its two previous recipients were Carol Burnett and Ellen DeGeneres.

Best actor, miniseries or television motion picture: Mark Ruffalo, I Know This Much Is True

And, contr, Globes, Golden, tears
You may also like: