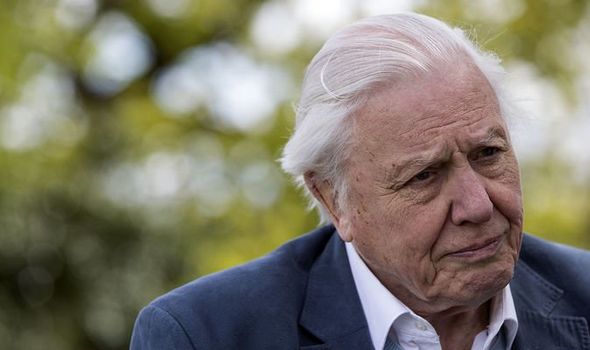 Pictures taken by the charity’s staff show a plastic bag wrapped around a stag’s mouth, a hedgehog entangled in a balloon and a cormorant with a beer-pack plastic ring around its neck. Other snaps capture an abandoned sofa jammed in a tree and a pelican juggling a plastic bottle.

Royal Parks staff revealed that last year nearly 2,000 tons of waste were cleared from its London green spaces, which include Hyde Park and Kensington Gardens.

Sir David, 95, said: “In busy London, the Royal Parks are a haven for wildlife and there are simple things we can all do to protect it and help it thrive.

“Litter, and especially plastic, is a growing danger to wildlife worldwide and we can all help by taking it home or using the bins. Please also leave the wildflowers and fungi, the acorns and dead wood where they are.”

The veteran broadcaster added: “All of them are vital parts of the parks’ ecology.

“Remember to tread lightly and leave no trace of your visit.”

The charity, which manages eight parks, has highlighted the impact of discarded rubbish on wildlife as part of its Help Nature Thrive campaign.

Tom Jarvis, the director of parks at The Royal Parks, said: “Sadly, we’ve all too often seen the devastating impact that dumping litter, leaving BBQs smouldering or treading into protected areas of the parks can have on the environment and wildlife. Taking that moment to decide to clear away a bottle or small piece of plastic rather than leaving it behind could make all the difference to the lives of the parks’ wonderful wildlife.”

He continued: “We work round the clock to keep the parks beautiful, safe places for everyone to enjoy, but keeping the parks litter-free comes with a huge price tag.This is time and money that could be better spent on preserving the natural environment.”

The message came as the Daily Express continues its Green Britain Needs You crusade which aims to protect the environment and to boost the economy.

He collects a bag of rubbish at Seaton Carew beach near Hartlepool “most mornings”.

Geoff said: “As a taxpayer I expect Hartlepool Council to sue me ‑ I want my day in court. We have a beautiful beach, a lot of people use it.Why should kids have to play among wet wipes, panty liners and worse?

“I am asking to send someone down to monitor the situation, pick up what needs picking up.”

The council and Northumbrian Water say the beach is cleaned and monitored regularly.

Exposure to high levels of air pollution over a decade is associated with an increased risk of developing dementia, a study suggests, writes Aine Fox.

The University of Washington followed 4,000 people in Seattle, US, for 40 years. They also studied local levels of fine particulate matter ‑ a pollutant known as PM2.5 ‑ over a decade.

An increase of one microgram per cubic metre in pollution was associated with a 16 percent higher incidence of dementia.

Lead author Dr Rachel Shaffer said: “In other words, individuals exposed to elevated long-term PM2.5 had a higher risk of developing dementia.” The study was published in the journal Environmental Health Perspectives.

Dame Jane, who has documented the lives of chimpanzees for 60 years, said: “If young people don’t get to understand the natural world, they’re not going to want to protect it.”

The findings, from 650 schools, will be shared aboard a ship modelled on Charles Darwin’s HMS Beagle next week.