The Greens have won their fourth seat in federal parliament, with candidate Stephen Bates picking up Brisbane.

The confirmation on Saturday that the Greens have edged ahead of Labor to secure the seat from the Liberals means the party has now won three extra seats – all in inner-Brisbane – to add to the seat of Melbourne. 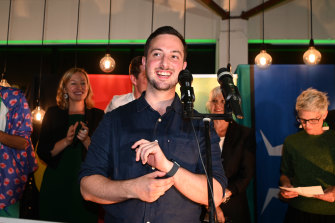 Stephen Bates edged ahead of Labor to win the seat of Brisbane.Credit:Dan Peled/Getty Images

They have also won six senate seats, giving them the balance of power in the Upper House with 12 senators.

Bates, a retail worker, on Saturday said the climate crisis and integrity in politics were key issues that resonated in the community.

“I look forward to working with the community and strongly advocating for action on the big issues we face. There has been an uprising by young people at this election,” he said.

“As one of the youngest members of the new parliament I believe my election is a message that the young people of Australia refuse to be pushed out any longer. We need action on climate, the housing and rental crisis, mental health into Medicare, student debt and job insecurity.”

Greens leader Adam Bandt said the party would be “the most powerful third party in parliament”.

“Stephen’s fantastic win means the Liberals’ defeat is even more profound, and we are in a stronger position to push the Albanese government to take action on climate and inequality,” he said.