Party season is fast approaching, and we’ve got a few Christmases to make up for! So why not try something different this year?’

The passive-aggressive mailout – from one of the home beauty apps I use for keeping up my body admin – has some suggestions for how I could ‘change things up’. These include glitter make-up, festive nail art and a party-season hair restyle. Because, apparently, a new style means a new me. And who doesn’t want to be brand spanking new – crowd-stoppingly different – at this or any time of year? Who doesn’t crave change for change’s sake?

Self-help has built a whole industry around change, made millions promoting this one-size-fits-all life hack – and the narrative is clear. Only through change can we ‘move forward’ and ‘experience exciting new things’. Change helps us to ‘grow’, ‘adapt’, ‘re-evaluate life’ and break free from the shackles of ‘the comfort zone’. 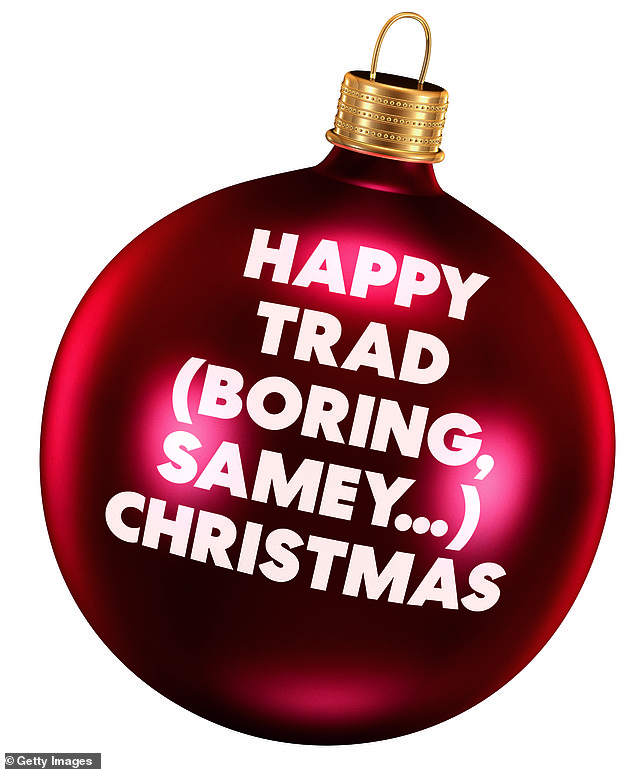 Party season is fast approaching, and we’ve got a few Christmases to make up for! So why not try something different this year?’

Well, I’ve got news for the change buddhas, the ‘as good as a rest’ zealots: I don’t want to try anything different this Christmas. Or in January, for that matter, when we’ll all yet again be bullied into changing our bodies and lives ‘for the better’ in 2023. What I find not just ‘as good as a rest’ but blissfully restful, is staying exactly the same. So how about now and for the foreseeable, we let ourselves off the hook by adopting the Not Embracing Change mantra I’ve always lived by? ‘NECking it’ through the weeks and months ahead? At least until the seas around us calm.

We’ve been through enough change over the past two years. The pandemic taught us how fragile human life can be and robbed us of the daily framework that kept us functional. And yes, there was a brief adrenaline rush at the start of it all, when we realised there would be no office, no family gatherings, no parties, no trips abroad, and we had to find a way to embrace all of those changes. But after that excitement had passed we were left feeling unsteady, unmoored – if not in freefall.

Things haven’t exactly gone back to the way they were, either. We’ve seen Russia’s illegal war in Ukraine claim thousands of lives and imperil the world. We’ve lost the Queen – our nation’s grandmother. A colleague put things in perspective recently when he tweeted: ‘My son has lived through four chancellors, three home secretaries, three prime ministers and two monarchs. He’s four months old.’

This Christmas looks likely to be as chaotic as the last two, but while we’re powerless over all this external change, we can control the daily minutiae of our own lives. So what if NECking it is the answer? It’s worked for me.

It’s a running joke with my oldest friends (frankly they should be happy I haven’t traded them in for progressive new models) – but they have a point. I’ll always suggest meeting in one of three London bars, where I can be sure we’ll get both a seat and a vodka martini that hasn’t been polluted with excessive quantities of vermouth. I like to holiday in the same places at the same time of year, and I’ve always painted the walls of every property I’ve lived in the same three Farrow & Ball colours (Setting Plaster, Skylight and Dimity). Wild, aren’t I?

I haven’t changed my hair colour or style since I was 16. Ever since a dermatologist told me to ‘stick to Avène and No7 and you’ll be fine’ I’ve scarcely changed my skincare either – the only exception to that rule being the inclusion of retinol (which, as it turns out, really is as good as a rest). And on the odd occasions when I’ve been bullied into deviating from one of the only two nail shades I’ve worn in rotation since circa 1986 (OPI Got The Blues For Red and Essie Pillow Talk) I’ve always left the salon thinking: ‘Why did I do that?’

The same goes for my wardrobe. I’m viscerally against ‘if you haven’t worn it in a year, bag it up for Oxfam’ thinking. As though we’re all suffering from some clothing-related form of ADD and couldn’t possibly remain enthusiastic about any particular piece for longer than a night. I’ve rediscovered dresses and cowboy boots I haven’t worn in two decades with more joy than chance encounters with long-lost friends. And if I do fall in love with a particular staple, I’ll often buy back-ups while it’s still on the shelves.

In my early 30s, I became consumed with such fear that Paul & Joe would discontinue my favourite ‘Poppy’ lipstick that I bought up every tube I could find online. Months later, tiny packages bearing extortionate customs surcharges were still arriving from Istanbul and Tokyo. My then boyfriend thought I’d lost my mind, but shortly afterwards Paul & Joe discontinued the lipstick… to make way for new and exciting lip colours. To change things up.

Tradition can be a weight around our necks at this time of year, granted. It’s the ritual of it, the prospect of hamster-wheeling your way through December in a Rixo sequined dress. Putting in the turkey order, booking the panto, going to the same parties with the same people. That familiar countdown to the day itself when everything has to be exactly the way it has always been. You can see why change appeals.

A few years ago, I had an uncharacteristic wobble and swapped one of our traditional Christmas dinner trimmings for something new, exciting, different. Nobody really cares about the braised red cabbage, I reasoned, going with a boundary-pushing, comfort-zone blasting tahini coleslaw. Thanks, Jamie Oliver. The abject panic on my husband’s face when he scoured the table for his cabbage! As though he’d been put in a Formula 1 car beside Lewis Hamilton without a seatbelt. Apparently ‘Christmas isn’t Christmas without the red cabbage’. And after a few seconds of incredulity, I thought: of course it’s not. You of all people know this. Tradition, ritual; they can be boring as hell, but they tether us to our lives and the past. They’re a constant when nothing else can be relied upon to stay the same. The fact that braised cabbage tastes like sour sawdust isn’t the point.

There’s something else. A genuine worry about what this restlessness says about us. That the permanent itch beneath our skin has been brought on in part by social media and a strain of Fomo is obvious. We’re now all constantly scrolling through life for The Answer (although nobody knows what the question is). But it’s the insecurity about our own desires that worries me most. Of course there are wonderful foods, lands, people, experiences, cosmetics and trench coats out there to be discovered. But don’t you also reach an age where you’re reconciled to the fact that short hair will never suit you – and that you will never enjoy comedy clubs? On such occasions, NECking it is just another way of saying: ‘I’m OK with who I am, thanks. But loving your festive nail art.’