Holby City spoilers: It’s Dominic v Holby as he takes on the hospital 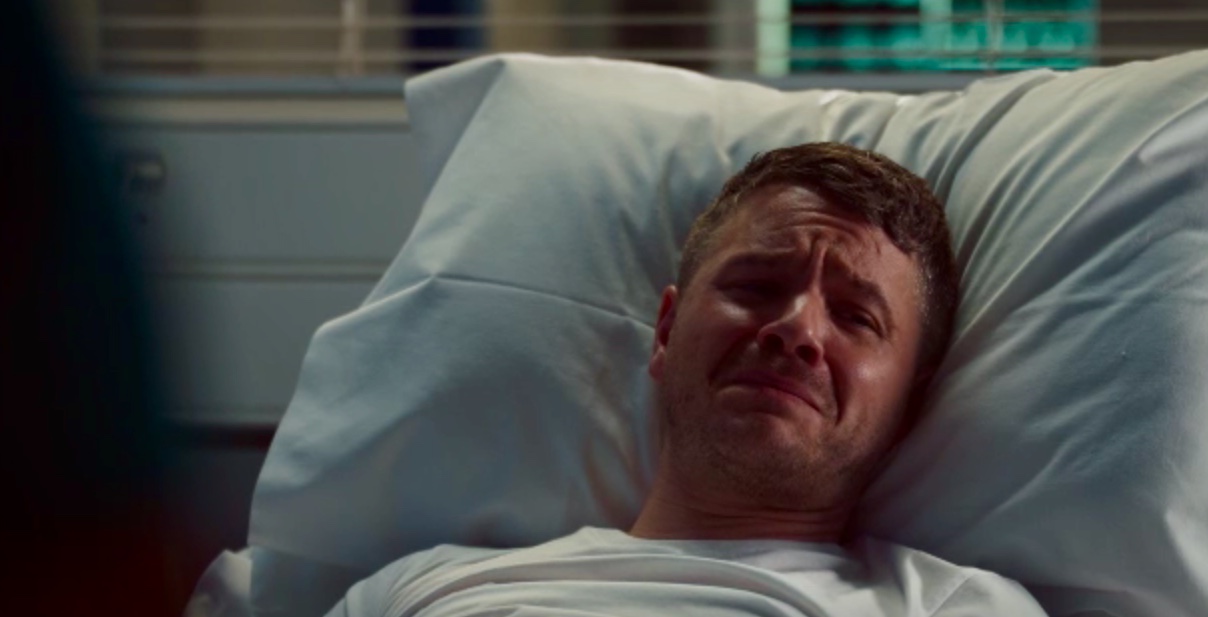 Dominic (David Ames) tried to get back on the dating scene in tonight’s Holby City – but considering he’s only just had massive surgery that’s left him with a stoma bag and his wounds hadn’t yet healed, that was never going to be a good idea. He was half trying to pretend to himself that nothing had changed, and half testing the date’s reaction to a hypothetical stoma bag situation. But when the man went to casually touch Dom he recoiled in pain – and realised he was bleeding.

Back at the hospital, Sacha (Bob Barrett) had to operate on him to fix up the damage, which he managed successfully. Afterwards, Sacha apologised to his old friend for what had happened. He blamed himself for bringing Jodie into everyone’s lives. Sacha talked about pulling Dominic from the car crash, thinking he’d bleed to death if they waited for the fire brigade, as Hanssen had wanted. Dominic greeted this information by accusing Sacha of wanting to play the hero. ‘I saved your life,’ Sacha protested. ‘No,’ said Dominic. ‘You destroyed it and nothing will ever make that right.’

Dominic has now gone on the attack, deciding to sue the hospital for as much as he can get. If he goes through with it, it sets up the scenario of Hanssen possibly having to give evidence against Sacha.

This is all one worry too many for Max (Jo Martin), who is once again resorting to paying for agency staff on her own credit card after her son Louis (Tyler Luke Cunningham) told her the staff all blame her for the current lack of staff.

Meanwhile, at least Donna (Jaye Jacobs) and Alex (Miles Mitchell) were happy, having decided to give in to their feelings for each other. But it turns out that their patient Mr Edwards (Callum Callaghan) is indeed the man who ran into Xavier on his bike. Alex worked this out after Mr Edwards made some remark about Xavier. A heart problem led to Mr Edwards being relocated to Darwin, where it wasn’t long before he set eyes on Cameron (Nic Jackman) – whom he instantly recognised. ‘It’s you – from the accident,’ he said. ‘You took his bag.’ What lengths will Cameron have to go to now, to ensure that Mr Edwards doesn’t tell everyone that he was there when Zav died? He’s capable of anything.

Even fatherhood, it seems, as Nicky (Belinda Owusu) discovered this week that she’s pregnant. This came as a shock, because she’d had a negative test. But it was a false negative caused by her heart medication, and when she gave herself a quick ultrasound scan the evidence was undeniable. How this will impact on her health and how it will impact on her weird boyfriend remains to be seen.

When Sahira (Laila Rouass) was first on Holby she used to go on a lot about ‘my son Indy.’ We met one of her sons tonight, but it wasn’t Indy, who chose to stay at home. The other son was brought to Pulses by her husband Rafi (Zubin Varla), who is indulging in industrial-strength sulking after she had an affair and he threw her out.

He told her kids that leaving was her decision – hence Indy not wanting to talk to her. Kian (Ramin Karimloo) wasn’t impressed by Rafi. ‘What a charmer. I can see why you cheated on him.’

Sue Haasler is the author of five novels and the official BBC Holby City book, which you can read about here.

Join the community by leaving a comment below and stay updated on all things soaps at our homepage.

city, Domi, Holby, It’s, spoilers
You may also like: