When Prince Harry and Meghan Markle announced the birth of their daughter on June 6, 2021, much was made of the little princess’ name, Lilibet Diana, nicknamed Lili. The name pays tribute to both the baby’s great-grandmother and grandmother on her father’s side. However, the baby also honors her maternal grandmother, Meghan’s mother, Doria Ragland.

Lilibet is the nickname Queen Elizabeth had since she was a small child. As the story goes, Princess Elizabeth had trouble pronouncing her own name and was only able to say “Lilibet,” so her family began calling her by that name. The name stuck around throughout her life as it was what her late husband, Prince Philip, who died in April of 2021, called her, according to Tatler. And the middle name, Diana, of course, honors Harry’s late mother who would have turned 60 this summer. However, it’s the baby’s nickname that has symbolic meaning for Meghan and her mom (via People). 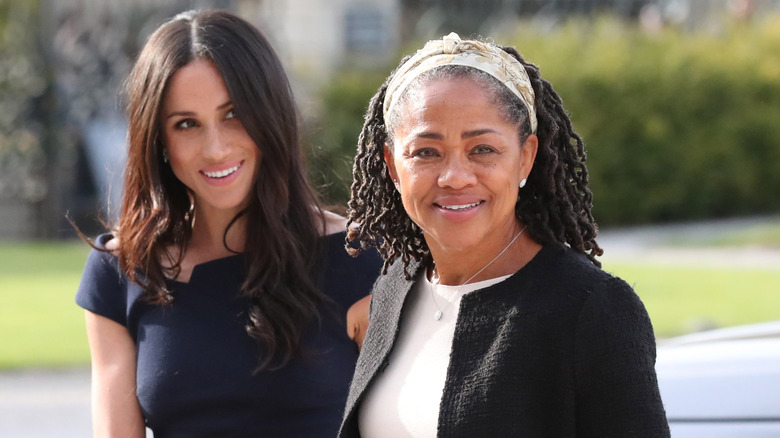 When Meghan Markle was growing up, her mother had several nicknames for her: Meg, MM, M&M, and flower, according to People. As we know, a lily is a flower, although spelled differently. Ragland, a Hollywood makeup artist, can be close to her grandson, Archie, and her brand new granddaughter, Lili, now that the Duke and Duchess of Sussex live near her in Southern California.

Lilies also have meaning within the royal family, at least through Harry. Princess Diana walked down the aisle to wed Prince Charles in 1981 holding a Lily of the Valley bouquet. Mehgan later did the same in 2018 during her walk down the aisle to marry Prince Harry.

The sweet new princess was born on June 4, 2021. When her parents announced her arrival two days later, they used the name “Lili” in their official statement, which reads:

“Lili was born on Friday, June 4 at 11:40 a.m. in the trusted care of the doctors and staff at Santa Barbara Cottage Hospital in Santa Barbara, CA. She weighed 7 lbs 11 oz. Both mother and child are healthy and well, and settling in at home,” the couple said. “Lili is named after her great-grandmother, Her Majesty The Queen, whose family nickname is Lilibet. Her middle name, Diana, was chosen to honor her beloved late grandmother, The Princess of Wales.” (via People).

also, Baby, How, Lili's, name, Pays
You may also like: