Move over size zero! After Nicole Kidman, 55, flaunts her VERY toned arms on a magazine cover, FEMAIL explores how Michelle Obama sparked the fitness trend – and even Kate Middleton is in on it

Forget Botox and expensive couture: the new status symbols for rich and powerful women are their toned, rock-hard arms.

At 55, Nicole Kidman certainly got the memo as she was snapped flaunting her extra-buff physique on the cover of Perfect Magazine.

And fans barely noticed Chris Hemsworth beefing up amid the real talking point of Thor: Love and Thunder earlier this month, as Natalie Portman showed off her throbbing biceps as Female Thor.

Meanwhile, stylish royals have been leading this health-conscious trend, with Kate Middleton, 40 and Queen Letizia of Spain, 49, showing off their toned limbs in tank tops and sleeveless dresses.

Historically, lithe and women that looked dainty and naturally thin were the body goals, but an increased interest in fitness, and the growing popularity of weight-lifting and Pilates workout have made the toned body the new size 2. 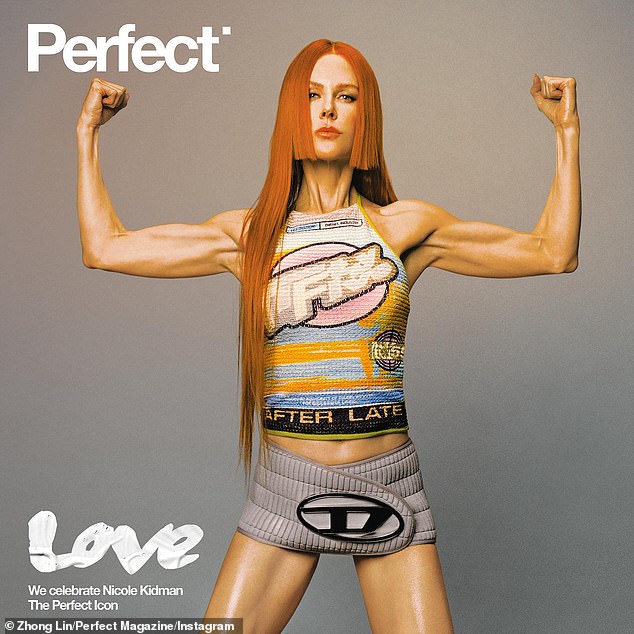 At 55, Nicole Kidman certainly got the memo as she was snapped flaunting her extra-buff physique on the cover of Perfect Magazine. 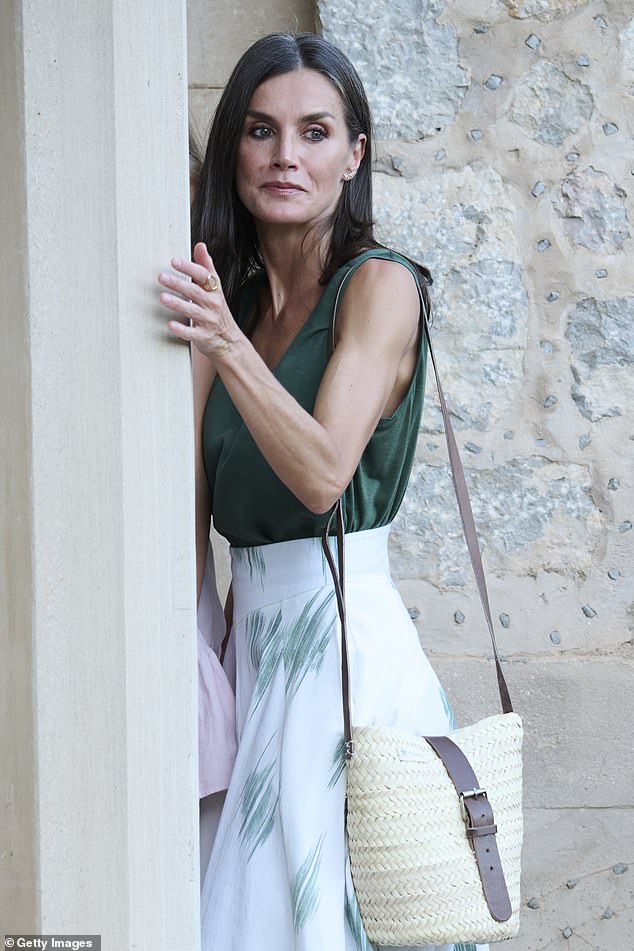 Stylish royals have been leading this health-conscious trend, with Queen Letizia of Spain, 49, daring sleeveless looks on the regular (pictured in Cartuja de Valldemossa earlier this month)

Throughout the 20th century, beauty standards for the female form have oscillated between the androgenic and tall maiden and the homely, ultra feminine curvy silhouette.

But muscles were not particularly perceived as feminine or something women should aspire to have.

Nicole Kidman caused a serious stir with her latest magazine shoot, which saw her proudly flexing her ripped biceps and flaunting her toned abs while posing in a micro mini skirt and crop top.

Looking decades younger than her 55 years, the Oscar-winning actress and mother-of-four struck an incredibly strong stance while posing for the cover of Perfect magazine – which hailed Nicole as ‘the perfect icon’. 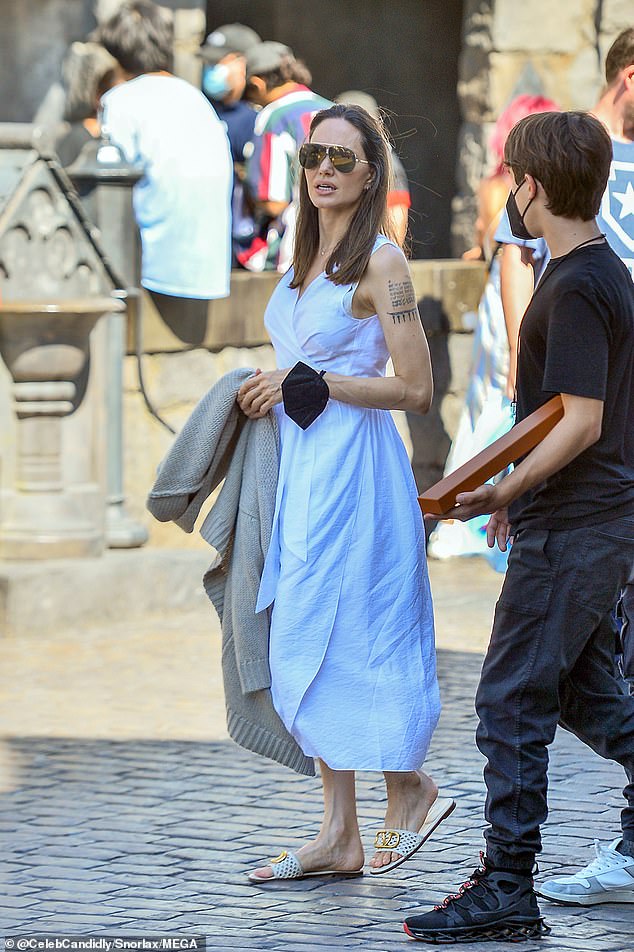 Angelina Jolie, 47, is another celebrity who likes to prize herself on her arms. Pictured during a family trip to the Universal Studios in California 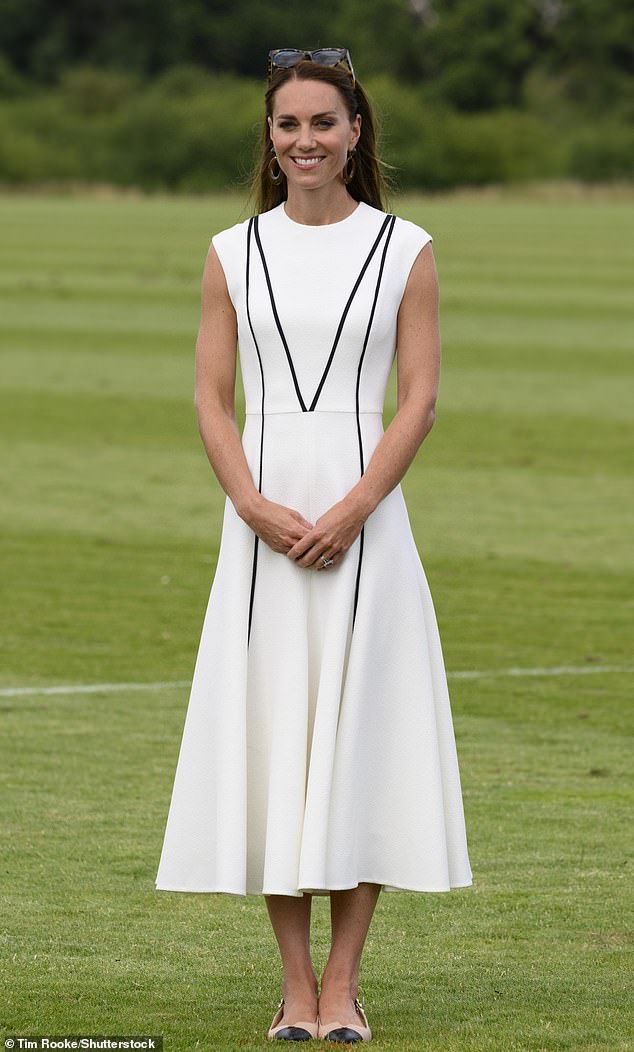 Even British royalty are doing it, with the Duchess of Cambridge showing off her toned arms at the polo on 14 July in a £1,350 Emilia Wickstead dress

Standing with her fists raised and her biceps flexed, the actress also revealed her perfectly chiseled legs in the shoot, posing in a micro mini Diesel skirt that could well be mistaken for a belt, as well as a form-fitting halterneck shirt by the same brand.

Nicole is the picture of confidence in the image, staring down the camera with a striking pout as the photographer snapped away.

The cover photo is one of a series of avant-garde images taken by photographer Zhong Lin for the third issue of Perfect magazine, which celebrates pop culture’s greatest icons.

But decades ago, buff women were seen as unfeminine and high profile women especially went out of their way to look as soft and lithe as possible.

After World War I, and with women entering the work force, the fashion was the androgenic ‘flapper,’ look, which consisted of a graceful silhouette with dainty features and small to non-existent curves.

But after World War II, and in spite of a newfound respect in female strength following the war effort, a more feminine look was promoted, with pin ups a-la Marylin Monroe and Jean Harlow being touted as the most desirable look. 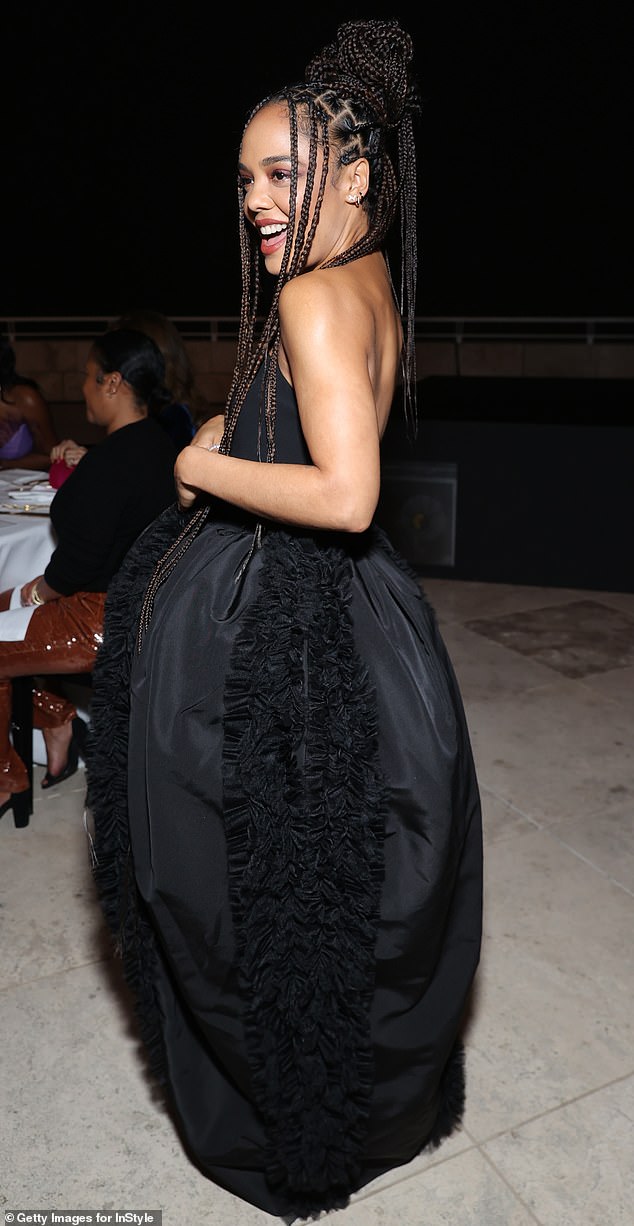 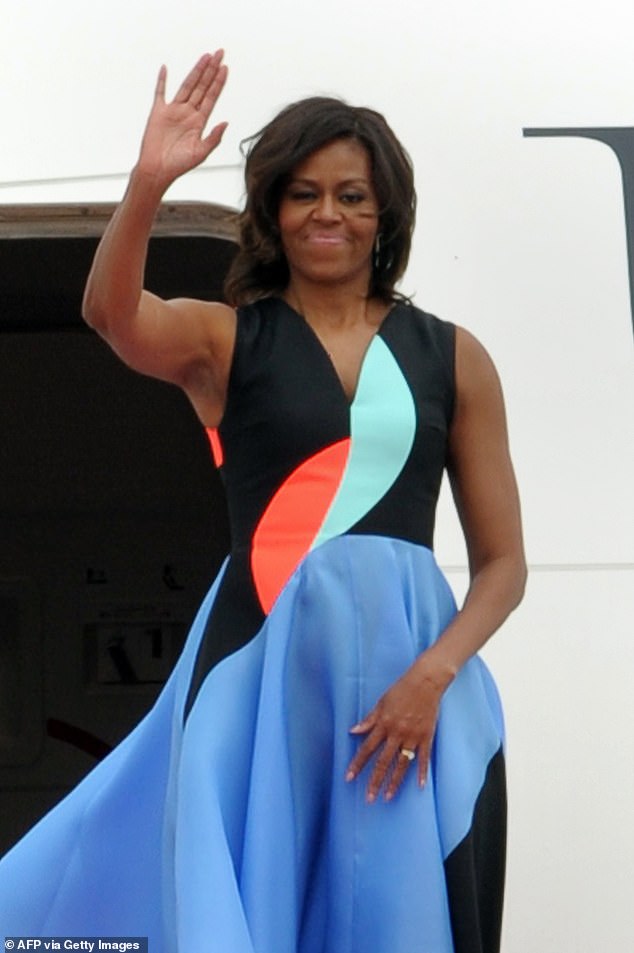 The OG arm queen: Michelle Obama made toned arms an enviable thing when she posed in a sleeveless dress in her official portrait as US First Lady in 2009 (pictured in 2015) 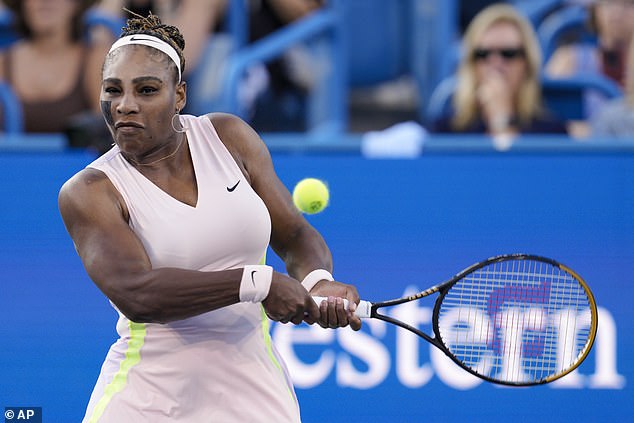 The 1970s brought on a new waves of beauty standards, with Farrah Fawcett embodied the ideal body: slim, tanned and effortlessly healthy.

However, the 1980s’ workout VHS craze, with the likes of Jane Fonda and Cindy Crawford ‘feeling the burn’ and touting exercise as the secret of their good looks, saw a new generation of women work out at home, and made fitness trendy.

But the ‘buff’ look, with well-defined triceps and biceps were still perceived as masculine and tomboyish.

Render unto Caesar, the woman who made toned arms an enviable look in the modern age is none other than the former US first lady, Michelle Obama.

Being 44 when her husband Barack was put into office in 2008, the mother-of-two made children’s health a focal point of her time in the White House.

She created the Let’s Move campaign to combat childhood obesity around the US, enlisting the help of big names like Beyoncé to get kids moving, dancing and grooving. 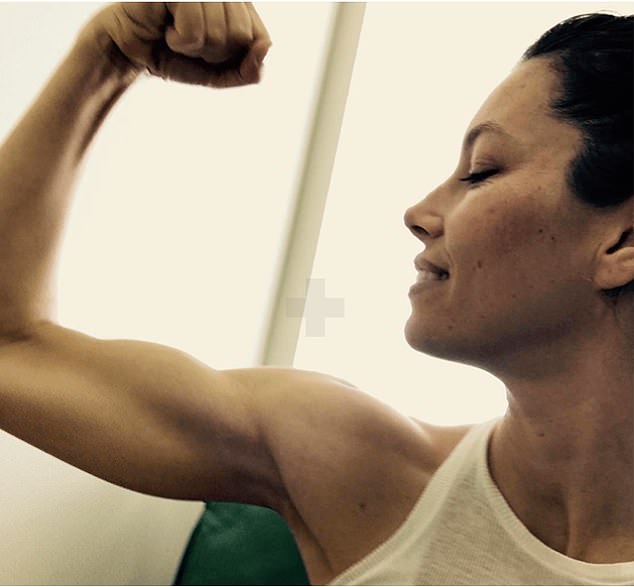 Actress Jessica Biel likes to say she ‘takes fitness very seriously,’ and it shows when she flexes her arms on Instagram

But her message also extended to mothers, something using her own body and tip-top shape to drive home the message.

She proudly posed in a sleeveless dress for her official photo as First Lady in 2009 making her sleekly sculpted upper arms mainstream in the process.

During a skit with the ever-popular late night talk show host Jimmy Kimmel in 2013, she even came out swinging in a segment entitled ‘Mum dancing’, where she showed her moves.

One of the moves was named: ‘I can still do this dance because my arms are still in shape.’

The former first lady was quite dedicated to her arms and kept in shape with an unforgiving workout routine. 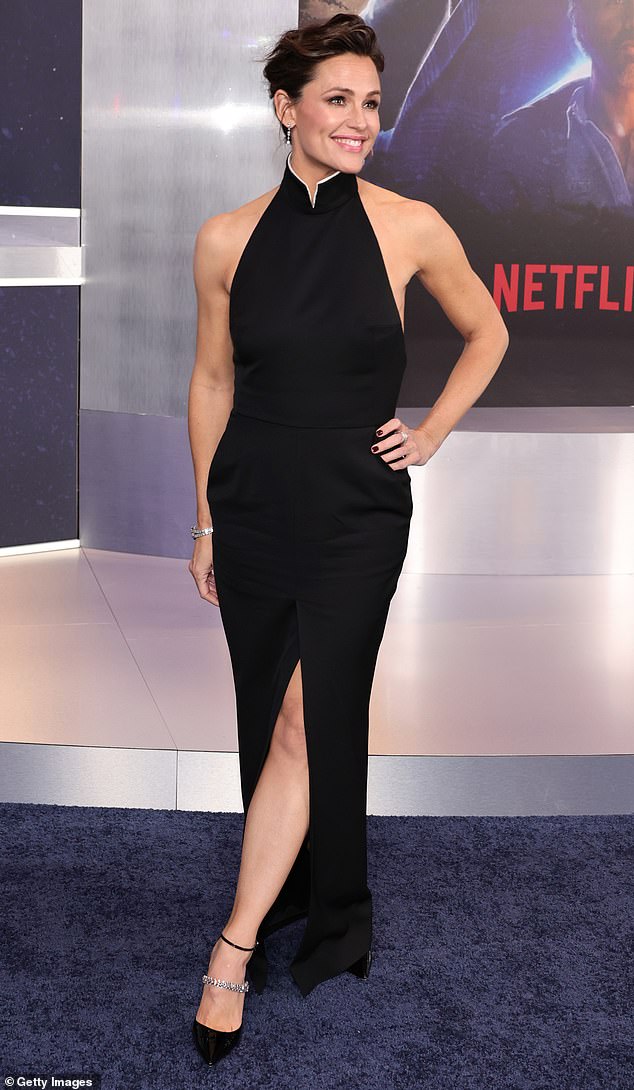 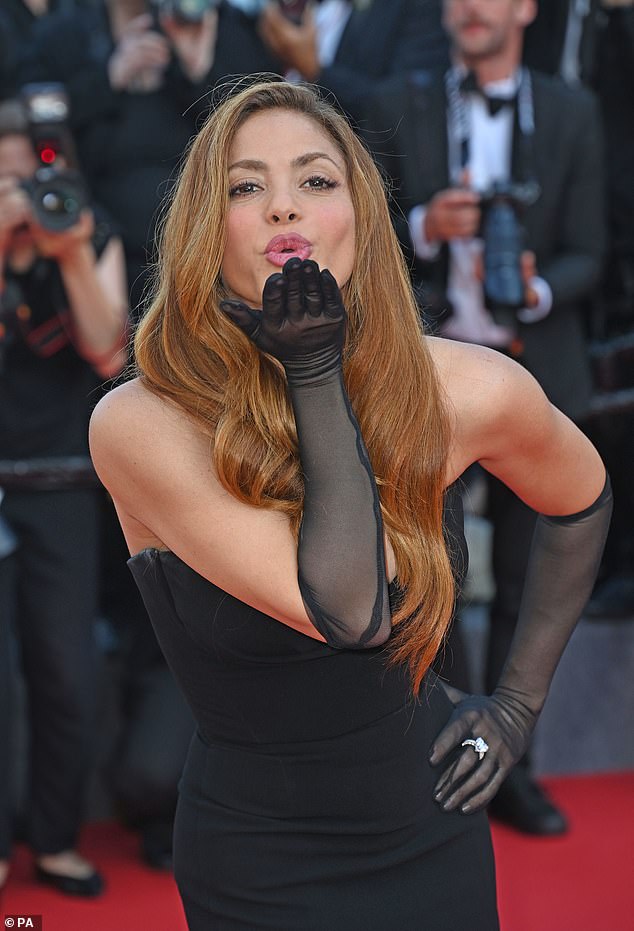 Before her split from Gerard Piqué, Shakira was spotted working her buff biceps out on the Cannes red carpet in May

The mother-of-two revealed her workout regime includes skipping, boxing and weight-training, while the Duchess of Cambridge is known to be proficient at tennis, hockey and skiing.

Now, toned arms are seen as a symbol of health, and have became trendy in the highest of circles, with Kate Middleton and Queen Letizia showing off their toned triceps during official engagements.

The Duchess of Cambridge regaled fans with her toned physique in a sleeveless Emilia Wickstead during a polo match in July, her taut triceps and biceps gained as much admiration as the £1,350 gown.

And mother-of-two Letizia has been regularly snapped showing off her toned arms, with her limbs earning her the admiration of royal fans worldwide. 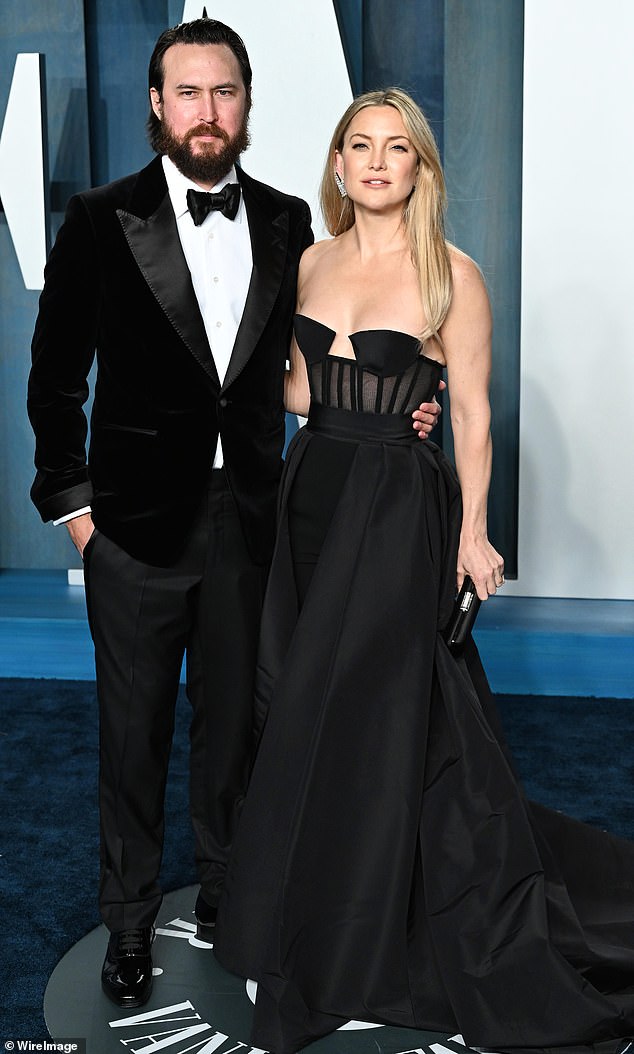 Actress Kate Hudson, 43, is also keen on fitness and showed all well-defined triceps at the Vanity Fair  Oscar Party last March, which she attended with her partner Danny Fujikawa

Toned arms have also made it to the big screen, with Natalie Portman showing off the arms that launched a thousand headlines in a trailer ahead of the release of Thor: Love and Thunder.

Her muscly limbs testified of a change in attitude towards female bodies in Hollywood, with the actress remarking she had been asked to get ‘as big as possible’ to play the action-packed role.

This was a stark contrast from her fitness regime for her Oscar-nominated performance in Black Swan, for which the actress was asked to get ‘as small as possible,’ she told Variety.

She revealed she had to stick to a high-protein meal plan to fuel her workouts, training for 90 minutes to two hours a day, five days a week for a total of ten months to develop the buff biceps. 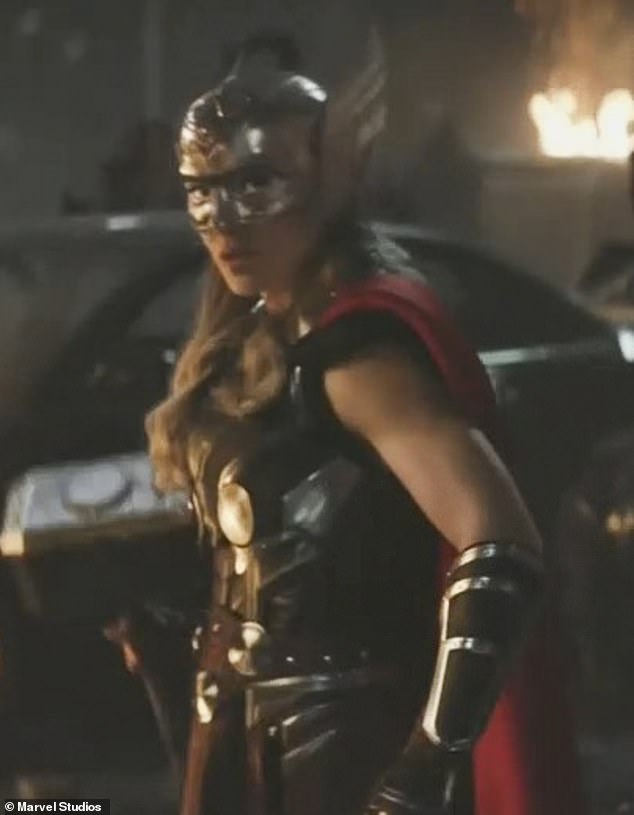