Follow
Home » Lifestyle » ‘How I get myself through’: Inside Michelle Obama’s book of life lessons

Michelle Obama could simply have done a line of activewear with “when they go low, we go high” bedazzled onto it (you can already buy them online, she’d only have had to ask). Or an Instagram account with the life lessons in this book pasted onto posters: her father’s dictum that “no one can make you feel bad if you feel good about yourself”; the importance of “starting kind”; the exhortation to uncover our “light”.

Or she could have written a self-help book, probably in her sleep. But there’s no excitable punctuation and glib life advice here. The Light We Carry is a glimpse into Obama’s “personal toolbox … a series of honest reflections on what my life has taught me so far, the levers and hydraulics of how I get myself through.” 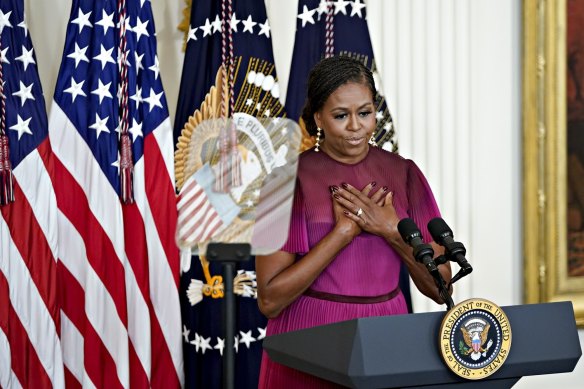 Michelle Obama is careful to say her relationship with her husband isn’t perfect, but they do seem closely synced.Credit:Bloomberg

She pitches these stories at a relatable, domestic level: tales of her mother’s parenting wisdom, or her own “Kitchen Table” of supportive friends, and the weekend boot camps she put them through in the guise of socialising (“I guess you might say that vigor is one of my love languages”). The focus soon widens, though.

Any time we’re at risk of self-actualisation for its own sake, Obama swings us back to her key concern: how can these skills help us make a better world for all? Her version of self-care is the American poet and feminist, Audre Lorde’s: self-preservation, and thus a political act. When she guides us through “decoding fear” or “partnering well” (the secret is – wait for it – compromise and communication), it’s to empower us to engage with bigger issues: discrimination, division – in our own relationships or our communities.

“When we avoid what’s new or different,” she warns, “we may cluster in communities built on sameness; we may embrace conformity as a type of comfort, a means of avoiding fear”. And then we need to question our reactions to newness: “Why did you cross the street at the sight of a Black boy in a hoodie? … What causes you to feel threatened by two men kissing on the street?”

An anecdote about Barack’s imperfections (apparently he struggles with punctuality, and leaves the butter out of the fridge) becomes a treatise on addressing bitter political and racial divides. The micro is always in service to the macro, though it’s hilarious hearing how Barack once bullet-pointed his reasons why they should date, looking at her over fingers tented in true pre-presidential style. 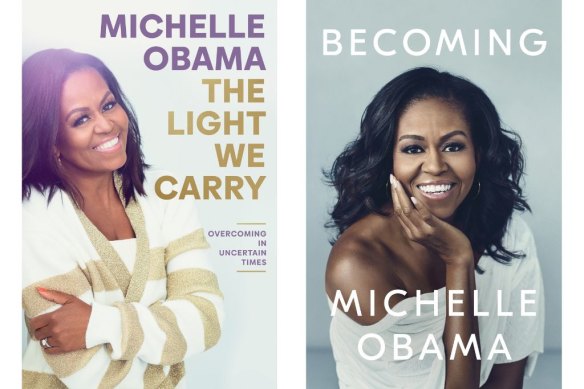 She’s careful to say that their relationship isn’t perfect, but they do seem closely synced: “Barack and I had always tried to operate on the principles of hope and hard work … believing that most of us shared common goals, that progress could be made and measured, however incrementally, over time. Sure, maybe that’s an earnest, hopeful story, but we invested in it.”

It is an earnest book – despite the fireside chat feel, it reads like a long-form TED talk, each point inexorably brought home – but she’s earned that. She raised her children in a place where the butlers were always Black, but never the president. When she talks about fear, as a Black girl growing up on the South Side of Chicago, you believe her. Or loneliness, as someone who’s been the only one of her kind in many rooms – Harvard, the White House – it carries weight. And the insights she shares will have special power for those who’ve felt, as she says, that their acceptance into these spaces of power is “forever conditional”.

Her thoughts on the complicated legacy of her encouragement to “go high” are illuminating. It’s about operating with integrity, and living with love, she says, but it’s never simple, especially for marginalised people. Faced with injustice and brutality, “Why, people rightly wonder, do we need to try to be so reasonable all the time?”

But reason still leaves room for emotion, Obama explains. She talks about realising that the hurt and rage she felt at Trump’s election needed to be elevated into “some sort of actionable plan” if the fight was to continue.

She takes us behind the “glitter” of the Obama spectacle, to feel the quiet, earnest glow of her inner strength, because in the end, the light we carry is always for sharing: “We become bolder in brightness.”

The Light We Carry by Michelle Obama is published by Viking, $55.

Hilary Harper is a presenter of ABC RN’s Life Matters.