Bolted in place atop the massive B-2 test stand at NASA’s Stennis Space Center in Mississippi, the upgraded Aerojet Rocketdyne RS-25 engines are scheduled to fire for a full eight minutes starting around 5 p.m. EST, the same duration needed for an actual flight.

Including shuttle flights and post-shuttle ground tests, RS-25 engines have been started more than 3,000 times to date and fired for more than 18,000 minutes all told, but never four at once and never with a rocket the size of the SLS. The goal is to test the stage’s performance as a whole under flight conditions. 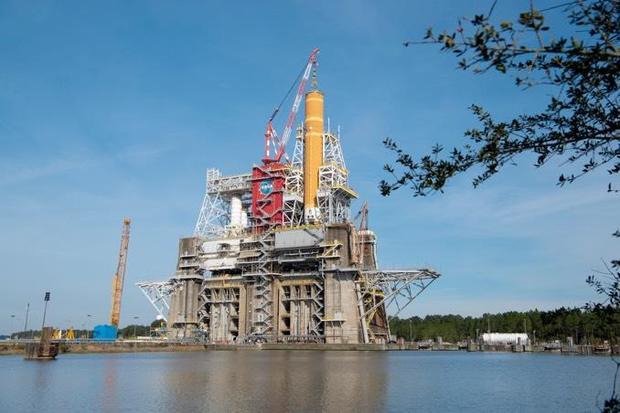 “This will be our first test simultaneously firing all four RS-25 engines in this new Space Launch System configuration,” said Jeff Zotti, Aerojet Rocketdyne RS-25 program director. “We’re all looking forward to seeing the core stage of the world’s most powerful rocket fire up for the very first time.”

The flight version of the SLS will include two 17-story-tall Northrop Grumman solid-fuel strap-on boosters, each one generating 3.6 million pounds of thrust; the four RS-25s, generating a combined 1.6 million pounds of push; a hydrogen-fueled second stage; an Orion crew capsule and an emergency escape system.

With the stage locked down on the test stand throughout, new state-of-the-art engine computers will throttle the main engines down to 95% thrust about a minute into the test. They will do the same during an actual flight to reduce stresses on the rocket when it passes through the region of maximum aerodynamic pressure.

The 7,775-pound engines, which earlier helped power 21 shuttle launches, also will hydraulically gimbal, or move to commanded positions at specified times, to verify their ability to precisely steer the rocket during the climb to space, both early in flight and later in the ascent.

The engine nozzles feature new insulation to protect them from the heat they will eventually experience from the nearby 5,000-degree solid rocket booster exhaust plumes. 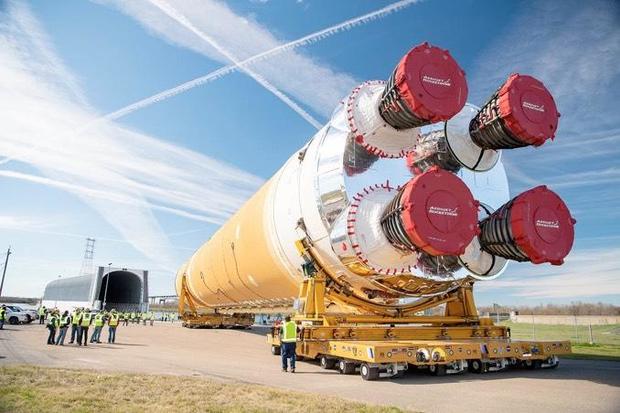 Throughout the ground-shaking test, sensors will monitor other stresses and strains, temperatures, propellant flow rates, pressures and a variety of other parameters to make sure the rocket is ready for launch on the first Artemis moon mission late this year.

Equally important, the test will verify the performance of the rocket’s complex flight computer system and software along with pre-flight propellant management and safety systems.

“The test is scheduled for 485 seconds,” said Julie Bassler, SLS core stage manager at NASA’s Marshall Space Flight Center in Huntsville, Alabama. “The stage is instrumented with over 1,400 sensors including pressure, temperature, accelerometers and strain gauges.”

“With this hot fire, there’s a lot of data, including how the avionics and software command and control will perform with the integrated core stage and engine propulsion system,” Bassler said, adding, “This green run test is the first time we fire up this core stage. So this is a huge milestone for us.”

Said Boeing SLS program manager John Shannon, a former space shuttle flight director: “This is the most heavily instrumented vehicle we will ever fly. So we’ll get a tremendous amount of engineering data.”

The next time the Space Launch System core stage will be fired is during the launch of #Artemis I, the first integrated flight of SLS and @NASA_Orion, and the first mission of the agency’s Artemis program.

Assuming the green run test goes well and no major problems are encountered, NASA managers hope to ship the SLS stage by barge to the Kennedy Space Center in February.

Once there, the stage will be attached to two solid-fuel boosters currently being assembled, or “stacked,” on a mobile launch platform in the cavernous Vehicle Assembly Building. The already complete upper stage will be mounted atop the core and the rocket will be topped off by a Lockheed Martin Orion crew capsule and its emergency escape system.

The assembled rocket and its launch platform then will be hauled to pad 39B by powerful crawler-transporter and prepared for flight. Unlike SpaceX rockets and others under development, the SLS is not reusable and the first stage booster and its engines will be destroyed when they fall back into the atmosphere after the climb to space.

NASA hopes to launch the rocket on its maiden flight late this year, sending the unpiloted Orion capsule on a flight 40,000 miles beyond the moon and back. What happens after that will depend in large part on how the Biden administration prioritizes space. 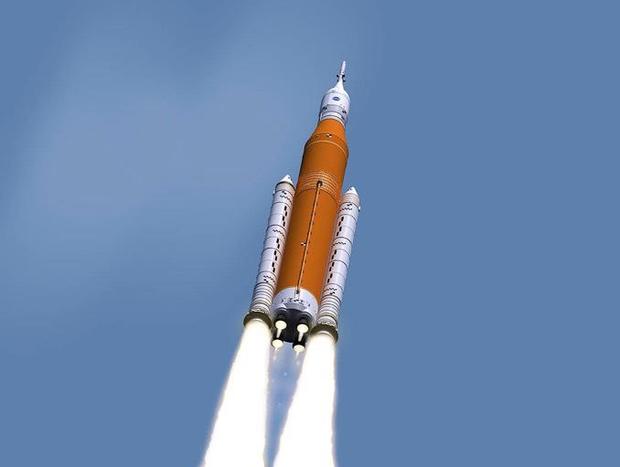 NASA currently is working to a Trump administration schedule that calls for the first piloted SLS-Orion flight — Artemis 2 — in 2023, followed by a moon landing using the third SLS rocket by the end of 2024.

But that schedule assumes funding to develop a new moon lander. The program has not yet received the necessary budget from Congress, and it’s not yet known what level of support the Biden administration will provide.

For its part, the SLS team is optimistic the first Artemis rocket will be ready for launch before the end of the year.

“This powerful rocket is is going to put us in a position to be ready to support the agency and the country’s deep space mission to the moon and beyond,” said John Honeycutt, NASA SLS program manager at Marshall.

But it has been a rocky road.

The development program is well over budget and at least two years behind schedule. NASA’s inspector general reported last March that total SLS program costs were expected to climb above $18 billion by the time the Artemis 1 rocket finally takes off.

The delays and high costs have prompted debate about the need for the SLS to ferry astronauts to the moon given the availability of less powerful but much less expensive SpaceX Falcon Heavy rockets and other heavy-lift boosters now in development. But NASA managers say the SLS is the only rocket available in the near term that is capable of accommodating the Orion crew capsule and other large components envisioned for the Artemis program.

Boeing Space Launch System, No
You may also like: