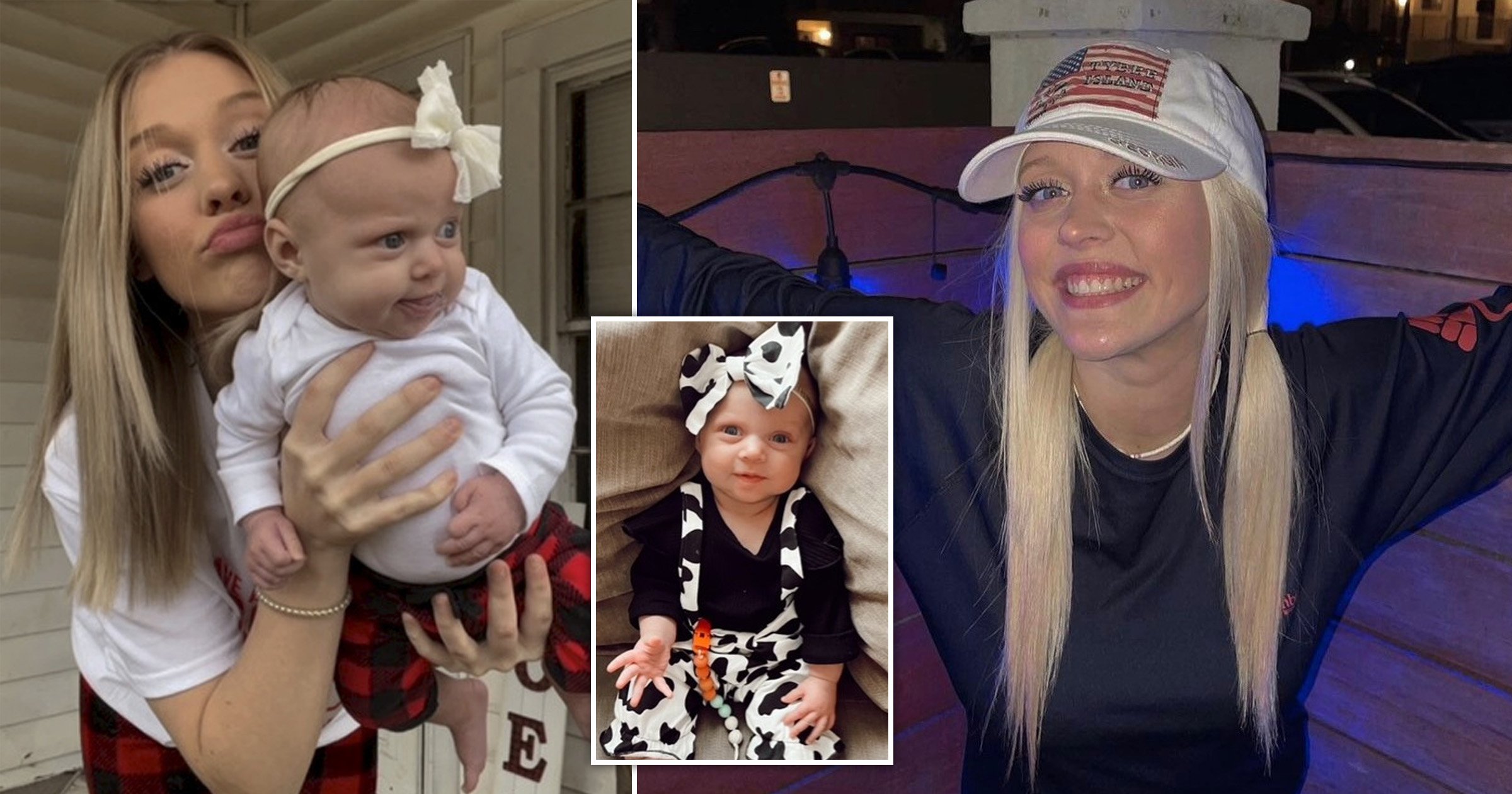 A mum has revealed how she found out she was pregnant right at the last minute – when she was five centimetres dilated and in labour.

Bri Blanton, 18, said she had no bump, sickness or cravings during pregnancy. She was rushed to hospital by her mum, Jennifer Blackwell, 36, when she woke up doubled over in pain.

Bri thought she had wet herself, but upon arrival at the hospital was told her waters had broken and she was pregnant and in labour.

Just two hours later, she had to quickly adjust to becoming a mum to her little girl, Oakleigh.

Despite the surprise, Bri is enjoying motherhood and is four months in.

Bri, a nanny, from the upstate of South Carolina, US, said: ‘When they told me I was pregnant and giving birth I was in complete shock.

‘I kept saying to my mum: “This isn’t possible.”

‘They put her on me after she was born, and my mum said I looked like a deer in the headlights looking at her.

‘It took me a good four hours after she was born to calm down.

‘I told my friends I’d had a baby and they were like “But you weren’t pregnant last week.”‘

Her mum, Jennifer, was also in a state of shock, saying it was as though she went to bed and woke up pregnant.

Bri said she’d even done a pregnancy test that was negative last summer after vomiting after a meal, and she’d shown no signs of the classic symptoms.

‘We had no idea, but Oakleigh is a blessing. Watching Bri be a mum is really beautiful,’ Jennifer added.

Bri had carried on her active lifestyle while pregnant – riding, fishing and hunting – unaware she was expecting.

‘We bought her prom dress four months before and it fit like a glove,’ Jennifer said.

‘It still fit perfectly on the day of her prom, but she would have been five months pregnant.’

It was only when a nurse asked to check her cervix they learned the truth – and even the medical experts were in shock.

‘The nurse asked if she could check Bri’s cervix,’ Jennifer said.

‘Then the nurse looked at me really eyes wide and said: “She’s dilated and in labour.”

‘I was worried for her because she was about to have a baby that she wasn’t prepared for.’

However, Bri’s maternal instincts kicked in from Oakleigh’s birth on September 8.

‘For me it was a full circle moment as I had Bri when I was 17,’ Jennifer said.

‘It was lovely to see how people showed up for Bri and didn’t shun her.’

Now Oakleigh is four months old, and Jennifer is proud of the mum Bri has become.

‘She’s hands down the best mum,’ she said. ‘Oakleigh has got us all wrapped around her little finger.’