Follow
Home » Lifestyle » ‘I feel dirty for a lot of this show’: Jamie Dornan on heading outback for The Tourist

‘I feel dirty for a lot of this show’: Jamie Dornan on heading outback for The Tourist

Jamie Dornan is sitting alone in his trailer. He has a shaggy beard, looks pretty grimy and isn’t quite sure where he is. “I don’t know where we are today. We’re north of where Henley Beach is, near Port Adelaide,” he decides, despite having been in South Australia for about five months filming The Tourist.

I’m supposed to be in Adelaide on a set visit, but it’s late June and the state borders have just closed, so it’s a Zoom call instead and a view of Dornan’s fairly bleak-looking trailer. 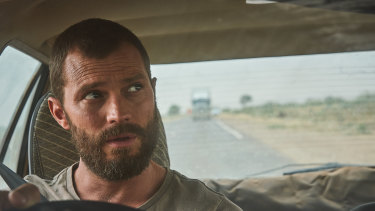 Jamie Dornan plays The Man, who wakes up with no memory after being chased down by a truck in The Tourist.

Does he ask for a rider, like musicians do? A bowl of all-blue M&Ms, anything like that?

What? Surely it’s a box of kittens, at the very least.

“I don’t like fuss being made,” he says. “I’m not good at subservience. I don’t like it. I’m probably in the wrong trade because people treat actors like they need everything, and I’m definitely not one of those people.” 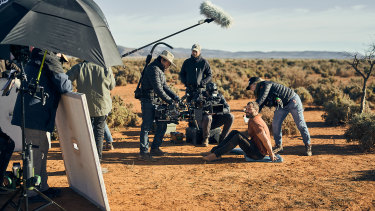 Dornan and crew filming a scene for The Tourist in the South Australian outback.

And while he may not be “one of those people”, the Northern Irish actor is one of those people – the kind of celebrity whose name you know even if you haven’t seen him act. He’s been a tabloid favourite since his modelling days in the early 2000s, when he was called “the golden torso” by The New York Times, and a quick google will give you a mountain of shots of Dornan in his Calvin Kleins. He gave acting a crack in 2006 (a small role in Sofia Coppola’s Marie Antoinette), which eventually led to the 2011 US fairytale TV series Once Upon a Time. Then came the critically acclaimed The Fall, in which he played serial killer Paul Spector, who terrorised Belfast and everyone who watched it.

“I’ve had a lot of women, particularly, who have said they shouldn’t have watched it alone, late at night, you know, I’ve had a lot of that,” he says. “But again, hopefully, they realise that I’m pretty far away from being that f—ing evil man.”

Fast-forward 10 years and Dornan, 39, is now the kind of big name that you cast in a six-part outback thriller populated with Australian character actors if you want to sell it overseas. It also helps that he’s entering a purple patch in his career: he’s been nominated for a Critic’s Choice award for best supporting actor for his role in Kenneth Branagh’s upcoming semi-autobiographical film Belfast.

In The Tourist, Dornan plays The Man, who is chased off the road by a truck in the South Australian outback. When he wakes up in hospital, he has no memory of who he is, save for a note in his pocket directing him to a meeting the next day at Gloria’s Diner. 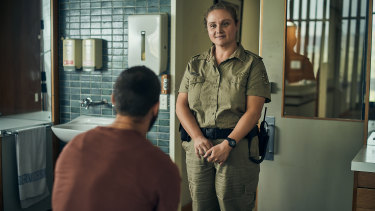 Danielle Macdonald plays a young policewoman who helps The Man (Jamie Dornan) recover his memory in The Tourist.

With the aid of a young policewoman, Helen (played by Danielle Macdonald), and a waitress, Luci (Shalom Brune-Franklin), The Man attempts to piece his past together, starting with his name. He’s not the only one trying to find himself, though: he’s being pursued by a mysterious cowboy hat-wearing man (Olafur Darri Olafsson) and a detective (Damon Herriman).

Dornan spends most of the first few episodes squinting into the sun, covered in dust and wearing a dead man’s clothes. “That’s the red dust of the outback taking its toll,” he says of his near-permanent squint. “Legit, we were dealing with real dust storms while we were shooting there [in the outback] in March or April. It’s a filthy environment to work in, but in a great way it looks amazing. I feel dirty for a lot of this show.”

Dornan says the show was pitched to him as “Killing Eve meets Memento” and he’s not far off. The Tourist has the central “Who am I?” mystery of Memento and the dry humour of Killing Eve. Tension is cut through with Dornan’s car karaoke rendition of Bette Davis Eyes, while a stand-off over signing for a toilet key at an isolated petrol station is tense, funny and relatable to anyone who has had to lug an oversized lump of wood to the toilets and back again.

“It’s a fine line,” Dornan says of The Tourist’s humour. “Which, I think, life is like that. Going through really tragic and insane things and then, at the same time, laughing about it.” 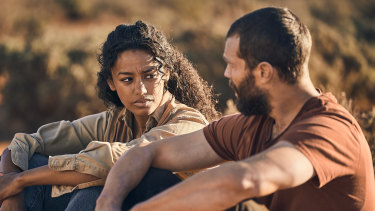 Luci (Shalom Brune-Franklin) and The Man (Jamie Dornan) in The Tourist.

The team behind The Tourist have form in this lane: screenwriters Harry and Jack Williams are part of the production team behind the critically acclaimed comedy Fleabag, as well as having written BBC dramas The Missing and its follow-up Baptiste.

Still, Adelaide is a long way to come for a show that spends its opening sequence flinging him around a dusty road in a rickety Mazda 323. Why did Dornan say yes?

“The scripts are insanely original,” he says. “That’s, as an actor, something I’m always looking for. I’m trying to mix it up. I just don’t want to do the same thing twice. I don’t understand the point of being an actor and playing the same kind of character or just doing action movies. You know, maybe if you’re getting paid $25 million a picture to do action movies you might find peace with it, but I don’t want to do that. I want to do roles that challenge me and genres that challenge me.”

Dornan brought his family with him to Adelaide: wife Amelia Warner and their three daughters. “I’m just not someone who’s willing to go away for four months, or five months, six months without my family,” he says. “I don’t want to be that person.”

He describes Adelaide as one of the easiest places they have ever lived, despite the over-enthusiastic wildlife recommendations. “The first thing that anyone says to them when they meet them is, ‘Have you seen a koala yet? A kangaroo?’ It’s sort of the equivalent of being in Ireland and someone saying, ‘Have you had a taste of Guinness yet?’”

“Roles are almost always defined as good guys and bad guys,” he says. “It’s almost as black and white as that sometimes. So there’s no way that you can fully turn your back and go, ‘I played this really dark character, I’m never gonna do it again.’ So, it’s like I appreciate and I’m thankful that I have been able to play someone like [Paul Spector] in The Fall, where I almost didn’t realise myself that I could go to those levels of darkness … but actually what that did for me, it made me go, ‘That’s great that I could do that, let’s see what else I can take away,’ and challenge myself.”

In that respect, The Tourist has scratched an itch. “There’s darkness to this character that I’m playing [in The Tourist], but there’s also a lightness and funny side to him, too. So this particular job is managing to scratch lots of itches. Do you want to play bad guys your whole career? F— no. But also, would you want to play guys who always do the right thing? No, that’s just not interesting.”

The Tourist has also given Dornan the opportunity to sport his favourite type of facial hair: a full, thick beard. Without one, he has said, his face resembles a thumb.

“I have to be malleable and, you know, bend every way as an actor and if something means I don’t have a beard, I have to be OK with that. But it’s my preference,” he says, laughing. “But ever since I’ve been in Australia, the last three or four months, it’s gone so f—ing grey. I’m not loving my beard maybe as much. I wouldn’t give a f— if it was all, like, the same, but it’s sort of mostly gray on one side, lopsided. I’m ageing on one side of my face.”

And, like his character in The Tourist, is there anything Dornan would like to forget? If he could lose his memory like The Man, would he choose to wipe anything from his life all together?

“I think no, not really,” he says. “I haven’t had a lot of big regrets in my life or anything. I have played it pretty straight for the most part. I don’t fall out with people or get into a lot of arguments, I just don’t have time for that. I think life’s too short for that shit. I’ve had the same group of friends since I was a kid and I feel like things have gone along in a nice way for me.

“I’m a pretty good drinker. I never get f—ed and say the wrong thing and get kicked out or start fights, that hasn’t been my thing either. So I don’t think it’s anything. There are things in my life I wish hadn’t happened and people I’ve lost and lots of other f—ing bad shit. But I think this sort of tapestry of shit that’s happened to me is what makes you who you are today. You know, I’m happy with who I am today, I think so. I don’t want to forget anything.”

The Tourist is streaming on Stan, which is owned by the publisher of this masthead, from January 2.