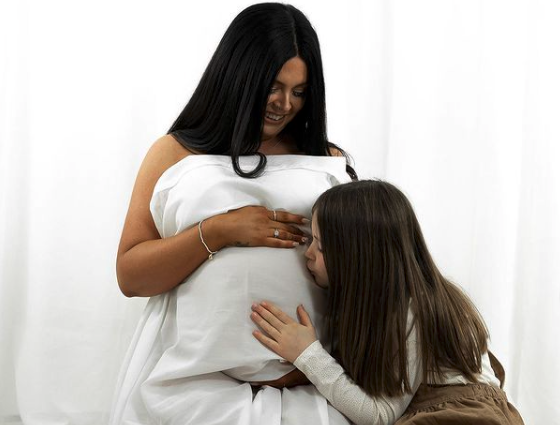 As the pregnancy test showed a positive result, I was so excited… but not for myself.

Right from the beginning, this pregnancy felt so different from the first time.

For one, now I was a surrogate for a couple that desperately wanted a baby. And instead of feeling embarrassment and discomfort, as was common during my first pregnancy, this time I was determined to embrace it and enjoy every second.

When I was 21, I accidentally fell pregnant after a casual fling. I felt lonely, ashamed and frightened.

After being forced to abandon my NVQ training in childcare and move back home with my parents, I hid away, masking my growing bump under baggy clothes. I thought nobody would ever want me again.

I felt no connection with the baby inside me ­– in fact, I just felt numb.

It wasn’t until I booked a 4D scan at 32-weeks and finally saw my little girl’s face for the first time that something clicked. For the first time, my pregnancy felt real and I knew this baby deserved love.

As I sat in the car after the scan, tears streamed down my cheeks as I stared at the pictures.

‘It’s just going to be you and me,’ I whispered.

And from the moment my daughter Lacey was laid in my arms on 1 June 2012, that’s exactly what it was. Just Lacey and I.

She opened her eyes almost immediately and as she looked into mine, I knew I wanted to give her the world.

Single motherhood wasn’t easy but Lacey gave everything in my life renewed purpose, fuelled by the need to protect her.

Eventually, we got our own flat and I got a job as a medical lab assistant working in pathology.

It felt like Lacey had been sent to me as my guardian angel. Some of my life’s proudest moments feature her – including watching her play Mary in the school nativity and getting a distinction in drama class.

I was scrolling Facebook in December 2018 when a random advert appealing for egg donors flashed up. Curiosity got the better of me and I clicked the advert.

At the time, it actually didn’t feel like a big deal; I just thought I’d put in an enquiry and see what happened. I didn’t realise at the time what a turning point it would be.

Hours later, I was still reading articles on egg donation. It blew my mind that there were women out there who desperately wanted to have a baby but couldn’t when my pregnancy with Lacey was unwanted at first.

Then I thought about how blessed I was to have my daughter. Because of Lacey, my heart is full. I’ve always had so much love to give and Lacey has given my life purpose.

Through egg donation, I thought I might be able to help someone else feel that way too.

Of course, the first person I spoke to about it was Lacey, who was seven at the time.

‘Having a baby is like baking a cake,’ I told her. ‘You need an oven and you need all the ingredients, but sometimes one of the ingredients is missing.’

‘So some mummies can’t bake babies?’ she asked. ‘Can we help them?’

‘How would you feel if Mummy was able to give some of her ingredients to another lady?’ I proposed.

Lacey took a thoughtful pause before nodding. ‘I think that would be OK,’ she said.

I explained to her that to help others, I would have to have injections – hormones before egg extraction – but Lacey said that if I felt poorly she would do the washing up and make her bed to help me.

Over the next couple of months, I researched egg donation more intensely and had repeated conversations with my daughter to make sure she understood what it meant.

In April 2019, I made my first donation with Wessex Fertility.

I donated 30 eggs during a simple process under sedation called retrieval, which took about half an hour. It wasn’t painful and afterwards, the nurse gave me an anti-sickness injection and a biscuit. I was amazed at how simple it was.

Sitting in the waiting room a little later, I got talking to a lady who was there for fertility treatment.

As she told me how hard she’d struggled to have a baby, and I thought about how easy it had been for me to donate my eggs, I knew I’d done the right thing.

Over the next 12 months, I made three more donations and I helped to make two babies – a boy and a girl. I cried my eyes out when the clinic gave me that news; it’s amazing to think I helped get their happy endings.

I wanted to do more to help couples who were struggling to conceive. The lady from the waiting room was still on my mind, so I started looking into surrogacy and found an organisation called Brilliant Beginnings, which matches surrogates with people who want to be parents.

After a detailed assessment process, involving a health check, blood tests, psychological assessment, and screening to check for genetic conditions, I was matched with a same-sex couple.

We arranged a meeting over a drink at a restaurant to talk things over. I felt comfortable around them and warmed to them immediately.

I’d explained to Lacey, still aged seven, that I was thinking of letting my tummy grow another couple’s baby, like being an oven for someone else’s cake. She’d even made two vanilla buns for them, covered in messy icing.

By the end of our conversation, I felt relaxed enough to hand them over and the couple loved their treats. For me, that sealed the deal.

But again, I needed the green light from the most important person in my life. I arranged for the couple to meet Lacey.

As we all walked around Bournemouth Gardens they got on like a house on fire.

When we got back into our car, Lacey smiled: ‘Mum, I really like them. I think they’re going to be great dads. We should do it.’

In autumn 2020, I underwent the transfer: a donor egg, fertilized by one of the dads, was placed in my uterus. Ten days later, I had a positive pregnancy test.

All the way through the pregnancy, I video called or messaged the dads constantly, telling them when I was craving a Chinese or the baby was hiccupping. Lacey and I even did a pregnancy photoshoot to record our special time with my bump!

On the morning I went into labour, Lacey knew just what to do because we’d discussed it beforehand: calmly calling the dads and a couple of my friends who had agreed to help, telling them my waters had broken.

Then she went off to school and I went to Poole Hospital to make my precious delivery.

The baby boy was born in summer 2021 and as soon as he arrived he was passed to his dads for skin-to-skin contact. I grabbed my phone and started making a video for them of their first moments.

It may sound cliché but there wasn’t a dry eye in the house. The dads were so emotional, as was I, and it felt like at that moment nothing else in the world mattered.

I can honestly say that it was the most special time of my life, after giving birth to Lacey.

The dads stayed in the room with me and I felt so privileged to witness their first moments with their son. When it was my turn for a cuddle it was wonderful but he absolutely didn’t feel like my baby. I’d witnessed them becoming parents and the baby going straight to them. He was never mine.

We all went home later that day and the first thing I did was pull Lacey into my arms.

‘There’s someone special for you to meet,’ I told her.

Then the couple walked in behind me cradling their newborn. Lacey sat on the sofa before one of the dads sat beside her, gently easing the baby into her arms. She cried happy tears and said he was very cute.

I’ll never forget what he told her. He said: ‘Look what you and your mummy did for us, Lacey. You made this baby for us. Thank you so much.’

We’ve kept in touch ever since and the dads send us regular updates of how their baby is doing.

People often ask me why I wanted to be a surrogate. After all, in the UK it’s illegal to accept payment for doing it, bar expenses.

But it was the most nurturing and fulfilling experience I’ve ever had; I felt completely surrounded by love.

I benefitted hugely and came away with something I really didn’t expect, which was the chance to heal my feelings surrounding my pregnancy with Lacey.

I’m incredibly proud of my daughter for supporting my decision to help another couple have a baby and can only hope it brings them as much joy as Lacey has brought me.

As for doing it again, I would definitely consider it. I have helped to bring three amazing children into the world through egg donation and surrogacy and the feeling is hard to describe.

The door is definitely open – that is, if Lacey agrees, of course.

As told to Jade Beecroft