It is in a sparring session that you come to understand why it is called a martial ‘art’.

In Taekwon-Do, your gaze must remain fixed on your opponent’s face, which will indicate his or her plan of attack. The temptation to watch for signals from hands or feet can bring unexpected and painful consequences.

At the same time, you need to instantly decide your defence and counterattack. These thoughts raced through my mind when sparring with my instructor Alex Nardizzi, a 6th Dan (the Korean name for ‘level’) former British and European champion.

Unfortunately, his thoughts were well ahead of mine, so no prizes for guessing who won. That said, it was not your usual day for a pensioner.

Last September, a few weeks short of my 80th birthday, it was agreed that I had ‘the potential’ to grade for my Black Belt in Taekwon-Do.

It was the moment I had been anticipating for more than 20 years, on and off, as a student of the martial art. My objectives in becoming a Taekwon-Do practitioner were twofold: to boost my self-confidence and prove that age is indeed but a number.

My GP wasn’t convinced though, after I asked for her guidance. ‘Hmm,’ she frowned. ‘You can probably expect to sustain injuries if you tangle with any 20-year-olds. Needless to say, you may also be risking a heart attack.’

A friend whose judgement I trusted asked me over tea and steepled fingers if I was prepared to put myself in danger of serious bodily damage in, what he kindly referred to as, my ‘declining years’.

I even sought counsel from a veteran martial arts practitioner – to no avail. ‘I think this isn’t a good idea – you know, because of your age,’ he said, stroking his venerable white beard. ‘You may be wasting your money.’ 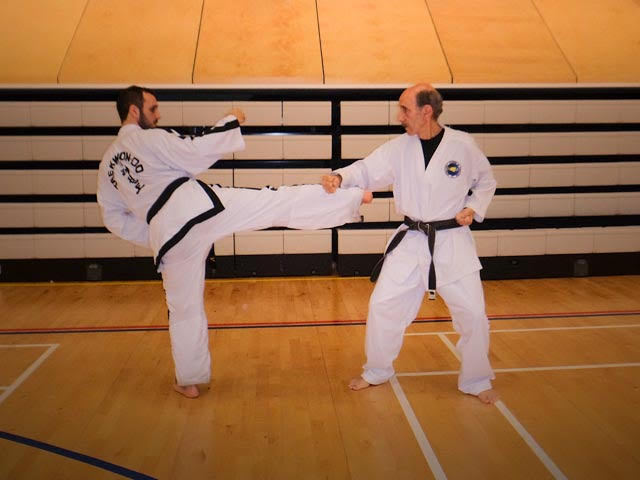 Everyone else seemed more concerned with my age than I was – but I was determined to prove them wrong. If anything, I felt as fit at nearly 80 than I did in my younger years.

Contrary to everyone else’s opinion, one drizzly Saturday morning found me sharing a dojang in East Croydon with a roomful of outrageously fit twenty-somethings. This is it, I told myself: it’s now or never. I was about to grade for my Black Belt in Taekwon-Do.

Seated behind a table at the front of the room was Alex’s dad, 9th Dan Grand Master Donato Nardizzi, one of an elite of Taekwon-Do instructors worldwide to bear that title.

On a signal, we were called up to perform a sequence of kicks – turning, forward, side, hooking, reverse – up and down the sports hall. And again. Then came the patterns, nine in all for a Black Belt aspirant, each ranging from 19 to 38 movements.

Board breaking was next on the agenda. This entails smashing a half-inch thick plastic board with a side kick, and a second one with a punch or a strike with the side of the hand. I chose the latter, reasoning that a fractured wrist would be less troublesome than a set of shattered knuckles.

The splintering sound that followed my two attacks was most gratifying, coming as it did from the demolished boards and not my anatomy.

Then, it was time for free sparring, first one-on-one and then fighting two opponents simultaneously. To top it off, we engaged in release techniques for neck chokes, headlocks and the like.

The final item on the agenda was the dreaded theory test. Hands up everyone who knows what sonkal nopunde ap taerigi means (knife-hand high front strike, of course.)

I was summoned to the table and asked: ‘Who is the pattern Choong Moo named after?’ Oh glory, that was one I did know. ‘Admiral Yi Sun Soon-Sin!’ I cried out. ‘He was credited with designing the kobukson, the first armoured battleship. He was killed in a naval battle with the Japanese in 1598 by a stray arquebus bullet to his left side, which is why we end this pattern with a left-hand strike, to symbolise his untimely death.’ Phew.

Was that the only question? Sadly not.

‘What is the Korean for elbow, fist, walking stance, reverse knife-hand front strike…’ And so on, for another gruelling 10 minutes before I was dismissed. I bowed, took three steps back, bowed again and slumped onto the bench.

After this three-hour-plus ordeal, I limped home to soak in a hot bath spiked with lavender oil, followed by a rubdown with extra strength Tiger Balm. I took an ice pack out of the fridge, pulled on my knee braces and collapsed on the sofa, trussed up like a Christmas turkey.

In Spain, where I lived for 20 years, it was commonly said that the day of your First Communion marks the happiest of your life. For me, it was the Monday morning after my grading, when I opened an email from Grand Master Nardizzi congratulating me for passing.

My age has never been questioned by fellow students. On the contrary, I have been treated with the reverence inherent in the martial art’s first tenet: courtesy.

Through Taekwon-Do I have discovered new potential, mental as well as physical. I would recommend it to any fit pensioner.

Putting your feet up is good for circulation – delivering a turning kick is even better.

Age is Just a Number

Welcome to Age is Just a Number, a Metro.co.uk series aiming to show that, when it comes to living your life, achieving your dreams, and being who you want to be, the date on your birth certificate means nothing.

Each week, prepare to meet amazing people doing stereotype-defying things, at all stages of life.

If you have a story to share, email [email protected]