Follow
Home » Lifestyle » If the idea of a delicious summer crop of onions appeals, get sowing

If the idea of a delicious summer crop of onions appeals, get sowing

Know your onions: If the idea of a delicious summer crop of onions (or shallots) appeals, then get sowing now, says Monty Don – just be sure to keep weeds at bay

Monty revisits one of his classic books, Gardening at Longmeadow, in an occasional series.

To give onions the longest possible growing season I sow a batch of them in January. This means they’ll need the protection of a greenhouse or coldframe for another few months, and then a period of hardening off before they can be planted out.

But I take huge encouragement from the fact that I’m creating new life in the depths of winter – with the promise of a summer harvest.

There are two ways of growing onions, either from sets or seed. Sets – which are just small onions – take about 20 weeks to mature from planting. Seed takes perhaps another four weeks on top of that. 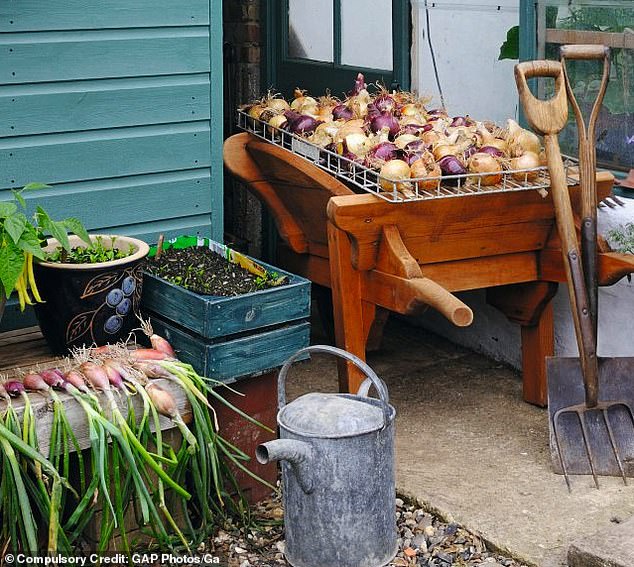 There are more varieties of onion available from seed but sets are easy to grow and so I always grow some of these (as well as seed).

Buy a bag of small bulbs (any variety that appeals), prepare the soil so that it is fine and soft enough to stick a finger in as far as the knuckle without any soil sticking to it, and then bury the sets so that the tops are sticking out of the ground.

I use a scaffolding board as both a straight edge for the rows and for me to kneel on to avoid compacting the soil. It’s a good idea to make sure the sets are carefully sown in a grid as then you can hoe in both directions without clipping a bulb in passing.

Hoeing (and occasionally handweeding) onions is important because they respond badly to competition from weeds for water and nutrients.

HOW TO GROW CHILLIES

Onions do best in good but lightish soil. If the ground has too much manure or compost you’ll have lots of lush leaves but the onions will be a bit on the small side and more prone to fungal problems.

Shallots are, in my opinion, just as important a vegetable as onions. They are easier to grow, tolerate poorer soil and less water and store much better than onions.

But the real difference between them is that each individual shallot set or seed will multiply and produce a clump of around half a dozen small bulbs.

These are harvested in exactly the same way as onions and, when dry, I store ours in a wire basket in the potting shed. If they are kept cool and dark, then they should store well, right into the spring.

It’s essential that onions and shallots are as dry as possible before they are stored. And the more sun they have before harvesting, the better they’ll last. It is important not to cut off any of the leaves but to let them die back completely and dry out before removing the residue for storage.

Onions should be lifted carefully with a fork rather than yanked from the soil to avoid damaging the ‘collar’ of root above the bulb and reduce the risk of rot entering the bulb when stored.

I always harvest on the morning of a hot, dry day and leave them to dry on the ground for the rest of the day. I then put them in the greenhouse or on a wooden rack for a few weeks.

When bone dry, I either plait them and hang them up or store them in baskets.

I principally grow flat-leaved parsley, which I think has a better flavour and texture, although the curly-leaved kind is good and decorative too. But the flat-leaved type is particularly tasty when used liberally with vegetables, stews, soups, as part of salads and, with walnuts, as a delicious pesto for pasta or potatoes.

Parsley is not difficult to grow and therefore needs no extra skills. It also grows reasonably fast so demands no special allocation of time. What it does deserve is plenty of space.

I make two or three sowings a year, the first now, then in May and finally in August. This ensures a limitless supply through the seasons.

Parsley is not a Mediterranean herb and so thrives in well-drained but fertile soil, with plenty of moisture. It will also tolerate some shade.

Grow some yourself from seed and each tiny seedling will last from six to nine months and give a harvest more bountiful than the biggest pot that mass production will supply. Grow lots of seedlings and you are guaranteed happiness, health and a substantial financial saving.