Follow
Home » Lifestyle » I’ll get out of your lives, promises Morrison. Just re-elect me first

I’ll get out of your lives, promises Morrison. Just re-elect me first

Scott Morrison can read a room.

It helps, of course, if the room is an auditorium in humid Brisbane, full of colleagues (loyal, for now), family and party faithful who don’t just want you to win the election in a week’s time, but really need you to. 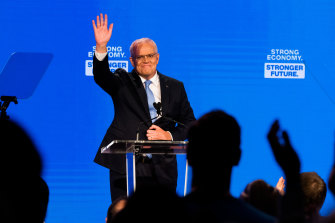 Scott Morrison read the room like a palm on Sunday.Credit:James Brickwood

The room in question was Sunday’s Coalition campaign launch and Morrison read it like a palm, just as he has read the mood of an electorate turned off by his personal style: he promised to get himself out of our lives.

He just needs to get re-elected first.

And so to the launch, coming in hot and late, with less than a week to go until election day.

The knot of union protestors outside shouting “Liar! Liar!” at great pitch (Barnaby Joyce dubbed them “raving banshees”) were soon drowned out by the hubbub of Liberal socialising.

Chicken and leek pies were nibbled.

It was Queensland, so a couple of blokes wore shorts. 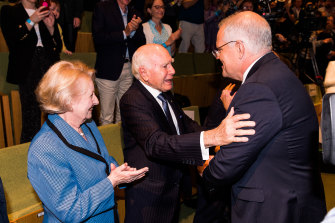 Malcolm Turnbull is abroad, but no one mentioned him.

Joyce and Josh Frydenberg warmed up for Morrison, with the latter receiving a standing ovation that pleased him greatly.

The Treasurer had the crowd eating from his hand with an opening, self-deprecating crack which nodded to the depths of his party’s electoral woes: “Wish I got that reception in Kooyong!”

Then came an energised Morrison, whose manner verged on warm, not to mention loquacious – he spoke for nearly an hour, quite a long time for someone who believes in minimal government.

Queensland had gotten to him – the prime minister even flirted with folksy charm, at times dropping his consonants.

“I’m seekin’ a second term ’cause I’m just warmin’ up!” he cried, to cheers from the crowd.

Having recently admitted he is a “bulldozer” whose style many voters find unappealing, Morrison spoke of his desire to leave people alone.

“[Australians] are tired of politics, it’s been an exhausting time,” he told the room.

“They’ve certainly had enough of governments telling them how to live their lives, and I agree.”

But before he can recede from the national consciousness, Morrison needs voters to buy his pitch.

Its newly announced centrepiece was a scheme allowing first home buyers to dip into their superannuation, something the dry young libertarians of the Liberal backbench have been advocating for years.

Morrison has spent the last week warning of the inflationary effect of a cost-of-living wage rise for the nation’s poorest workers.

The inflationary effect on house prices of this policy?

Sunday was not the day for such nay-saying – Morrison was here to build; let others bulldoze.

As a political move, the policy was a masterstroke.

This is solid territory for the party that places the individual above the state.

As Joyce noted in his warm-up speech, the Coalition wants “to make you the master of the ship, make you the boss of your own life”.

Morrison cannot even be accused of throwing around public money – the policy allows individuals to throw around their own money.

“Labor always wants to put the government at the centre of everything,” Morrison said.

“We want Australians to own their own homes … you don’t have to check with the government every time you go to Bunnings to buy a can of paint.”

Morrison went hard on his pitch for the future.

“Better days are ahead,” he assured us.

But before he could get onto that, it was necessary to remind us of the past.

“Our nation was gripped by fear and uncertainty,” he said of the early days of the pandemic.

“We stood on the edge of an abyss and as we stared into it, Josh and I were assured of one fundamental truth: if we backed Australians, Australians would deliver.”

Morrison needs them to deliver again, for him, and once re-elected, he has promised he will change his style to a more consultative one.

“We have worked so hard,” he said.

“Our plan will take us to where we’ve been working hard to get to.”

Just where that is, exactly, Morrison (and voters) will find out in a week.

The Coalition government may not be given a chance to get out of Australians’ lives.

Australians may well take the decision into their own hands.