By now, you’ve likely heard what happened to me. I ate a bag of frozen vegetables and got poisoned (like, two-ER-visits-in-the-span-of-seven-days poisoned), then I went viral for getting poisoned (to the tune of interviews with the New York Times, CNN, The Cut, while emails from more than a dozen journalists at outlets including Good Morning America, Rolling Stone, and Bon Appétit wait in my inbox), and 10 weeks later, the doctors still don’t understand what happened to me or why my liver levels got so damn high.

But let me back up a bit. I’ve posted videos on TikTok a lot, but this time, in mid-June, it was different. I paused for a second—would this ruin my industry relationships? Could it affect my career or my public image?—before hitting the big red “post” button. The stakes were too high. I was sitting on information that could potentially save people’s lives. I mean, it’s not everyday you find yourself at the center of a national foodborne-illness outbreak.

This series of wild and unfortunate events began in early May when I received a PR package from Daily Harvest. As a vegetarian for 12 years, I was genuinely excited to try it. I had seen so many friends and influencers give the brand rave reviews—and it doesn’t hurt that Gwyneth Paltrow, our patron saint of bougie/buzzy/sometimes bananas health stuff, is just one of the many high-profile investors in the DTC brand.

So I cooked—okay, fine—burned a big pan of Daily Harvest’s French lentil and leek crumbles on a pleasant May evening after work. My husband took one look at the blackened bowl and ran for cover while I proudly ate my packaged frozen meal on the couch while devouring the season premiere of The Real Housewives of Beverly Hills. To be honest, the crumbles tasted really good. An explosion of savory, salty, nutty flavors in every bite.

The next day, I woke up with stomach cramps, but because I have an extremely high pain tolerance (brag), I tried to power through my day as normal. By early evening, the pain had intensified, so much so that every few minutes, I found myself curled up on the floor. It felt like someone was stabbing me through my rib cage into my stomach with a sharp knife. But who wants to go to the emergency room in NYC (not me!), so I tried to sleep it off. In the middle of the night, I couldn’t take it anymore, so my husband and I headed to the ER. 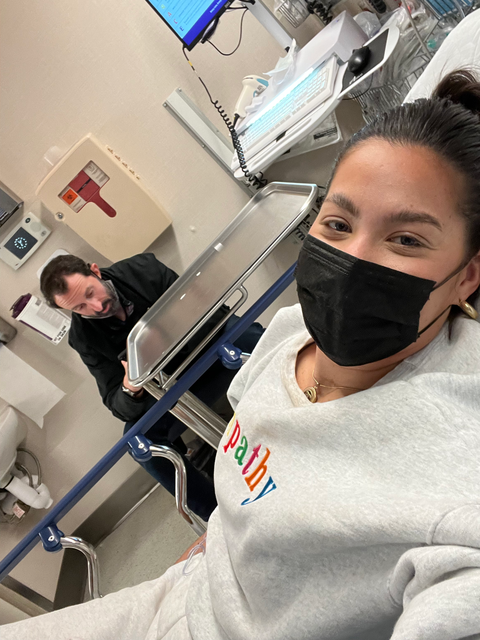 Countless hours and blood tests later, my doctors were puzzled. All the tests were coming back negative, even though my liver levels remained quite elevated. Because they found bacteria in my urine, they chalked it up to a good ol’ UTI and sent me home with 5 days of antibiotics. Phew, an answer.

Over the next week, I was very tired, but I assumed it was the effects of the UTI and feeling burned out in general (thanks, 2022)—unfortunately, I was wrong. The pain came back with vengeance after I was through with the antibiotics. I could barely walk a few steps without having to stop and crumble (heh?) to the ground. I had a high fever, felt super nauseated, and still had crazy stomach pain. It felt like my rib cage had swollen and was rubbing against my skin. Back to the ER I went.

I started to think that maybe I had cancer. I was in pain, terrified.

Hospital visit number two was packed with all sorts of fun—a CAT scan, an ultrasound, a transvaginal ultrasound, the works. My liver levels were still through the roof, but the tests weren’t revealing anything—no hepatitis, no mono, no gallstones. I started to think that maybe I had cancer. Maybe it had spread and it was all over and they’re just missing something. I was in pain, terrified.

Soon after my fever broke, I was sent home with orders to follow up with my primary care doctor and a liver specialist. Sigh, this time, no answers.

I spent the next four weeks shuffling from doctor appointment to doctor appointment, eating clean, skipping work events, going to sleep early, not touching alcohol. With each new pang of pain in my stomach, I felt increasingly anxious that my doctors had to be missing something. 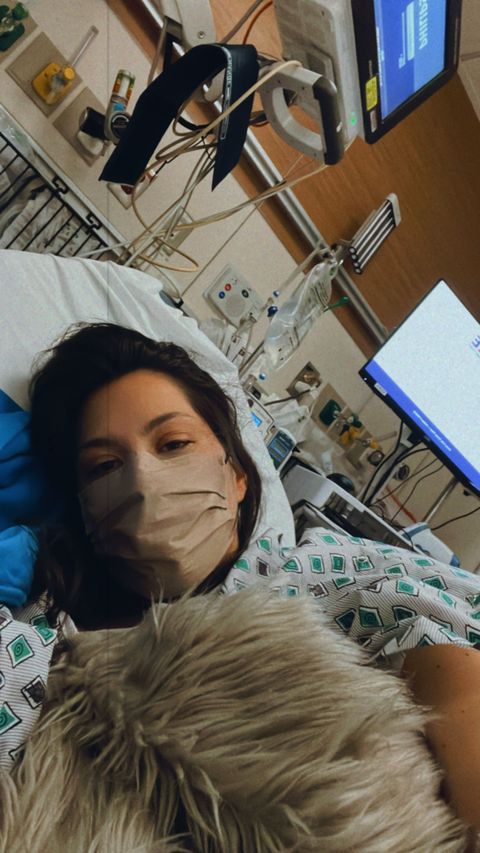 Cut to: Saturday night in mid-June, my husband and I are getting ready to grab a casual dinner outside, when—BAM—the email from the Daily Harvest PR team lands in my inbox. Apparently, a small number of Daily Harvest customers had reported “gastrointestinal discomfort and other symptoms” after eating the French lentil and leek crumbles and “out of an abundance of caution,” I should dispose of the bag immediately.

Okay, I know this sounds pretty incredible, but I had actually fished the Daily Harvest food packaging out of my trash and taken a picture to show my doctors what I had eaten the night before ER visit number one. Call it a spidey sense or just being a paranoid millennial, but I had an inkling there might be a connection. So I clicked over from the email to my camera roll to confirm that—yep—the crumbles in question were the same ones I had eaten that night with Lisa Rinna.

Next, I tapped over to my most dependable friend and confidant—Google. It didn’t take long to find a Reddit thread where people were detailing their nightmare experiences with Daily Harvest crumbles—multiple ER visits, extreme stomach pain, elevated liver levels. Guess it wasn’t a “mystery illness” after all.

Then I checked the Daily Harvest social media accounts, but I couldn’t find any mention of #crumblegate. You’d think a company that built its customer base on Instagram might use the platform to, uh, issue a quick PSA, but no—so I had to take matters into my own hands.

It was time to go viral on TikTok.

And on June 22, Daily Harvest finally acknowledged the voluntary recall on their Instagram grid. The one silver lining of this whole mess is that I know my story helped others connect the dots about their own mysterious health crisis, and it even alerted some people who had missed the initial recall email from Daily Harvest and still had bags of French lentils and leek crumbles in their freezer. 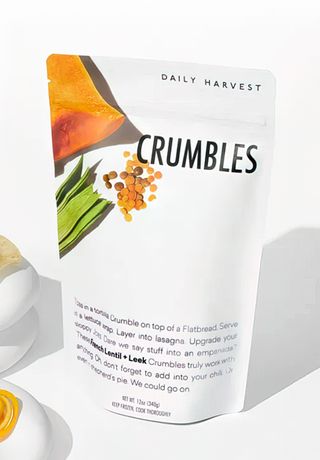 I’m not going to lie: Being a whistleblower has been overwhelming. I didn’t expect to go viral, but I’m glad I did. I was a healthy 32-year-old woman before this traumatizing ordeal. Now, I’m a walking ball of anxiety. I have no idea if this health scare will have long-lasting effects, and I’m one of the lucky ones. Some people experienced jaundice; countless others have had their gallbladders removed. Hundreds who were made sick by this food are still waiting for answers while the FDA conducts testing. Daily Harvest, for their part, has ruled out several potential root causes, including hepatitis A, norovirus, and pesticides.

And in an interesting turn of events, there’s now a Reddit thread gaining steam about another recall from Revive Superfoods. Eerily enough, after drinking a Revive Superfood smoothie, people are experiencing symptoms similar to the ones I had. Apparently, the French lentils and leek crumbles and the smoothie share a single common ingredient: a protein powder called Tara. I’m hoping this lead can bring me and others the answers we’ve been searching for.