Just when you thought this whole metaverse craze was already verging on the absurd, there has been a major development.

A pair of digital, artificially intelligent beings from the year 2042, who look like multicoloured bunnies, have travelled back in time to set up a shop on Little Collins St, selling digital consumer goods for use in future virtual worlds. 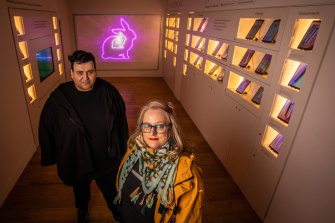 These techno-wares, displayed on tablets around the shop (which has a vaguely familiar feel, not unlike a certain tech company named after a fruit), do remarkable things. Some change your online avatar’s emotions, or your perceptions: making you more empathic, or think you’re a tree. Others are more practical: a backpack that transforms into a metaverse spaceship, a spiky bubble to protect against trolls, a gun that zaps away deepfakes.

There’s a vault where you can store memories away from metaverse hackers. There’s even an injectable ego-death, which is as full-on as it sounds.

Or, at least, it would be, if this was real instead of a pop-up digital art exhibition from artists Anna Reeves and Ace Salama.

Salama says he wanted to take concepts about a potential online future – dystopian and “protopian” – and “crystallise” them in the present, which is why he referenced an Apple aesthetic in the design.

“My hope was that it would make a lot of these concepts feel real through this visual language of technology and consumer goods,” he says. “We have this trust in technology: that it will just perform magic.”

Reeves says they felt a responsibility as artists to ask questions – ethical questions – about the direction that technology is taking us.

Science fiction has been asking these questions for a long time. Technologists such as Mark Zuckerberg are pushing the concept of the metaverse, an immersive online world where we will (supposedly) live, work and play. It is also a key part of the narrative around cryptocurrency and NFTs: the currency and property of the virtual world.

But literally since the metaverse was invented it has come with dystopian fears. The 1992 Neal Stephenson novel Snow Crash, which coined the word to describe a three-dimensional, immersive successor to the internet, imagined it as an anarchic, capitalist free-for-all where malicious hackers use QR code-like images to infect online citizens with mental viruses that can cause real-world brain damage. A generation earlier, William Gibson’s Neuromancer visualised the “matrix” as a Tron-like online universe where immensely powerful artificial intelligences deploy humans as their surrogates in a shadowy cyber-war.

Reeves happily acknowledges their influences. She says the more the merrier in this conversation about where we may be heading.

Salama says the metaverse at the moment is an idea – we don’t have a form for it.

“There’s a push to not have big tech controlling Web 3.0 [a hypothetical future for the internet], like a Meta, like an Apple, and that’s the conversation we’re having now, who’s building it rather than what we’re building.”

But the pair say we should start thinking now about what we’re building – “before it becomes a runaway train,” says Salama.

“Is it Skynet? Is it going to consume us all without any control on our behalf?”

Reeves says it’s time to take the lessons we’ve learned from the way social media transformed our lives and relationships, “before we do this next deeply immersive thing that’s going to go deeper into our minds and bodies”.

“Before we even do that, let’s have an ethical grounding within that … it might genuinely be something beautiful.”

That’s why they imagined a suite of virtual pharmaceuticals that can make you more intelligent, help regulate emotions, expand curiosity or nostalgia, mind-hacks that could help deal with trauma and encourage self-expression.

Reeves says empathy itself – which they imagine as a virtually injectable mental state – is the key to making the online future a better place, where we can join in acts of creation rather than just recreate our real-world conflicts and fears.

They’re using the Store – which is part of the City of Melbourne’s Shopfront Activation program giving low or no-cost space to artists, budding entrepreneurs and artisan makers – not only for the exhibition but to host weekly talks.