Residents of the Iltjiltajarri Aboriginal community in central Australia used to have to truck in diesel along hundreds of kilometres of corrugated, dusty roads.

Diesel powered the pumps that drew life-giving water out of the ground, but was so prohibitively expensive that thirty years ago the community pooled their funds and bought an early-model solar system and battery. 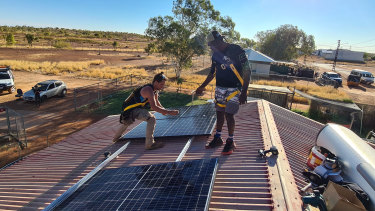 Over time, they added to this set up, and now Iltjiltajarri boasts a large rooftop solar system and battery that can power lights, freezers and air conditioners – which are vital as global warming increases summer temperatures in the Northern Territory.

“It’s a good, workable solution with zero running costs,” says Luritja man Chris Croker, managing director of Impact Investment Partners, which invests with Aboriginal communities in infrastructure projects. “There are many communities across the north embracing this renewable future so we can empower ourselves to get on with life.” 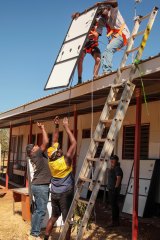 The Marlinja Community Solar Project is a community-led initiative to improve household and community-wide energy security for residents of Marlinja outstation.

The backers of a First Nations Clean Energy Network, launched on Tuesday, say it will ensure Aboriginal people on the front line of climate change benefit from Australia’s renewable energy boom and the economic and employment opportunities it brings.

With state and federal governments under pressure to decarbonise Australia’s coal-powered energy sector after the Glasgow climate conference, founders of the new network – the first of its kind in Australia – say it will equip communities to manage clean energy projects on their land and protect their cultural sites and native title rights.

Original Power executive director Karinna Nolan, one of the founders of the network, said as growing demand drives new renewable energy zones, First Nations consent would be more critical than ever.

“Indigenous land title is now recognised over more than half the Australian continent – encompassing many of our richest renewable energy resources including sun, wind and waters,” Ms Nolan said.

“Communities have told us it’s a basic right to have energy security and what we’re seeing is that’s not the case for a lot of our remote communities.”

The network, supported by the National Native Title Council, the Australian Council of Trade Unions, the Clean Energy Council and others, will provide training and resources to help Aboriginal people negotiate jobs and economic benefits for their communities.

Concerns about energy poverty intersect with the health impacts of rising temperatures in Central Australia. 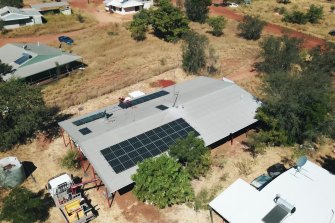 The connection of a solar array on the Marlinja Community Centre reduced power bills from an average of $150 per week to just $40 per month.

Climate and health researcher Dr Simon Quilty, who examines the relationship between environmental heat and wellbeing in the Northern Territory, said Aboriginal people in remote communities and towns like Katherine experienced high rates of poverty, homelessness, and one of the lowest life expectancies in the developed world.

Increasing temperatures, driven by climate change, are exacerbating social inequality, he said. And housing in remote communities, which often does not have insulation or cooling, makes residents vulnerable to extremes.

“People in this situation are very vulnerable to extreme heat, including the kind of heat we’ve had recently that they have never experienced before,” Dr Quilty said.

“I regularly prescribe people medications that are heat sensitive. When they go back to their communities within a couple of days it’s likely the medications have spoiled because of the exposure to heat.”

Australia leads the world in per-capita uptake of solar power, with rooftop solar installed on around one in four homes. But this is not the case in Aboriginal communities, which have faced cost barriers and bureaucratic hurdles to getting it installed on public housing.

Warumungu traditional owner Norman Jupurrurla Frank recently spearheaded a demonstration project that integrated rooftop solar with pre-payment meters in town camps and made his the first Aboriginal Government house in the Northern Territory to have solar panels installed.

But that’s where the progress stalled; four months later and Mr Frank is still negotiating to have the panel connected to the mains.

“For too long, our communities have been forced to rely on dirty, expensive and unreliable power that is undermining our people’s health and wellbeing,” Mr Frank said. “Clean energy is the medicine that our people need. I dream of having solar on every house in town.”