International Women’s Day kicks off 24 hours early across the globe – with protests for equality in Turkey, flowers handed out in Russia and women taking to coffins to represent victims of domestic violence in Israel

Despite the global pandemic putting a halt on many gatherings, people from around the world have already come together to show support for International Women’s Day ahead of the annual observance on 8 March.

This year’s theme ‘Choose to Challenge’ has racked up thousands of posts across social media, with many posting selfies on Instagram with one hand in the air alongside a detailed caption explaining the bias and inequalities they’re championing.

On Twitter, the hashtag has become a way of spreading awareness of protests taking place in over 40 countries – with people spotted in China and Russia arranging flowers, and women in Israel laying in mock coffins to represent those who’ve been killed as a result of domestic violence.

Meanwhile the streets of Turkey, Netherlands and India has been filled with people protesting for equality and seeking justice for individual women.

Elsewhere in the UK and Canada, virtual panels have been organised to celebrate women who have campaigned for positive change. 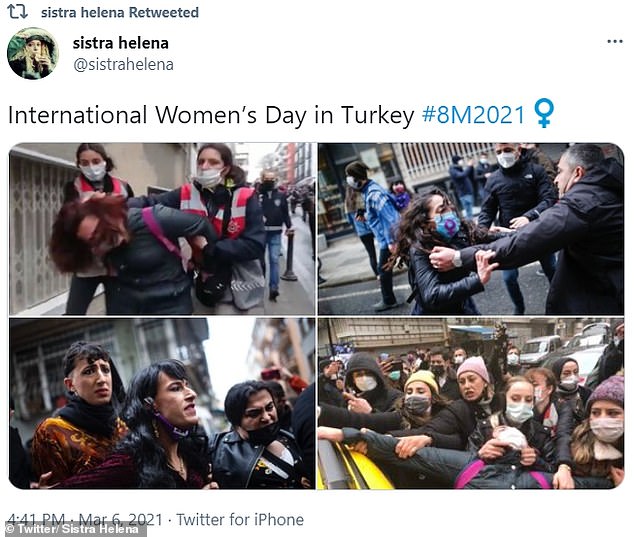 Social media has been flooded with posts about International Women’s Day ahead of the annual observance on 8 March. Pictured: Protesters in Turkey 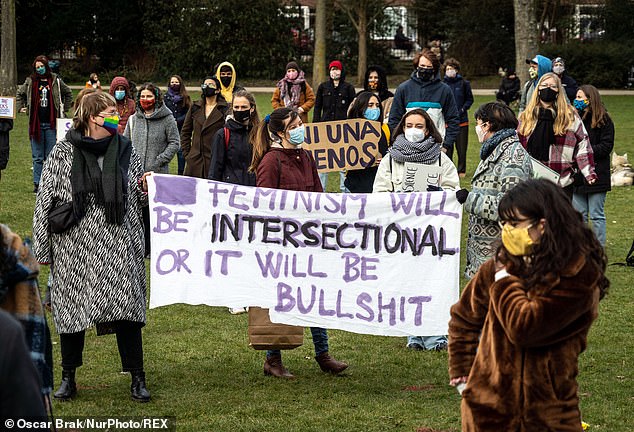 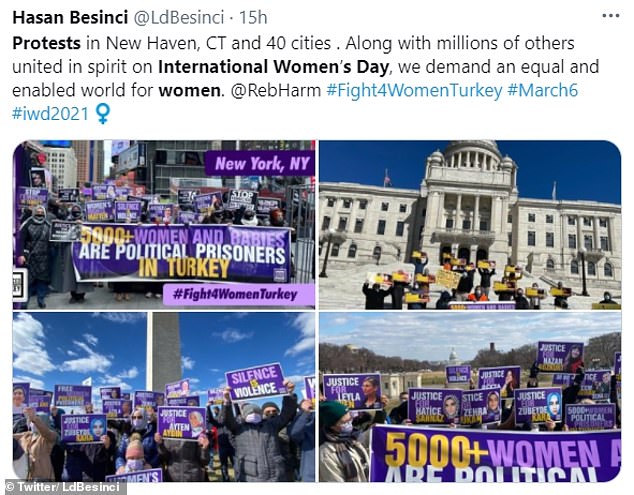 Thousands of people across America have taken to the streets protesting on behalf of women, while also raising awareness of those who’ve suffered injustice and abuse 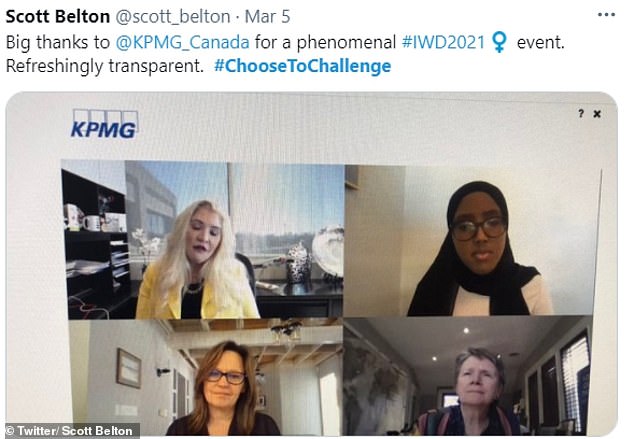 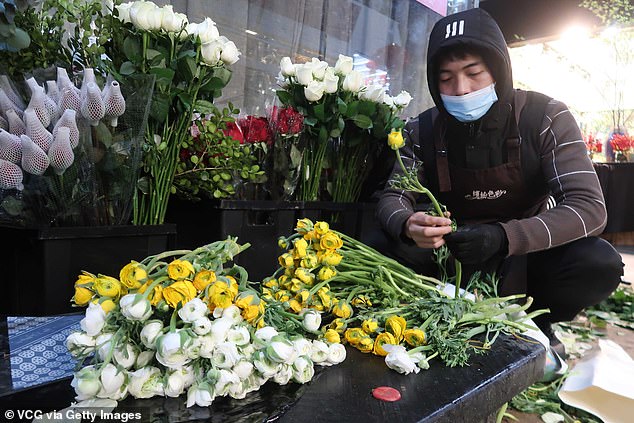 In China, a vendor was photographed preparing flowers at Hongqiao flower market ahead of International Women’s Day

Brands including Bumble, Baukjen, Superdrug and Netflix are among those showing support for International Women’s Day by sharing powerful quotes and items made by women.

International Women’s Day has taken place since the early 1900s – with over 15,000 women campaigning in New York for shorter hours, better pay and voting right in 1908.

It has continuously risen in significance since Clara Zetkin suggested that it should become a global movement during a conference of Working Women in Copenhagen in 1910.

The women who have inspired Häagen-Dazs’s renaming

The renamed flavours have been designed to ensure customers start their order with what they want and end each order with a self-affirming flavour of success – be it ‘scale new heights’ like Raha Moharrak (Vanilla); ‘Beat the odds’ like Yasmin Yousri (Salted Caramel); ‘Direct my story,’ like Nayla Al Khaja (Belgian Chocolate); or ‘Design my destiny’, like Maz Hakim (Strawberries and Cream).

Raha Moharrak: Raha made history as the youngest Arab and the first Saudi woman to climb Mount Everest and The Seven Summits. Raha is a role model proving everyone can achieve the impossible, even for an Arab woman to touch the sky.

Yasmin Yousri: Is a 3-times cancer survivor, style coach, blogger and art director. Yasmin left her corporate career of 15 years to pursue her dream of fashion, inspiring people through the life she has created, beyond cancer.

Nayla Al Khaja: The first female film Director/Producer in the United Arab Emirates. Nayla has written and directed several regional and international award-winning films and TV commercials. Nayla’s accolades include being ranked among the Top 50 most powerful personalities in Arab Cinema.

Maz Hakim: A presenter who’s not only interviewed some of the biggest stars in the world but also hosted the TEDx talk on refugees, as well as TV shows in Afghanistan.

She has recently launched her own clothing line which is a fusion of east and west using handmade Afghan material and made by women in the UAE.

Her collections are already being retailed at international fashion houses and through her brand, Maz aims to inspire and empower women around the world. 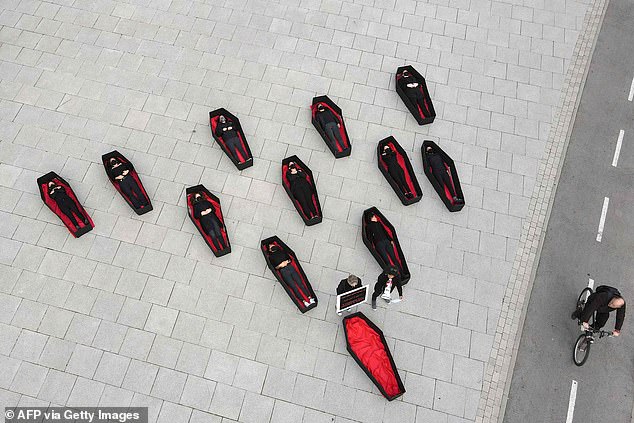 Women in Israel made a powerful display outside the District Court in Tel Aviv today, as they lay in mock coffins to represent those who’ve died as a result of domestic violence 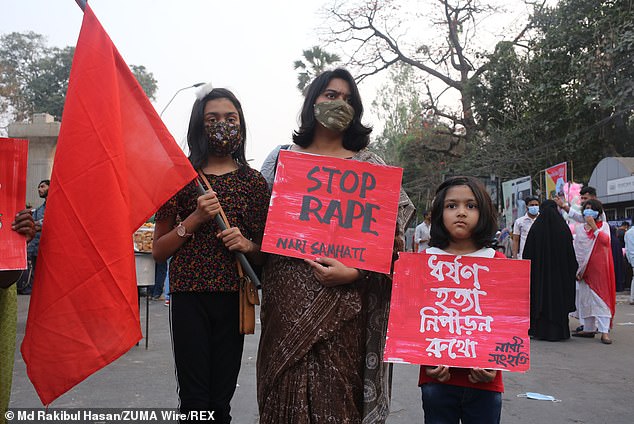 In Bangladesh, women have gathered in front of the National Museum to call for the security, dignity, equal rights, and freedom of speech for women 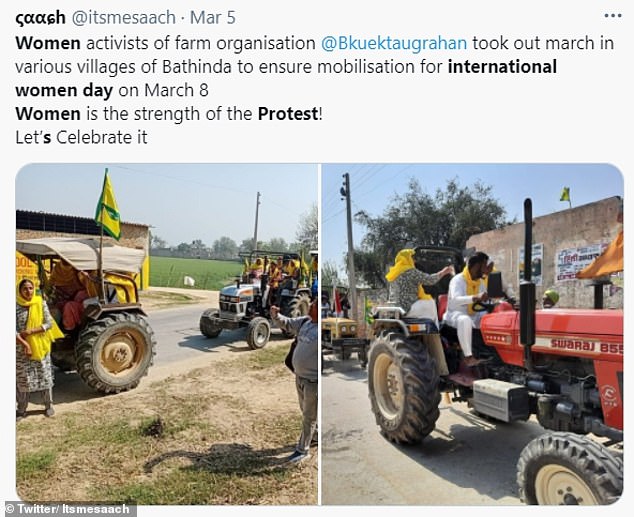 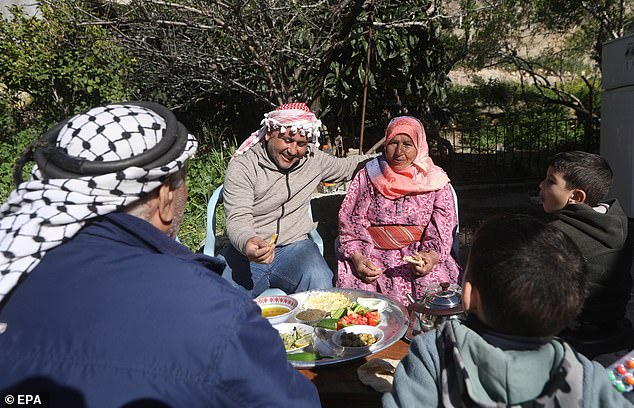 Palestinian Holwa Abu Ras, 80, and her family enjoyed a breakfast at her village of Al Sawiya near Nablus City, West Bank, ahead of the global observation

The International Women’s Day website is calling for people to continue campaigning for gender equality and celebrate the achievements of women.

Speaking about this year’s theme, organisers wrote: ‘A challenged world is an alert world. Individually, we’re all responsible for our own thoughts and actions – all day, every day.

‘Collectively, we can all help create an inclusive world. From challenge comes change, so let’s all choose to challenge.’ 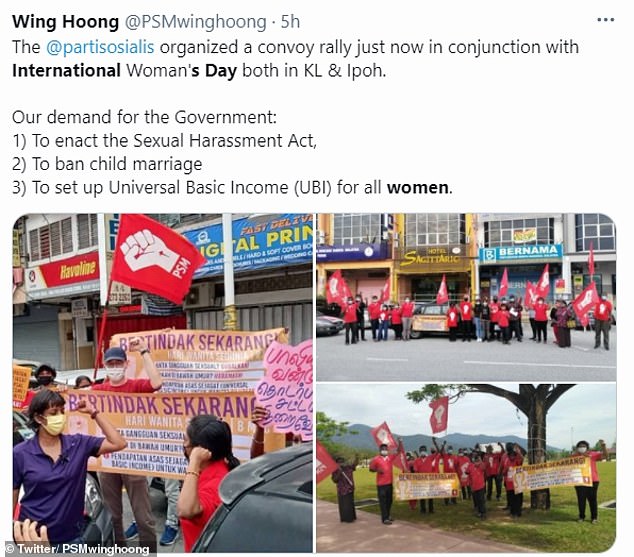 People in Malaysia have come together to demand an end to child marriage, an act against Sexual Harassment and to set up universal basic income for all women 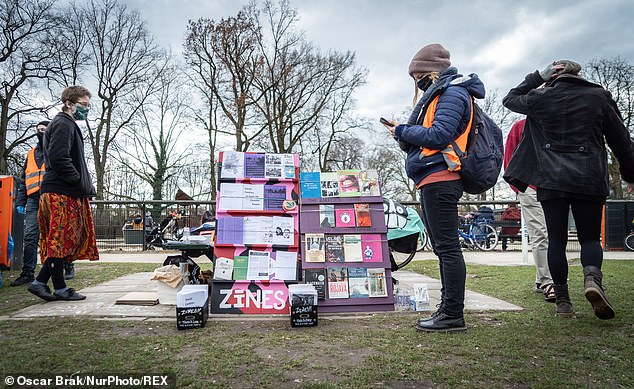 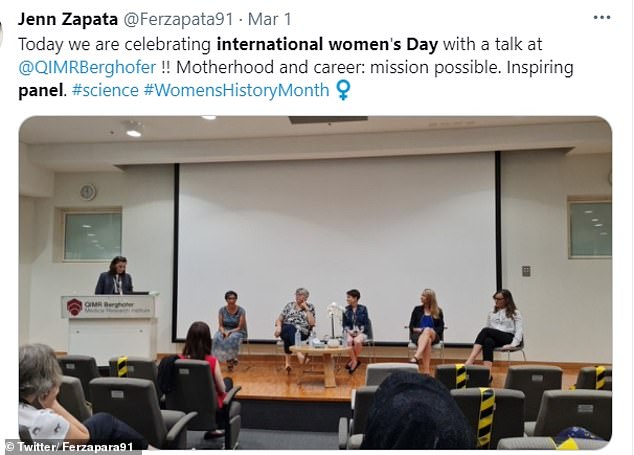 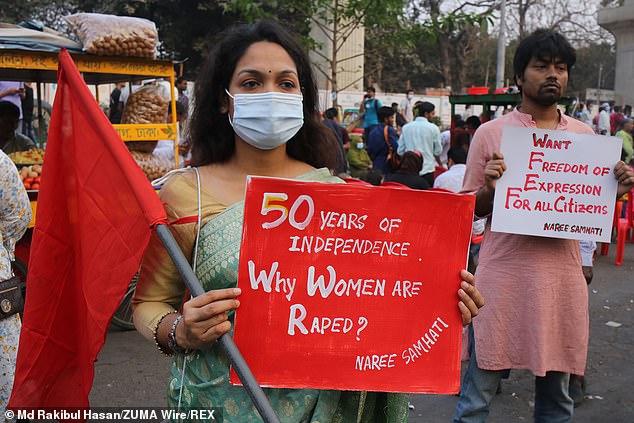 In Bangladesh, people have gathered in front of the National Museum to raise awareness of the injustice experienced by women 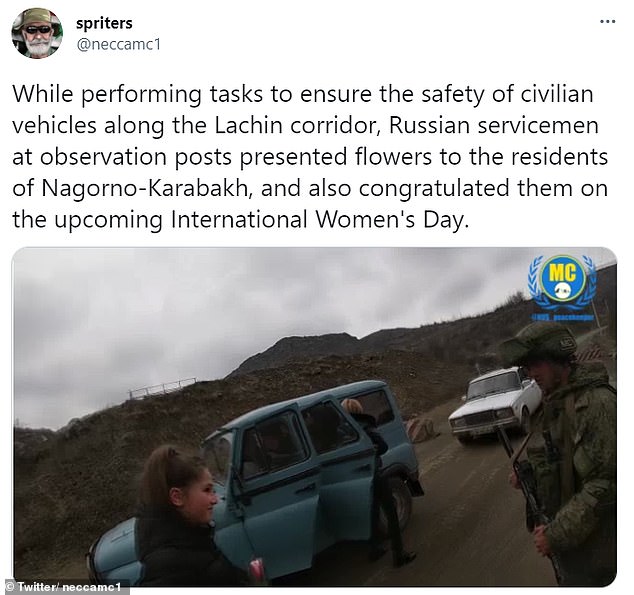 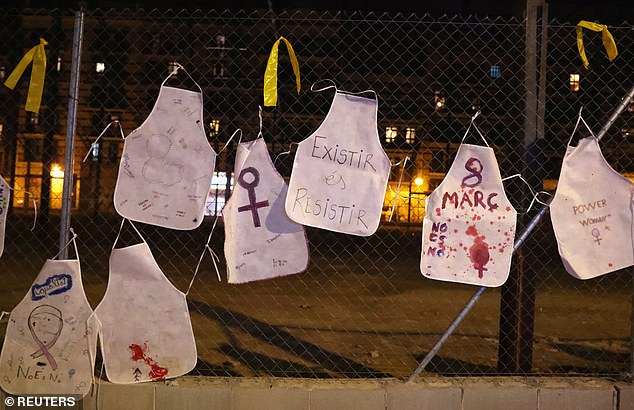 In Spain, aprons have been hung on a fence with different messages to voice the variety of campaigns being championed 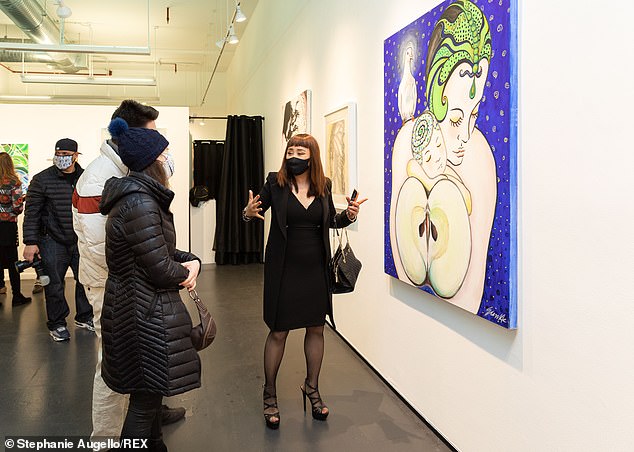 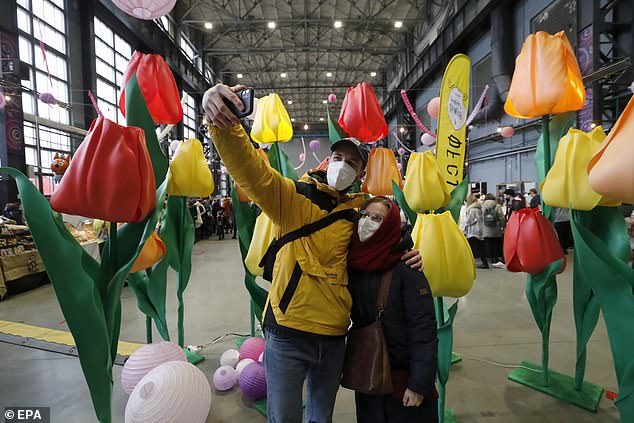 In Russia, people stopped to take photographs at an installation of huge tulips to observe the day of global significance