A Catholic priest has been branded hateful over a sermon about ‘rampant’ sin, and denounced same sex marriage, abortion and the ‘lunacy’ of transgenderism.

A video of Fr Sheehy’s comments, where he also criticised abortion and the trans community, has been shared widely online and has prompted condemnation of his views.

A reported 30 members of the the congregation walked out of the church, including Edel O’Connor who was there to mark the anniversary of her father Eamonn’s death in 2016. 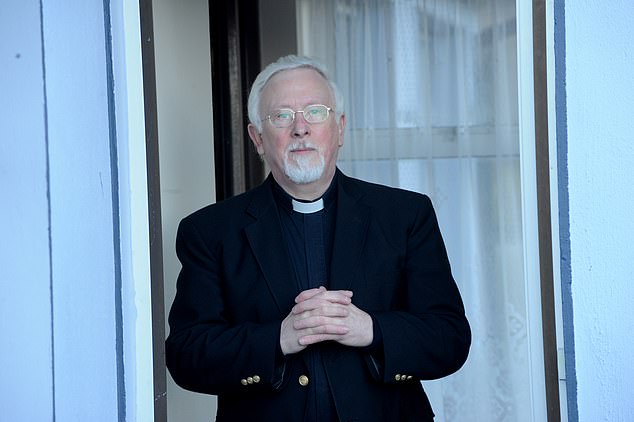 Father Sheehy (pictured) has since been blasted as ‘hateful’ by the daughter of the man who was commemorated during the sermon, but he said he stands by his comments

Taking to social media, she wrote : ‘It wasn’t nice walking out of my Dad’s anniversary mass on Sunday but had to be done.

‘That hateful man does not represent Listowel and the people of Listowel. Moments after walking out a rainbow appeared in the sky.’

As the mass in memory of Eamonn O’Connor got underway, guests were horrified to hear father Sheehy use the platform to denounce the ‘sins’ – for which he has been suspended by the bishop.

During the sermon, Fr Sheehy said: ‘You rarely hear about sin but it’s rampant. It’s rampant. 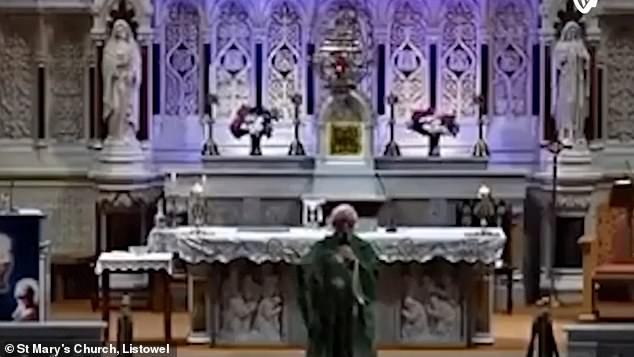 During a bizarre sermon in memory of Eamonn O’Connor, who died in 2016, Father Sheehy went on a bizarre rant about homosexuality, abortion and transgender people being ‘sinful’

‘We see it, for example, in the promotion of sex between two men and two women. That is sinful. That is mortal sin.’

He added it was a ‘fact; a reality’ that these things were sinful.

As he continued the bizarre rant, Fr Sheehy also criticised contraception methods including condoms, which he argued were ‘promoting promiscuity’.

Around 30 guests left the church before the sermon had concluded with Bishop Kerry Browne forced to apologised for the priest’s comments as he was taken off the roster. 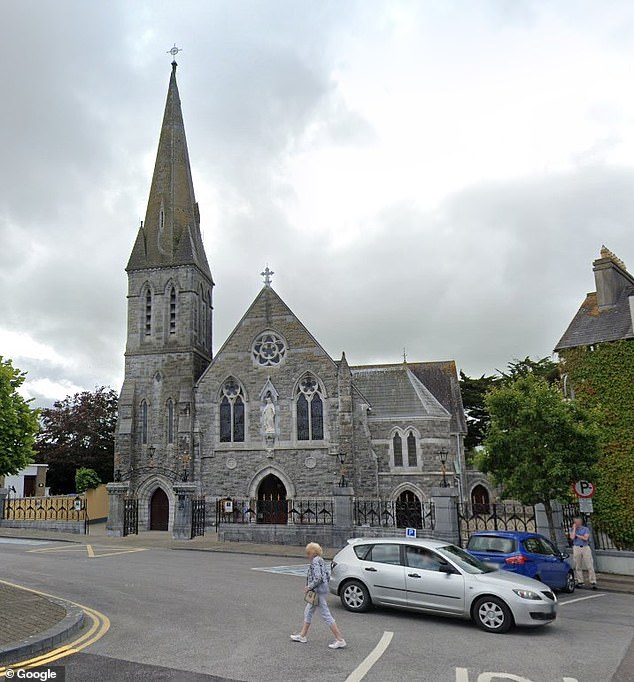 The bizarre sermon took place at St Mary’s Church in Listowel, Co. Kerry, on Sunday, during which several guests walked out

However in an appearance on Radio Kerry on Tuesday night, Fr Sheehy said he stood by his comments, telling the station he ‘couldn’t care less’ about the punishment he had received.

In another radio interview, he claimed he was just passing on the church’s teachings.

‘My answer basically is that I’m giving the teaching of the scriptures and the church regarding homosexual sexual relationships: that they’re sinful and that’s it,’ he said.

Asked if he planned to apologise, he said: ‘Not at all – why would I apologise for the truth?’

Earlier today Independent.ie reported Father Sheehy had come to the defence of a convicted sex offender in 2009, and even burst into the courtroom during his trial to shake his hand.

Danny Foley, from Meen, was jailed for nine years after being found guilty of sexually assaulting a 22-year-old woman in a car park behind a nightclub in 2008, but court proceedings were interrupted by a bizarre display of solidarity from 50 men who barged in to shake the sex offender’s hand.

Father Sheehy even hugged Foley and later explained: ‘I just wanted to support him, just let him know he was not alone.’

In the witness statement he provided in support of Foley, Sheehy said: ‘He always struck me as having the height of respect for women.

‘There is not an abusive bone in his body. His respectfulness certainly struck me.’