An eminent Victorian constitutional expert says the legal rationale that underpinned the decision by the Andrews government and crossbench MPs to withhold a report on bullying and sexism in the state’s fire services is wrong and the document should be released.

Five crossbenchers who blocked the release of a long-suppressed Victorian Equal Opportunity and Human Rights Commission report insist they did not receive a quid-pro-quo from the government to secure their votes, while the opposition accused them of supporting a “cover-up”. 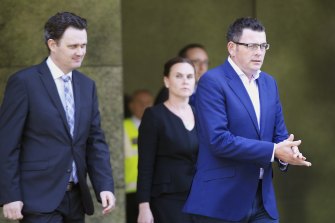 Jane Garrett (back) with Daniel Andrews in 2015 when she was a minister.Credit:Simon O’Dwyer

The politically charged review has never been released after the United Firefighters Union fought to keep it secret. The Court of Appeal suppressed the document after finding in 2018 that the commission did not have the legal right to review the Metropolitan Fire Brigade and the Country Fire Authority.

The crossbenchers supported the government’s argument that the commission would have been acting in contempt of the court if it handed the report to Parliament.

But University of Adelaide professor Greg Taylor, who has written a book on the Victorian constitution, said this legal interpretation was incorrect because Parliament had extremely broad powers to compel any document it sought.

Asked whether the commission would have been in contempt of court if it produced the document, Professor Taylor said: “No. Not if it was acting in accordance with an order of Parliament, which has authority above the court.”

He said some documents that are commercial in confidence or contain sensitive-person information should probably not be compelled by Parliament. The opposition offered to appoint an independent arbiter to ensure no sensitive information was disclosed, and on this basis Professor Taylor said the report “should have been produced”.

The probe was commissioned in 2015 by then emergency services minister Jane Garrett – who now backs the report’s release – in response to an internal review that found 50 per cent of firefighting respondents said they had been bullied and one-third harassed.

The review took place during years of heated political debate about workplace culture within the state’s fire services. The opposition criticised Premier Daniel Andrews for being too close to union boss Peter Marshall, who was accused of toxic and bullying behaviour towards Ms Garrett, who quit cabinet after the Premier sided with Mr Marshall.

Some of the report’s leaked contents were published in The Age in 2018. They detailed “everyday sexism” and a “hyper-masculine culture”.

The Greens, Ms Patten and Mr Meddick said they spoke to the government before the vote but were not offered promises in return for blocking the Coalition push.

Ms Patten argued the Coalition’s motion would have put the commission in the “extraordinary” position of being in contempt of Parliament by not producing the report or contempt of court by handing it over.

She said while Parliament may technically have had the legal authority to order the document, it would have set a troubling precedent for governments to effectively overrule suppression orders.

“I honestly don’t think we should,” she said. “Is the report so fundamentally important that we should override those basic pillars our democracy is established upon?

“I don’t know whether that review would tell us something we don’t already know.”

Ms Ratnam said the Greens had supported previous attempts to divulge the report but “the motion today was essentially asking the commission to break the law by defying an order of the Supreme Court”.

“There is no legal issue. The Parliament has the power to obtain the document and make its own decisions on it,” he said. “The cover-up continues. The government is petrified about the damaging material about victimisation, bullying, harassment and sexism in a government agency. It’s a taxpayer-funded report and they want it to be secret.”

Mr Davis noted that crossbenchers did not oppose the motion in May for the government to produce the document. “Why did they support it last time?” he said.

And, crossbench, Labor, t, wrong
You may also like: