Labor has prioritised the rollout of its $200 million community battery program to repel the growing threat from Greens voters in inner-city seats who are angry at both major parties over climate change policy.

Labor’s shadow cabinet will also meet on Friday morning to finalise its climate policy and its 2030 emissions reductions target before taking it to caucus members for endorsement. Several opposition sources, not authorised to speak publicly, anticipate federal Labor to land on a target “around 40 per cent” or potentially 43 per cent. 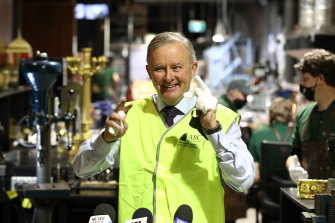 The target would be below Labor’s 2019 target, the Business Council of Australia’s target and that of Britain, the European Union, Canada and the United States. The Greens want a 75 per cent cut by 2030 and net zero emissions by 2035. The Coalition had a 26 to 28 per cent target but upgraded its projections for 2030 to 35 per cent.

The battery scheme, announced in May as part of the opposition’s Power To The People energy policy, will install 400 community batteries across Australia to provide solar power for up to 100,000 households who are mainly renters or owners of flats who cannot install rooftop panels.

Just four batteries have been announced so far, with all of the projects in Labor-held seats in suburbs where the Greens Party has either won local booths at the past two elections or have come within 100 votes of Labor.

While the opposition says the majority of the batteries would be awarded if it wins government, the early announcements leave Labor open to similar pork-barrelling claims it has levelled at the Morrison government over several grants-for-votes programs.

Typically the size of a four-wheel-drive vehicle, a community battery provides about 500kWH of storage that can support up to 250 local households.

Announcing how the batteries would be allocated in May, Labor leader Anthony Albanese said the party would “identify some of these locations based on data about household take-up of solar and batteries” and “the rest through an application process.”

Batteries will be installed in Coburg and Brunswick, which are both in the Labor-held inner-northern Melbourne electorate of Wills. Labor MP Peter Khalil lost the Coburg and the Brunswick North booths to the Greens at the 2016 election but, without a Liberal candidate in the race, won the Coburg booth by less than 130 votes to the Greens, and the Brunswick North booth by only 13 votes at the last election.

In the seat of Maribyrnong, held by former leader Bill Shorten, Labor has committed to build a community battery in Flemington-Kensington. The postcode has the second lowest level of installed capacity of all postcodes in Maribyrnong and the lowest total energy output from solar in all Maribyrnong postcodes.

Formerly in Greens MP Adam Bandt’s seat of Melbourne, Labor failed to make the two-party preferred count at both the Flemington and Kensington booths at the 2016 election, with the Greens winning 45 per cent and 46 per cent of the primary vote respectively. Labor’s vote was boosted after the last redistribution.

Another battery had been promised for Alphington in the seat of Cooper, held by Labor frontbencher Ged Kearney. The suburb has the lowest solar capacity of any postcode in the seat but local environment groups have spent years lobbying for the project.

Mr Bandt said Labor had “given up on climate” by joining the Liberals in backing more coal and gas.

“Putting batteries in the city won’t make up for Labor opening new coal and gas mines in the country,” Mr Bandt said. “Batteries are great, but powerful inner-city voters want Labor to stop siding with the Liberals in backing 116 new coal and gas projects.”

An opposition spokeswoman said the policy was about bringing down power prices for households and supporting the grid.

“Other local households – like renters and apartments who are often locked out of rooftop solar, will also be able to draw from the batteries.”

She said the batteries would be allocated in two rounds with some over coming months, based on demonstrated community interest and publicly available data about solar and battery coverage, while communities would also be invited to apply for a battery under a Labor government.