Bruce Lehrmann described the evening he spent drinking with colleagues on March 22, 2019 as “an innocuous night” when giving police his account of events on the date he was accused of raping his fellow political staffer Brittany Higgins in Parliament House.

In a recorded police interview played to the jury in the second week of his sexual assault trial, Lehrmann said he never went into Linda Reynolds’ office the night Higgins alleges she woke to him having sex with her on the senator’s couch. 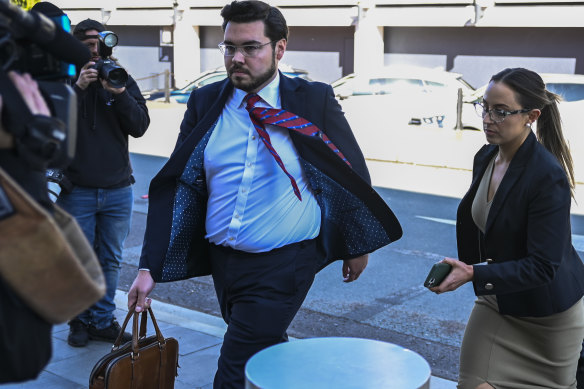 Bruce Lehrmann arriving at court on Friday morning. He has pleaded not guilty.Credit:Getty

Lehrmann told police in the interview in April 2021 it was “possible” he could have acted intimately with Higgins during a night out with colleagues, but denied raping her in the early hours of the next morning in Reynolds’ office, and said, “I wouldn’t dream about going into the minister’s office at all”.

He has pleaded not guilty to a charge of sexual intercourse without consent.

Higgins was unavailable to continue her evidence for most of the second week of Lehrmann’s trial in the ACT Supreme Court. A non-publication order that applied to other evidence in her absence was lifted on Friday.

The court heard last week that Lehrmann and Higgins were part of a large group of political staffers and defence personnel who converged on The Dock bar in Kingston on March 22, 2019 before a group of four, including the pair, progressed to club 88mph in central Canberra.

Higgins said she had agreed to share a cab with Lehrmann after leaving the club and the accused said he needed to stop at Parliament House to pick something up.

In the interview played to the jury on Monday, Lehrmann told federal police he told the group he had to go back to parliament to get keys to the apartment where he was living with his girlfriend, and “Brittany also indicated that she had to attend parliament for something”.

“I thought I was being a gentleman, I ordered an Uber and said it was fine if you want to share an Uber,” Lehrmann told police. Asked whether Higgins mentioned why she was going back to parliament, Lehrmann replied: “no, it shocked me [about] the timing that she had to do that … but that’s her business”.

The court heard Higgins had consumed 11 drinks at the first venue and continued to drink at the club, later telling police she was the most intoxicated she’d ever been.

Department of Defence media adviser Lauren Gain, who was one of the group of four, told the court on Monday she remembered Higgins being “quite drunk” and had fallen over in front of them at the club.

In Lehrmann’s interview with police in April 2021, he said he was only “moderately” intoxicated when he arrived at the building in the early hours of March 23, 2019 with Higgins. Asked by police how intoxicated he believed Higgins was, he said she was “probably about the same”.

“From my observations, I had no reason to believe she was any worse than anybody else,” he said.

During the interview, Lehrmann said he and Higgins had behaved in a “close” way throughout the night, but said it was “quite friendly” and in the nature of opening a door for her.

“It was actually a very good night,” Lehrmann said of the evening. “It was such an innocuous night … for staff to be out drinking, this was not an unusual night.”

Asked whether he behaved intimately with Higgins, he said “I know we were close, but I just can’t remember”. He agreed it was possible but said his behaviour wouldn’t have gone beyond flirtatious. “Absolutely not, because I was in a relationship,” he said.

He said their demeanour had been professional upon arriving at parliament at 1.41am. ”I don’t remember it being anything else … I was just sort of ensuring that she got to the office to do what she needed to do at the very least … then indeed to do what I needed to do.“

Parliament security guard Nicole Lee Anderson, who was working overnight, told the court on Monday “it was strange for them to be there at the time” and that her workmate, Mark Fairweather, remarked as much to the pair.

The court heard that Lehrmann had told parliament security he’d been requested to pick up some documents.

The pair were let into Reynolds’ suite, and Lehrmann said the last he saw of Higgins that morning was when he turned left to his desk and “Brittany turned right into the minister’s suite”. Lehrmann said he spent the rest of his time annotating question-time briefs and left after ordering an Uber at about 2.30am.

Police asked why he didn’t speak to Higgins before he left, to which Lehrmann replied: “All I said was, I’m getting what I need, and I’ll do what I need to do, and I’ll head off … there was nothing in my mind that said to me that I need to be looking after her”.

Anderson told the court Fairweather observed that Lehrmann “seemed in a hurry to get out” upon leaving the building, throwing his temporary pass down as he left.

Fairweather told the jury, Lehrmann, “was on the phone, he wasn’t paying attention. I wanted to ask him about the lady and I said, ‘are you coming back?’ and he just replied hastily ‘no’ and flicked the pass onto the desk, and before I could ask him any more, he’d already walked out.” 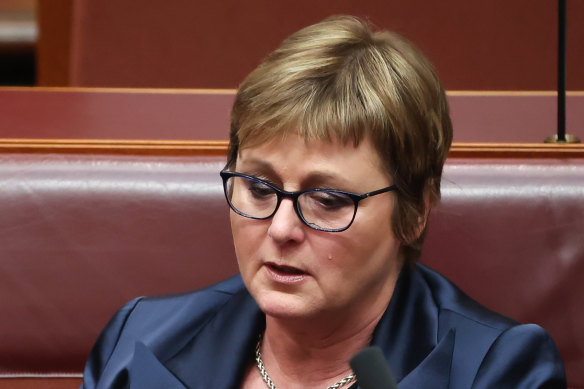 Former Coalition minister Linda Reynolds will give evidence in the trial next week.Credit:Alex Ellinghausen

Anderson said that she went back to the suite to do a welfare check on Higgins, and when she opened the door to the minister’s office, she saw Higgins “lying on her back, completely naked on the lounge”.

“She’s opened her eyes, she’s looked at me and she’s proceeded to roll over in the foetal position facing the desk,” Anderson said.

Higgins alleges she woke to Lehrmann having sex with her on the couch, she was jammed against the back and armrest, crying and couldn’t get him off.

When police asked him to respond to Higgins’ claim, he said: “I won’t be able to comment because I didn’t see her in that state. I’ve certainly got a lot of views about it all coming out in the media, but that’s not relevant here”.

Reynolds’ chief of staff, Fiona Brown, told the court on Tuesday “there was no urgent work purpose” for either of them to be at the office.

She had told police that Lehrmann had told her he went back to the office to drink whisky, but he denied that account.

“Definitely not the reason for going back into the office … I just would’ve stayed out drinking,” he said. He elaborated that it wasn’t unusual to go back to the office to drink, but it was usually in the company of a minister or senior staffer. “I’d be drinking with the whole office,” he said.

Reg Chamberlain, chief of staff to then-special minister of state Alex Hawke, gave evidence on Wednesday that he had a phone conversation with Lehrmann and Brown on April 5, 2019, about accessing parliament after hours. 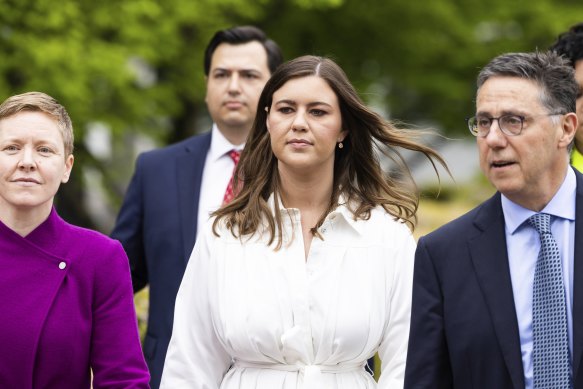 Brittany Higgins arriving at court in the trial in Canberra.Credit:Alex Ellinghausen

“When we asked what his purpose was, he said it was to have whisky, to drink whisky,” Chamberlain said. Asked whether Lehrmann mentioned it was for work purposes, Chamberlain replied, “no, he just said the purpose was to drink”.

Aide de camp Captain Nikita Irvine told the court on Wednesday that Higgins had also told him they were going back to parliament “because Bruce had something he wanted to show her. It was some whisky or something”.

One of Reynolds’ staffers, Nicole Hamer, told the court on Tuesday that Lehrmann had “quite a big range of alcohol” in the office, including whisky and wine.

Hamer said that before Higgins worked in Reynolds’ office, Lehrmann asked her to reach out to Higgins. “He commented that she was good-looking,” Hamer said.

Higgins’ former Canberra housemate Alex Humphries described Higgins as “bubbly” when the pair first met, and “so enthusiastic about landing her dream job”. She said that changed around the time of and after the 2019 election, staying in her room a lot and keeping to herself. “She was always a tidier person … and that slipped,” she said. “She was doing a lot of frozen meals and she’d come out with a pile of dishes at the end of the week.”

Higgins’ mother, Kelly Higgins, said her daughter, who had grown up participating in public speaking and volunteering for the Young Liberals became distant and quiet during March and April, 2019. “Her appearance changed, she lost a lot of weight … she just looked broken,” she said.

Kelly Higgins said her daughter told her during a dinner in late 2019 what allegedly happened.

Higgins’ boyfriend at the time, Ben Dillaway, told the court on Wednesday that after Higgins disclosed the allegation “a light had turned off in her, she was a broken, shattered person”.

Dillaway said when Higgins was “struggling significantly, not coping with things”, he told a colleague in the Prime Minister’s Office, Julian Leembruggen, about the alleged incident, with her approval.

“I said, let me discreetly go speak to someone in the Prime Minister’s Office because surely this can move things along, or surely this will get you the help you need,” he said.

”I checked multiple times, got her okay before I went out and met with them to … seek assistance for her.“

Defence department liaison officer Chris Payne, who worked in the same office as Higgins and Lehrmann, told the court on Tuesday Higgins disclosed the allegation to him early in the week following the incident. “I said, ‘did he rape you?’ She said, ‘I could not have consented, it would have been like f—ing a log’.”

Irvine also said Higgins had disclosed the allegation to her during the same week. The court heard from witnesses who worked with Higgins in Senator Michaelia Cash’s office after the election that she had also alleged to them that she had been assaulted.