The board president of the collapsed high-rise near Miami warned residents two months before the deadly tragedy that parts of the building’s infrastructure were seriously decaying, according to a letter obtained by multiple media outlets Tuesday.

In the letter dated April 9, Surfside’s Champlain Towers South’s condominium association president Jean Wodnicki explained to residents why an assessed $15 million in repairs to the building was necessary.

“The concrete deterioration is accelerating,” she wrote, noting that the damage was expected to “multiply exponentially” in the coming years. “When you can visually see the concrete spalling (cracking), that means that the rebar holding it together is rusting and deteriorating beneath the surface,” she explained.

“The roof situation got much worse, so extensive roof repairs had to be incorporated,” she wrote in the letter, which was first obtained by The Wall Street Journal and USA Today.

In one ominous line, Wodnicki writes: “A lot of this work could have been done or planned for in years gone by. But this is where we are now.” 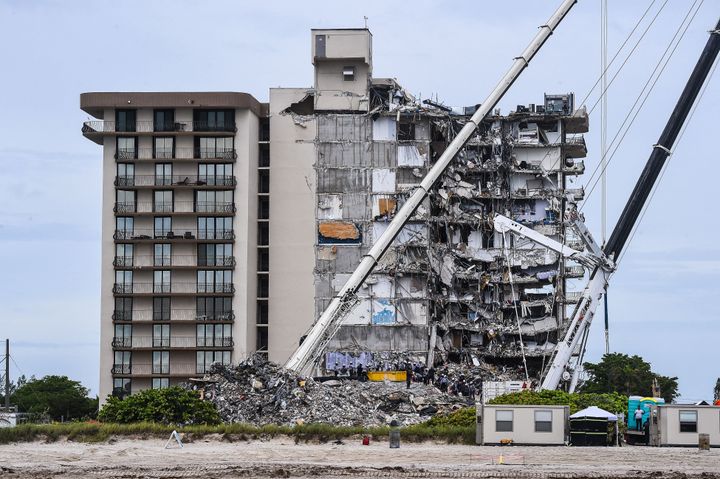 This wasn’t the first time someone tried to raise red flags about the building, which was built in 1981. In 2018, an engineer warned of damage to its concrete that would likely spread.

A lawsuit on behalf of the victims and their families blames the condo board for the collapse, saying its members are responsible for “failures to secure and safeguard” the lives and property of residents.

Surfside town manager Andy Hyatt said Tuesday on MSNBC that the onus is on condo associations to complete building inspections on schedule and work with the city to start any repair processes.

“Each condo association is responsible for their own structural engineering as far as the Miami-Dade County code is concerned, so we lean on them to bring things to our attention,” he said.

Hyatt, who was elected in November 2020, said in another interview with The Washington Post that he’s going to “tighten the screws” and make building inspection policy more stringent.