The Liberal candidate for a seat taking in Melbourne’s LGBTQ heartland argued Australian rugby player Israel Folau had nothing to apologise for over his comment that hell awaits gay people, and when asked about reducing gender-based violence, said there was bad behaviour by both genders. 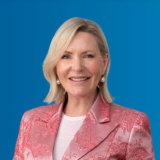 Colleen Harkin, the Liberal candidate for Macnamara, an inner-city seat that takes in progressive areas such as St Kilda, also described lockdowns in Victoria during the pandemic as “martial law”.

Labor holds the electorate with a 6.25 per cent margin but the Liberals came close to winning it in 2016.

In a candidate forum this week, the Liberal hopeful was asked about her policies to reduce gender-based violence and gender inequity. While research suggested one in four women had been sexually assaulted, she said the Jenkins review into Australian Parliament’s workplace culture found that about 60 per cent of bullying was carried out by women.

“So there is poor behaviour on both sides of the fence … What I’m saying is it’s not just women. It’s women and men,” she said. “We have to acknowledge bad behaviour by both genders.”

In response, a young woman shouted from the crowd: “You’re insane. Bullying and rape are the same thing, everybody.”

“I didn’t say that,” Harkin replied.

Folau was at the centre of a free speech row in 2019 when he repeatedly expressed his view that gay people needed to repent to avoid going to hell.

Both sides of the dispute later apologised as part of a legal settlement, but it helped prompt the Federal government to seek to protect religious speech in legislation with what was described as the “Folau clause”.

Harkin at the time took to Facebook to defend the player’s right to make these remarks: “He did not ever say he hates gays. He quoted from the bible a passage about all the types that need to repent to enter heaven,” she wrote. “Folau shouldn’t have to apologise for expressing his personal beliefs”. 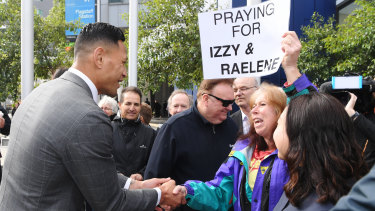 Israel Folau at a federal court hearing in 2019.Credit:Justin McManus

These views may well be endorsed by some in the Liberal and National party rooms, but would likely be seen as inflammatory in a seat such as Macnamara.

Harkin, who has been involved in the IT sector, has a master’s degree in education and worked for Senator Jane Hume, also posted on Facebook during Melbourne’s lockdowns saying, “DAN IS A DICK”, that “martial law” had been in place in Victoria and people who were not “scared” of COVID-19 should not be subject to restrictions.

In 2012 she became involved in a dispute with a flooring company named Renaissance Parquet after what she alleged was an “amazingly disgraceful” installation.

A VCAT judgment in 2013 found Harkin was owed $21,435 for the work on her house because the company was at fault, but in the meantime, she had threatened to publicly trash the company’s reputation.

Harkin wrote that she would register a domain name that matched the company name adding: “I intend to make this website available to anyone in the marketplace who maybe (sic) looking for flooring, of all the factual information we have, and of the full extent of our experiences with you”.

Hans Unger, who owns the flooring company, said Harkin spruiked her small business credentials on a web page advertising her candidacy, but suggested that what she actually stood for was “destroying a small business”.

“The way she attacked and bullied was completely underhanded,” he claimed. “We’ve never come across anyone like her and I’m really suspired she is running for public office.”

The former unsuccessful Bayside City Council candidate wrote that she had conducted DNA testing to prove the unauthenticity of the flooring material used by the company, and sought $30,000 in compensation.

The Age reported on April 26 Harkin’s belief that describing global warming as a climate emergency was akin to child abuse and her defence of controversial Warringah candidate Katherine Deves’ views on trans women playing women’s sport.