The chairman of the influential House economics committee, Tim Wilson, is requesting superannuation funds disclose the value of their real estate assets and proportion of members who are home owners as he steps up his campaign to let first-time buyers tap into retirement savings for a deposit.

On Friday, Mr Wilson began sending funds a dozen new questions to answer as part of the standing committee’s review into banks, financial institutions and the superannuation sector. 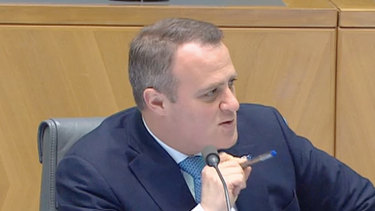 Liberal MP Tim Wilson is campaigning for buying a first home to be prioritised above saving for retirement.Credit:

The Victorian Liberal MP’s letter came as Labor senator Kimberley Kitching criticised his campaign to let workers access super savings early for a home deposit and warned the financial future of women would be damaged if a legislated rise in the superannuation guarantee was delayed.

A copy of the questions being sent to funds by Mr Wilson, seen by this masthead, includes queries about the type of housing investments made by the funds, the value of these assets and data about the use of super balances by retiring members to pay down mortgages.

Mr Wilson, who is also a property investor, also asks the funds to clarify their position on whether members should be able to use retirement savings for a home deposit.

“Australians should not become serfs to their own super fund. Big Super’s hypocrisy needs to be exposed – they’re happy to use your money to buy houses for you to rent, but oppose you using your money to buy a home you own by backing home first, super second,” Mr Wilson said.

The idea has attracted the support of a group of Coalition backbenchers and MPs as well as former Reserve Bank governor Bernie Fraser.

But it has been criticised by the super funds, Labor and the unions for raiding retirement savings, pushing up property prices and locking young buyers into inflated mortgages.

In a column for the upcoming all-women edition of the Labor-aligned John Curtin Research Centre’s flagship publication The Tocsin, Senator Kitching warns women could be the victims of tinkering with the super system.

A woman’s median superannuation balance at retirement was 21.6 per cent lower than a man’s, she said, warning the government was laying the groundwork to “crab walk away” from the legislated rise in employer super contributions from 9.5 per cent to 12 per cent.

“By delaying this increase on the never-never, what the government is actually doing is entrenching inequality in retirement – especially for women,” she said.

She said Mr Wilson’s campaign was a “much bigger problem [than the super guarantee issue] for the Australian Labor Party” as it could undermine the super system by making it voluntary.

“I agree that we should aim for both [home ownership and retirement savings], but I reject the notion that this is a binary choice,” Senator Kitching said.

She said secure and affordable housing was a critical part of the retirement system for women, who are more likely to be homeless, and there should be an increase in rent assistance alongside more affordable and social housing investments.