Double-dosed Australians should be free to leave the country without seeking permission from next month, several Liberal MPs argue, ahead of a national cabinet meeting on Friday that is set to progress plans to end more than 18 months of hardline restrictions.

The nation’s borders have been shut since March 2020 following the first domestic outbreak of the coronavirus, with residents seeking to leave the country required to apply to the federal government for a travel exemption for specific reasons. 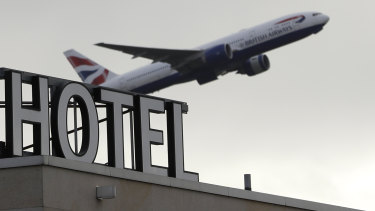 Liberal MPs want to end the requirement for Australians to get an exemption to travel overseas.Credit:AP

About 210,679 Australians have been granted approval to fly overseas in that time, according to Home Affairs department data, with 122,131 applications rejected.

Major airlines have opened international bookings for December but have warned several issues will need to be sorted, including recognition of vaccines not recognised by Australian health authorities, hotel quarantine caps for un-vaccinated travellers and negative pre-departure testing.

Trent Zimmerman, a NSW Liberal MP for North Sydney, said with a return to international travel now on the horizon it was time to end the restrictions on Australians leaving the country.

“We have been perhaps the only country to prevent its citizens leaving in this way and while it has been important in managing the flow of people exiting and re-entering, time’s up on these restrictions continuing for fully vaccinated Australians,” he said.

“I have seen the emotional toll it’s placed on many Australians needing to visit families overseas, often in very emotionally difficult circumstances.

“While Home Affairs has granted exemptions for compassionate purposes, those wanting to travel have had to assemble rigorous proof of the validity of reasons to go – often adding to the trauma of an urgent family crisis overseas such as major illness, care for elderly parents or end-of-life visits.”

Several Liberal MPs, including Victorians Katie Allen and Tim Wilson and NSW MPs Dave Sharma, Jason Falinski and Mr Zimmerman, have been agitating internally to reopen the international border sooner than planned for Australians vaccinated against COVID-19. They argue they should be able to self-isolate at home on their return, without states having to raise their hotel quarantine caps.

Prime Minister Scott Morrison told Sky News Australia this week that the implementation of home quarantine and apps proving COVID-19 vaccination were what Australia needed “for international travel to work”.

“The QR code readers that the states have, they need to work to be able to show whether someone has been vaccinated or not. We’re working with the states and territories to enable that.”

Mr Sharma, the member for Wentworth, said he wanted Australians free to travel overseas once again without an exemption or permit, as soon as possible.

“For fully vaccinated Australians, this should be when we reach an 80 per cent vaccination rate, in line with the national cabinet decision. This would be the restoration of a key personal freedom,” he said

Dr Allen, who represents the Melbourne seat of Higgins, said lifting travel restrictions should be complemented with protocols including home-based quarantine and rapid antigen testing.

“I look forward to hearing the results of the SA pilot about how effective it is,” she said.

Mr Falinski argued that international restrictions should be lifted for each state when they hit the 70 per cent vaccination mark.

“There isn’t someone who doesn’t have a friend, family or someone they care about living overseas,” he said.

Queensland MP Julian Simmonds said Australians wanted freedoms returned and national cabinet must return freedom to travel for those who have done the “hard yards” and been vaccinated.

But he said it was important that any agreement made by the states in national cabinet was adhered to.

“In my state of Queensland it is clear Premier [Annastacia] Palaszczuk will say one thing in national cabinet and then move the goalposts if she thinks it benefits her politically,” he said.

Victorian Labor MP Julian Hill said people were desperate to be reunited with family overseas, but the Morrison government would “get no thanks” when it finally lets people out of a lockdown prison.

“There would be no travel bans now to lift if the Morrison government had ordered enough vaccines last year,” Mr Hill said.

Austra, ban, Liberal, MPs, on, Want
You may also like: