‘Like a flower’: The exquisite art of Ako Kondo

There were always two works scheduled for the Australian Ballet’s second program in its 2021 Sydney season: Raymonda Act III and Artifact Suite. Then a third was added – Tchaikovsky Pas de Deux – and it turned out to be the highlight of the evening. 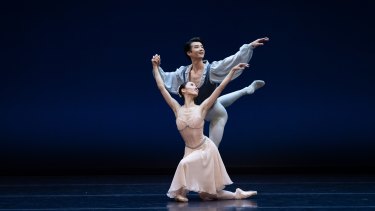 In the hands of the opening night cast, Ako Kondo and Chengwu Guo, this pas de deux brought the stage alive with George Balanchine’s inspirational play on classicism, choreographed in 1960.

Kondo is an exquisite dancer. Light and fast, she often looks like a flower opening its petals in moves that expand her gestures and propel her across the performing space. Guo’s aerial work is spectacular. His high leaps have twists, turns, kicks and rolls built in.

Together, they created a beautiful partnership, with close attention to each other adding a warm dimension to their virtuosity – which included breathtakingly fast exits into the wings, dancing at full pace. Their courage, as well as their skill, made their appearance a benchmark for the company.

The bare, wide-open stage is often filled with more than 30 dancers in simple tights and tops – or it could be just two. For the first half of the piece, to a J.S. Bach Chaconne, the curtain comes down about half a dozen times with a noisy crump, punctuating these contrasts. The breaks in vision (though not music) are accompanied by lighting changes that completely alter the look of the piece, sharpening the viewer’s perceptions. 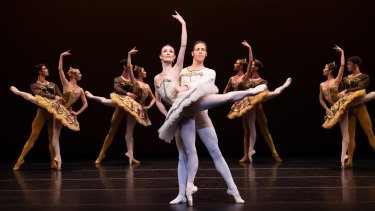 For the second half, to a contemporary composition by Eva Crossman-Hecht, the curtain remains aloft as the dancers perform in relentlessly changing ensembles that are alternately mesmerising and disturbing in their patterns.

The style of movement is established at the start in a semaphore shape, with hands raised and arms squared off, the group often moving in marching motion. But then Forsythe surprises us with a chorus line of 12 male dancers. And again with the men in the company – who are responding well to new challenges – in an ensemble of five, followed immediately by another five.

Artifact Suite may not be a Forsythe work to love at first sight, but it certainly won’t send you to sleep. And it offers interesting opportunities to the dancers, notably on this occasion Ako Kondo and Adam Ball, Benedicte Bemet and Christopher Rodgers-Wilson.

The company’s high technical quality was established from the start of the evening with Raymonda Act II. Led by Amber Scott and Ty King-Wall in neatly nuanced performances, the dancers were precise in carrying through the steps choreographed by Marius Petipa in 1898 to engaging melodies by Aleksandr Glazunov. But they lacked the virtuosity and theatricality to make them shine.