Follow
Home » Lifestyle » LINDSAY NICHOLSON: Why no mum should go on her daughter's hen do

LINDSAY NICHOLSON: Why no mum should go on her daughter's hen do

Why no mum should go on her daughter’s hen do: By LINDSAY NICHOLSON, who lived to regret it

The vodka shots were lined up in front of the bride-to-be. The assembled hens were consulting their phones for a drinking game called ‘Mr & Mrs’ where the bride is quizzed on how well she knows the groom, sinking a shot for every answer she gets wrong.

Where’s the harm in that, I hear you ask? 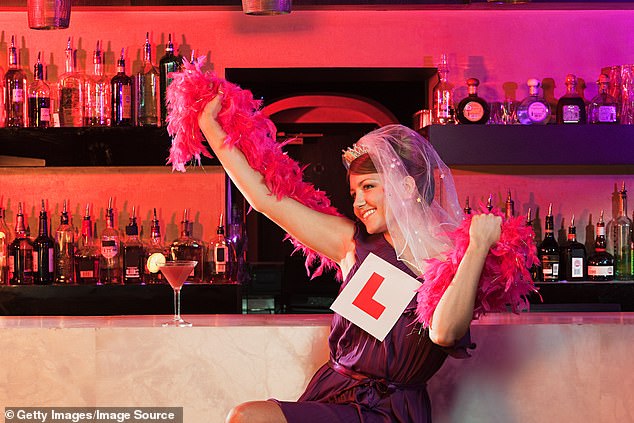 Lindsay says: ‘For myself though, I might decline future offers and revert to what the older generation has traditionally done while the young party: the more conventional role of, er, babysitting!’

The only problem is, it was my daughter getting married. And I was a willing prisoner, smiling gamely as I learned more than any mother really wants — or needs — to know about her offspring’s sex life.

So it was with a shudder that I saw pictures last week of Newsnight presenter Kirsty Wark sipping a cocktail at her own daughter’s hen do. I wondered if she knew what she was in for. I also wondered what on earth had possessed me to say yes to my daughter’s hen weekend.

I wasn’t expecting an invitation when Hope, 29, got engaged. I had, however, started to hear tales from other friends who had been along to their own daughters’ bashes. 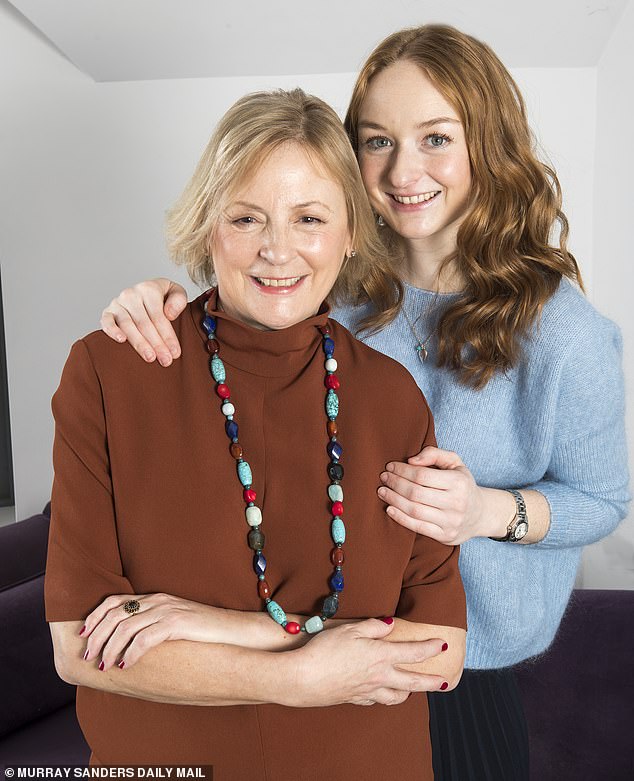 Lindsay and her daughter Hope. Lindsay writes: ‘I wasn’t expecting an invitation when Hope, 29, got engaged…’ 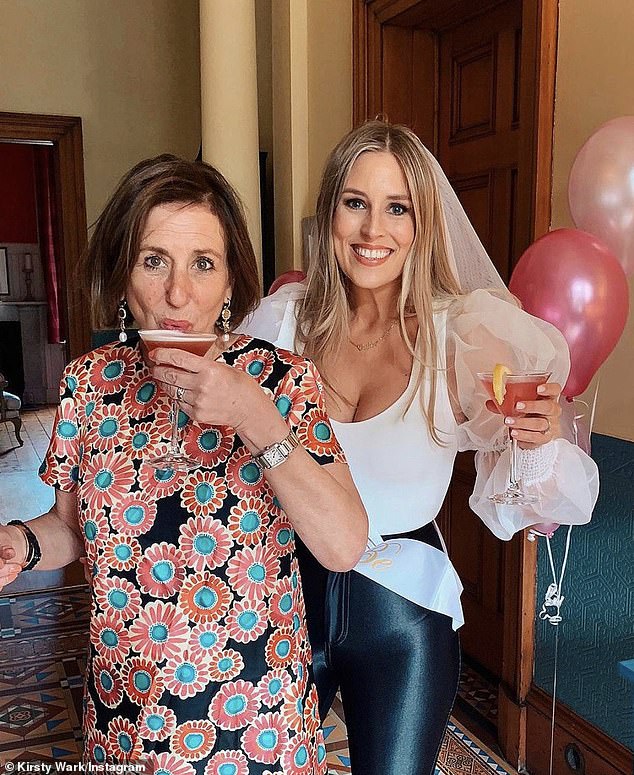 One reported that the maid of honour got so drunk she was refused entry to the nightclub she had booked. She sat outside so squiffy and dishevelled that passers-by started throwing change at her.

The mum in question confided to me later that she was just proud to have stayed awake until 4am.

But another pal told me she ended up feeling she had to be a mother to the whole group. During the dancing at a pub disco, she’d spotted a leak from the water pipes that she worried would electrocute the entire wedding party.

The young revellers were naturally oblivious. She didn’t dare say anything for fear of being labelled fuddy-duddy, so spent the entire evening worrying about how she would break the tragic news to the hens’ own mothers.

Many brides now prefer a ‘fren-do’, inviting friends of both sexes. One I know invited an ex-boyfriend…who brought along his mum. The tension between the jubilant mother-of-the-bride and the dashed hopes of the not-quite-mother-of-the-groom only exacerbated the drinking all round.

And then there’s the fear you’ll end up getting a little too involved. One mother I know woke up by a river with an ironing board and no idea how she got there. Apparently, it was something to do with a dare. 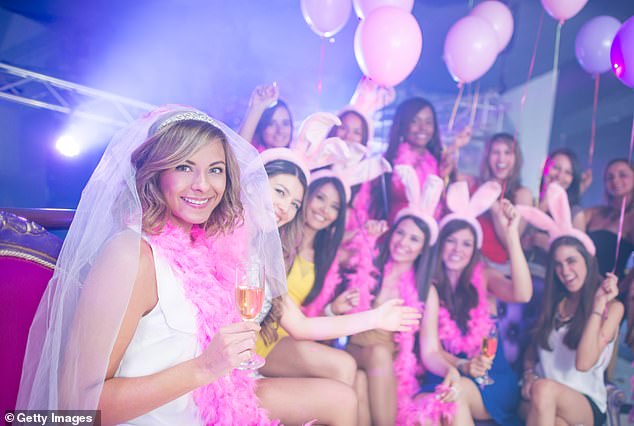 Many brides now prefer a ‘fren-do’, inviting friends of both sexes, Lindsay says

So suffice to say that, although no wild partier myself, when I found I was on the guest list for Hope’s very modern hen weekend, I was too intrigued to say no.

Of course, the concept of a stag party dates back hundreds of years. Traditionally, the groom’s friends celebrate his last night of freedom with a great deal of alcohol. I know of one groom who broke both arms on his stag do, and it was a race against the clock for him to be out of plaster in time to put a ring on his bride’s finger.

But hen parties are a much more recent invention. The term didn’t exist until 1940 when Eleanor Roosevelt coined it to describe an all-female gathering of ‘tea and chit-chat’ — no alcohol involved.

There was something called the bruydale in medieval England. The bride made beer and sold it to guests at an inflated price on a day before the wedding, presumably to finance her married life.

That sounds like a great idea, but had died out hundreds of years before I married Hope’s father in the 1980s.

Back then, I had never even heard of hen parties, let alone an entire weekend. Nor had any of my friends. We were mostly marrying in our early 20s, fresh out of uni. Alcohol to us meant wine, usually served with a meal. Pubs were places that sold draught beer and pickled eggs. It was only in 1982, after the wine bar El Vino’s lost its case in the Court of Appeal, that pubs and bars were legally banned from refusing to serve women at all. 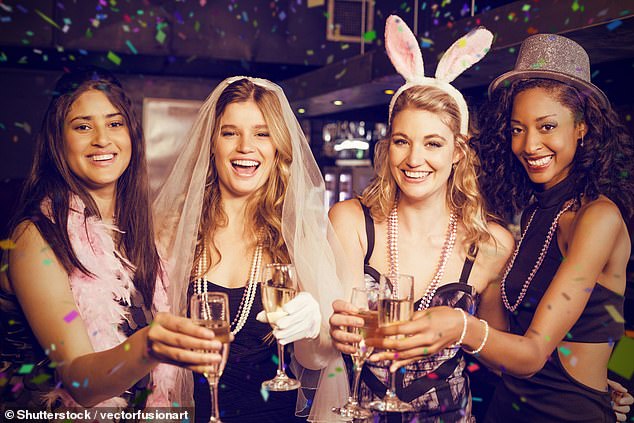 Hen parties are a much more recent invention. The term didn’t exist until 1940 when Eleanor Roosevelt coined it to describe an all-female gathering of ‘tea and chit-chat’ — no alcohol involved

El Vinos turned out to be a watershed, as wine bars began opening up with an appeal to women, and so-called ladette culture took off. Unbelievably, this was the first time it was the norm for groups of women to socialise with alcohol outside the home.

With the success of the male striptease group the Chippendales, and the film The Full Monty (1997), the idea of replicating the traditional male stag night took off. The hen party was born.

By that time, though, I was a mum, as were all my friends. We missed out on male strippergrams and chocolate-shaped…(well, you can imagine) madness at the turn of the 21st century.

When I married for the second time in 2004, I decided to combine a dress-fitting in Dublin with a hen weekend.

Such was the reputation of hen and stag gatherings by then that it wasn’t possible for us to make a single-sex group booking with the airline. We had to organise our flights individually and not make eye contact with each other for fear of being turned away at Gatwick. Luckily no cabin crew spotted the flashing devil horns and red feather boas tucked into our hand luggage.

Much as I love my own mother, it didn’t occur to me to invite her along. As we toured the Dublin pubs in a horsedrawn carriage, I saw enough of the other hen and stag dos in progress to feel nothing but relief that we were all too tired for a nightclub and were tucked up in our hotel beds by midnight.

Still, I was delighted when I received an invitation to Hope’s hen weekend at a rented cottage. I wasn’t the only oldie — my cousin came, too — and it was multi-generational, as two of the hens brought new babies along.

Nobody started drinking at breakfast time. There were no flashing devil horns. It was all perfectly lovely — and I pondered how we have matured out of the ladette culture.

But then…there was a hot tub, and someone had brought a jeroboam of prosecco. Suddenly the evening took on a more traditional hen party flavour. 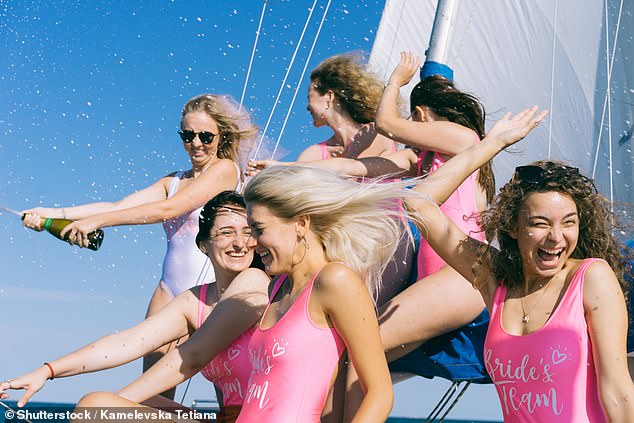 Lindsay writes: ‘Even though it is a relatively new tradition, I hope my nieces will one day invite not only their same-age friends but mothers and aunts, too, if they have a hen celebration’

It was time to make a discreet exit. I sloped off to a quiet sofa in another room to check my work emails, trying to block out the raucous laughter from next door. Until I realised that one of the hens was standing next to me, sort of shrieking. Something about a baby.

It turned out that the sofa where I had plonked myself was where one of the newborns had been swaddled in blankets and surrounded by cushions. I was almost sitting on her child.

The mother’s screams attracted the attention of the other hens who ran in. I had, in my own small way, ensured my daughter’s hen party would be memorable.

No harm was done. And the rest of the weekend continued to be a celebration of friendship and wishing Hope well as she embarks on the next stage of her life.

Even though it is a relatively new tradition, I hope my nieces will one day invite not only their same-age friends but mothers and aunts, too, if they have a hen celebration.

For myself though, I might decline future offers and revert to what the older generation has traditionally done while the young party: the more conventional role of, er, babysitting!