Follow
Home » Lifestyle » Little logic: 10 ways my grandson is smarter than me

Little logic: 10 ways my grandson is smarter than me

I love my grandson Pip, but I’m worried he’s not as bright as his grandfather. For a start, there’s the hiding game. He signals “it’s on” and so the pair of us disappear under the quilt. I’m deputised to yell “Nana” and Nana dutifully comes.

She fusses around, wondering where we are. She notices – for Nana is quite sharp – the giggling lump under the quilt.

“What’s that?” she asks, suddenly suspicious. Under the quilt Pip shooshes me, his finger against his lips in the traditional manner. 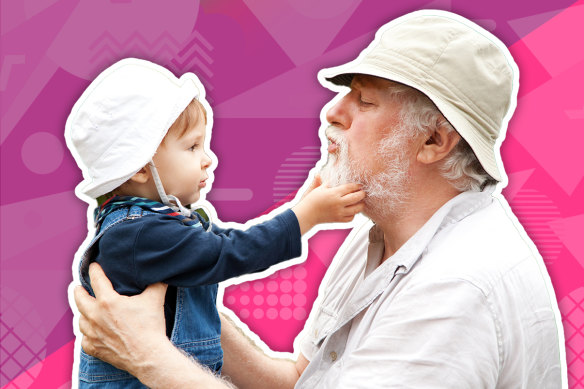 His hide-and-seek game needs work but, in general, my grandson is the brains of this operation.Credit:Kathleen Adele

I have three points to make about his strategic skills. First point: I’m not the one giggling. It’s him. Mate, shoosh yourself.

Second point: his shooshes need work. The finger to the lips is great, but he says the word with an intake of breath, rather than an expulsion of breath. It comes out as “oosh” not “shoosh”. Cute? Yes. But it’s not achieving the level of quiet we require.

Third point: for all the “ooshing”, he’s not entirely covered by the quilt.

“Oosh” he says to me again, breathing in against his finger, his body trembling with suppressed excitement, and I feel like saying: “Mate, I’m not the one with his legs sticking out from under the quilt.”

After some minutes, Nana spots the two little legs and rips the cover from our sanctuary

“I’ve found you at last”, she says, using the customary phrase.

“We were hiding all along”, I say, using the customary phrase.

Pip then makes it clear he wishes to hide again, in the same spot, while Nana is still in the room, and still with his feet sticking out.

Mate, I think she’s going to spot us.

In terms of hiding, Pip may not be strategic as his Pa but, I confess, he is generally smarter than me. Let me count the ways:

1: Pip knows it’s always worth having a laugh, even when nothing funny has happened.

2: Pip knows sometimes you’ve got to cry, even when nothing sad has occurred.

3: Pip knows a dirty Maccas wrapper, picked up on the footpath, can prove an object of some fascination, providing you pay it sufficient attention.

4: Pip has a sleep in the early afternoon and awakes totally refreshed. This is enormously wise and yet something I’ve always found impossible to achieve, even in the dreamy days of summer holidays.

5: Pip knows that, of all the occupations, builders are the most interesting to watch. We stand there, for what seems to be hours, with me constantly hinting it’s time to leave, when suddenly we are rewarded with some startling moment, like when the mortar is poured from the concrete mixer – splodge! – into the wheelbarrow. Thank God we stayed.

6: Pip knows that a good book is worth reading many times. I can list books which I know changed my life, and yet I’ve read them once, decades ago. If Pip likes a book, he’ll demand it be read again and again, day after day, until he has sucked out its marrow. I make a note to re-read all my favourites.

7: He knows, conversely, that should a book prove boring, it should be literally thrown to the ground. I think of all the terrible books with which I have persevered until the dreary, dismal end, trying to salvage time already wasted, vainly hoping the author would have something to say, and I know Pip’s method is better.

8: He knows that if an activity brings pleasure, it’s worth repeating. And so, he likes to walk atop of the low brick fence, in front of the house down the road, back and forth, back and forth, me holding onto his elbow, until I fear the owner might object that Pip’s wearing down his wall. Why do grown-ups believe fun needs to be rationed?

9: He is eclectic in his theatrical tastes. When Nana first does her comedy act, the one titled “Help I’m being sucked into ground beneath the kitchen bench”, I think it’s rather overdone. She shouts, she wails, and her arms flail as she is dragged down into the vortex. All that drama only to bob up a second later and say: “I’m OK.” Pip thinks it’s the most hilarious thing in the world. With his help, I’m beginning to see the truth: in the best of theatre, flamboyance beats restraint.

10: Pip knows that life is more enjoyable if, when possible, you consider the needs of others. His parents, for example, tell me he has tired of the TV show Bluey, having watched it too many times, but he still selects it when he’s over at our house. His father explains: “He knows it’s your favourite”.

Back under the quilt, Pip presses a quivering finger to his lips, and sucks in his breath several times. “Oosh, oosh, oosh”. This time, he seems to have his feet under the cover.

Poor Nana. She’ll have her work cut out this time.