A man with a ‘titanium belly’ has amassed more than four million views on TikTok after experimenting with how far he can stretch the shelf life of foods.

Gavin Wren, 44, from Forest Gate, east London, has eaten a fried egg 73 days past its best before date – when another the same age had turned green.

He’s also scoffed hummus 17 days out-of-date – only stopping when a microbiologist found bacteria in it.

And he also recently posted a video of himself eating a big spoonful of yogurt, 31 days after its use-by date. 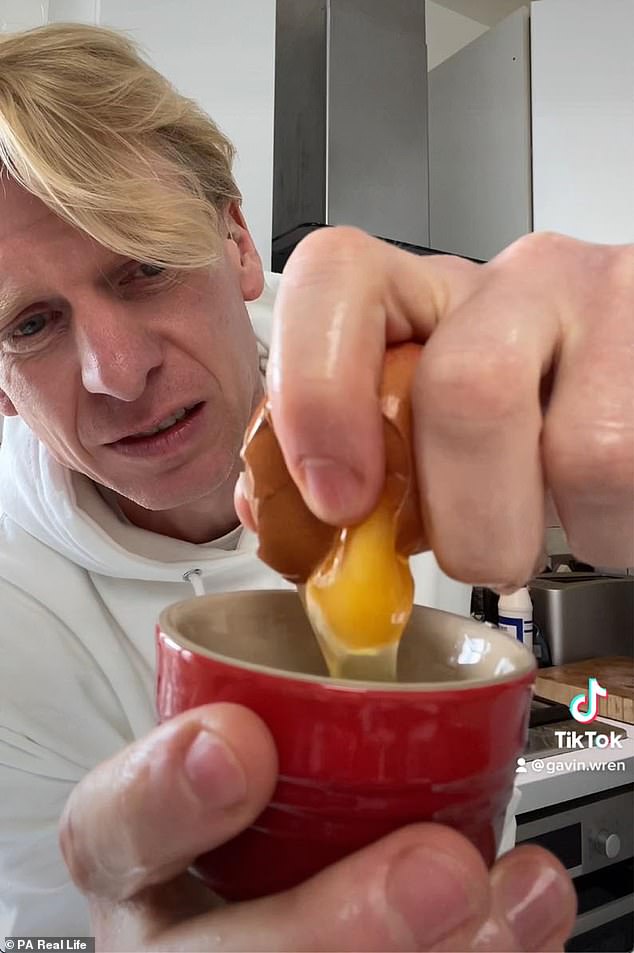 One of Gavin’s best-known experiments was eating an egg, which he fried, two and half months past its sell-by date. 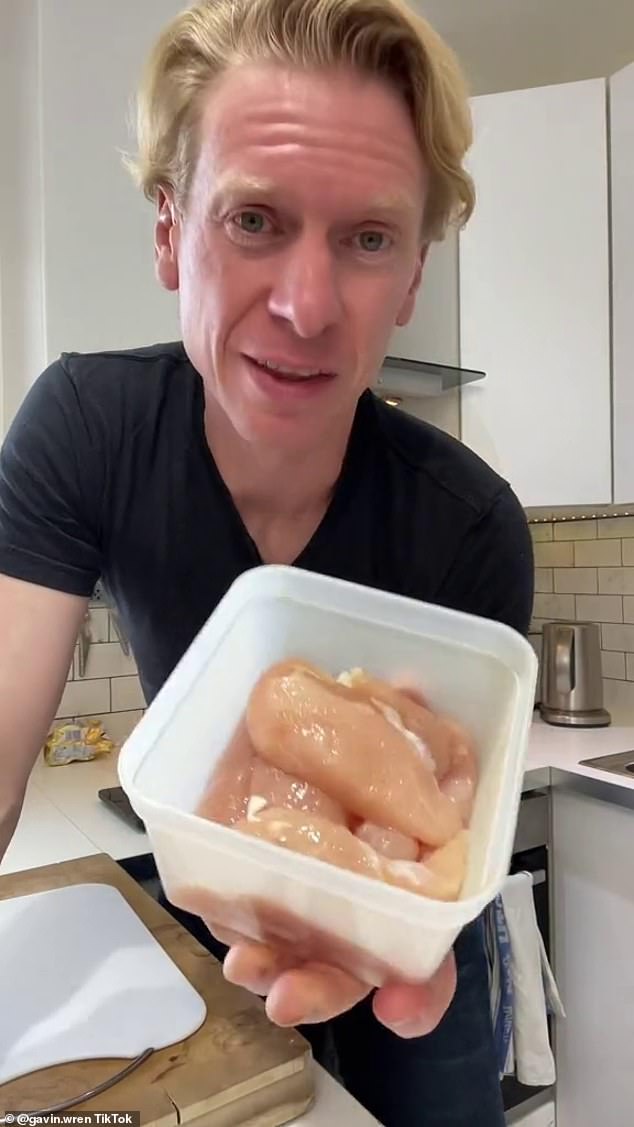 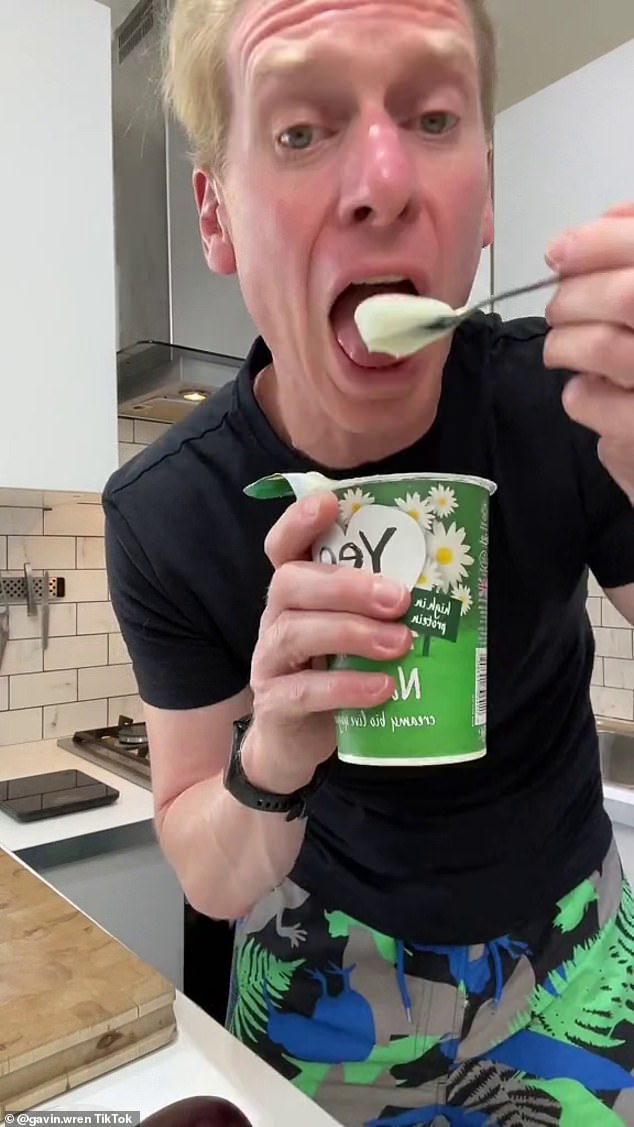 Gavin is on a mission to highlight the issue of food waste. Britain throws away 9.5million tonnes of food a year, even though 8.4 million people in the UK are in food poverty. He recently shared a video of himself eating yogurt 31 days past its sell-by date 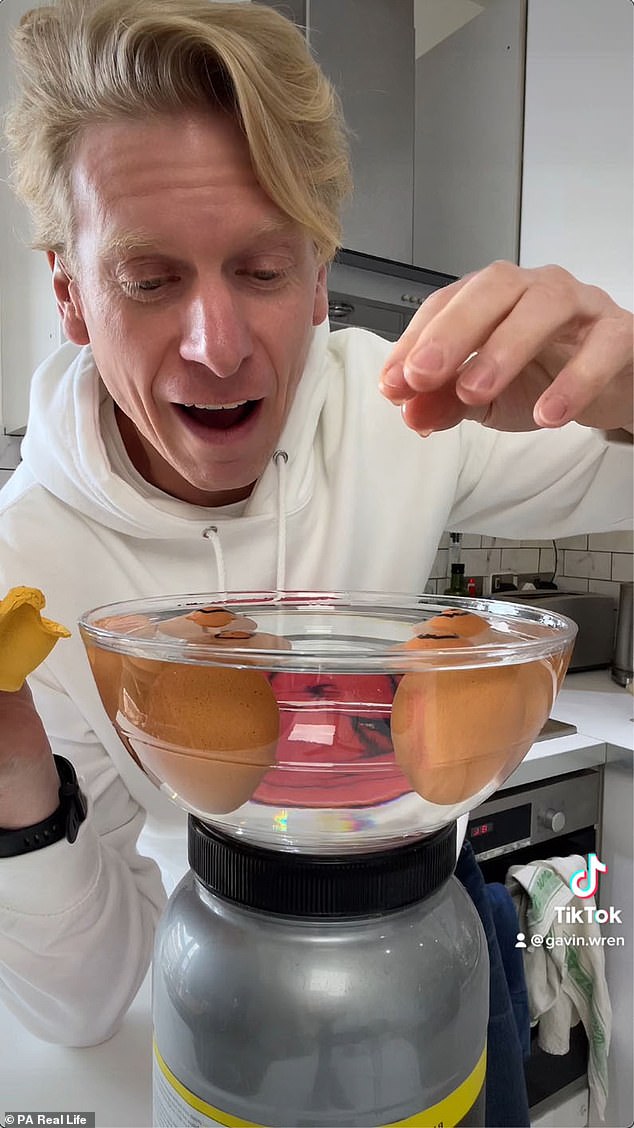 In his popular egg challenge, Gavin kept four eggs in the fridge for more than 2 months then tested them in water to see if they would sink – an indicator that they were still fine to eat 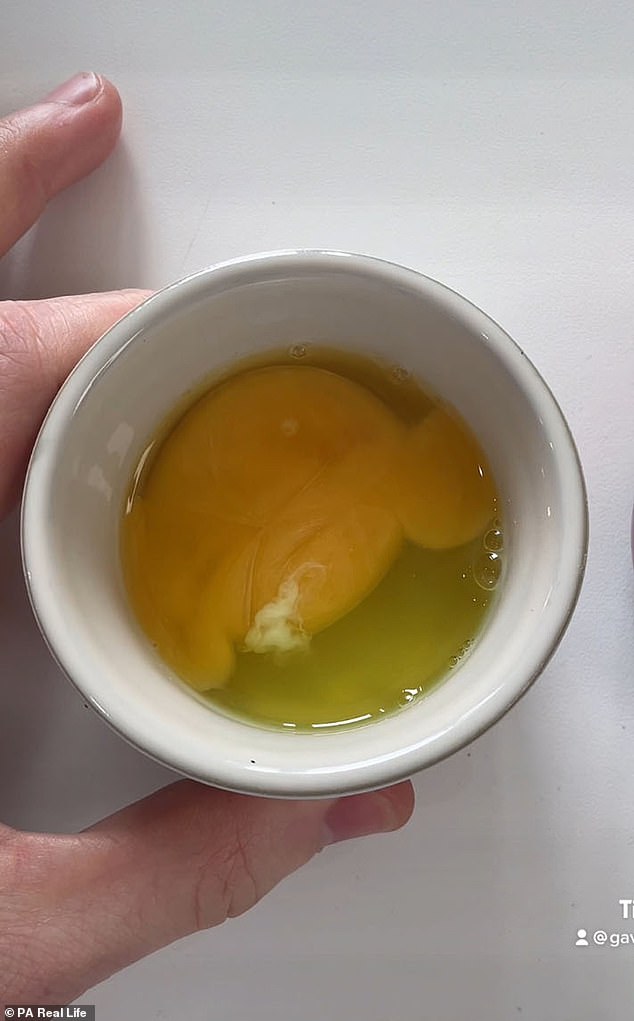 One of the eggs was essentially green slime, although Gavin insisted that it didn’t smell bad

With his chicken challenge, Gavin left chicken in the fridge for several days past its use-by date – examining it each day to see if it had changed colour, texture or had started to smell.

On day three, he noticed the chicken had gone slimy – and sensibly refused to eat it because he didn’t want to be ill.

Although fun, Gavin actually started posting the bizarre challenges to highlight how much food is thrown away unnecessarily.

Britain throws away 9.5million tonnes of food a year, even though 8.4 million people in the UK are in food poverty.

He said, ‘I am shocked by the amount of food that we waste.

‘I grew up in a family where if something looked and smelled alright, you would just eat it. Maybe that gave me a titanium belly.

‘But the point of the challenges isn’t to shock or gross anyone out, but to show people that food can last far longer than you would expect.

‘People always ask me if I have been sick, and I swear to God not once have I ever had any stomach problems or any sickness.

‘I have been absolutely fine with all of them.’ 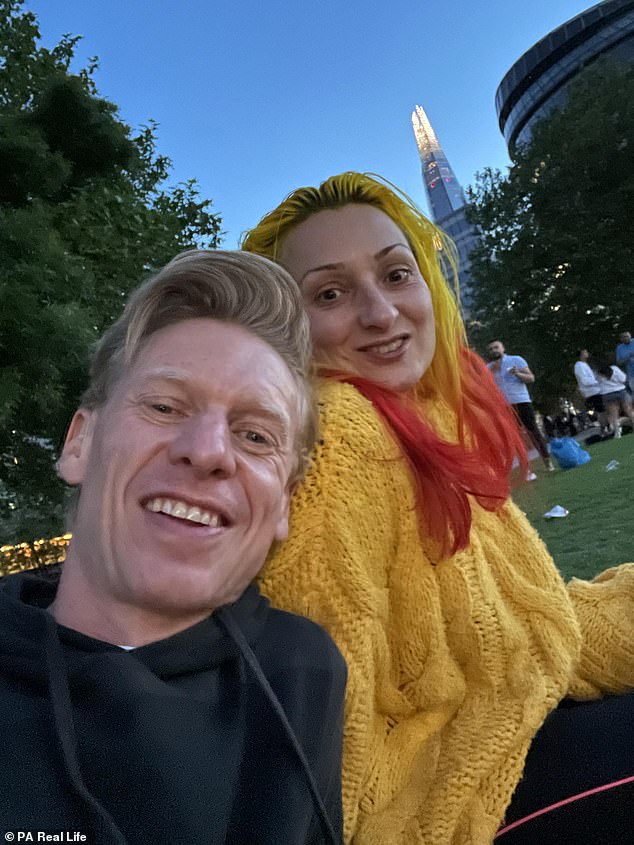 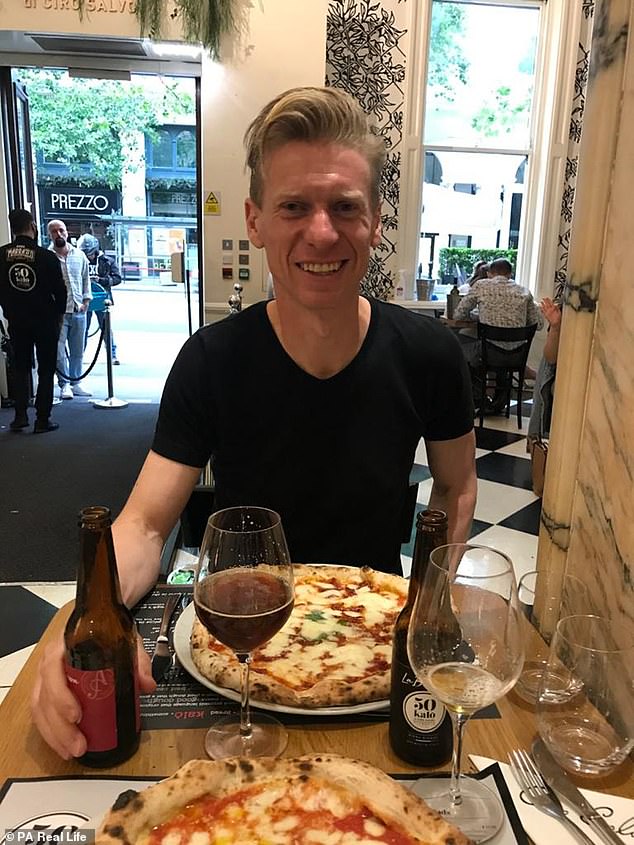 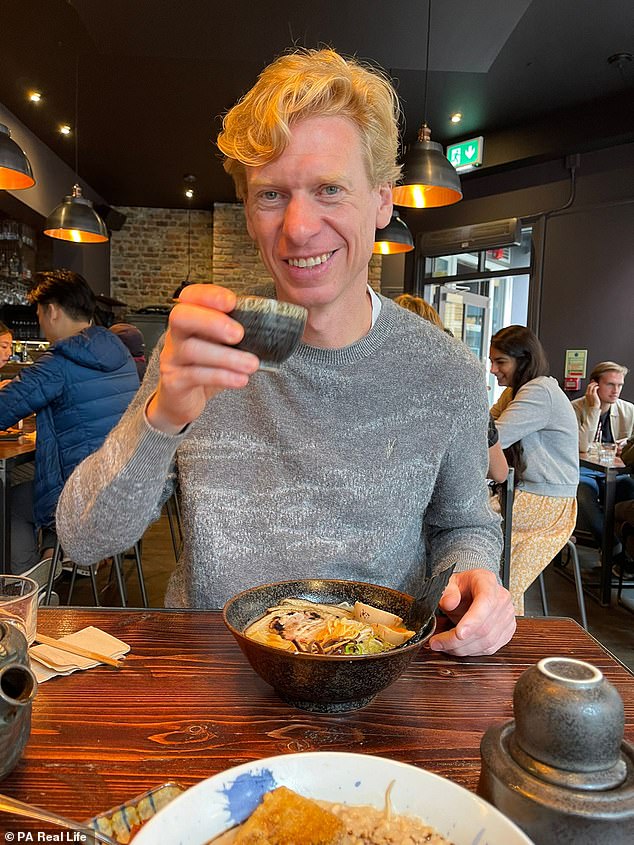 In his day job, Gavin also works with food – advising organisations on how food production can become more sustainable.

But he is not an expert on food safety and admitted some of his 54K followers on TikTok are worried about him, saying, ‘I get a lot of messages from people asking me if I’m still alive, if I don’t post for a day.’

On its website the Food Standards Agency (FSA) explains that a best before date is ‘about quality and not safety’.

A use-by date, however, is ‘about safety’ and they advise not to eat, cook or freeze any foods past the use-by date.

The FSA’s head of Foodborne Disease, Narriman Looch, said, ‘Never eat food after the use-by date, even if it looks and smells ok, as it could make you very ill.’

But Gavin is undeterred.

His first experiment in February 2022 involved four eggs, and has become a hit on TikTok.

He said, ‘I had known for many years that eggs last way longer than their best before date. It is something I found out about 10 years ago.

‘To my mind, eggs are a food people are a little bit scared of. I don’t think anyone wants to eat eggs that are off.’ 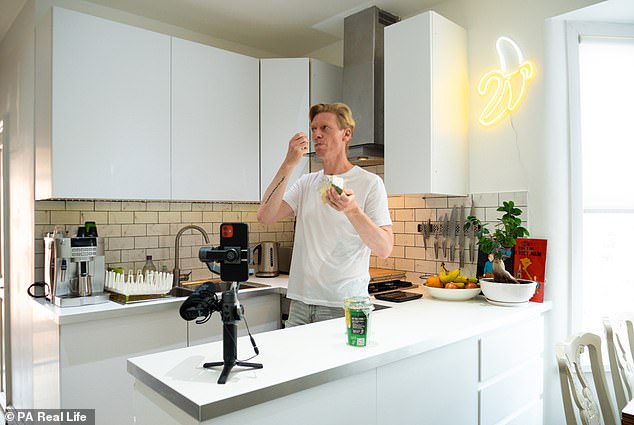 Gavin, pictured filming for this TikTok channel, says he ‘enjoys’ the challenges, using them to highlight the serious issue of food waste 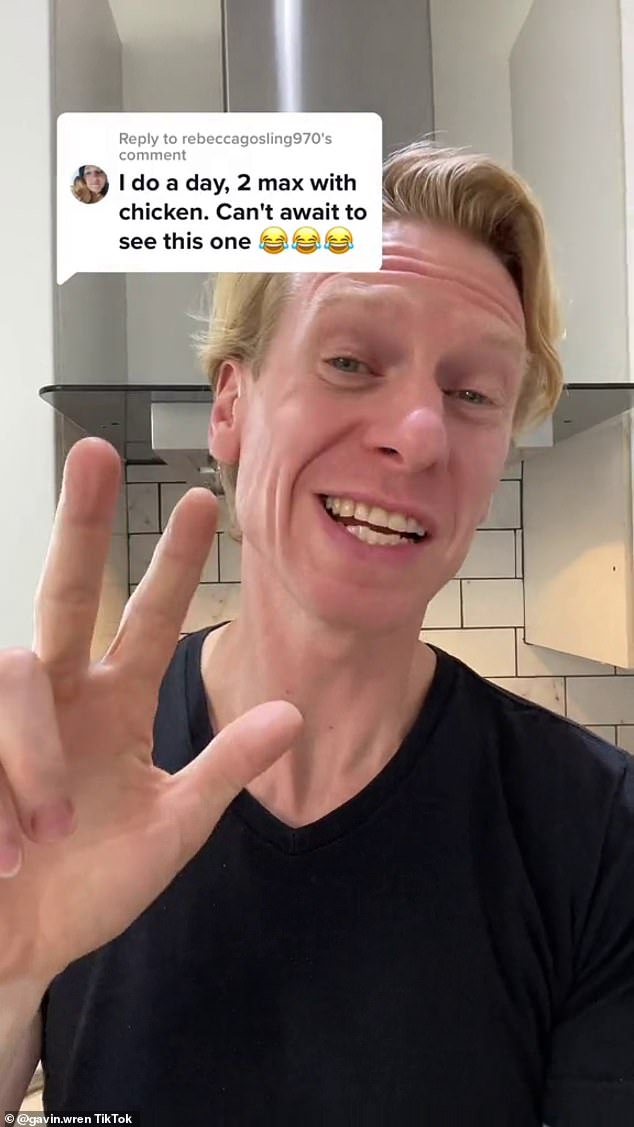 His TikTok followers, he said, ‘became really invested in the journey of these eggs’, watching as he repeatedly placed two of them, jokingly named Oswald and Olivia, in water after their best before date to see when they would float – which would indicate that they were rotten.

By May 12, the eggs were 73 days beyond their best before date and Olivia and Oswald had started floating, but one of the spare eggs he had kept in the fridge did not float as much and was still beneath the water’s surface.

Gavin said, ‘I opened them to check, and the one of the floating eggs had turned into green slime but it didn’t smell, funnily enough.’

But after cracking open the spare egg that was not fully floating and sniffing it, he decided it was ‘perfectly fine’.

‘I fried it and it was delicious,’ he added.

When it came to out-of-date hummus, Gavin got worried once it reached 14 days past its use-by date, and sent samples away for testing in a lab, though he continued to taste it for another three days.

He said, ‘I connected with a microbiologist who did some testing on a sample I sent.

‘She found some bacteria and she advised me not to eat it.’

He followed her advice and stopped but, none-the-less, he doesn’t feel the hummus growing bacteria defeated his cause.

‘I ate it every single day for a fortnight before that and felt fine,’ he added. 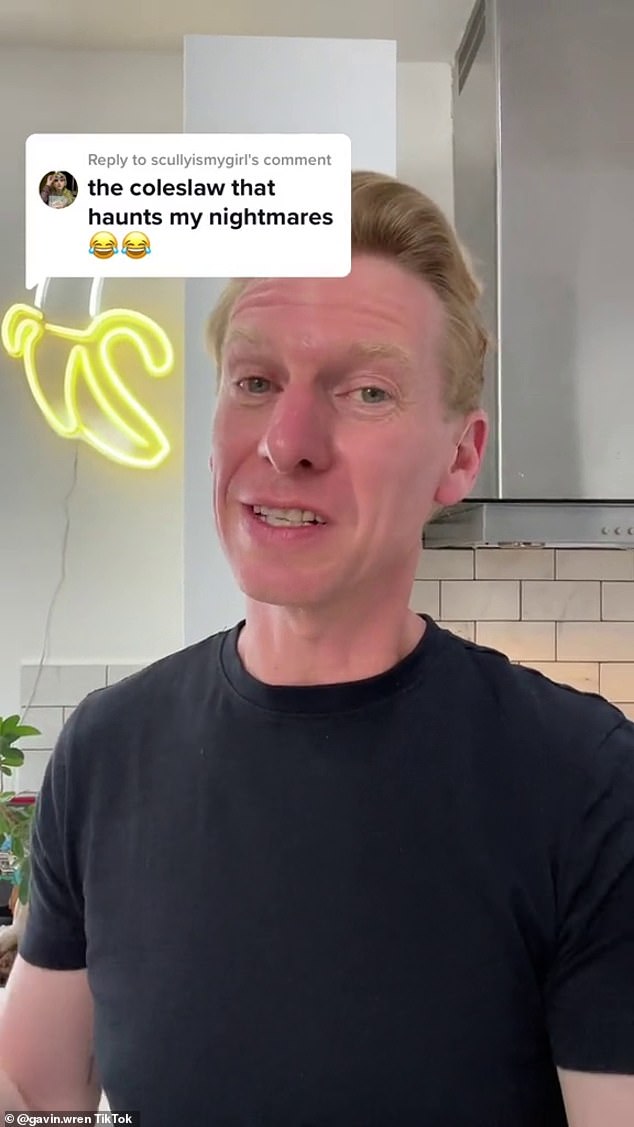 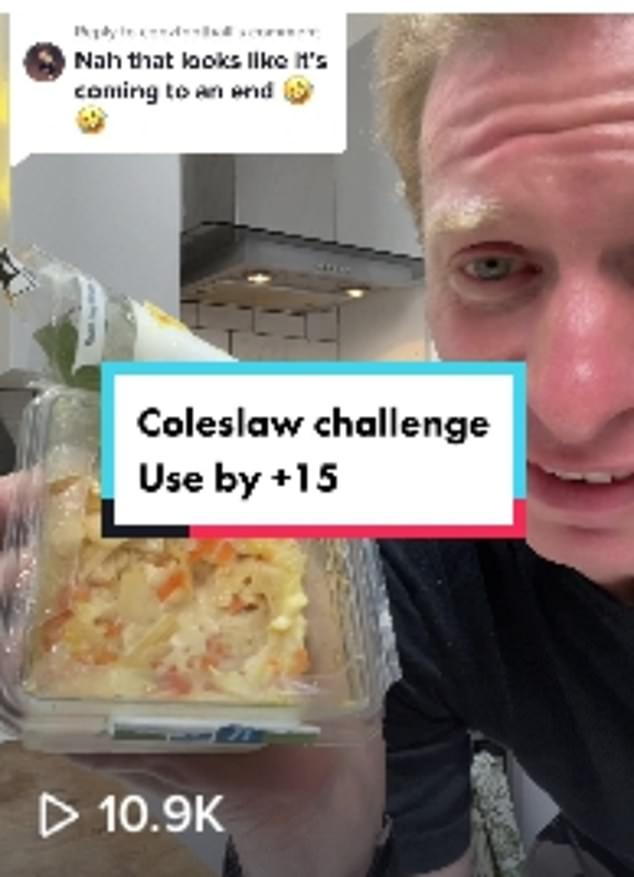 The experiments – which began in 2020 – were not how Gavin started out on TikTok, however.

With five years’ experience as a food writer and a Master’s in Food Policy which he completed in 2018 at the City University of London, he intended to tell people where food came from when he began posting as @gavin.wren.

He said, ‘I started posting videos in early 2020, and I was just messing around really.

‘I was just trying to help people learn where their food was coming from and educate people about food.’

But his out of date food challenges have seen his following double in the past three months alone.

While Gavin is not advocating for people to risk their health eating food that is past its best before or use-by date, he is urging people to use their senses and look at and smell their food before they throw it away.