Last year was not the best in which to have your first novel published. A few days before Pip Williams’ The Dictionary of Lost Words was launched, Australia went into lockdown. So no promotional events, no appearances on television, no bookshops. Possibly even no sales.

Fast forward a year and her historical novel set around the gestation of The Oxford English Dictionary in the years leading up to World War I has sold more than 120,000 copies and sits in the national bestseller lists. “The book industry came to my rescue,” she says.

Now it has been named book of the year and best debut novel in the independent bookshops’ Indie Book Awards. Fortunately, Williams has plenty of words and says she is overwhelmed by the success of the book, which will be published in Britain and the US next month. Other winners included Craig Silvey’s Honeybee (best novel) and Julia Baird’s Phosphoresence (best non-fiction). 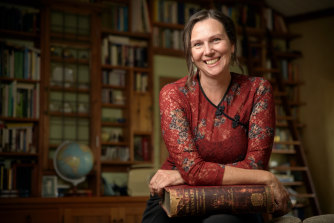 Pip Williams with her first edition of the first volume of The Oxford English Dictionary. Her debut novel was named book of the year by Australia’s independent booksellers.Credit:Ben Searcy

The Dictionary of Lost Words tells the story of Esme, whose father works on the OED. One day young Esme finds a paper slip on which the word “bondmaid” is defined; it has been dropped by one of the men compiling the dictionary. Gradually she builds a collection of words that have a particular meaning for women but are not being included in the dictionary. And that’s just the start of a novel that includes the suffragette movement and the war.

The review of the novel in The Age and Herald said “Pip Williams combines the storytelling scale and intimate detail of a 19th-century novel with the sensibility of now – and a cast of richly realised characters and relationships that are a pleasure to spend time with. And it has a rare quality that is, perhaps, especially valuable in this historical moment: it is deeply, intrinsically kind.”

Williams was prompted to think about the gendered nature of words when she read Simon Winchester’s The Surgeon of Crowthorne, about the relationship between the OED’s first editor, James Murray, and one of his contributors, William Minor, a former American army surgeon incarcerated in the Broadmoor asylum in southern England. 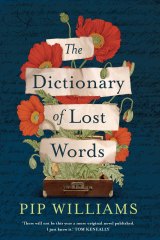 “I came across this little anecdote about a word missing from the first volume,” she says. “Nobody knows how it went missing and I thought that was my way into the world. I wanted to find out do words mean different things to men and women and if they do, does it matter that the dictionary was developed by men. My way of doing that was to put a girl in that context and allow her to grow up in that world and see how she interacted with the words and how the words interacted with her.”

Given that the dictionary was being assembled by men and relied on definitions that had been written down, the chances are the vast majority of those were written by men.

“I have a social science background and was a researcher for years. I kept coming back to this idea that the whole process was flawed because in terms of documenting the entire English language it had to have been a gendered exercise,” she says. “I wonder if any words have just disappeared from our language simply because they were never written down because they were spoken by women or working-class people in the birthing room.”

Williams has always wanted to write creatively and had her first work published when she was 15. “It was very imaginatively titled Fifteen. It was all about being 15. And Dolly magazine published it, which was thrilling. It was the beginning and end of my brilliant career for the next 30 years.“

As a social scientist she was co-author of Time Bomb: Work, Rest and Play in Australia Today. But academia lost its appeal and she and her partner, Shannon, took their two sons to Italy to work on organic farms with a view to deciding how they wanted to live their own lives in the Adelaide Hills. Out of that emerged her memoir, One Italian Summer.

She had always dreamt of writing fiction, but “I was dyslexic, so if teachers ever suggested anything to do with reading or writing it was remedial classes, not to pursue it as a career”. So if Esme is ambivalent about the dictionary in the novel, the same applied to Williams in reality. She has a “love-hate” relationship with dictionaries.

“People were constantly telling me to pick one up and look up the words that I was spelling incorrectly, which of course you can’t do if you can’t spell the word – the dictionary doesn’t help. But sometimes when something is a challenge for you it becomes a curiosity and a passion just because you are interested in it. I’ve always been interested in words because I’ve always had trouble with them. But ironically they have also been the way I express myself best.“

And while she’s not a collector of dictionaries, she does have one special one. Her partner gave her a first edition of the first volume of the OED. “It’s the one that ‘bondmaid’ was left out of.”