Q My lemon tree hasn’t flowered or fruited for two years, despite having the correct plant food each spring. Could you advise? 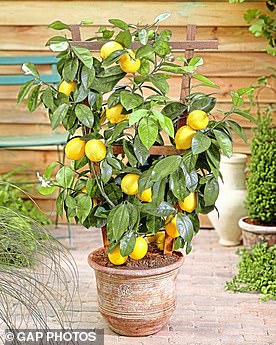 A Plant food won’t help if conditions aren’t right. Lemons need lots of light from April to September to flower.

They also need a good soak once a week or so in summer, drying completely between watering, and should be left almost totally dry in winter.

They like high humidity, so exposure to wind will dry them out too much. Give a high potash feed like liquid seaweed weekly from April-September.

Do not feed in winter and place them somewhere frost-free but cool for at least a couple of months.

Q Every year I try to grow fennel but it bolts and never produces a bulb. I’ve tried different varieties, and sown direct in the soil and in the greenhouse. 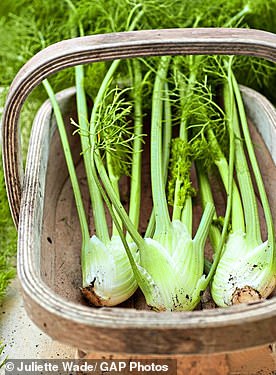 A Fennel is tricky to get right but the secret is to give it a steady, plentiful supply of water, feed, light and heat.

If it gets dry or too hot or too cold it’ll bolt. I sow mine in plugs in June and then transplant in July ready for harvest in September and October.

But this year most of mine have bolted too.

Mahonias are not glamorous, and never the star of a garden, but they’re superb for lifting winter gloom with their blazing yellow flowers, which can smell as good as lily of the valley and will brighten dark, dry areas where little else will grow.

When I was growing up in Hampshire they grew in the deep shade of the house and were, to be honest, not much-loved.

I did not consider planting any mahonias in my first London garden, but when I moved to the country in the 1980s, we inherited a dozen large shrubs, planted between huge redwoods, which lit the winter like gentle, fragrant lamps.

A number of mahonias will start to flower in late autumn and the weeks leading up to Christmas but ‘Winter Sun’ is my favourite – it is not too intimidatingly big, and fairly upright so it fits into a limited space, with fabulous butter yellow flowers and a delicious fragrance. If that were not enough, it grows very happily in dry shade, but also thrives in full sun.

The flowers are followed by striking black berries, which are edible when stewed.

It is hardy down to about -15°C and prefers reasonably well-drained soil.

It can be kept to size by pruning straight after flowering, and will flower on the previous year’s shoots.

Mahonias get their name from an Irishman, Bernard McMahon, who emigrated to Philadelphia in the 1790s and set up a nursery that became a famous horticultural meeting place.

The first to flower is Mahonia x media ‘Lionel Fortescue’, which will draw all the bees to its upright lemon flowers.

M. x media ‘Charity’ is probably the best-known mahonia and will grow to a substantial (and very prickly) shrub, up to 4m high and wide given space and time.

The primrose-yellow flowers are strongly scented of lily of the valley.

M. x media is the result of a cross between M. lomariifolia and M. japonica.

The latter is very hardy and tolerates deep shade although it can become lanky and gaunt in old age and needs pruning to hold a good shape.

But it’s a robust plant and has wonderfully fragrant flowers.

M. lomariifolia comes from Burma and Yunnan in China, where it can reach 12m tall.

Its flowers are carried in a tuft and it has really good foliage, but it’s much more tender than M. japonica, being not hardy below -10°C and unhappy in exposed spots.

One of my plant-hunting forebears, George Don, brought back M. napaulensis – which can also reach 12m – from Sikkim in India.

I suppose I ought to grow it out of family loyalty, but it is rather tender.

A better-known plant-hunter was David Douglas, who added more than 200 species to our gardens.

In 1824 he embarked on a plant-hunting expedition to the north-west coast of America, which involved an eight-and-a-half-month sea journey round Cape Horn.

Early on in his adventure-packed trip, he discovered M. aquifolium, or the Oregon grape. 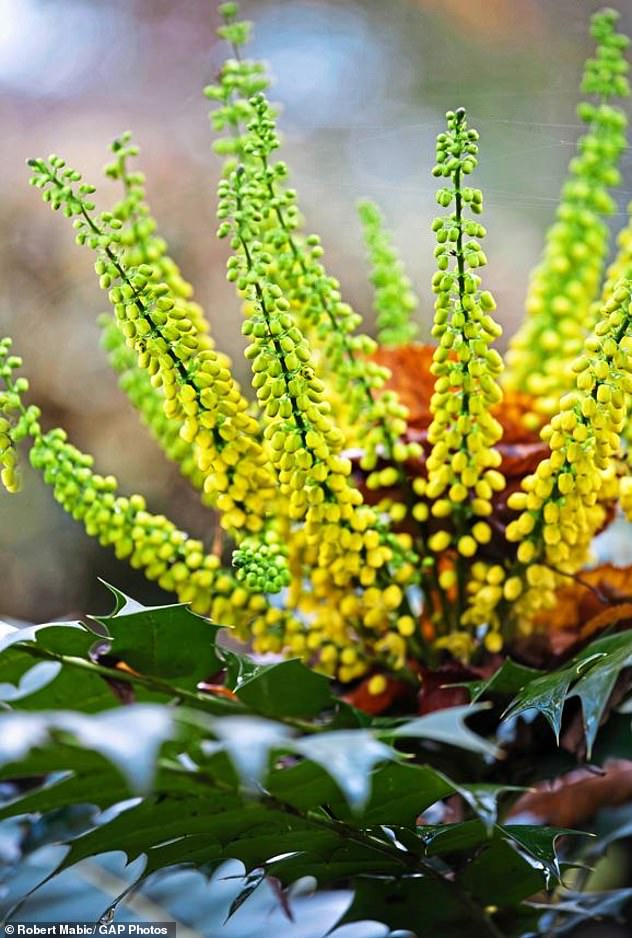 Pictured: Mahonia x media ‘Charity’. A number of mahonias will start to flower in late autumn and the weeks leading up to Christmas 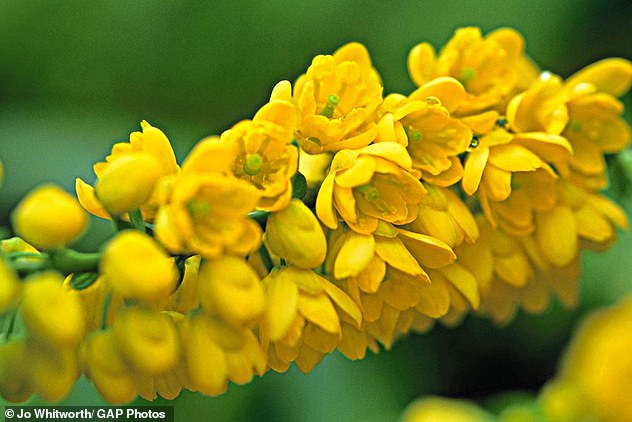 Pictured: ‘Winter Sun’. Monty Don says: ‘It is not too intimidatingly big, and fairly upright so it fits into a limited space, with fabulous butter yellow flowers and a delicious fragrance’

American mahonias are generally shorter, more spreading and do better in sunny sites with well-drained soil than the Asiatic ones, which like some shade and cope happily with heavy soil.

But don’t let this put you off attempting to grow any mahonia anywhere – most will adapt perfectly well to wherever you place them.

MONTY’S JOB OF THE WEEK

Now’s the time to plant tulips. Leaving them late into autumn – they can be planted any time until Christmas – means they go into cold soil, which reduces the risk of fungal problems.

Tulips thrive in sunny spots with very good drainage, so add grit if your soil is heavy and plant them at least 10cm deep.

If you’re planting into grass and the soil is heavy, put a handful of grit into each planting hole before dropping in the bulb. Finally, when buying tulips, remember that the bigger the bulb, the more chance it’ll have a good flower. 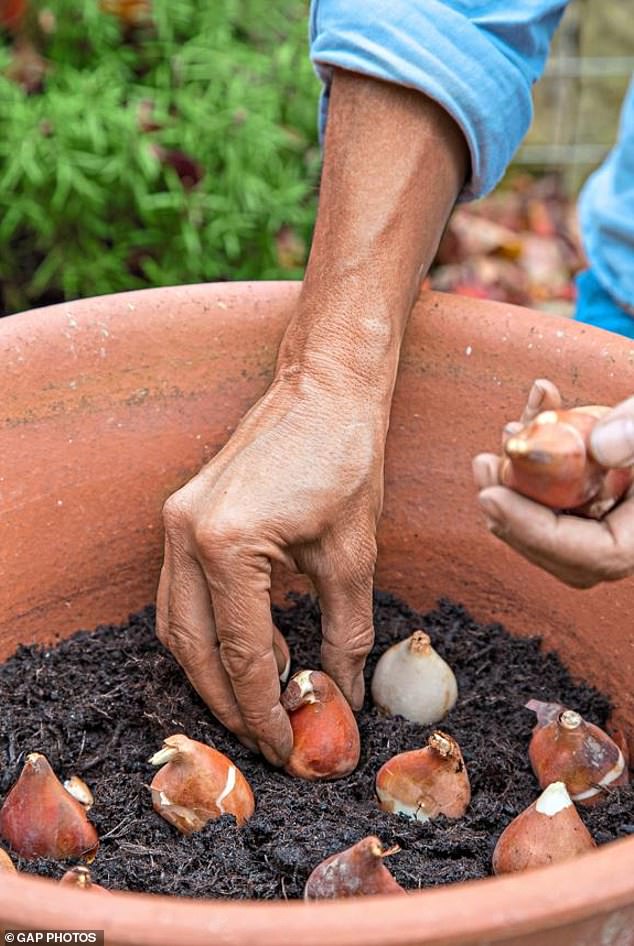 Tulips thrive in sunny spots with very good drainage, so add grit if your soil is heavy and plant them at least 10cm deep 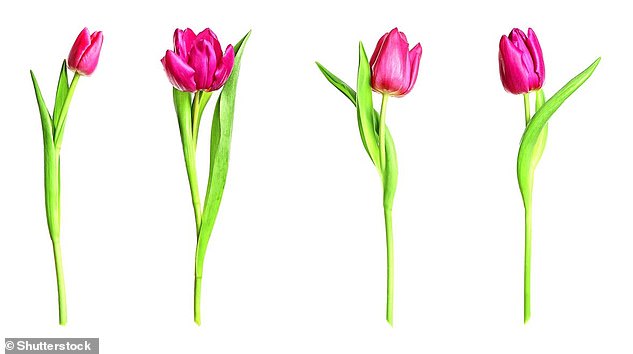 Now’s the time to plant tulips. Leaving them late into autumn – they can be planted any time until Christmas – means they go into cold soil, which reduces the risk of fungal problems