Leading Australian sports organisations have reacted defensively to a poll that shows 62 per cent of people want the multi-million dollar relationship between gambling companies and major codes banned.

Industry sources claimed that tens of millions of dollars were ploughed into sports sponsorship by betting agencies and another $280 million was spent annually on gambling advertising around matches and events, which paid for as many as 950 adverts a day across all platforms.

This advertising also creates lucrative sports rights for the major codes, with the AFL recently completing a $4.5 billion broadcast deal.

The NRL, which has a lucrative deal with Sportsbet, and the A-Leagues, which have a relationship with Neds, refused to comment while the AFL did not provide a statement at the time of publication. 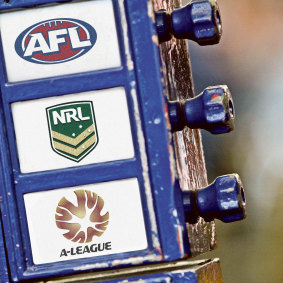 Gambling ads linked to sport number as many as 950 a day.Credit:Simon Bosch

Netball Australia does not have any sponsorships with gambling companies, although the sporting body considered it amid recent financial troubles.

An exclusive poll for the Herald and The Age highlights the growing debate over the money pouring into major sports from sectors fiercely opposed by critics, who say the result “normalises” industries that harm the environment or the community.

The survey, conducted for this masthead by Resolve Strategic, revealed that only 25 per cent of respondents believed gambling and betting companies should be allowed to sponsor sport, while 62 per cent prefer a ban and 14 per cent are undecided.

The Reverend Tim Costello, who is an ambassador for End Gambling Ads, said most sports fans “feel a collective vomit” about the amount of betting advertising around sport.

“It’s a tsunami of saturation and most people are over it,” he said. “We saw a big shift with community attitudes towards smoking when tobacco advertising was banned.

A Cricket Australia spokesman claimed that the organising body adhered to all government guidelines.

“When it comes to betting sponsorship Cricket Australia goes further in that we have adopted a number of measures to address possible public concerns around the proliferation of gambling advertising and particularly any potential impact on children,” the spokesman said.

“These include not having any gambling partners attached to the Big Bash Leagues.”

“We are confident our partnership with Bet365 complies with regulations around advertising and betting, and we are committed to advocating for responsible betting.”

Gaming giant Tabcorp appealed to the federal government last year to impose tougher restrictions on betting advertising during prime-time viewing. Tabcorp is the principal sponsor for the two biggest racing events of the year – the Melbourne Cup and The Everest – but has reduced its sponsorship of other sports in recent years.

Tabcorp chief executive Adam Rytenskild said children and families should be able to watch live sport on television “without being bombarded by gambling advertising”.

“TAB does not advertise as much as our competitors, and we will continue to work closely with governments on the implementation of tougher restrictions moving forward,” Rytenskild said.

At Tabcorp’s annual general meeting last week, Chairman Bruce Akhurst said the group’s advertising regulation advocacy would advantage shareholders and the group would be participating in the government’s online gambling inquiry into the matter.

Responsible Wagering Australia – the independent body which represents the bulk of bookmakers in Australia including Sportsbet, Pointsbet and Entain – did not respond to a request for comment.

News, results and expert analysis from the weekend of sport sent every Monday. Sign up for our Sport newsletter.