Switching to electric delivery trucks rather than diesel-powered ones could mean cutting noise, congestion and pollution on suburban and city streets as freight curfews are lifted, with the trucking industry backing an energy switch that it says will save companies money. 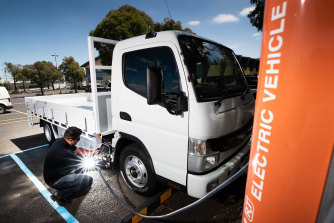 The Australian Trucking Association (ATA) has produced a report with the Electric Vehicle Council advocating a switch to electric vehicles to reduce health impacts and save the industry money.

“It costs about $117 to fuel a diesel truck for 300 kilometres, but just $18 for an electric truck,” ATA chairman David Smith said.

“If Australia gets left behind on the transition to electric and zero emission trucks, we risk our supply chains and exporters getting stuck with high, globally uncompetitive per kilometre freight costs.”

Experts attribute more than 1500 deaths a year to respiratory illnesses from air pollution due to emissions from cars and trucks. Road freight in capital cities and urban centres creates up to 40 per cent of total road freight.

Daimler manufactures Fuso electric trucks, and chief executive of the Australian branch of the company Daniel Whitehead said it was “investing massively in zero emissions technology for our Fuso, Freightliner and Mercedes-Benz brands”.

“We believe battery electric and hydrogen fuel cell solutions have a huge role to play in Australia’s freight future and will deliver major benefits to our customers and the community,” Mr Whitehead said.

The ATA’s report, Electric trucks: Keeping shelves stocked in a net zero world, said there are vehicle models available today that could be deployed into existing urban fleet operations. The association is aiming for 100 per cent of new truck sales to be electric by 2040.

It calls for the government to support the industry financially, and to change vehicle standards so new models designed for major markets in Europe and North America are deemed roadworthy in Australia.

Volvo Group is planning to build electric trucks in Brisbane by 2025 and Australia vice president Paul Illmer said traffic and health benefits were key market opportunities for the company.

“Electromobility has the potential to transform the way our cities operate,” Mr Illmer said.

“You can make deliveries at night without disturbing local residents, which could also reduce traffic congestion during the day. The impact of diesel fumes on the general public is also reduced, making our cities healthier places to be.”

Energy and Emissions Reduction Minister Angus Taylor has ruled out placing bans on petrol and diesel vehicles and has said imposing sales quotas on vehicle types was similar to a carbon tax.

A spokesperson for Mr Taylor said the government was enabling consumer choice for consumers and the transport sector.

“Our policy will enable heavy-duty fleet operators to choose the type of technology best for their business, without raising the costs of vehicles or imposing sneaky carbon taxes,” the spokesperson said.

“We understand the importance of the trucking sector in keeping our economy moving. That is why heavy duty and long-distance vehicles are one of the four priority areas under the expanded $250 million Future Fuels Fund.”

Electric Vehicle Council chief Behyad Jafari said all Australian governments were committed to reaching net zero emissions and the transport sector must be decarbonised to achieve that.

“In partnership with our customers and suppliers, we are investing heavily in the trial of electric vehicles charged with renewable energy in the pursuit of carbon-neutral transport,” Mr Mazurek said. “By March this year, Linfox will have six electric trucks on the streets of Melbourne and Sydney.“

For a guide to the environment, what’s happening to it, what’s being done about it and what it means for the future, sign up to our fortnightly Clear Air newsletter here.