Man builds a garden office shed himself for £6,000

A DIY novice has revealed how he replaced his run-down shed with a luxury home office he built from scratch.

He saved money by buying material second hand and doing most of the work himself, despite his limited experience.

Jonathan was able to complete the project for £6,000, compared to the £15,000-£20,000 he estimates professionals would have charged for similar work. 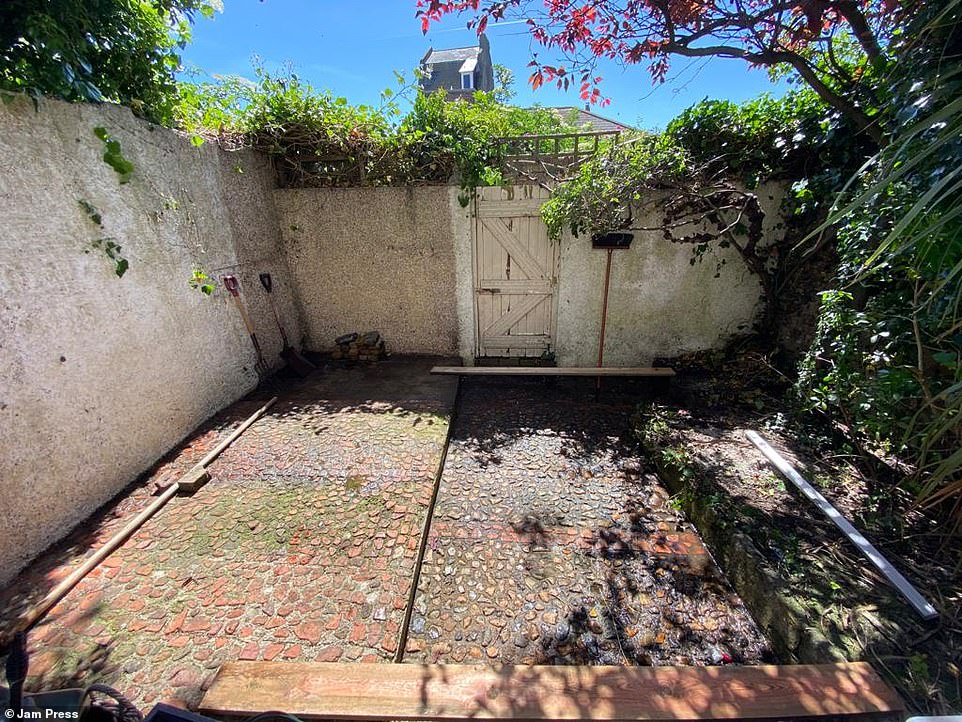 Jonathan Bradley, 57, from Kent, who runs online business seminars, spent three months constructing the impressive back garden structure, which boasts built-in shelving and sleek glass doors. Before starting the project, he had to tear down his original shed, which was situated in this corner of his back garden (pictured after the original shed was removed) 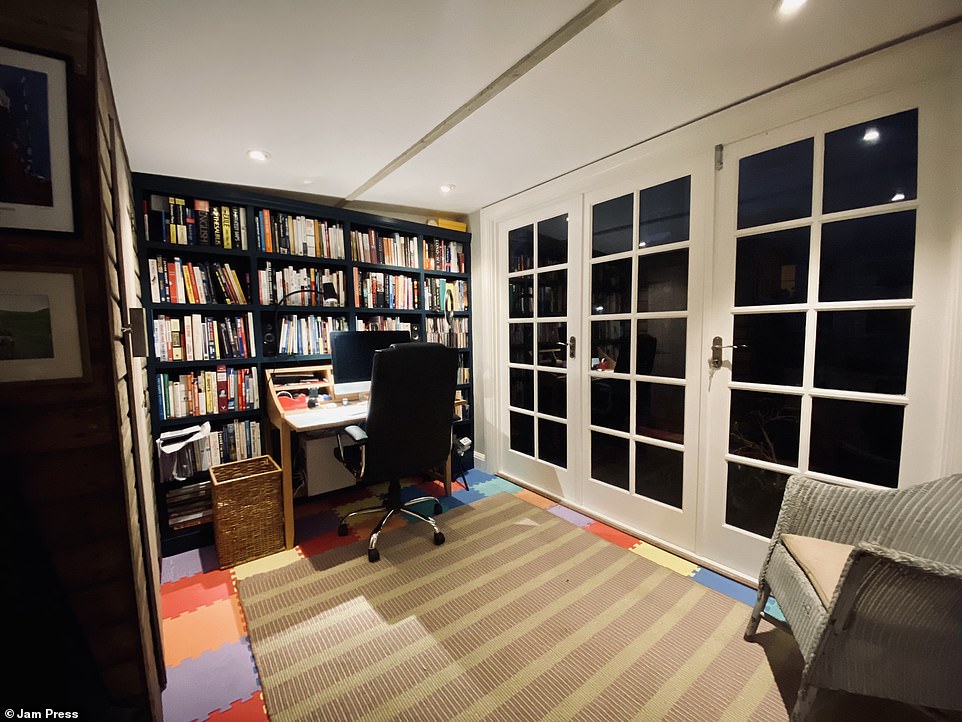 The finished result is stunning, with insulation in the walls, floor and ceiling making the garden office cosy even in winter. The entrepreneur was able to design the space to fit his needs and added in a built-in bookcase and separate seating area 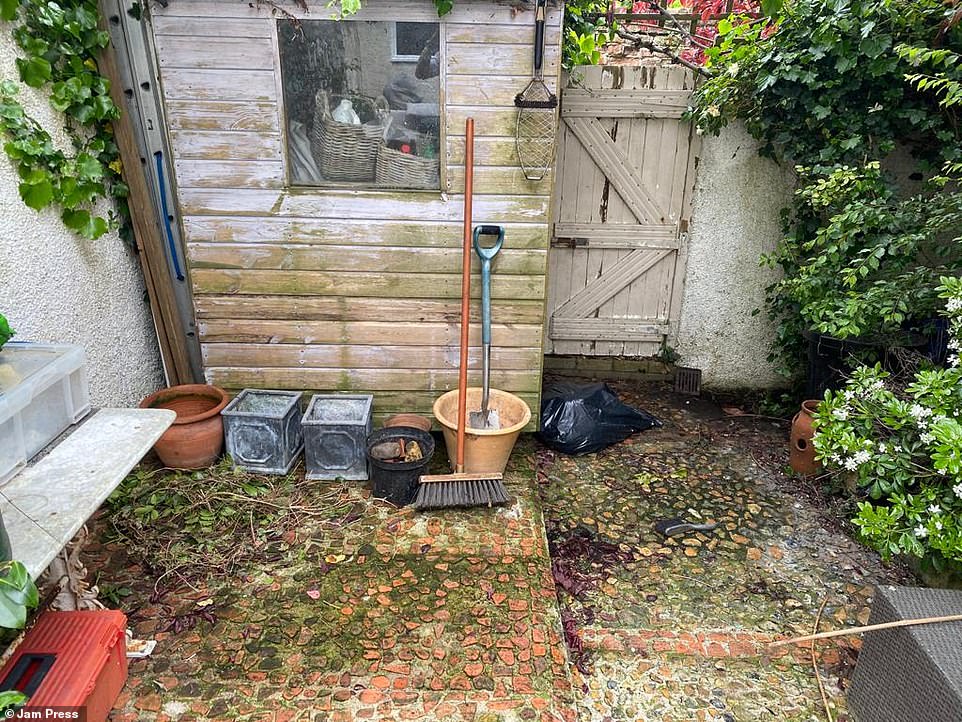 Before, there was a little shed at the back of Jonathan’s garden, pictured, but he removed it and cleaned the surface in order to build his own, larger shed. Jonathan explained the original structure (above) wasn’t ‘big enough to swing a cat in’

‘Up until lockdown, my business was thriving,’ Jonathan explained. ‘I was running workshops for business leaders across the world. Suddenly my business model wasn’t going to work and it was a bit of a shock.’

‘I had clients who were happy to do webinars and things online but trying to work with dogs barking, teenagers and things like the postman at the door was difficult.

‘I was out in the garden looking at the knackered old shed that you couldn’t swing a cat in and I knew that wasn’t going to work.

‘I started designing it on a piece of paper and knew that I couldn’t afford to get someone to come and build it, so just had to do it myself.’

Although the dad had some experience with basic DIY, he had never built something from scratch before or taken on a big project.

Jonathan started by creating a level area as the garden was at different heights. With limited tools, he turned to the kitchen for inspiration. 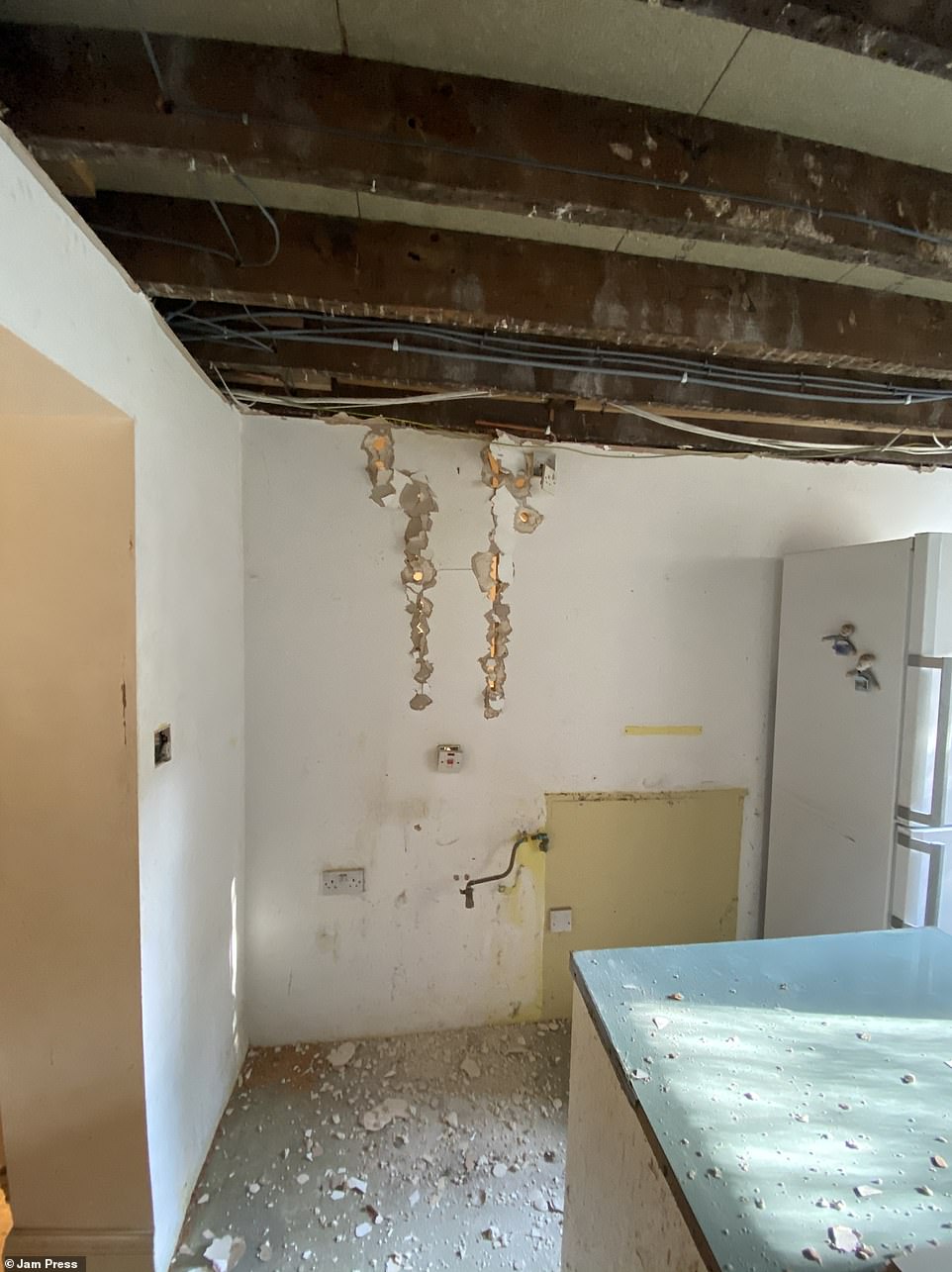 Jonathan saved money by buying material second hand and doing most of the work himself, including building up the walls (pictured) and fitting the floors and ceiling. He was able to complete the project for £6,000, compared to the £15,000-£20,000 he estimates professionals would have charged for similar work 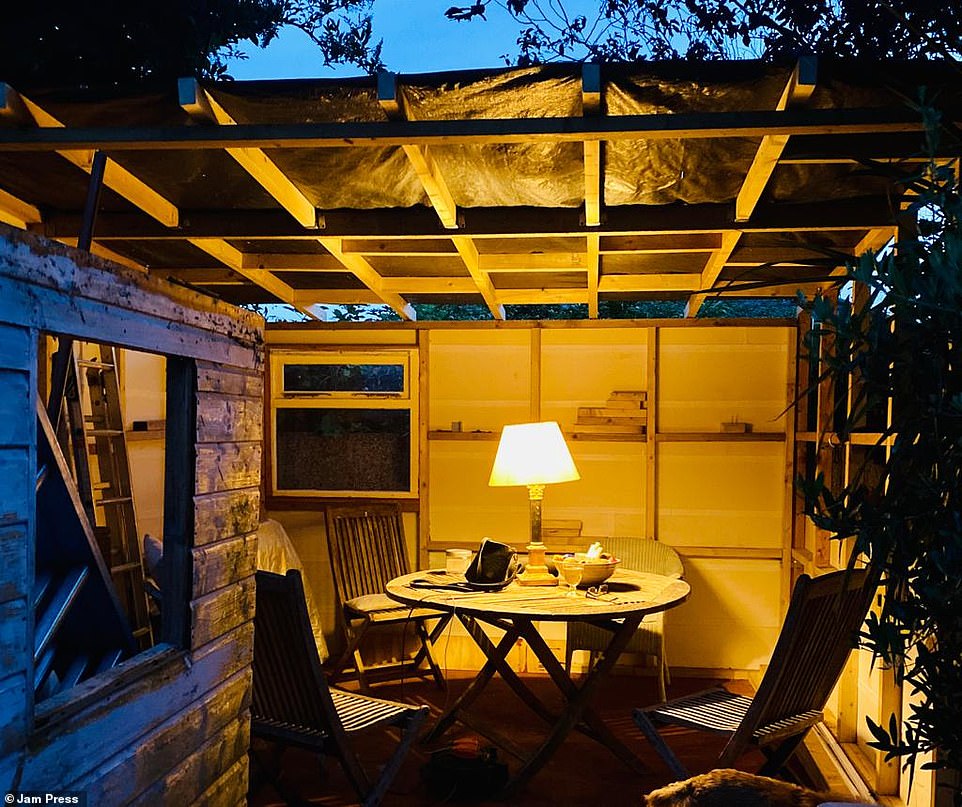 Doing the work himself meant the project was more time intensive than it would have otherwise been, with the work stretching out over several months. Pictured, an open-air seating area as the shed is slowly built 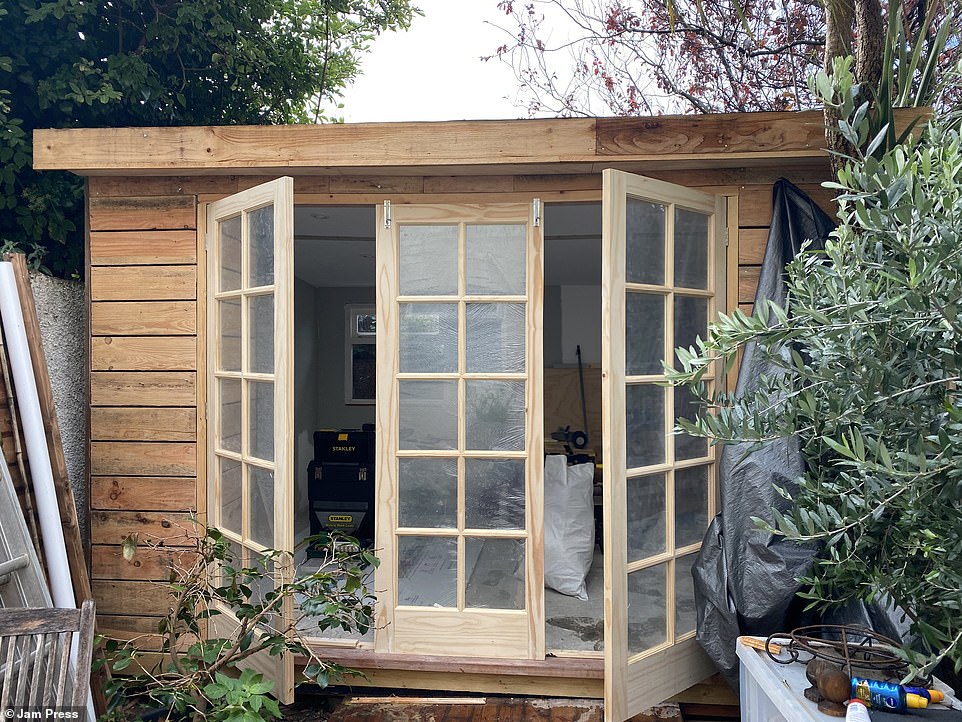 A key feature of the shed office are the impressive doors, which Jonathan found on Facebook Marketplace for less than what they would have cost in store 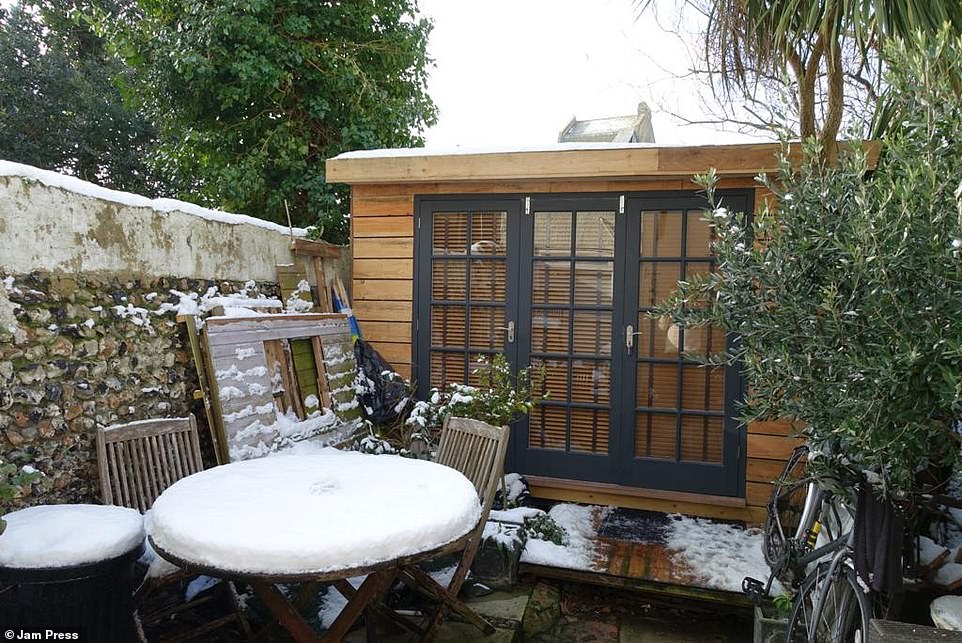 The shed covered in snow last winter after Jonathan completed it. The study built has survived the harsher weather of the cold months

He said: ‘I got some cake tins and filled them with concrete to build up the difference in height between each side. They were the springform ones where you can unclip the sides. Once I’d done that, I put joists in and then put a big chunk of ply on top for the floor.’

Although he had to buy new materials like plasterboard and insulation, Jonathan was determined to use as much recycled material as possible to keep costs low.

He said: ‘I found things like the doors and windows on Facebook Marketplace. The back window was one someone was throwing out and I got it for £20.’

A lot of the costs were down to lining the walls, floor and ceiling with thick insulation, which not only helps keep the shed warm, but acts as soundproofing for Jonathan to take calls and record podcasts and webinars. 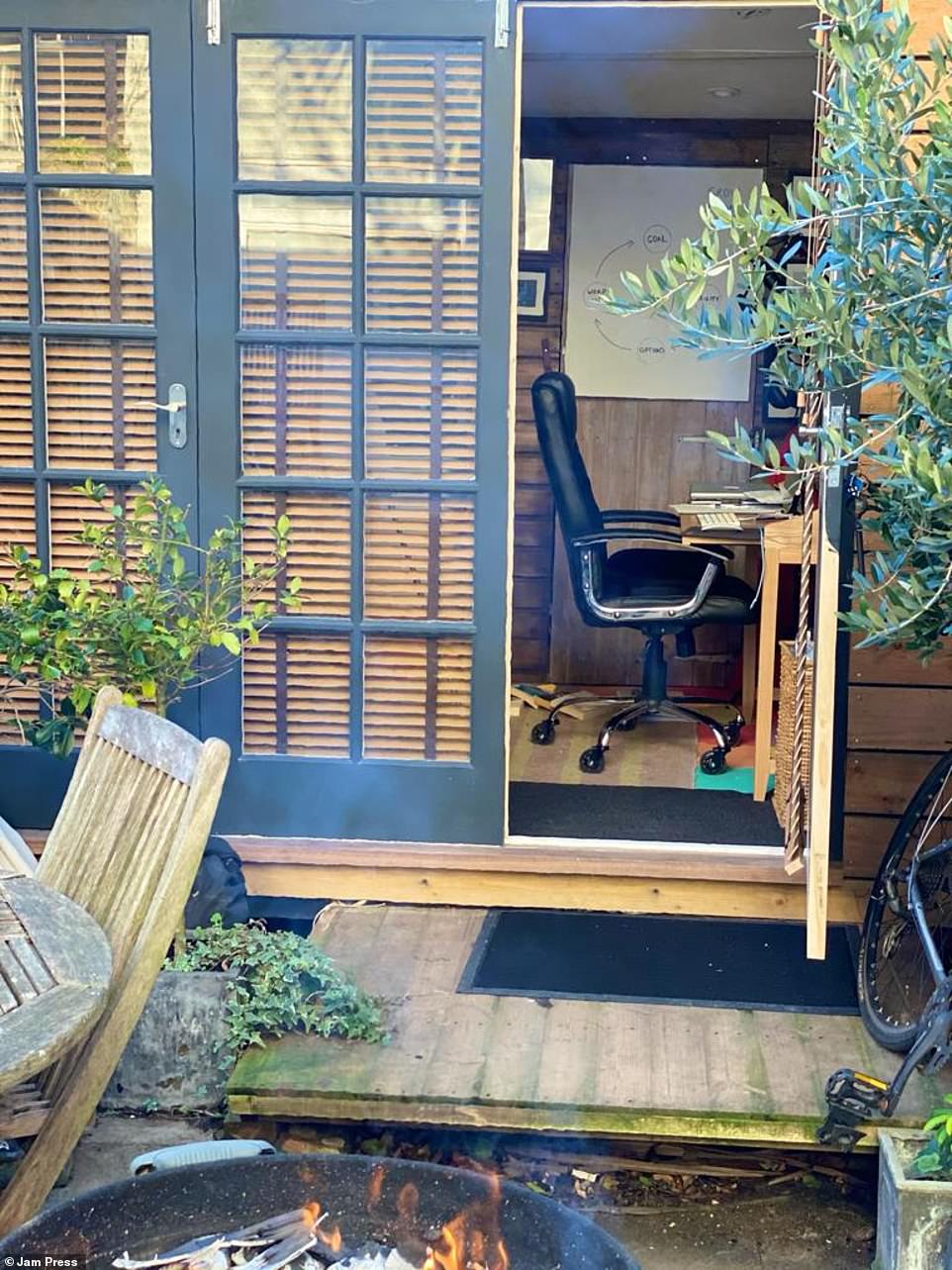 Even though Jonathan had limited know-how when it comes to DIY, he managed to make the shed cosy and gave it a luxury feel, pictured 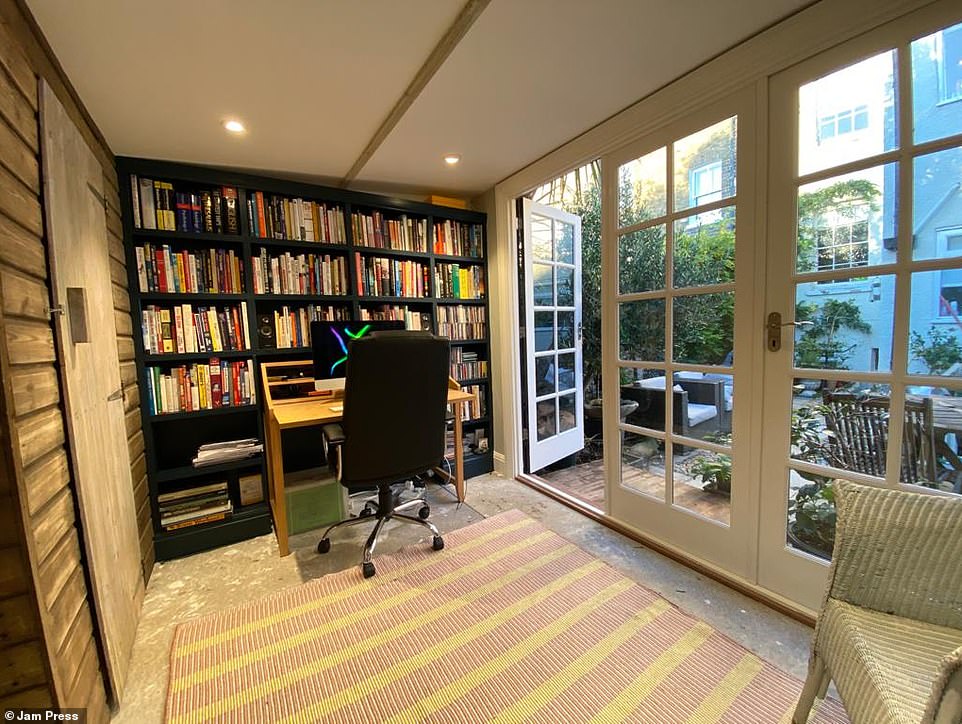 Jonathan can run his seminars without being interrupted now that he has his shed, pictured. Jonathan has moved on to doing a bit more DIY after finding out he enjoys using his hands

Once the insulation was in, he used timber to cover the whole structure.

He finished it off with a corrugated material on the roof, which he chose because it was easy to fit and has prevented any leaks.

The only work he didn’t do himself was the electrics, instead paying an electrician to run power from the house to the shed.

The whole project took three months as he did it between running his business.

Now, a year on from moving out to the shed, Jonathan says it has been a game-changer.

He said: ‘It’s fabulous. It’s a purpose-built, specifically designed area for me. 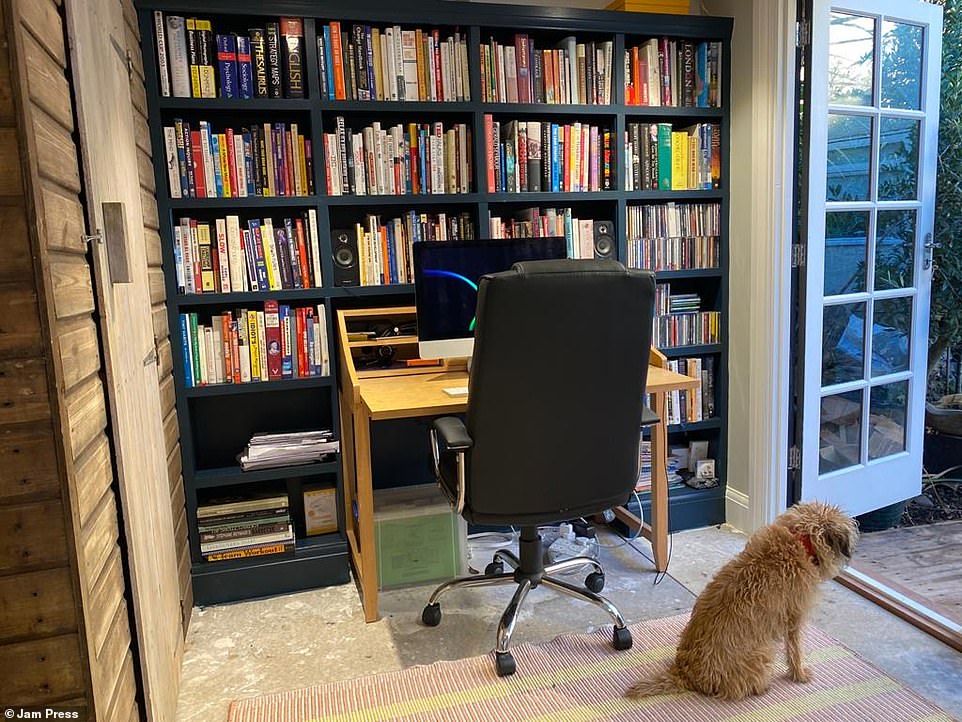 The family dog enjoying the shed. A year on from building the shed himself, Jonathan said he wouldn’t go back to working from the living-room for the world 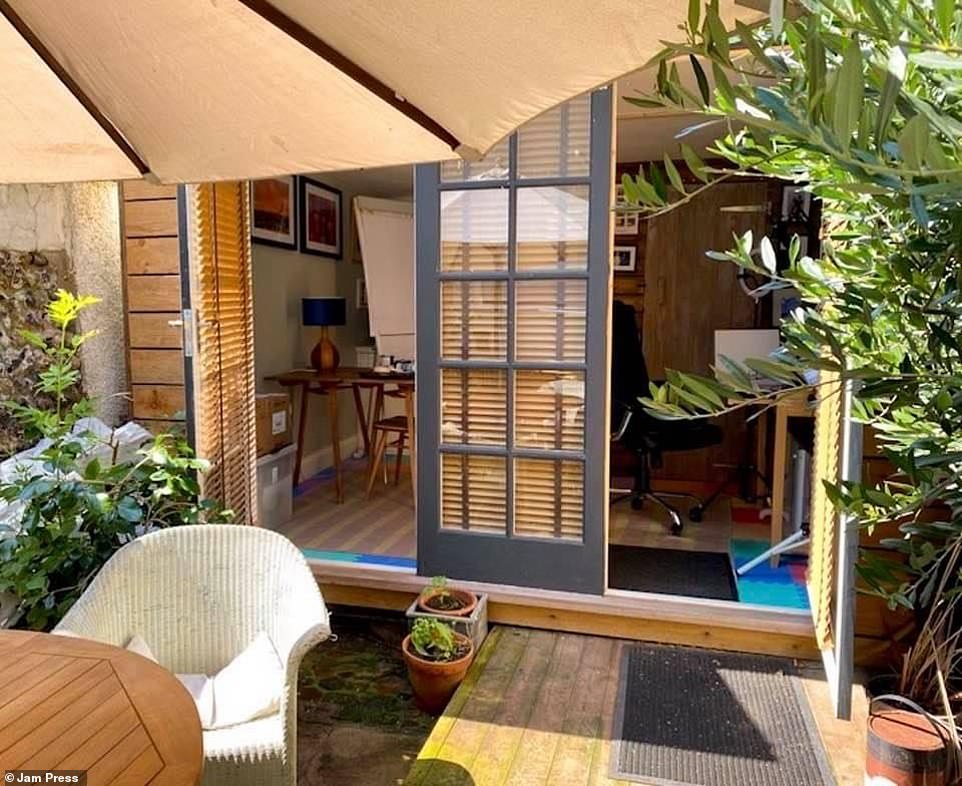 In the summer, Jonathan keeps the shed’s doors open. It is big enough to house a two desks, shelves and a board, perfect for his online presentations

‘I’ve got my flipcharts, perfect lighting, my two computers, and all my reference books and files.

‘I was able to build it around me in the way I wanted it. I am reaping the rewards from it and getting a lot more webinar business.

‘I have no hesitation in saying I wouldn’t go back to the way I worked before. Everything is conveniently around me and my commute takes a few minutes.’

The extra time and working in a place he finds inspiring also helped Jonathan co-write a book called The No Normal Leader, which will be released in March 2021.

He said: ‘I wasn’t ever going to write a book in the pre-Covid world.

‘I think this is the most creative space for me so I was able to really hunker down and really put a substantial part of that book together from this shed.’

It’s also inspired him to take on other projects and he is currently ripping out and fitting a new kitchen in his family home.

He added: ‘The shed gave me the confidence to do more. I’m now thinking about the garden and landscaping it. I realised how much I like working with my hands. I had no idea how much I would enjoy that until I did the shed.’

a, builds, garden, man, office, She
You may also like:

Why is the cryptocurrency market down today?