Man surprises his dying partner with a magical Disney-themed wedding

Man surprises his dying partner, 28, with a magical Disney-themed wedding in hospital days before her death from cancer

A heartbroken father surprised his dying wife days before her death with a dream Disney wedding at the hospital where she was receiving cancer treatment.

Alex proposed to his late wife in September 2022 when doctors said she only had a few weeks to live.

Her condition left her largely bed bound and meant she could not travel abroad to celebrate the big day.

With the help from Royal Marsden Hospital, the couple pulled off the most ‘magical’ ceremony and married his childhood sweetheart. 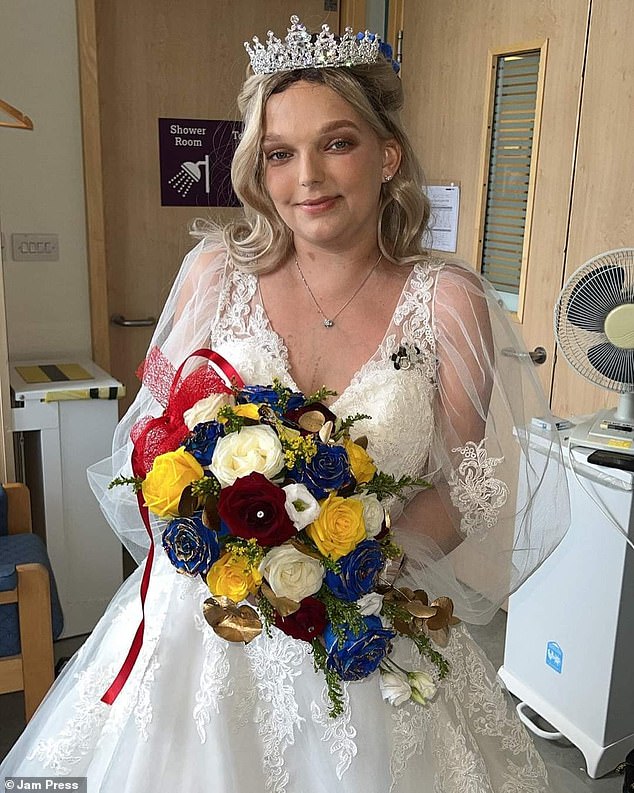 Kirsty Fielding (pictured), 28, from Catford, South London, died from cancer in October 2022 and left behind her husband Alex Fielding, 32 and their two-year-old son Thomas (Pictured: Kirsty on her wedding day) 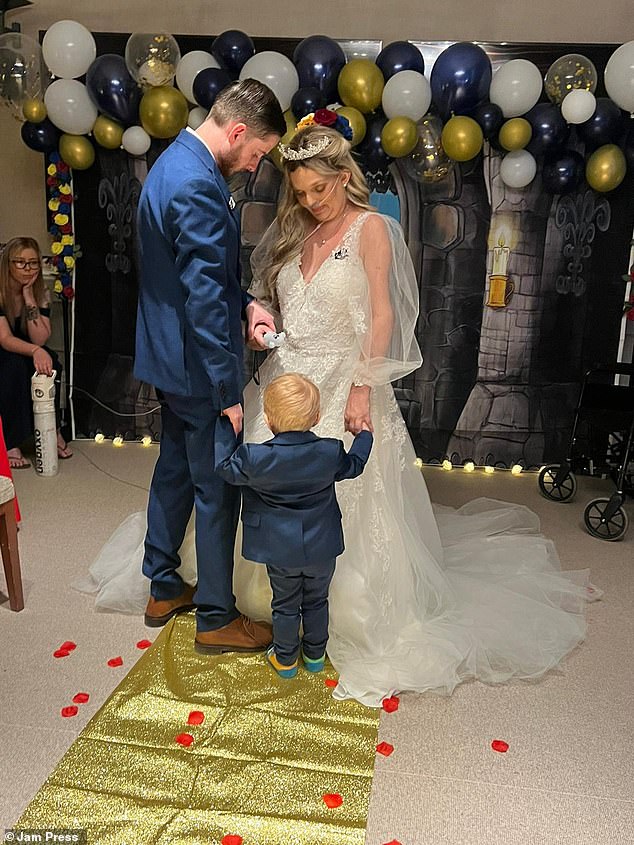 Alex (left) proposed to his late wife (right) in September 2022 when doctors said she had a few weeks to live (Pictured: Alex surprised his terminally-ill wife, Kirsty with their dream Disney wedding days before her death) 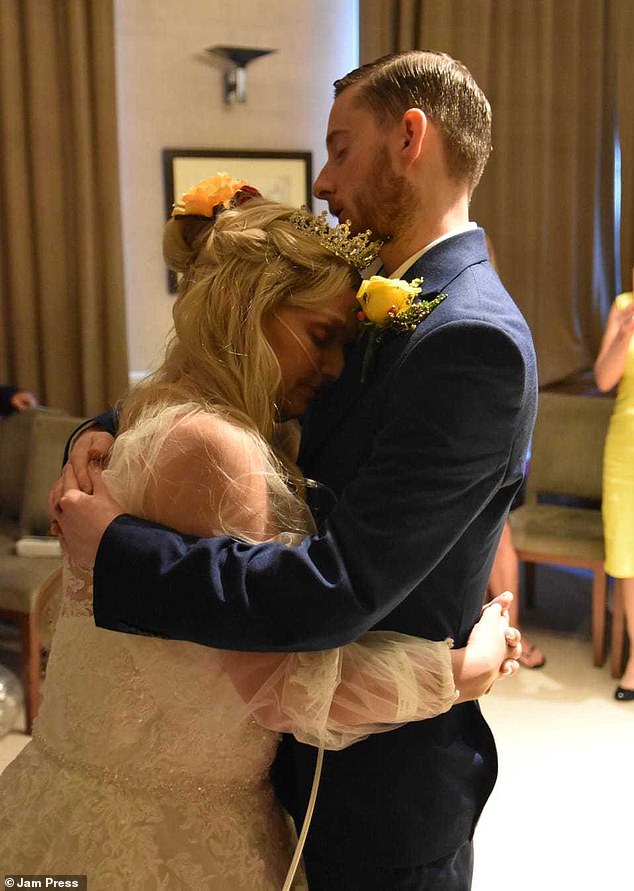 With the help from Royal Marsden Hospital, the couple (pictured) pulled off the most ‘magical’ ceremony and married his childhood sweetheart (Pictured: the bride and groom embracing) 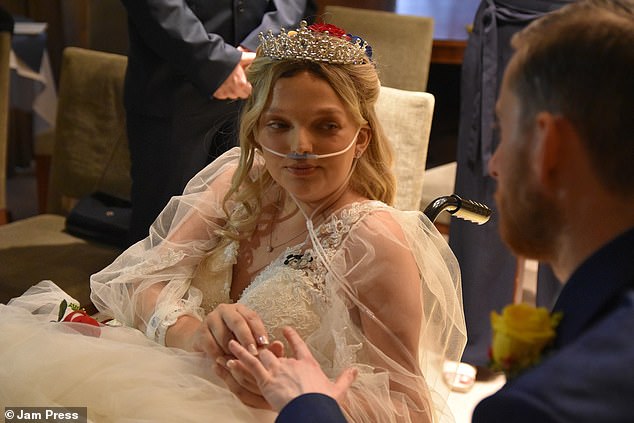 The father-of-one managed to persuade staff to host the ceremony in the room where Prince William uses when he visits (Pictured: the newly weds sat down next to one another on their wedding day)

The father-of-one managed to persuade staff to host the ceremony in the room which Prince William uses when he visits.

The widower told said: ‘I still don’t believe that any of it is real, it feels like it has been months without her.

‘The hardest thing is not being able to talk to her, she has been by my side every day and it has just been horrible. 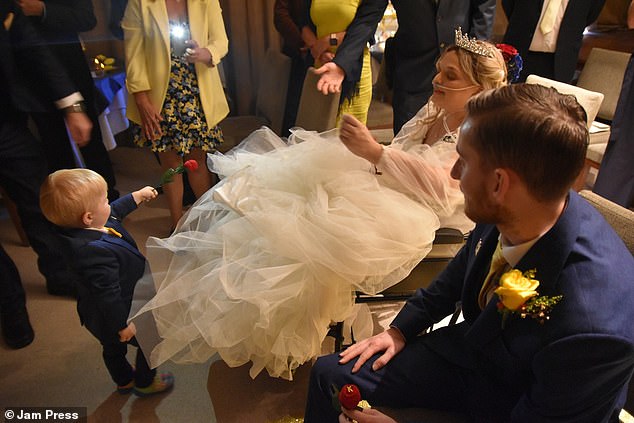 Alex told NeedToKnow.Online: ‘I still don’t believe that any of it is real, it feels like it has been months without her (Pictured: Kirsty’s dress was too heavy for her to walk down the aisle, so she had to be wheel-chaired in) 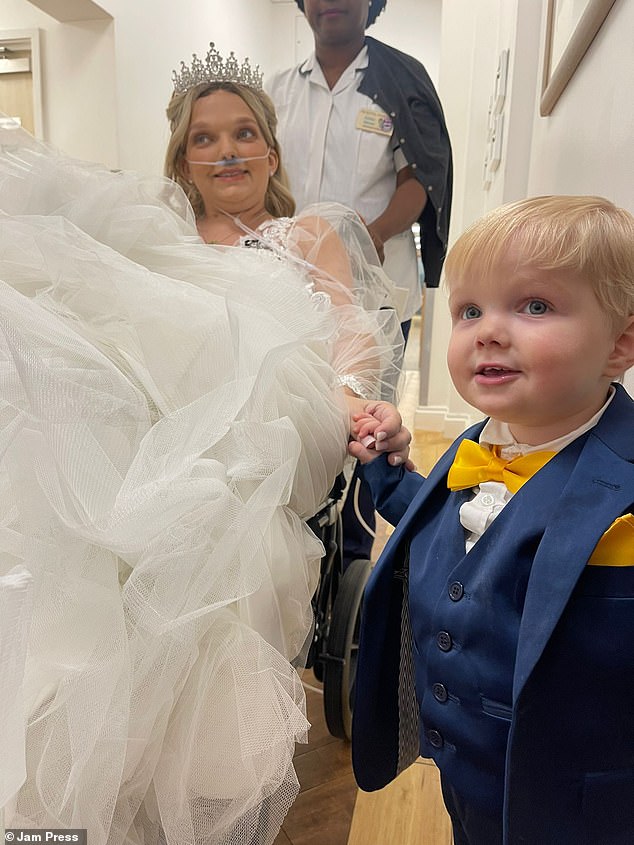 He said he hardest thing is not being able to talk to his late wife who ‘has been by my side every day’ (Pictured: Kirsty being wheel chaired in while holding her son Thomas’s hand 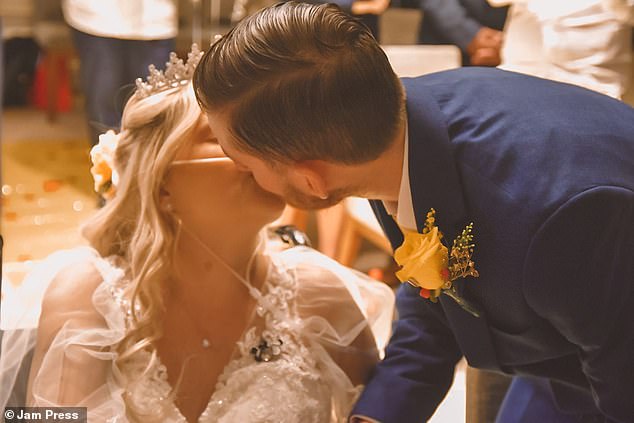 Alex said: ‘As soon as she got the diagnosis, Kirsty looked at me and started crying because she realized she won’t see Thomas grow up (Pictured: The bride and groom sharing a kiss)

‘As soon as she got the diagnosis, Kirsty looked at me and started crying because she realised she won’t see Thomas grow up.

‘I knew I had to be positive for her and told her we can fight it together. As we didn’t know how long we had left, we both knew we wanted to get married.

‘But towards the end, she became too sick, so I decided to give Kirsty one last wish, and that was to bring Disney to her. 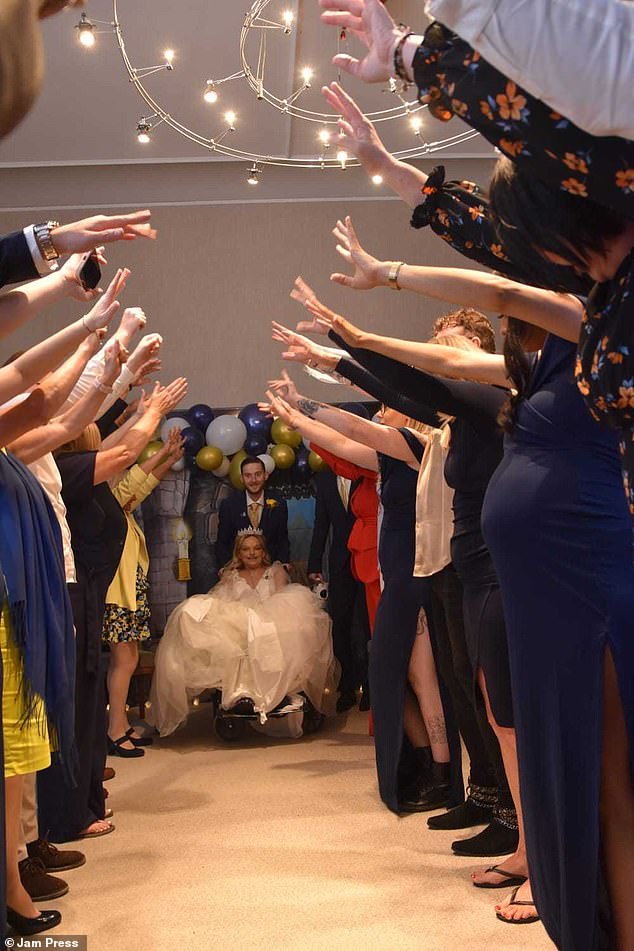 Alex wanted to remain positive and was desperate to get the ceremony arranged as soon as possible as the couple did not know how long Kirsty had left (Pictured: Kirsty being pushed down the aisle while guests stand side by side with their hands in the air) 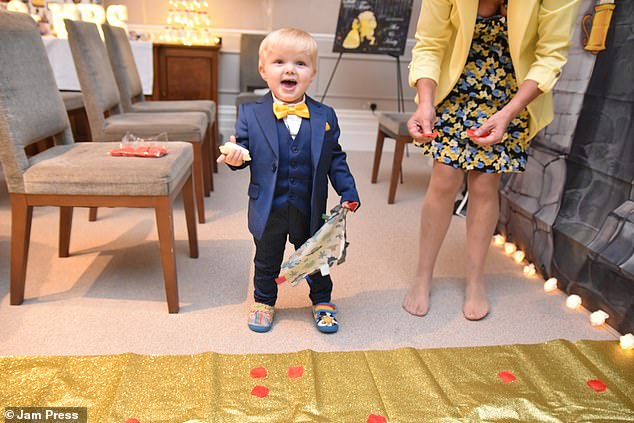 Kirsty had one wish and that was to go to Disney but she was too sick to leave the hospital (Pictured: Thomas at his parents’ wedding)

Alex described the wedding as ‘magical’ but felt devastated not to wake up with his wife next to him as she was too ill to leave the hospital (Pictured: Kirsty and her son, Thomas, a month before she lost her battle with sarcoma cancer)

‘The wedding was magical but when I woke up the next morning I just felt this sense of sadness.

‘I was so happy to be there with my wife and I just wanted to take her home and be with her forever, but I couldn’t. That felt devastating.’

Alex and Kirsty got engaged at Walt Disney World Orlando in 2019 after being together for 10 years. 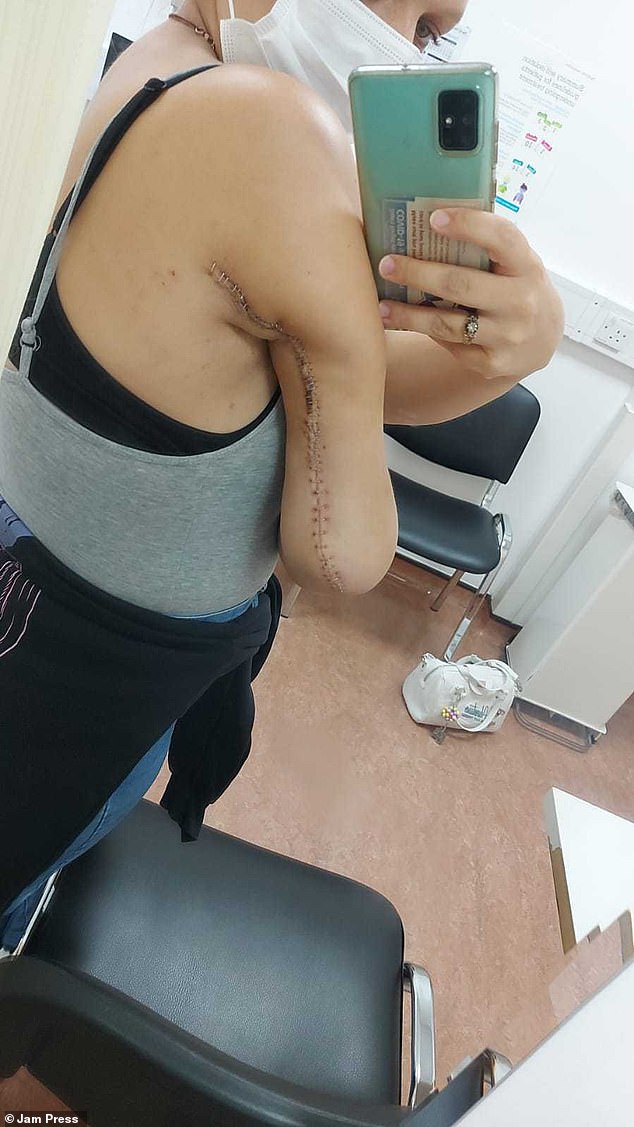 In April 2021, Kirsty found a lump under her arm but doctors told her it was ‘nothing to worry about’, Alex claimed. (Pictured: Kirsty’s arm after surgery in August 2021) 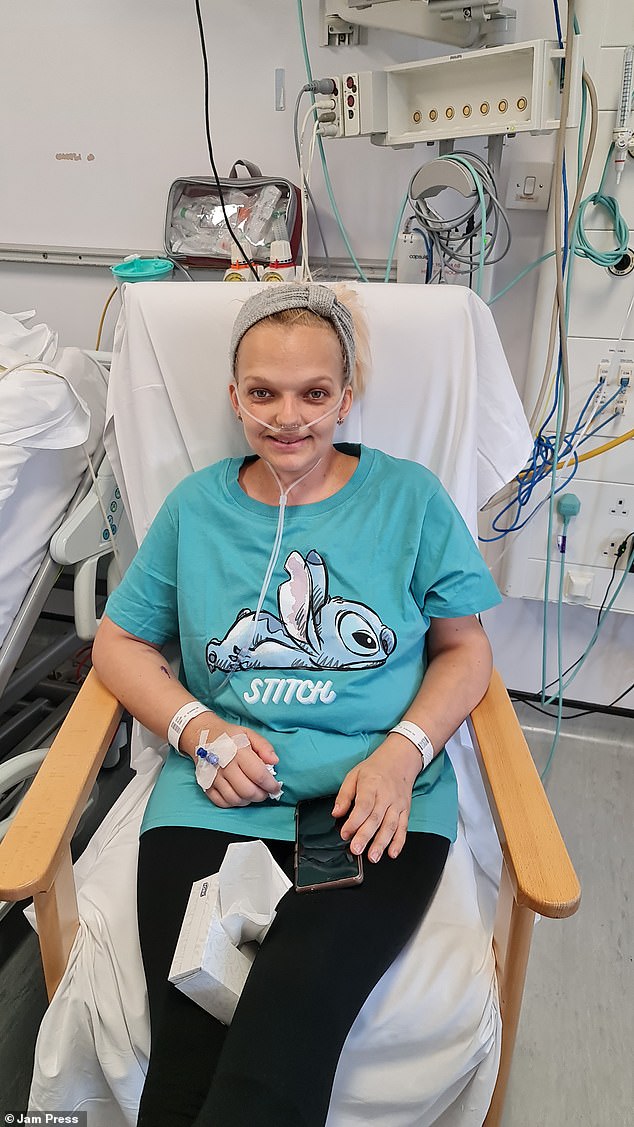 The tumor in Kirsty’s arm continued to grow to the size of a ‘rugby ball’ before she had to undergo six weeks of gruelling radiotherapy (Pictured: Kirsty, a month before she lost her battle with sarcoma cancer)

Two years later in April 2021, Kirsty found a lump under her arm but doctors told her it was ‘nothing to worry about’, Alex claimed.

The tumor continued to grow to the size of a ‘rugby ball’ before she had to undergo six weeks of gruelling radiotherapy. 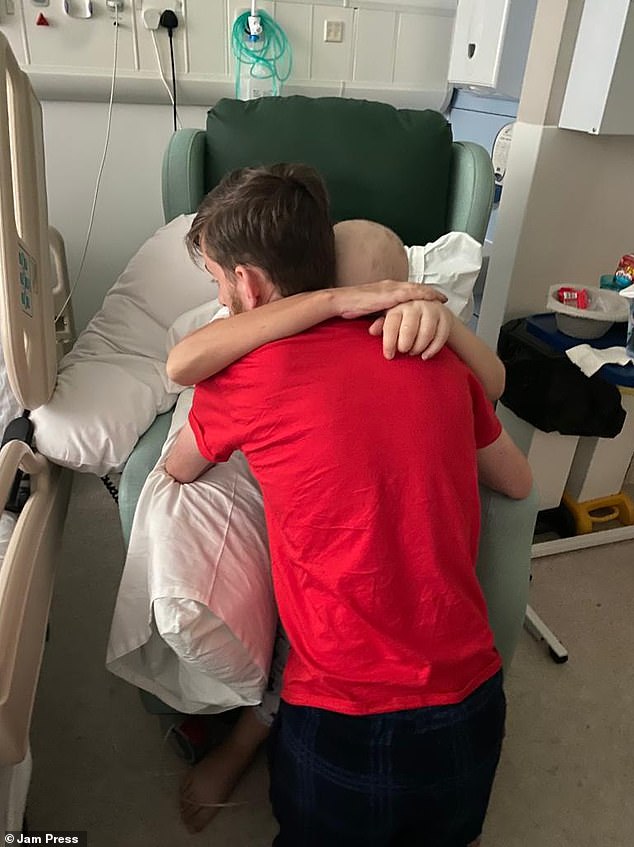 In September the cancer returned after doctors believed it had been laying dormant in her bloodstream (Pictured: Kirsty and Alex’s final hug) 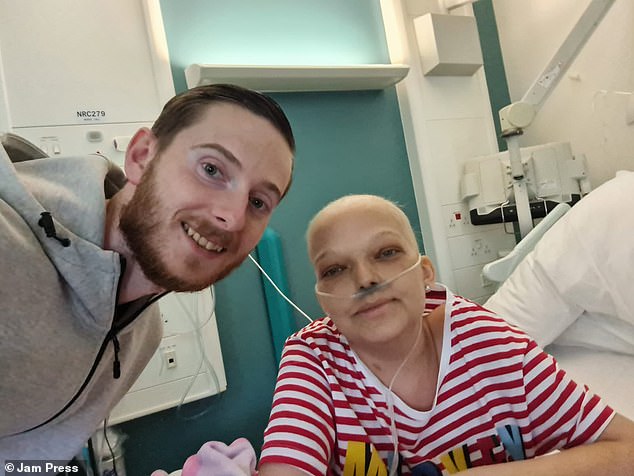 Alex (right) said he wanted to run away when Kirsty’s cancer returned and admitted ‘he will never forget the day’ the couple received the news (Pictured: Alex with his partner and wife Kirsty)

Alex said: ‘When they told us the cancer had returned, I just wanted to run out of the room and run away.

‘We had our son with us, and none of it felt real. I will never forget that day… I looked her in the eyes and I just started crying; I didn’t want to lose her and I didn’t want to believe it was happening.

‘Kirsty was so strong all the way throughout, and she only broke down once because she said she didn’t want to die in pain, she was a true warrior. 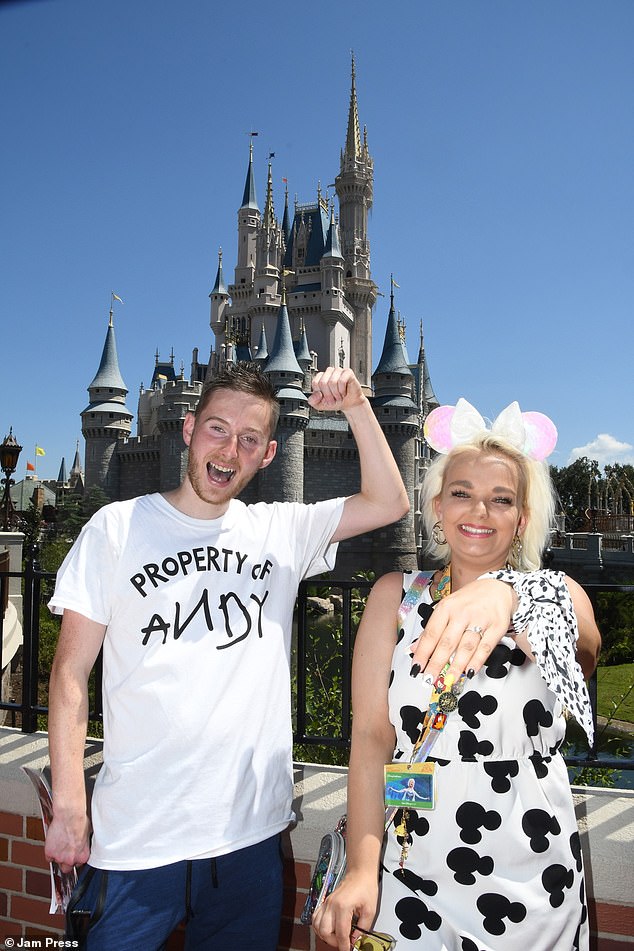 He said the news did not feel real as he was desperate not to lose his life partner (Pictured: Kirsty showing off her engagement ring after Alex proposed to her at Walt Disney World Orlando in 2019) 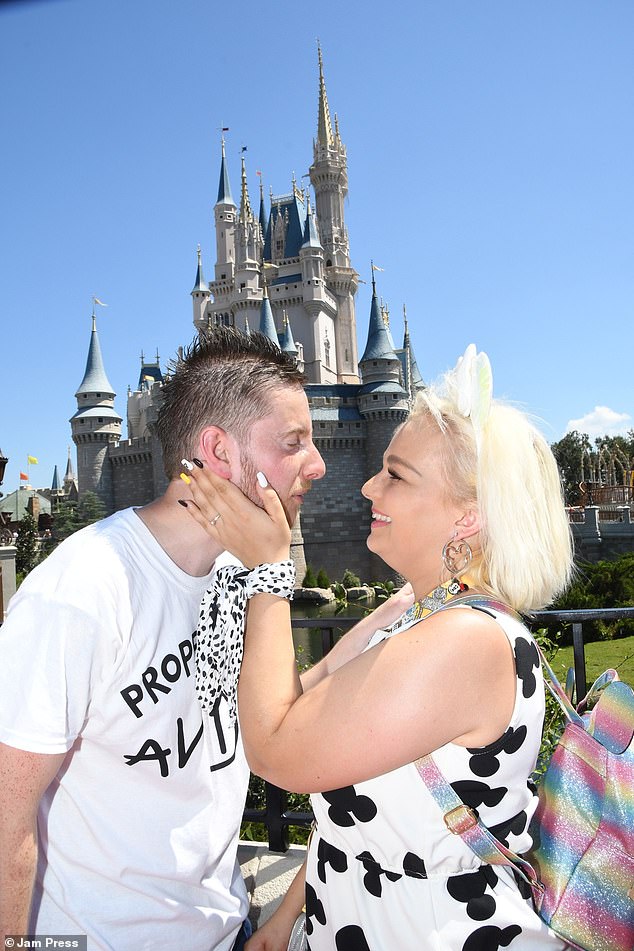 Alex (right) said his partner was ‘so strong’ and called her a ‘true warrior’ (Pictured: the moment the couple shared a kiss after they got engaged) 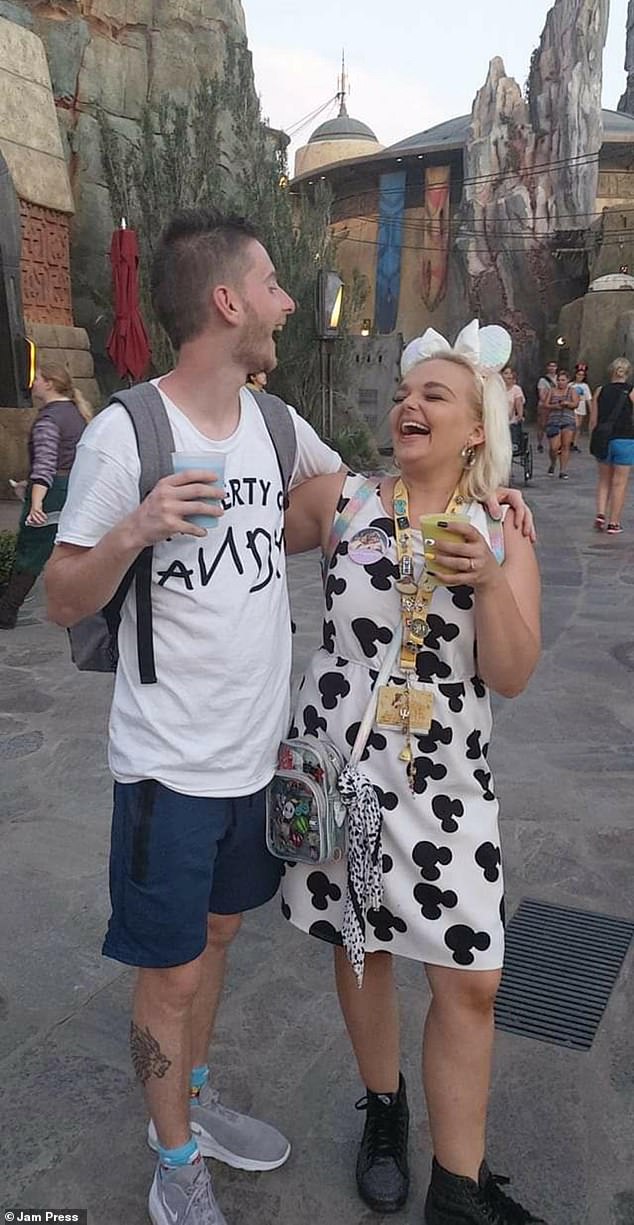 The father-of-one said he could not stop thinking about his boy, who would grow up without a mother (Pictured: The couple at Walt Disney Orlando) 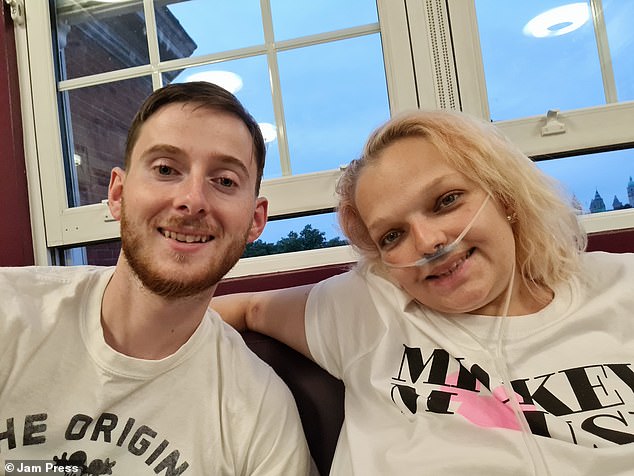 ‘I also couldn’t stop thinking about our boy Thomas… it was heartbreaking! No son should have to grow up without a mum.’

Alex set up a GoFundMe page to help raise funds to wed Kirsty at Disneyland Paris but the romantic plans were not possible after she could not leave the hospital.

The father-of-one arranged a Disney-themed wedding in ten days, with the couple exchanging rings on 2 October.

The father-of-one arranged a Disney-themed wedding in ten days, with the couple exchanging rings on 2 October (Pictured: Kirsty eating from a box of food while she was bed bound in hospital)

Alex wanted the room where they married to be packed with Disney ornaments (Pictured: Kirsty and her son Thomas) 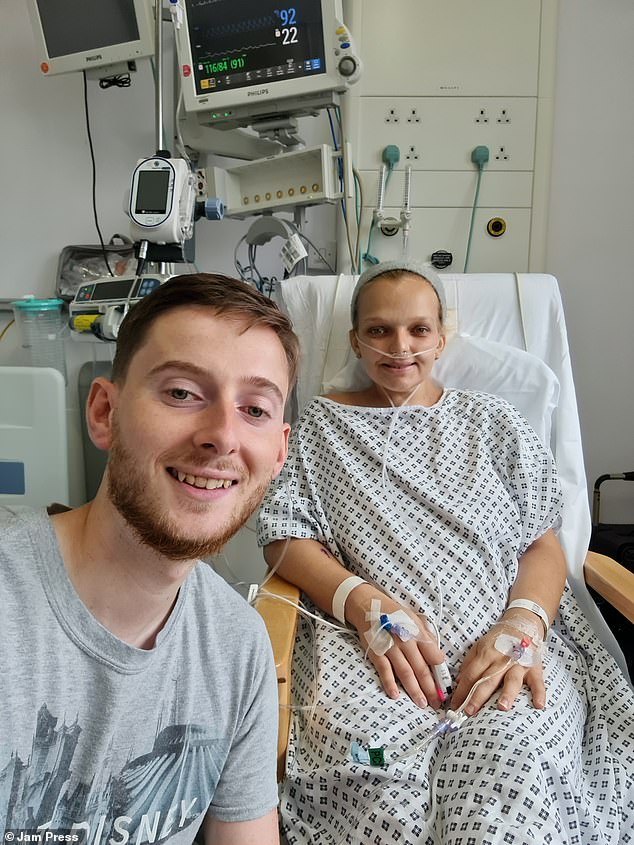 There were roses and a Disney-themed wedding cake on their special day to make it as ‘magical’ as possible (Pictured: Alex and Kirsty in the hospital)

Alex said:  ‘The whole place was covered in Disney ornaments, we even had a princess castle backdrop.

‘There were roses and even a Disney-themed cake, I just wanted to make sure the day was as magical as possible.

‘You could just feel the love in the room that day, for Kirsty and for us, it was just a memorable and magical day. 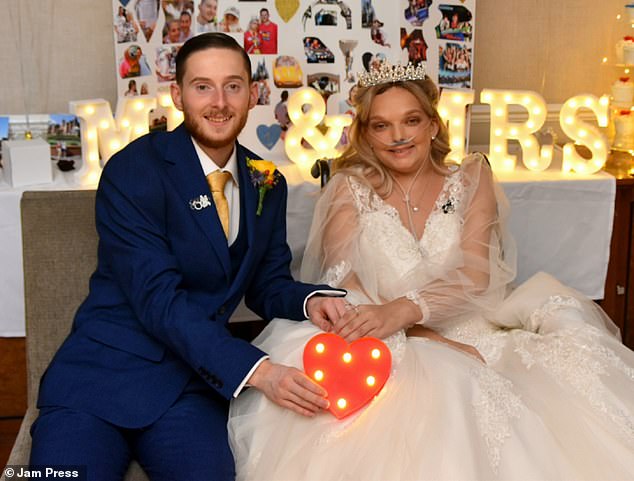 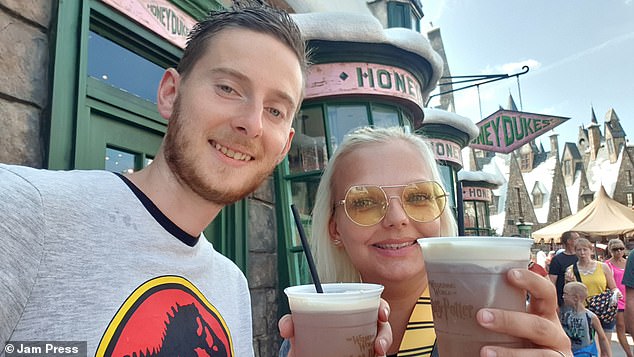 They live-streamed the event with many guests taking snaps and pictures of their big day (Pictured: the couple enjoying a drink outside Honey Dukes) 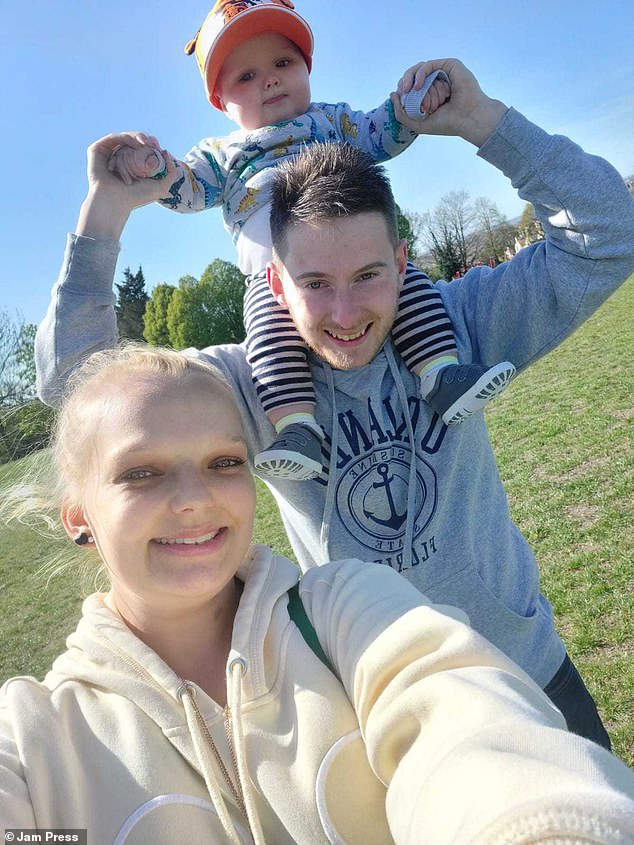 Alex said he will ‘cherish’ the pictures and videos of him and his wife on their wedding day ‘forever’ (Pictured: Kirsty, her husband Alex and their son, Thomas)

‘The dress was too heavy for her to walk down the aisle, so she had to be wheel-chaired in.

‘We live-streamed the whole thing and you can just see the happiness in Kirsty’s eyes when she is coming down the aisle… you can see it on her face.

‘I will cherish the pictures and videos forever, and it also means that when Thomas gets older he can look back on them too, and remember his amazing mum.” 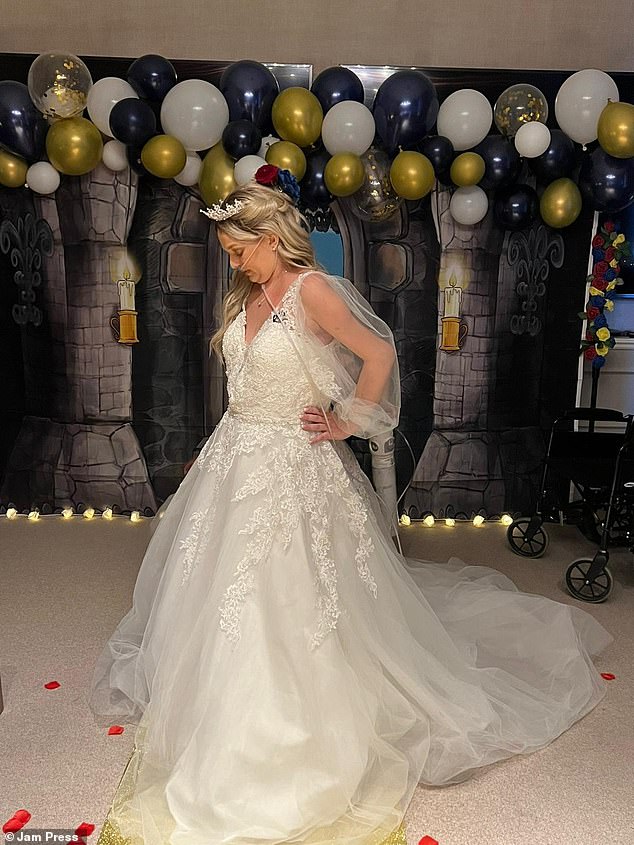 Photos of Kirsty (pictured) on her wedding day will mean Thomas can look back and remember his ‘amazing’ mum, according to Alex 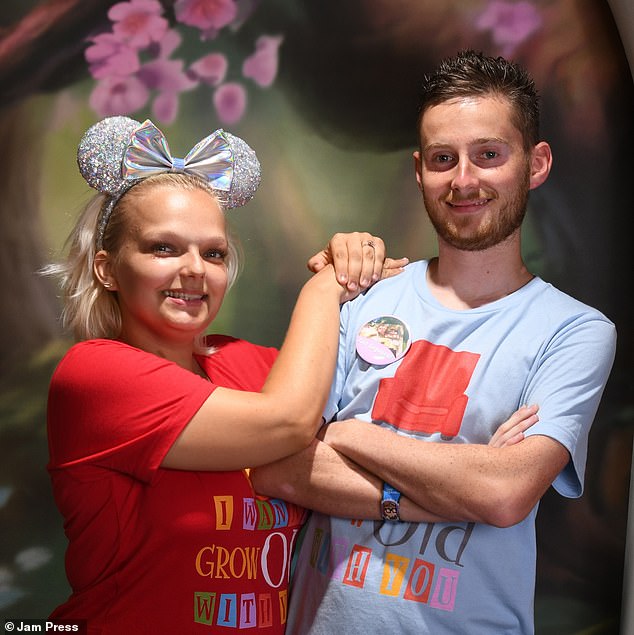 The widower (right) said his partner had a ‘sudden’ burst of energy before she died and was very chatty (Pictured: Kirsty and Alex) 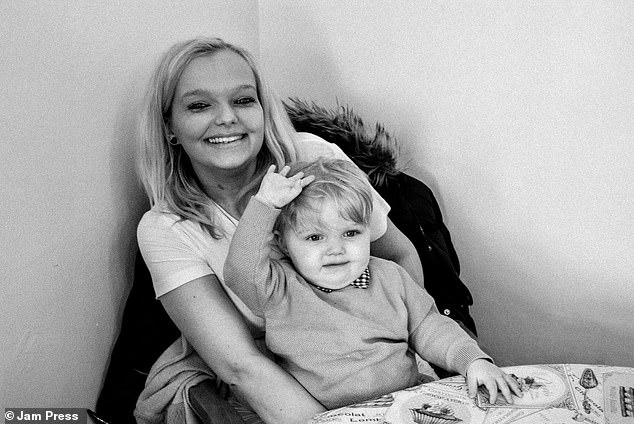 Alex said: ‘In the final minutes before she died, she had this sudden burst of energy and she kept talking.

‘Kirsty was telling everyone in the room that she loved them all, and she kept asking me for cuddles. We managed to take a picture of that final hug.

‘She looked at me and said to me that I gave her a good life, and also told me to find love. 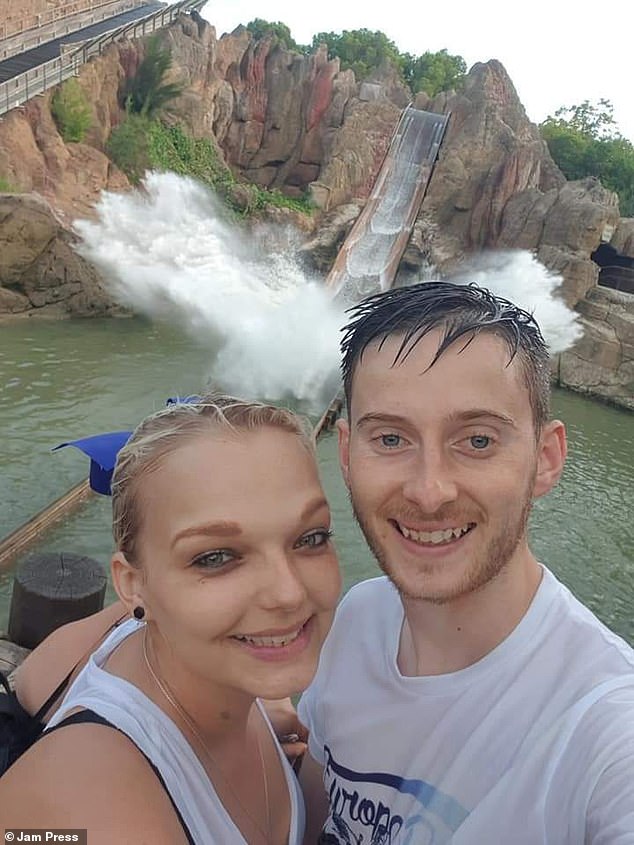 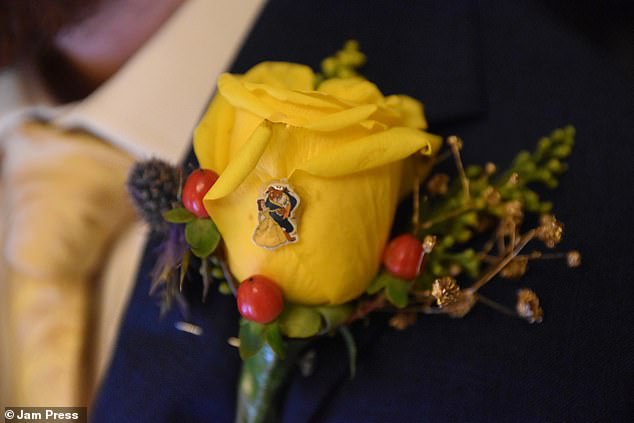 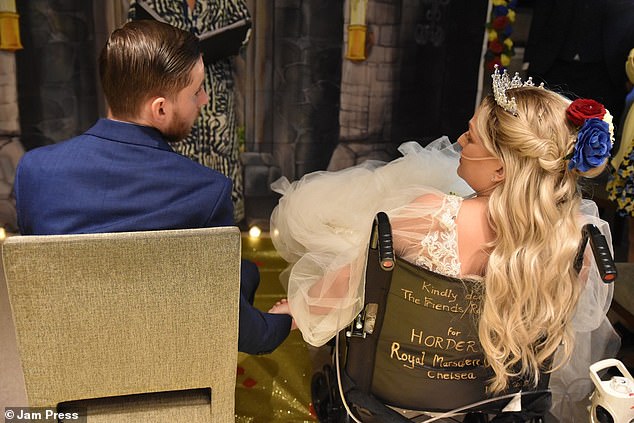 Alex said his wife’s cancer was extremely rare and there needs to be more research into it (Pictured: The couple at the alter) 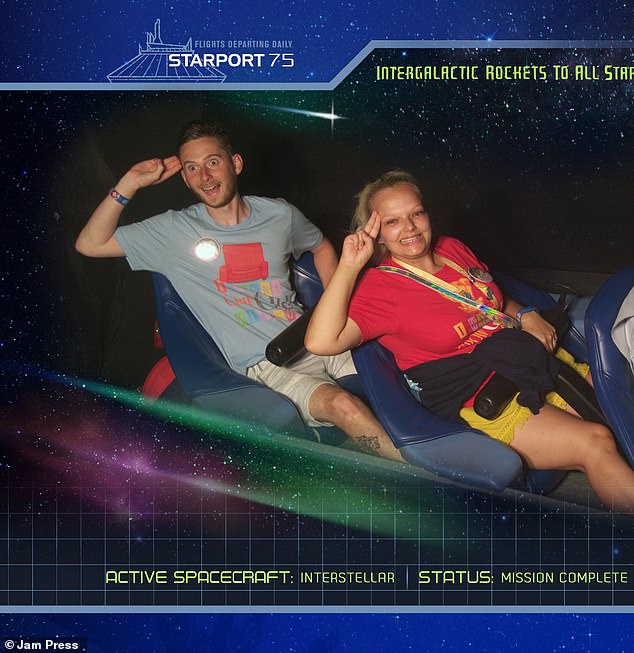 Next year Alex will be raising money for the charities which have helped Kirsty (Pictured: Alex and Kirsty on a rollercoaster)

Sarcomas are uncommon types of cancer which can grow anywhere in the body – on muscle, bone, tendons, blood vessels and fatty tissue.

Bone sarcomas are rare and affect approximately 670 people per year – but there are other types of bone cancers.

There are around 100 different types of sarcomas and about 5,300 people are year are diagnosed with them in the UK.

Sarcomas can be treated well if people catch them early, but many people do not get diagnosed until their tumours are about the size of a tin of beans.

Only slightly more than half of people with sarcomas (55 per cent) survive for five years or more after their diagnosis.

Symptoms of sarcomas can include bone pain, swellings or lumps, and restricted movement if it is growing near a joint.

Treatment may involve typical cancer therapies such as surgery, chemotherapy or radiotherapy.

‘In the end, she took herself off the oxygen and told me she was ready to go.

‘The worst part was leaving the room with Thomas, he kept saying ‘Bye mummy, see you later!’ and that honestly broke my heart. We both miss her so much.’

He added: ‘I want to raise awareness because there’s gonna be another young family out there like us, with no treatment.

‘There will be other families who will go through this and I wouldn’t want to wish this pain on anyone.

‘Kirsty’s cancer was extremely rare and there is no research into it, but there needs to be.

‘She loved life and lived life to the fullest, and I there will never be another one like her.

‘Next year I will be doing a fun run to raise money for the charities that helped us. Kirsty lost her fight, so now I need to fight for her.’