Mauricio Umansky arrives in Sydney without his Beverly Hills housewife

For the past twelve years, his wife’s social circle has played out on screen thanks to her role on reality series The Real Housewives of Beverly Hills. Now international property mogul Mauricio Umansky is taking centre stage in the harbour city – step aside Gavin Rubinstein!

Fresh off a superyacht in Portofino, Italy, the founder and CEO of international brokerage firm The Agency has landed in Sydney ahead of his speaking engagements for the Crown Group on Monday night. 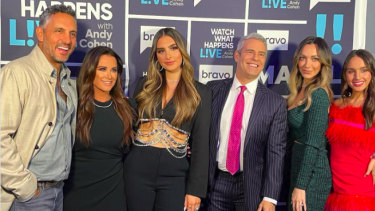 The father-of-three has sold upwards of $4 billion in property and represented some of the world’s most noteworthy properties and owners including the Walt Disney estate, Michael Jackson, Michael Jordan and Prince. Guests attending the intimate evening include business figures, media and influencers, who will hear Umansky explore his key tips for selling property, and secrets to his success.

Sources close to Umansky have remained tight-lipped surrounding his trip Down Under. However, Emerald City understands he will be travelling without his famous wife Kyle Richards. The reality couple tied the knot in January 1996. Prior to launching The Agency, Umansky was a real estate agent for his brother-in-law, hotel heir, Rick Hilton’s company Hilton and Hyland. 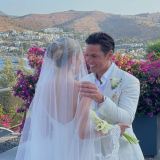 Eastern suburbs realtor Maclay Longhurst and his long-term girlfriend Jessie Davis have tied the knot in a chic European summer wedding. Last week the couple said ‘I do’ in front of their closest friends who travelled from Sydney to the exclusive Macakizi hotel in Bodrum, Turkey.

Ivan Bresic, cofounder of real estate agency BresicWhitney and Longhurst’s longtime boss and mentor, was the celebrant at the couple’s ceremony.

“I was extremely honoured to be asked to the celebrant. It was a wedding that was perfect. It meant a lot given Maclay and my history. I couldn’t be happier for the two of you!” Bresic shared on Instagram alongside a photo with the newlyweds.

Macakizi Hotel has fast become the go-to destination for Sydney’s social set. Earlier this month, Sydney influencer Nadia Fairfax-Wayne and husband Michael hosted friends and family for a ‘mate-moon’ at the palatial hotel where her godfather Andrew Jacobs is the hotel’s general manager.

After lapping up the Turkish sun, the couple took a private jet to Mykonos where they’re currently honeymooning with another couple.

Longhurst is considered one of Sydney’s leading real estate agents. Prior to his rise in the property world, he was photographed amid the crowds at the Cronulla riots as a 19-year-old behind a group of bottle-yielding men clashing with police.

Casey Burgess set to say ‘I do’ to beau Matt 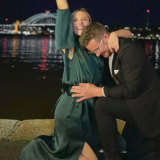 Australian starlet Casey Burgess is officially off the market after her partner Matt Meffen popped the question last week. Smiling from ear to ear the 33-year-old performer said her partner of a year and a half proposed on the water’s edge in Balmain.

“He surprised me with a ticket to Paris, were going in three weeks to go ring shopping,” Burgess told Emerald City.“I have no idea what kind of ring I want, I am just excited to shop for one together,” she added.

Meffen, 38, who works for a mental health app asked for her dad’s permission before popping the question.

“Dad said I kissed a few frogs before finding Matt”.

Having met on a dating app, the couple recently moved in together and the trip to France will be their first overseas getaway together.

“We met during COVIC so haven’t had the chance until now to travel together, I’m so excited I can’t wait,” she said.

Burgess is a regular fixture on Sydney’s social scene. She shot to fame in 2008 after joining hit children’s group Hi-5 before taking on a solo career as a country music singer.