Storytime with Meghan! Duchess dons casual blue shirt and jeans to read her children’s book The Bench from the garden of her $14 million mansion for YouTube story channel for kids

Meghan Markle cut a chic figure in a blue shirt and jeans as she appeared on a children’s YouTube channel to read her book The Bench today.

The Duchess of Sussex, 40, swept her hair into a slick bun and donned a relaxed blue shirt with a pair of jeans in the video, where she could be seen reclining on a seat in the garden of her $14 million mansion in Santa Barbara.

The video was shared on the Brightly Storytime channel, which is run by Penguin Random House, the publishing house which published The Bench and with which Prince Harry has a book deal.

Before she began reading, Meghan explained: ‘Today I’m going to be read to you my book called The Bench with illustrator Christian Robinson…I asked him to do something special for me and use watercolours, which isn’t the normal medium he works in but he did it to make it extra special.

‘I wrote this as a poem for my husband and our son Archie, and then turned it into a book so you could enjoy it too.’ 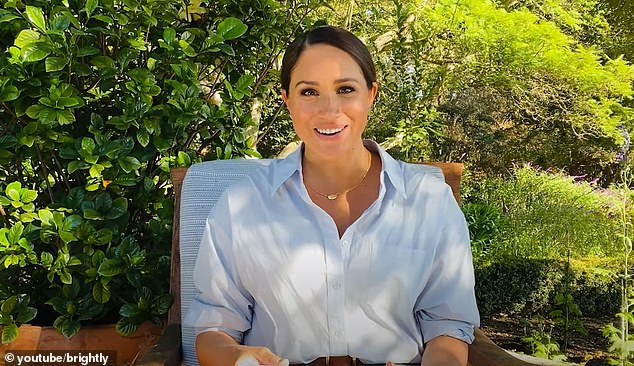 The Duchess cut a relaxed figure in the baby blue shirt for the video, pairing the look with a simple brown belt and a pair of jeans.

However Meghan has always been known to favor more conspicuous jewelry stacks, and today was no different.

On her left wrist, the former actress wore three of her favorite accessories – including the stunning gold Cartier Tank Française watch that belonged to her late mother-in-law Princess Diana.

The classic timepiece was thought to have been worth $23,000 when it was owned by Diana, however it is likely worth much more now, particularly given its history.

Meghan has always been known to favor more conspicuous jewelry stacks, while members of the royal family typically prefer to keep their accessories to a bare minimum.

Alongside the Cartier watch, the mother-of-two stacked a $6,900 Cartier Love bracelet – a design that she has worn many times in the past, and which is also thought to have been a gift from Prince Harry in the early days of their romance.

The Archewell statement in full: Meghan says The Bench is ‘modelling a new world’ by showing ‘another side of masculinity’

Meghan, The Duchess of Sussex’s debut children’s book, The Bench, is #1 on The New York Times Bestseller list for children’s picture books after being released just last week. Congratulations to everyone involved in the project.

The Bench started as a Father’s Day poem for her husband, Prince Harry, The Duke of Sussex, and expanded into a children’s book with imagery that captures moments of love and shared experiences between a diverse group of fathers and sons. Alongside the Duchess’s words are watercolor illustrations by Christian Robinson that bring the gentleness and joy to life.

‘While this poem began as a love letter to my husband and son, I’m encouraged to see that its universal themes of love, representation and inclusivity are resonating with communities everywhere.

‘In many ways, pursuing a more compassionate and equitable world begins with these core values.

‘Equally, to depict another side of masculinity — one grounded in connection, emotion, and softness — is to model a world that so many would like to see for their sons and daughters alike. Thank you for supporting me in this special project.’

While Meghan’s left hand and wrist bore the brunt of the weighty bling, she also added a single dazzling piece to her right pinky finger in the form of a custom-made ring that was reportedly designed for her using a diamond that she and Harry received from the Middle East, according to Page Six.

At the end of the clip, the Duchess can be seen closing the book, explaining: ‘I hope you enjoyed The Bench, I loved being able to share it with you.

‘And now I hope you’re able to go and find your own special bench, or chair, or little quiet nook.

‘Just a place that means something to you that you can share with someone you love. Have a great day and come back to Brightly Storytime soon. Bye!’

Meghan has claimed her children’s book The Bench shows ‘another side of masculinity’ in a message to thank readers after it became a New York Times bestseller.

In a statement on the Archewell website in June, the Duchess said: ‘While this poem began as a love letter to my husband and son, I’m encouraged to see that its universal themes of love, representation and inclusivity are resonating with communities everywhere.

‘In many ways, pursuing a more compassionate and equitable world begins with these core values.’

Meghan even went so far as to suggest that her book could be part of a blueprint for a new world, saying: ‘To depict another side of masculinity — one grounded in connection, emotion, and softness — is to model a world that so many would like to see for their sons and daughters alike.’

The Bench was inspired by a poem the Duchess of Sussex wrote for Prince Harry on Father’s Day, the month after Archie was born, and explores the ‘special bond between father and son’ as ‘seen through a mother’s eyes’.

And while the £12.99 title was the UK’s best-selling picture book last week after being released on June 8, it did not perform so well on the wider chart – but experts said it could still make a fortune by being sold worldwide.

Literary expert Tom Tivan told how the book’s German-owned publishers Penguin Random House Children’s have the rights to sell the English language version globally and could also sell translation rights to other publishers.

Mr Tivan, managing editor of The Bookseller magazine, told the Daily Mirror: ‘At a little over 3,000 copies (3,212 to be exact) sold The Bench is obviously not a huge bestseller in week one, it didn’t even make the top 50.

‘But I don’t think that’s a disappointment for Penguin Random House Children’s as picture books generally don’t sell huge amounts starting out – even if the writer is the Duchess of Sussex. 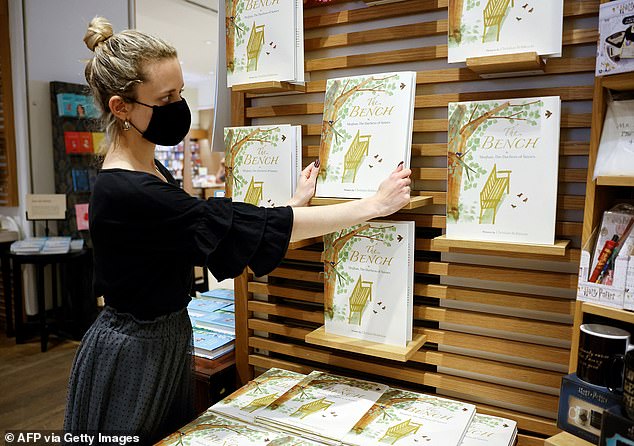 ‘The aim is the long game as picture books tend to have a longer shelf life than adult titles. The idea is to keep them selling week in and week out and is not about a quick hit.’

Early reviews for Meghan’s first foray into writing were not universally positive, although one cooed that ‘the book’s storytelling and illustration give us snapshots of shared moments that evoke a deep sense of warmth’.

Another described it as ‘soothing, loving, although a little schmaltzy in places’, while a third said it read ‘as if it has been penned as a self-help manual for need parents rather than as a story to entertain small kids’.

A further review said: ‘One wonders how any publisher could have thought fit to publish this grammar-defying set of badly rhyming cod homilies, let alone think any child anywhere would want to read it. 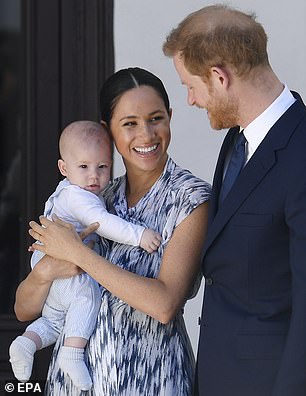 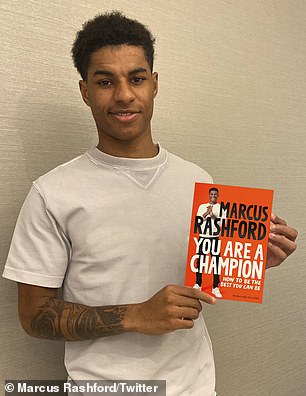 Meghan Markle (left, with her husband Prince Harry and son Archie in Cape Town in September 2019) saw her first children’s book fail to hit the UK Official Top 50 chart – being beaten by footballer Marcus Rashford’s You Are A Champion (right)

‘But that’s planet Sussex for you, where even the business of raising a family is all about the brand.’

Little Lilibet ‘Lili’ Diana Mountbatten-Windsor – Harry and Meghan’s second child, who was only born on June 4 in Santa Barbara – also features in the book, which was illustrated even before she was born.

An illustration shows the entire Sussex family in the garden of their Californian mansion. 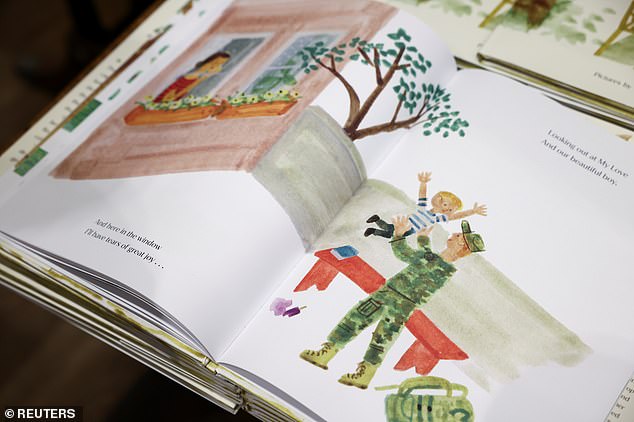 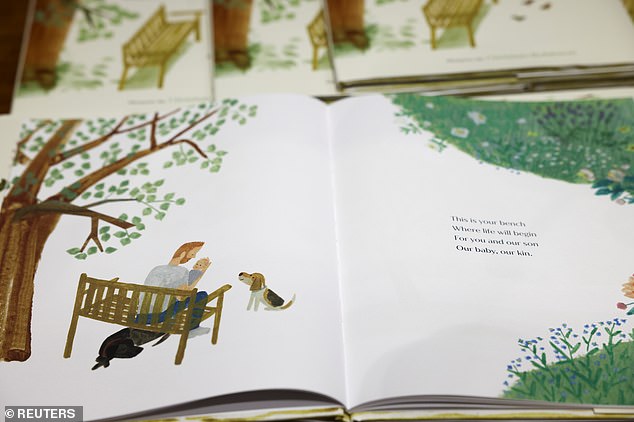 Harry can be seen feeding their rescued battery hen chickens – who also featured in the couple’s bombshell interview with Oprah Winfrey earlier this year – with son Archie, two, with their two dogs, beagle Guy and black Labrador Pula, running around in the grounds.

And Meghan can been seen amidst her vegetable patch with a baby in a sling around her chest.

Another illustration features a bearded ginger father – who bears a resemblance to the duke – cradling a smiling baby on a bench under a tree.

The text reads: ‘This is your bench, where life will begin, for you and our son, our baby, our kin.’ In another illustration, a father and son duo each wear pink tutus while performing ballet poses.

The accompanying words read: ‘You’ll love him. You’ll listen. You’ll be his supporter.’ 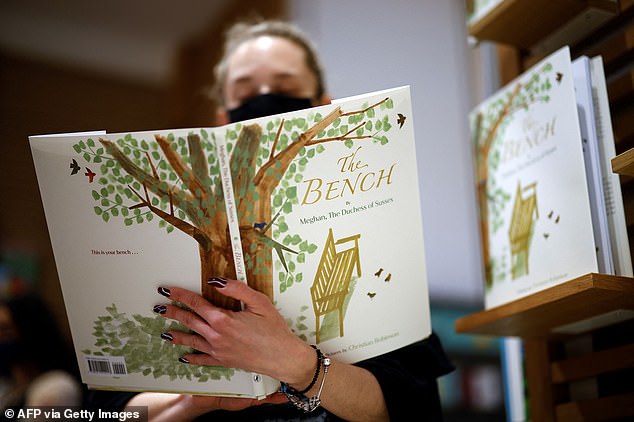 Early reviews for Meghan’s first foray into writing were not universally positive, although one cooed that ‘the book’s storytelling and illustration give us snapshots of shared moments that evoke a deep sense of warmth’ 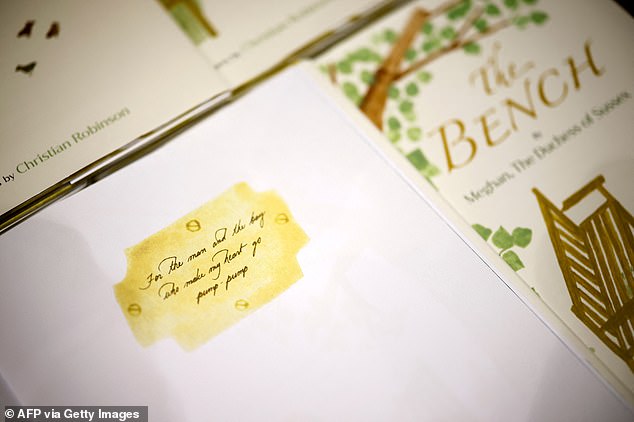 A touching inscription in the book by the Duchess reads: ‘For the man and the boy who make my heart go pump-pump’ 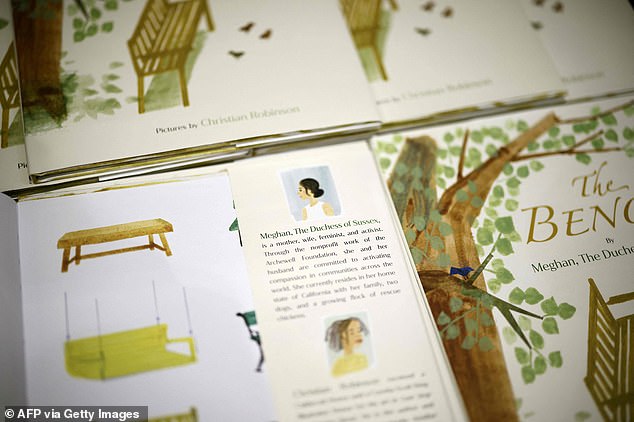 Alongside a picture of a father and son playing with toy dinosaurs, Meghan wrote: ‘When life feels in shambles, you’ll help him find order.’ A father using a wheelchair also features in The Bench.

He is drawn fixing his son’s shoes alongside the text: ‘This is your bench, for papa and son.’ It continues on the next page alongside a father and son wearing turbans: ‘To celebrate joys and victories won.’

A touching inscription in the book, reproduced from a hand-written note in the Duchess of Sussex’s distinctive calligraphy script, reads: ‘For the man and the boy who make my heart go pump-pump.’

It is not known if Meghan has received an advance for the book and whether any of the proceeds will be donated to charity.

Industry experts have suggested she could have commanded a £500,000 advance alone. The Bench is illustrated by bestselling Californian artist Christian Robinson.

appears, Markle, Meghan, on, YouTu
You may also like: