She means business! Meghan Markle wraps up in black coat, wide-leg trousers and £450 heels as she joins Prince Harry in New York for first joint public appearance since Megxit

Meghan Markle was elegant in a black coat and wide-legged trousers as she joined Prince Harry in New York for their first joint public appearance since Megxit today.

The Duchess of Sussex, 40, who is currently living in her $14 million mansion in California since stepping back from royal duty, joined her husband for the outing to One World Observatory.

The mother-of-two, who is known for her love of designer brands and rarely wears the same outfits twice, opted for a black tonal business style outfit for the occasion.

She donned a smart £874 Emporio Armani wool coat, popping the collar around her neck, with a matching turtleneck, black wide legged trousers and her favourite black suede Aquazzura ‘Purist’ pumps.

Meanwhile, she added a little glamour to her outfit by wearing a new diamond ring, which she paired alongside her new mysterious pinky ring.

It is believed the ring, made by celebrity jeweler Lorraine Schwartz and reportedly worth an estimated £45,000, was fashioned with diamonds gifted to the couple by a mystery donor in the Middle East. 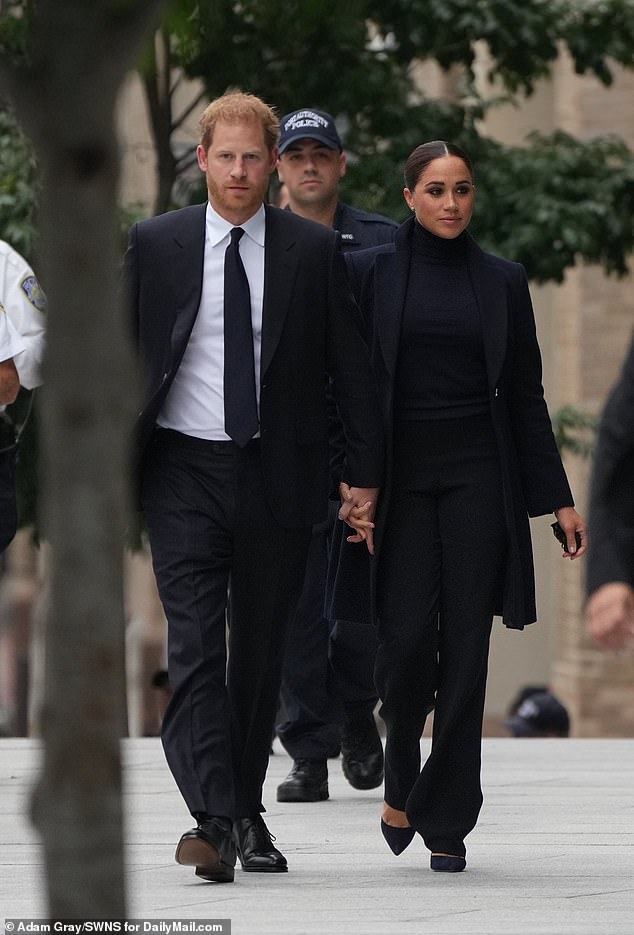 Meghan Markle, 40, was elegant in a black turtleneck and wide-legged trousers as she joined Prince Harry in New York for their first joint public appearance since Megxit today 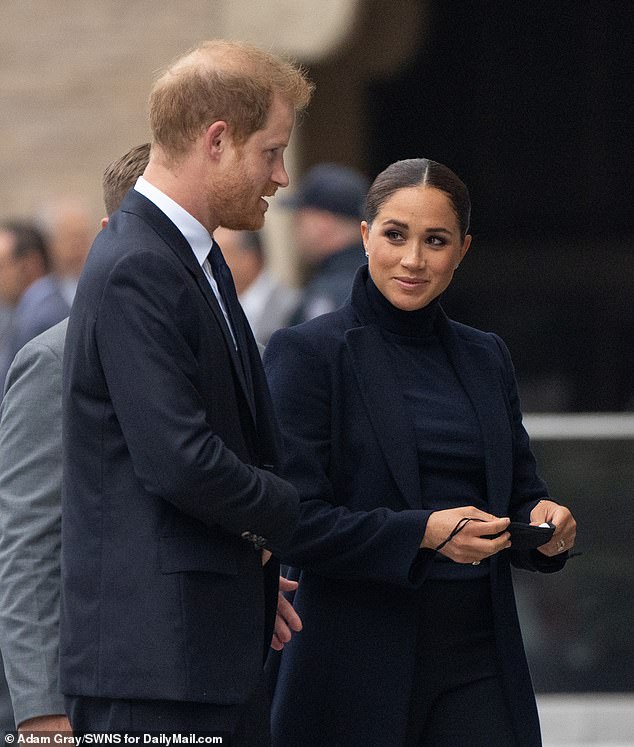 She swept her hair into a slicked back low bun, showing off a pair of diamond stud earrings

She donned a smart £874 Emporio Armani wool coat, popping the collar around her neck 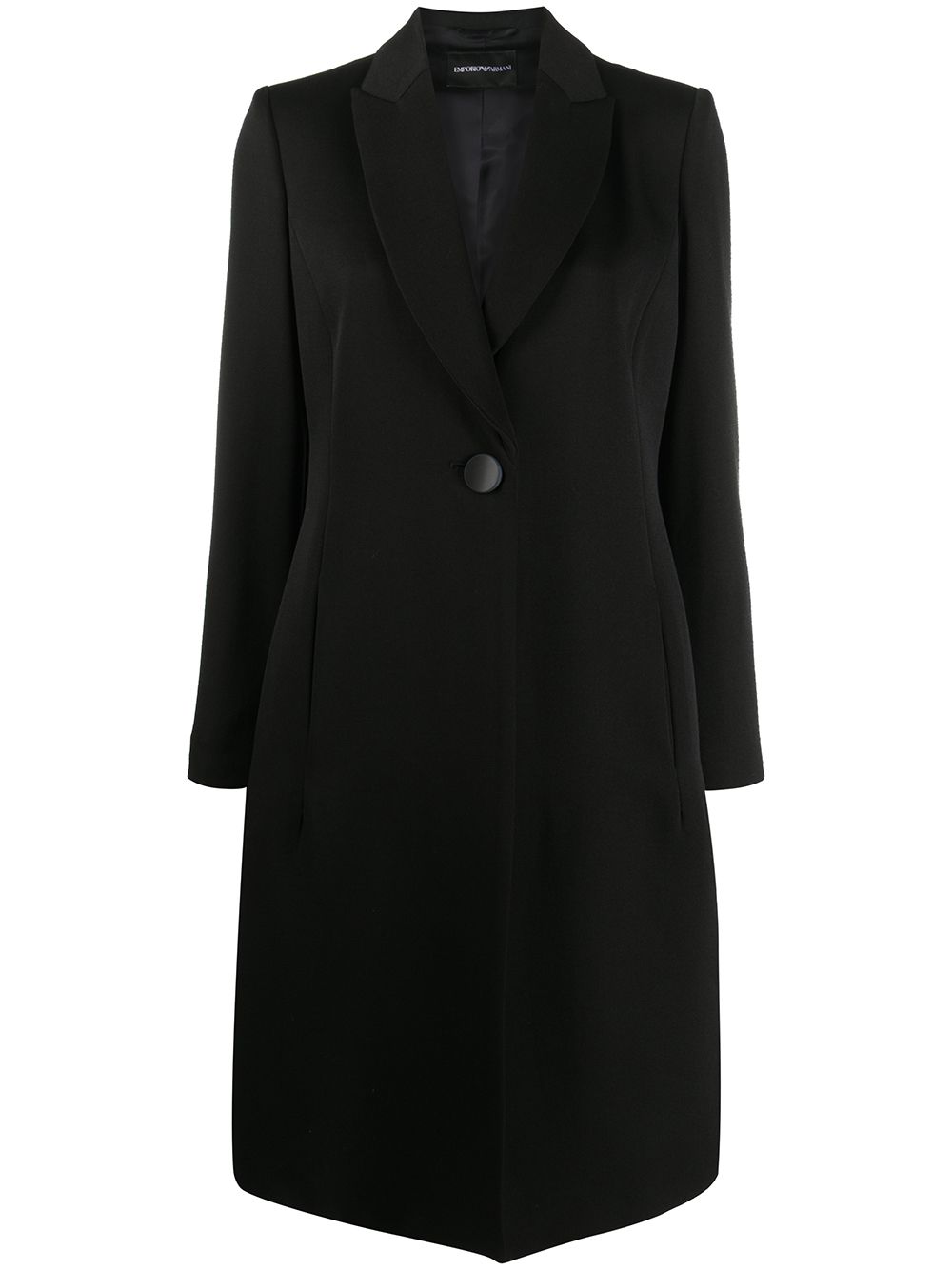 The Duchess kept her makeup natural for the occasion, sweeping a dark eyeshadow across her lids and pairing it with a nude lipstick.

Meanwhile, she swept her hair into a slicked back low bun, showing off her diamond stud earrings from Cartier.

Before she entered the building with the Duke, she could be seen holding a dark face mask in her hands. 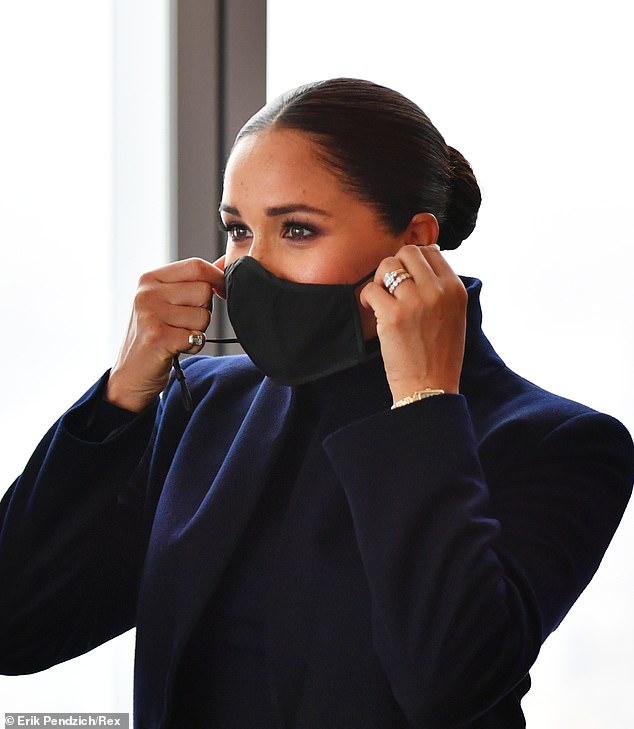 She added a little glamour to her outfit with a new diamond ring, which she paired alongside her new mysterious pinky ring 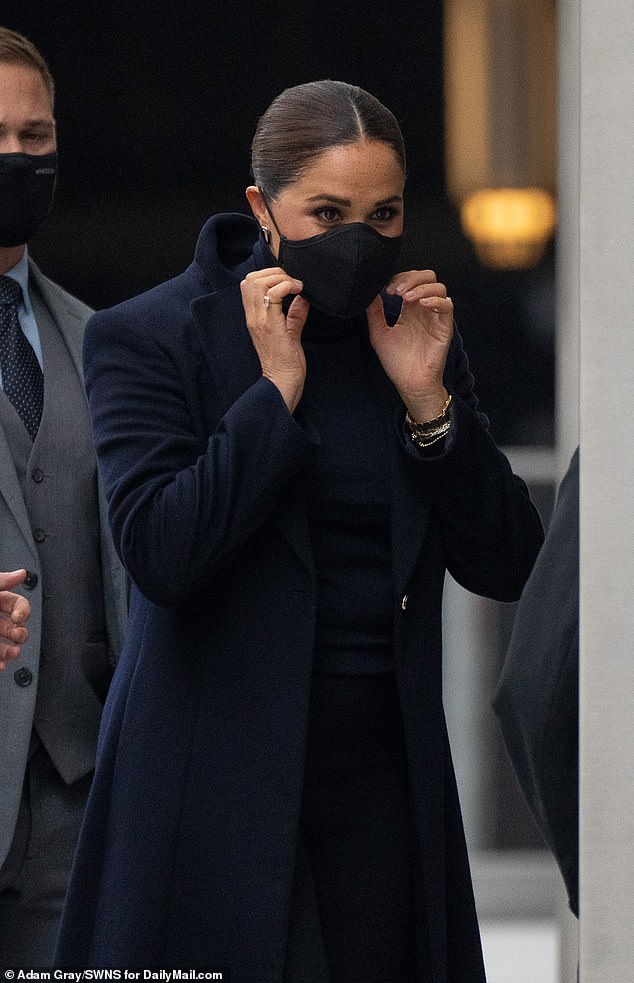 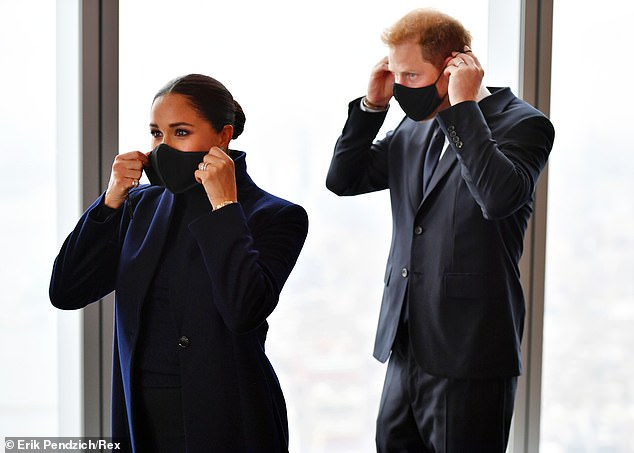 The couple later took the masks off inside to pose for photos with NYC Mayor Bill de Blasio, 60, and New York Governor Kathy Hochul, 63 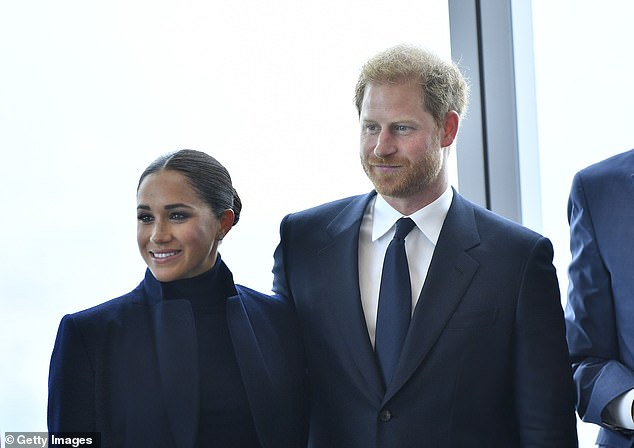 The couple arrived at One World Trade Center 14 minutes late for an 8am meeting Thursday in somber dark outfits.

They arrived in a black SUV, and were whisked up to the skyscraper’s viewing deck – which sits between floors 100 and 102 – to meet NYC Mayor Bill de Blasio, 60, and New York Governor Kathy Hochul, 63, who arrived minutes before them.

The couple held hands as the walked up the steps of the building, with Harry giving a wave to watching fans who shouted his name on seeing him.

No details on why the royals are meeting with the Democrat lawmakers and what they plan to discuss were shared in advance. 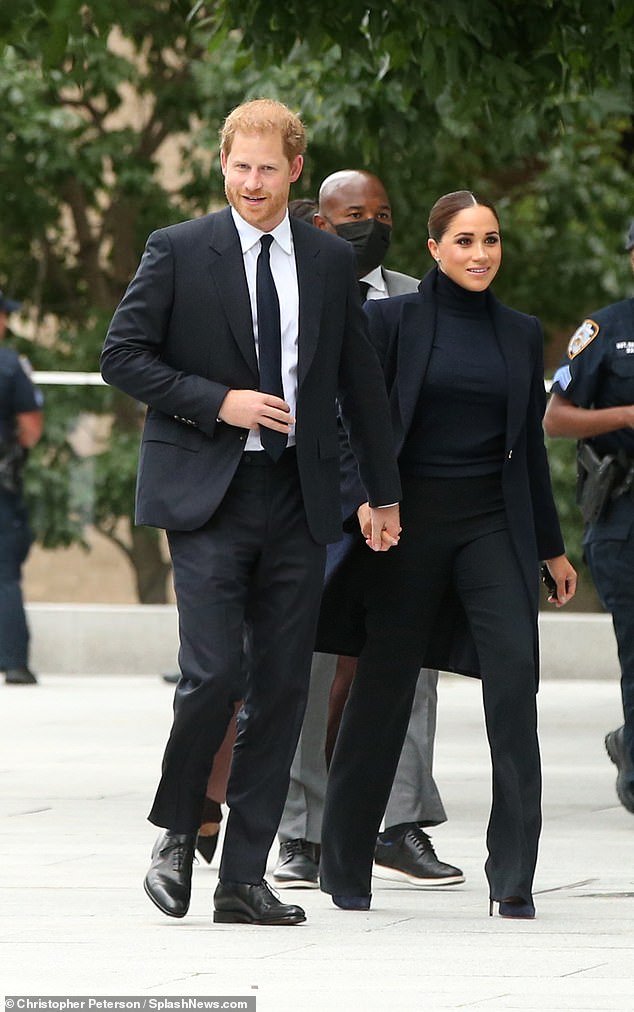 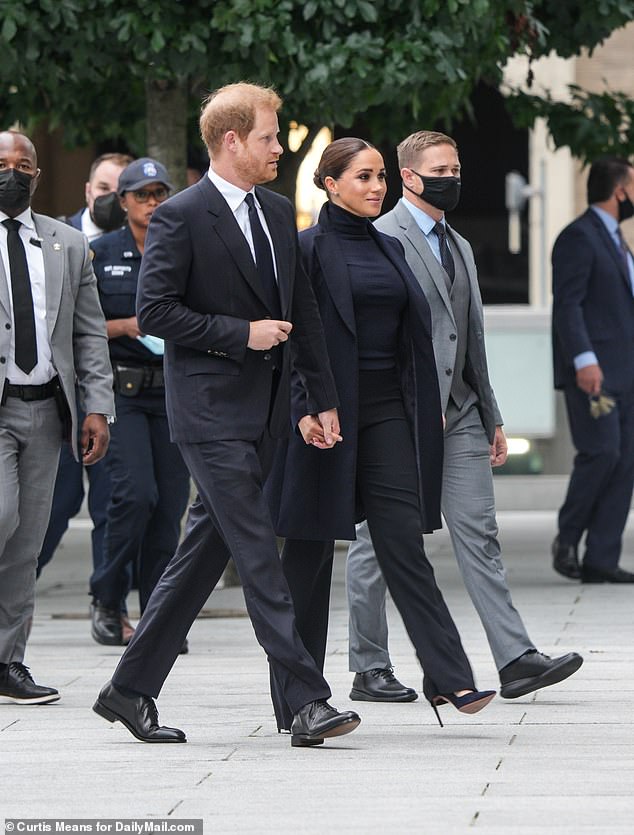 De Blasio’s wife Chirlane McCray, 66, and the mayoral couple’s son Dante, 24, were also there to welcome the royal couple, who are visiting from their home in Montecito, California.

A small group of taxi drivers protested the event to call on Mayor de Blasio to offer additional protection for elderly yellow cab drivers who’ve been hit by the rise in popularity of ride-hailing apps such as Uber and Lyft, with security also present to guard the royals and politicians.

Thursday’s visit is the Sussexes’ first public trip to New York City since their permanent move from England to Meghan’s native California in March 2020. 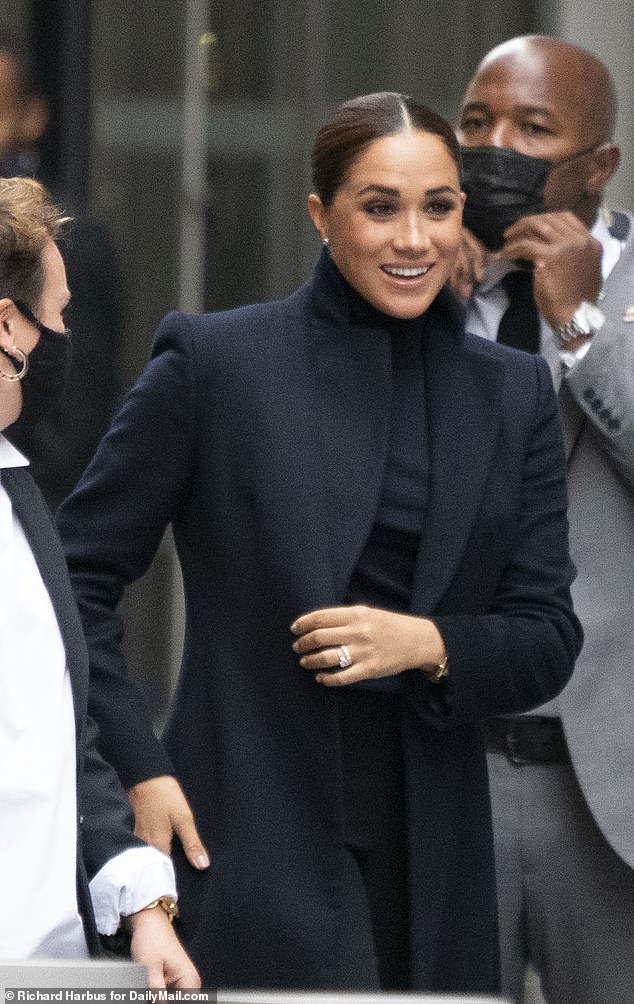 Harry and Meghan are also set to visit the memorial to the terror attacks after leaving the observatory.

Were diamonds from Middle Eastern gift that used for Meghan’s mysterious pinky ring?

Interest in the jewellery continues to overshadow the Duchess of Sussex’s appearance on the cover of Time magazine earlier this week.

Many were intrigued by a growing mystery surrounding the ring on her right pinky finger.

Initially, Harry and Meghan denied claims that the ring, made by celebrity jeweler Lorraine Schwartz and reportedly worth an estimated £45,000 ($62,000), was fashioned with diamonds gifted to the couple by a mystery donor in the Middle East.

They said the ring was sourced by a stylist on the shoot directly from the designer and that there was no link to a mystery donor in the Middle East.

But in a spectacular U-turn, they later rolled back the denial, and clarified that they were referring only to a ring on Meghan’s left hand – a £380 ($525) pinky ring from Shiffon, which is meant to represent women’s empowerment.

There was no further mention made of the Lorraine Schwartz ring in question on her right hand, begging the question of whether Meghan has something to hide about the provenance of the diamond, which was first seen on her finger in October 2020.

That will feature performances from artists including Coldplay, Lizzo and Jennifer Lopez, and will take place on the Manhattan park’s Great Lawn.

Harry, Meghan and other dignitaries are attending to draw attention to Global Citizen’s call for the G7 group of countries and EU to share at least 1 billion doses of COVID-19 vaccines with developing countries.

The music event will form part of a 24-hour broadcast from cities around the world, which also calls for vaccine manufacturers to waive their intellectual property rights on COVID shots.

Global Citizen Live and its supporters have further called for pharmaceutical firms to share mRNA technology used to develop the vaccines with a World Health Organization-backed medical hub based in South Africa.

Harry and Meghan have become heavily-involved in philanthropy since sensationally quitting the Royal Family in January 2020, after complaining of the pressure-cooker environment and life in the spotlight.

The couple have also signed huge deals with Netflix and Spotify, rumored to be worth a combined $125 million, to produce content for the streaming and podcasting giants.

Today’s event also marks the return to work for the Duke and Duchess, who have taken several months off following the birth of their daughter Lilibet in May.

The Duchess celebrated the impending birth of her firstborn son Archie by flying to the Big Apple by private jet in 2019, provoking outcry with the five-day baby shower celebration. Around 20 friends attended, including Serena Williams and Amal Clooney.

Months later, she visited the state again for a flying trip away to support her close friend Serena Williams in the US Open final.

I, is, Markle, Meghan, understated
You may also like: